I thought I would make a few comments on what I found most interesting from the latest news out of Irving Resources.

The biggest positive from the recent news release in my eyes, is that they were able to hit the mineralized trend as well as notable vein intervals, in all holes (That’s a 100% system hit-rate):

“All eight drill holes have intersected long intervals of highly altered volcanic and sedimentary rocks. Notable vein intervals have been intersected in all holes.“

Furthermore, the system system strike is already up to 1km:

… That fact is even more impressive when taking into account that the 1km strike covers both North Omu Sinter Target as well as South Omu Sinter Target, which were two targets that were divided by a cross-cutting fault as per this slide from a previous NR: 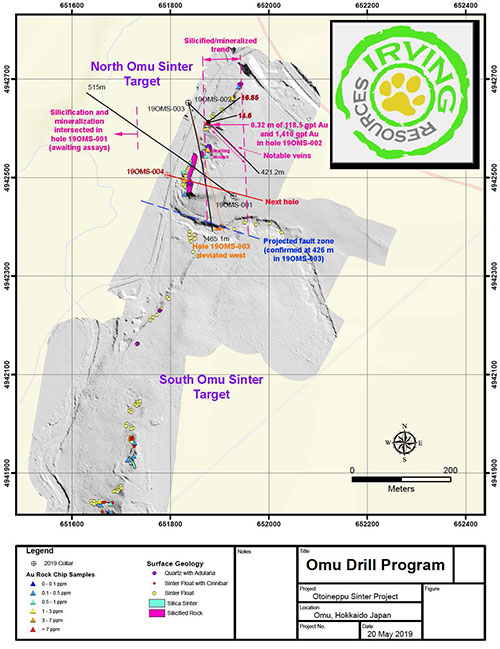 I was honestly not even sure if Irving would be able to locate the continuation of the system, to the south, past the cross-cutting fault. Not only did they locate the displaced part of the system past the fault, but they did it right away, with two big step out holes both intersecting the mineralized trend: 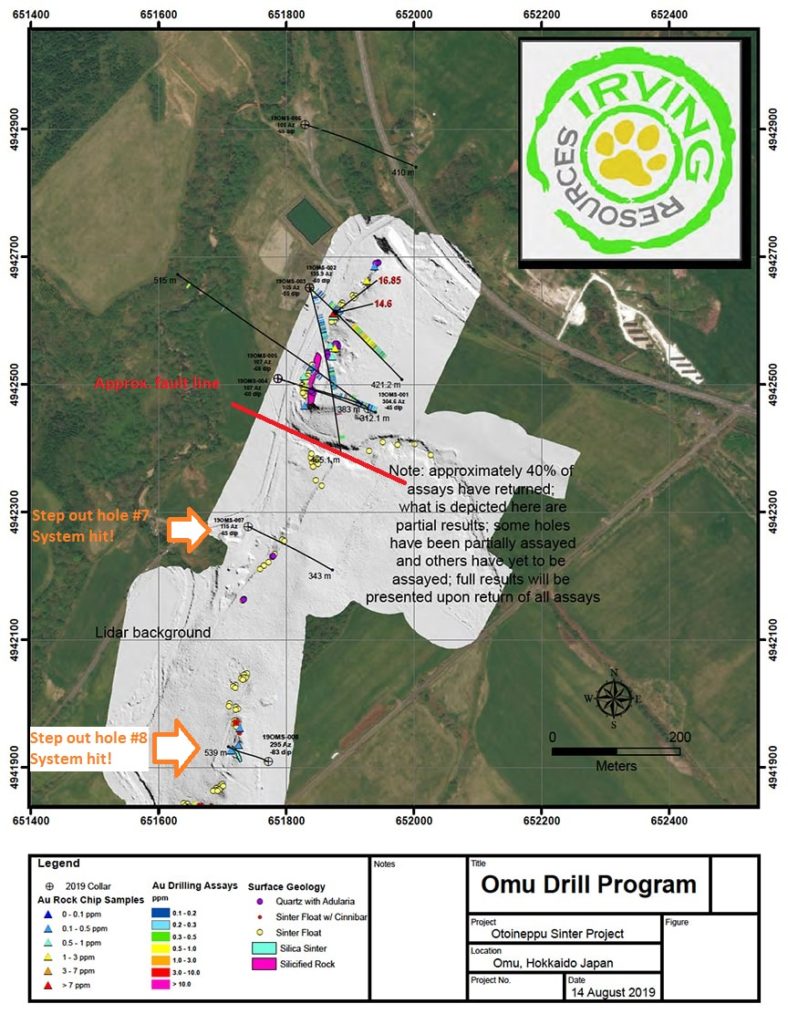 Drawings added by me.

… Note that the “North Omu Sinter Target” and “South Omu Sinter Target” labels are not present in the slide above from the latest NR. I assume that is because the continuation has already been proven and that there is no need to treat them as separate targets, but rather a single, coherent target/prospect. Also note that the Omu Sinter target is still open in both directions (north and south) since the step out holes to the north as well as the south were able to hit the mineralized trend. In short: Omu Sinter is up to 1km of system strike and open in both directions.

How were they able to locate the southern part of the system so quickly? I don’t know, but I guess Newmont’s tech might be as efficient as Quinton stated in an interview with Kereport.com. Namely that he believed that they would be able to target the vein systems with “laser surgeon precision” (something like that).

There were also some new assay results included in the NR:

… Which I would consider good given the fact that Irving is yet to drill the REAL target, namely the boiling zone: 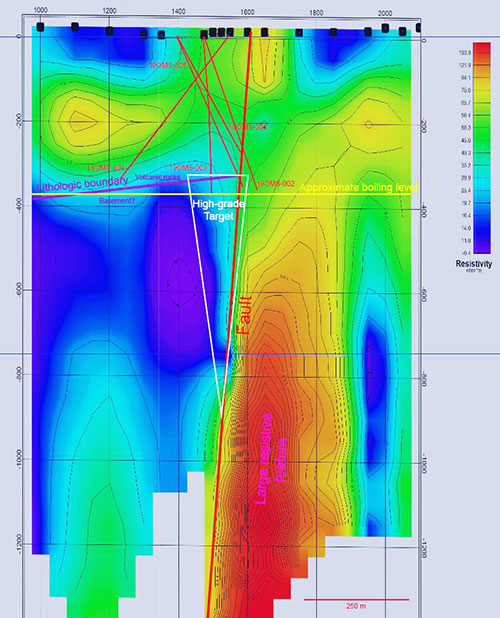 … As you can see in the slide above, and which has been stated by Irving in a precious NR, the boiling zone (main target horizon) is expected to start at around 380m vertical depth. This would mean that none of the so far reported high-grade assays are even from the main target. In an epithermal gold system, the gold starts precipitating out of the hydrothermal fluids in a hurry, as soon as boiling is possible. This means that as the fluids race towards the surface, the gold (and silver) content in said fluids rapidly decreases.

Irving’s current hypothesis is that the second gold-rich event was not able to use the same plumbing as the first silver-rich event and that most of the gold-rich fluids might have been trapped below. This is why Irving believes that the gold-rich fluids might have been forced to spread out laterally, around the hypothesized “lithological boundry”, as can be seen in the slide above. When the drilling equipment (which has been delayed but is now on the way) is finally on site, Irving will test the theoretical boiling zone up to 700-900m at depth.

Irving has already encountered high-grade precious metals intervals and they have yet to drill into the real prize, the assumed boiling zone. The 135 gpt AuEQ intercept was located at a vertical depth of about 150m for example and Irving plans to drill down to depths of around 700-900m, so I think you get the idea of what kind of potential there is for Omu Sinter. Not only that, but the system strike is already up 1km and the system is open in both directions. Keep in mind that Omu Sinter is just the first target out of four targets to be tested within the greater Omu Project. Trenching is already well underway at Omui in addition to; a) Drilling at Omui later this year, b) Currently ongoing CSAMT survey at Omui, c) Mapping, prospecting and soil sampling which will soon commence around the historic Hokuryu high-grade vein mine and nearby extensive Maruyama sinter terrace, and d) Phase one drilling at Hokuryu and Maruyama in mid 2020.

Suffice it to say, I expect Irving to be one of the most news heavy juniors around for the foreseeable future.

(There was more information in the latest news release than the things I have covered in this article so I would encourage people to read it.)

Lets end this article with some pictures from the ongoing trenching/bulk sampling program at Omui mine site: 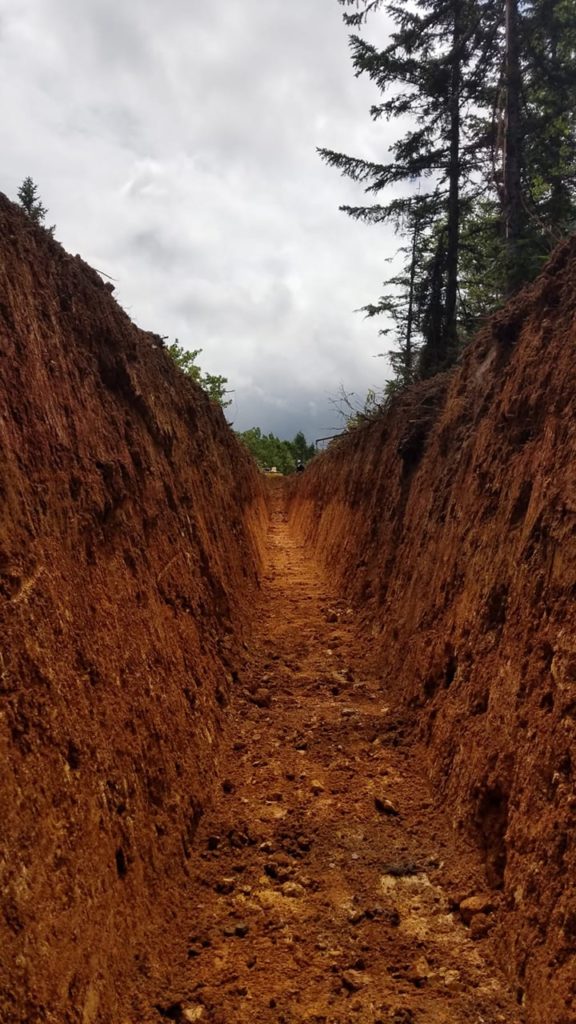 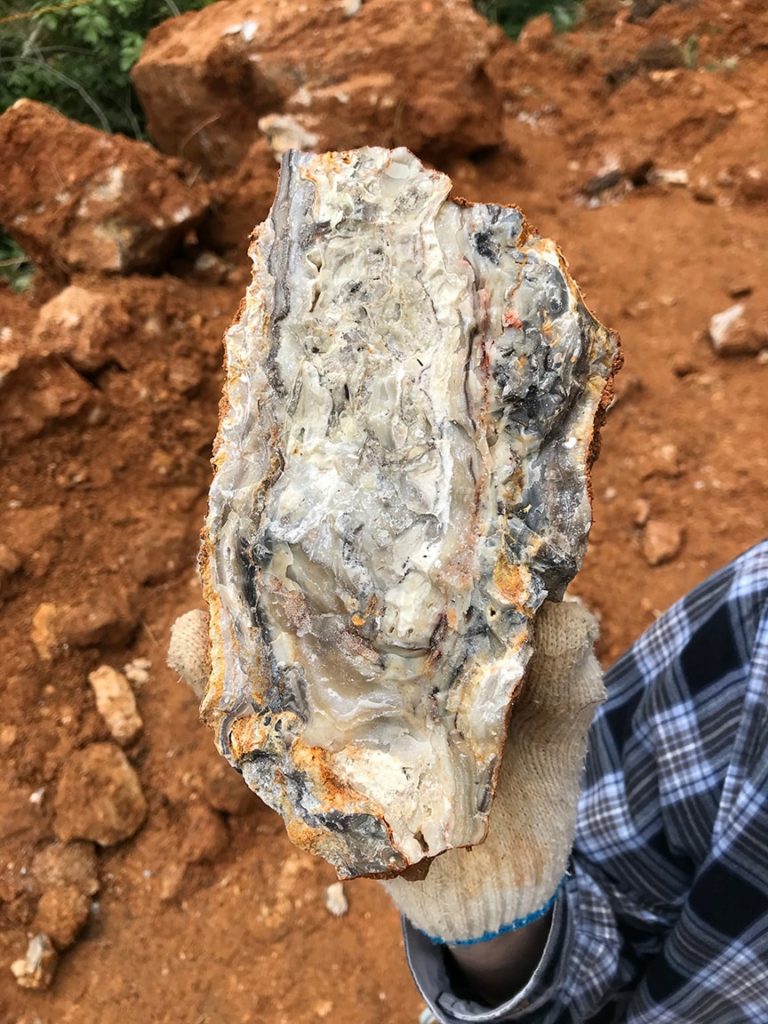 (Note: This is not investment advice and I am not a geologist. I can’t guarantee 100% accuracy in terms of the content in this article. Always do your own due diligence. I personally own shares of Irving Resources which I have bought in the open market and I am probably biased.)