(Note: This article includes a lot of speculation personal and forward looking statements. Always do your own due diligence. I am merely, as always, trying to explain my own personal thoughts and views. I am not a geologist, mining engineer or an investment advisor. I am just a curious guy with too much time on my hands it seems. Novo is a banner sponsor and I am very long the stock.)

Context for this article:

My main take aways from the recent interview and News Relase:

(Comments by me in italic)

Egina has lately become the main focus for Novo Resources and it is starting to show why that is. First of all, this looks to be as shallow as it gets for a potential gold deposit. It was stated in the News Release that the overburden looks to be only 0.2m thick, which means that only around 20cm might need to be removed before the actual pay zone starts. Furthermore, this is a free dig, loose, gravel horizon so no blasting etc will be required. Basically it’s an earth moving operation that should require very little CAPEX and OPEX. The main technical issue is probably access to water. Well, Novo has been looking at processing options for some time now and are currently looking at possibly using Eddy-Current Seperators, which requires no water. It’s kinda like a less advanced sorting machine (Think Tomra ore sorters which have shown remarkable trial results at Comet Well):

This solution might work very well because according to Quinton, over 95% of the gold content looks to be made up of coarse gold, which is perfect from a processing point of view. This solution is typically used to process waste material as far as I understand. If that’s worth it (profitable), I wonder how profitable it might be when sorting out almost pure gold out of gravel? Regardless, the possibility of being able to do dry processing would be a very big deal as it eliminates one of the main obstacles.

Many people might start to think about the obstacles of coarse gold as it relates to Comet Well for example. However, the beauty of Egina is that a) It’s not hardrock and b) it’s not under several meters or more of hardrock overburden. Why does that matter? Well, that means that in the case of Comet Well, one would need to incur costs to blast and remove a lot of hardrock to confirm the presence of gold in the underlying (extremely coarse) conglomerates. Remember, the fine gold at Comet Well is primarily limited to the nugget halo, which is only a few millimeters away from the nuggets. In contrast, Novo could simply dig a shallow ditch anywhere around Egina and quite readily confirm any presence of gold. Not only that, but Novo is also using Ground Penetrating Radar equipment to map the gravel horizon(s). The current hypothesis is that the best gravel horizon will be located in the “swales”, or depressions, at Egina as can be seen in this video (blue = depression):

Remember, this was “blind” trench and yet they detected nuggets all through the almost 600m long trench. As you can see in the video, the depression (“swale”), looks to be expanding towards the east: 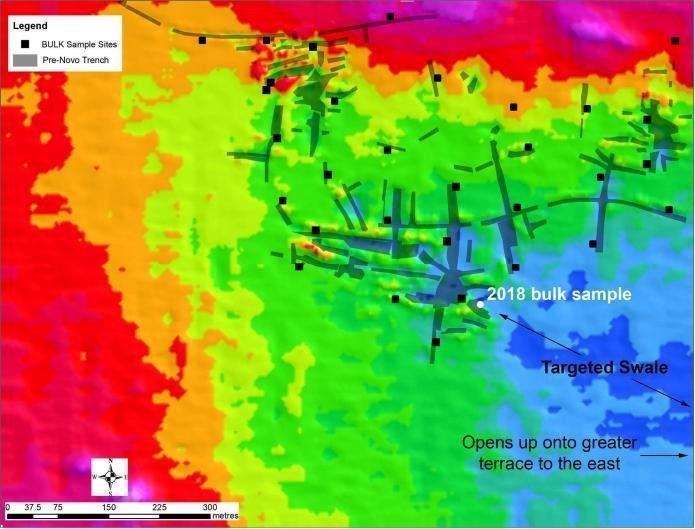 This is exactly what Novo hoped to see, since it is the direction towards the “greater terrace”, which is a huge where the land is flat like a pancake as you will see in the next slide. Furthermore, this quote from the news release is KEY:

“Nuggets were found scattered along the entire length of the 579 m long, 3.65 m wide north-south oriented trench, but most were recovered from a 50 m long interval within a swale, or topographic depression, in underlying basement rock as identified by ground penetrating radar (“GPR”) near the northern end of the trench. This swale is open to the east where it appears to expand out onto the greater terrace“ 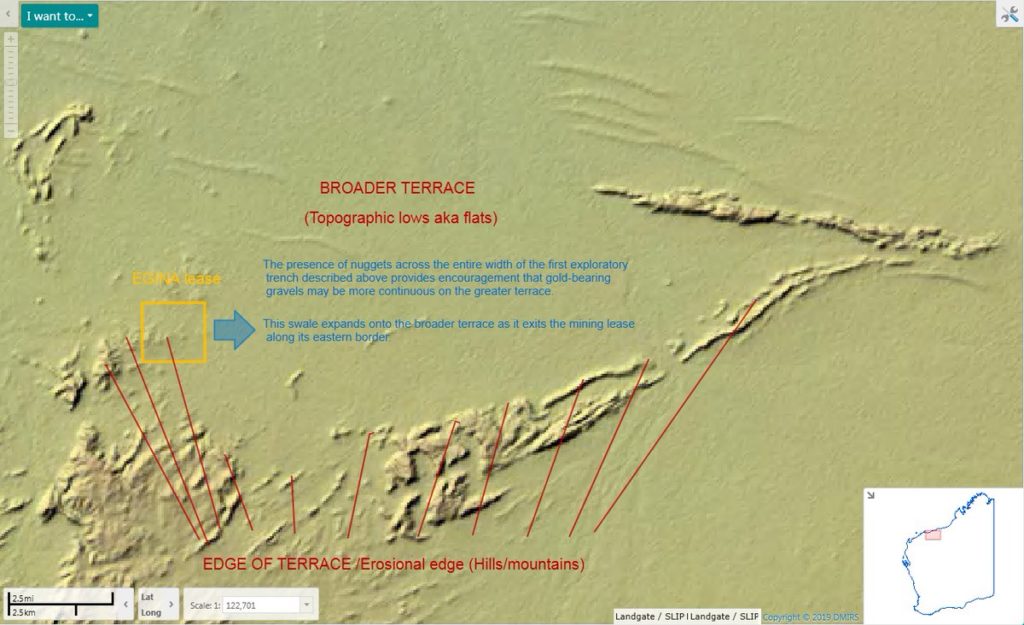 … As you can see, that is an immense and very flat area. The reason why it is flat is because some million years ago the ocean came in and cut/flattened out thousands of square kilometers between Egina and the modern coast. The Egina Mining Lease, which can be seen above in yellow, is at the edge of the “erosional front” and is the location of Novo’s 600m trench. Remember, the swale/depression is broadening out to the east which means it is broadening out into the area where the oceanic processes hammered the land for a long period of time. This meant that any gold which was hosted in rocks younger than the underlying Mallina Basin sediments was freed and deposited all over this area by the sea. This could potentially include gold hosted in Mt Roe conglomerates, Hardey Formation conglomerates and any other hardrock gold occurrences which litters the area. 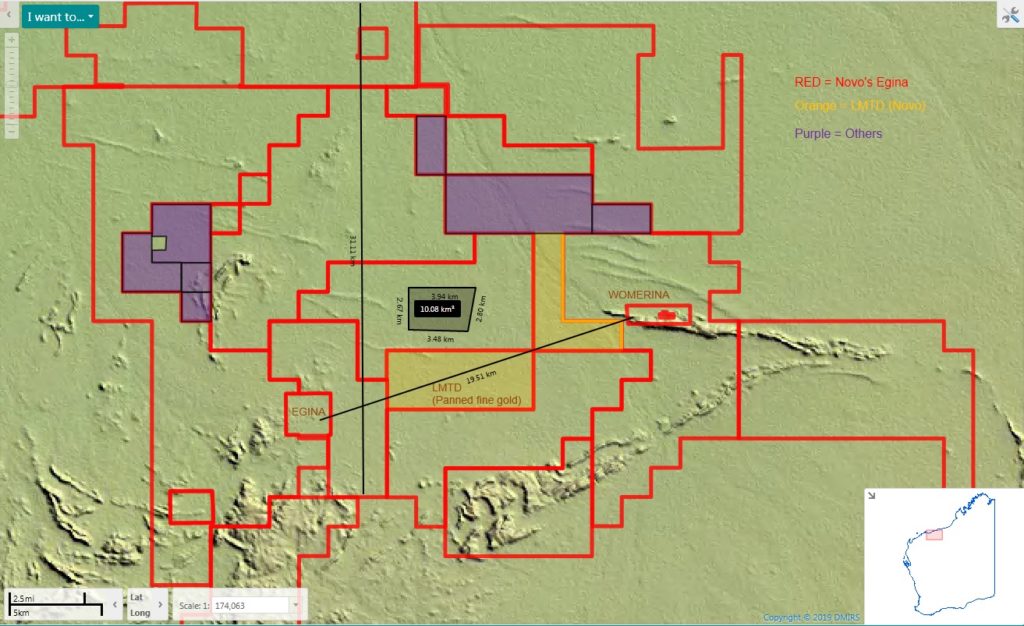 … As you can see, Novo/Sumitomo’s interest covers the majority of the Greater Terrace in this area. Furthermore, we know there is gravel gold at Egina and Womerina, which are 20km apart. Further still, LMTD (New Fronteer Exploration) went out to the middle of the Greater Terrace, between Egina and Womerina and got gold in their pan… Were they just lucky or does that infer that the gold bearing horizon might be present in a very very large area? Food for thought. 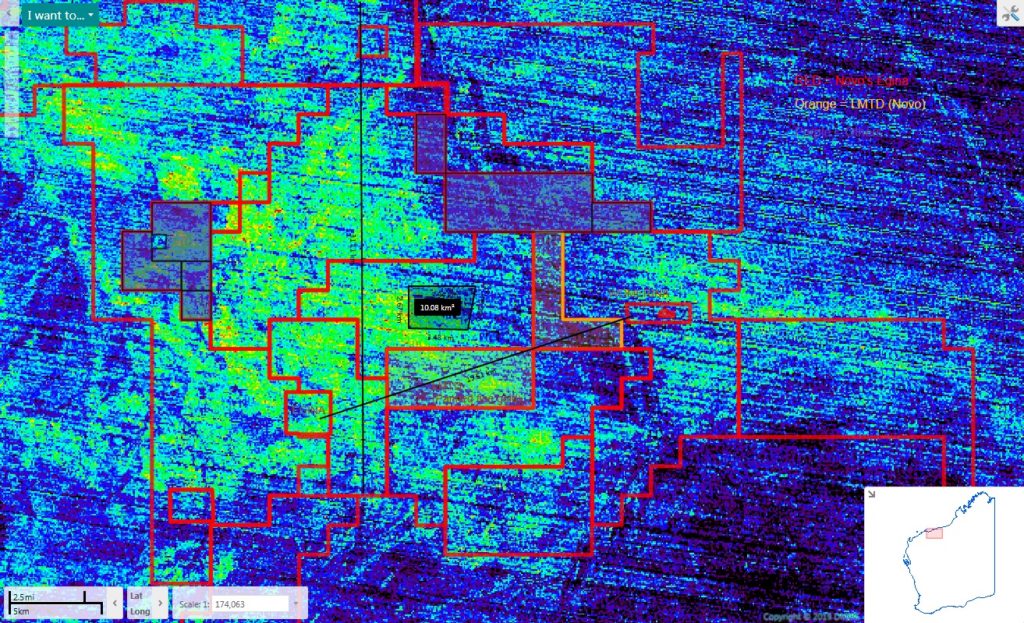 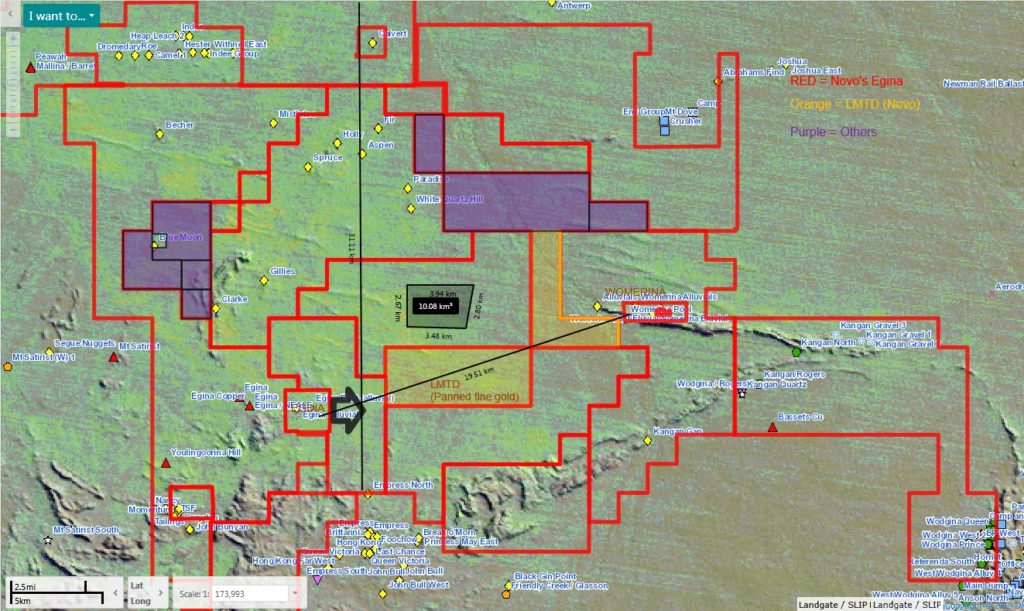 … As you can see in the slides above, the Egina area lights up like a Christmas tree with the quartz filter and high readings are present around many hardrock gold occurrences as well as covering most of the “flatlands”. Some quartz might possibly related to lode gold and some might be related to quartz found in the Mt Roe conglomerates as per the this Novo slide:

There is no mistaking the overall confidence emanating from Quinton Hennigh, Novo and Sumitomo right now. Case in point is the fact that the Novo/Sumitomo duo is already about to trial processing options for Egina and are talking about skipping any economic studies and head straight for trial mining and then full scale production. That kind of path requires high conviction in terms of the possibility for the Egina lag gravels to be economic to mine. If one takes the time line mentioned in the interview at face vale then Egina might become a mine at record speed granted everything goes well (The average time from discovery to a mine is somewhere between 10-20 years!).

If Novo/Sumitomo is able to mine these gravels through dry processing options such as Eddy-Current Seperators coupled with the target horizon being extremely shallow then I think there is a good chance that a mining operation could be wildly profitable. Makes me think about Keith Barron’s comments about Egina: “It will be like owning a bank”.

A lot of work is left to be done before we could make such a bold claim as Egina being one of the largest gold fields on earth, but thankfully I would argue that Novo’s Enterprise Value (EV) is nowhere near pricing in such a future anyway.

Thus, I remain very long Novo Resources as I think the EV is not reflecting the combined potential from:

Novo is not about one prospect or one mine. If Egina works and it covers a vast area, then the Egina Project area might host the equivalent potential of multiple conventional mines, alone for example. Same goes for Mt Roe and Hardey Formation. If Novo makes Comet Well and/or Beaton’s Creek (Hardey Formation) work, then that might open up countless similar deposits all around Pilbara. That is the bet. that is the prize. Investing is not about certainties, but Risk/Reward. What is such a “ticket” worth? What chance of success is reflected in Novo’s current EV? Food for thought.

Novo’s current Enterprise Value is around US$251M, including C$40-C$45M in cash, with Egina being financed by Sumitomo Corporation.