Chart of the Day: Turkey Showing us a Glimpse of the Future?

Turkey today is a good example of what I believe we will see happening in most countries in the coming years. Namely surging inflation along with heightened worries about the solvency of entire nations. Oh and to every MSM financial pundit that can always be seen on air touting that higher rates will slaughter the gold bulls… The Central Bank of Turkey’s  official repo rate is at 8 percent currently. Rates in a vacuum is meaningless to look at. It’s what the real rates are at that is the important thing. As I have shown in a prior post, gold in US dollars is trading more like a currency as well as tracking real rates more since after Trump got elected. 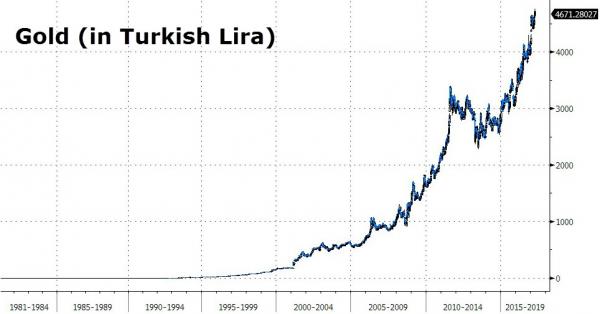 After the last hike we haven’t even seen a pullback as of yet!

In conclusion I really do feel that the graph depicting gold in Turkish Lira is a prelude of what is to come. Notice that it went almost exponentially higher along with gold in most currencies during the runaway period in 2010-2011, but then it didn’t crash. It just paused for a while before going almost exponentially higher yet again. This is where I think we are in USD terms as well, the pause before the storm. It seems investors have problems with wanting to get on board of something that has gone vertical (which is somewhat understandable). But the most important thing to keep in mind is that our FIAT based monetary system MUST grow exponentially or else everything falls apart, which I soon think it will. Then gold and silver will be perhaps even more valuable since privately owning physical metals exposes one self to no counter party risk.

Final note: I do think we will see a pullback in the metals and miners pretty soon, but not the same magnitude as when gold absolutely crashed after Trump won the election.