Gold juniors are trading at cheap levels overall right now and there are some that trade at pretty absurd valuation. Valuations one would expect at the depths of a bear market and a gold price of around $1,200 or so. In my opinion this is the best investing environment I have yet to see in this space. It’s getting almost impossible to make mistakes (overpaying) when such a vast amount of risk is already discounted in many of these companies. In this piece I will explain why I own shares of Omai Gold Mines, which I think is one of those absurdly cheap juniors, and agreed to have the company come on as a banner sponsor…

My Case For Omai Gold Mines

The case is very simple in my pinion. The company is trading at a valuation on par with some grassroot explorers even though the company owns an asset that used to be a top tier mine with potentially a couple of millions of ounces left behind (More on this later). If that wasn’t enough there is significant and probable exploration potential all over the project. I do think this project has a good chance of becoming a mine again and I think Silvercorp Metals and Sandstorm Gold Royalties feel the same as they own 15.1% and 9.9% of the company respectively. The only negative factor that I see is that it is in Guyana which is not a tier #1 jurisdiction. With that said I think Omai is way too cheap and that there is a relatively good chance to get at least a 5+ bagger within 24 months. A 5X would have the company valued at US$138 M which I certainly don’t think is a stretch if the company is successful in showing multi million ounce potential (which I see as likely in that timeframe). I get that Guyana should have a discount but this is simply irrationally cheap for an asset of this quality in my opinion…

Lastly I would say that Sandstorm Gold Royalties is in the business of owning ROYALTIES on MINES. A stake by said company basically says, again, that they think it has a decent shot at becoming a mine simply due to the quality of the project. With an Enterprise Value of ~US$23 M one readily can see that nothing of the sort is priced in. So as I see it either Sandstorm Gold (and Silvercorp) are incompetent or Omai Gold Mines is a steal at these prices.

The Case in The Words of Management: 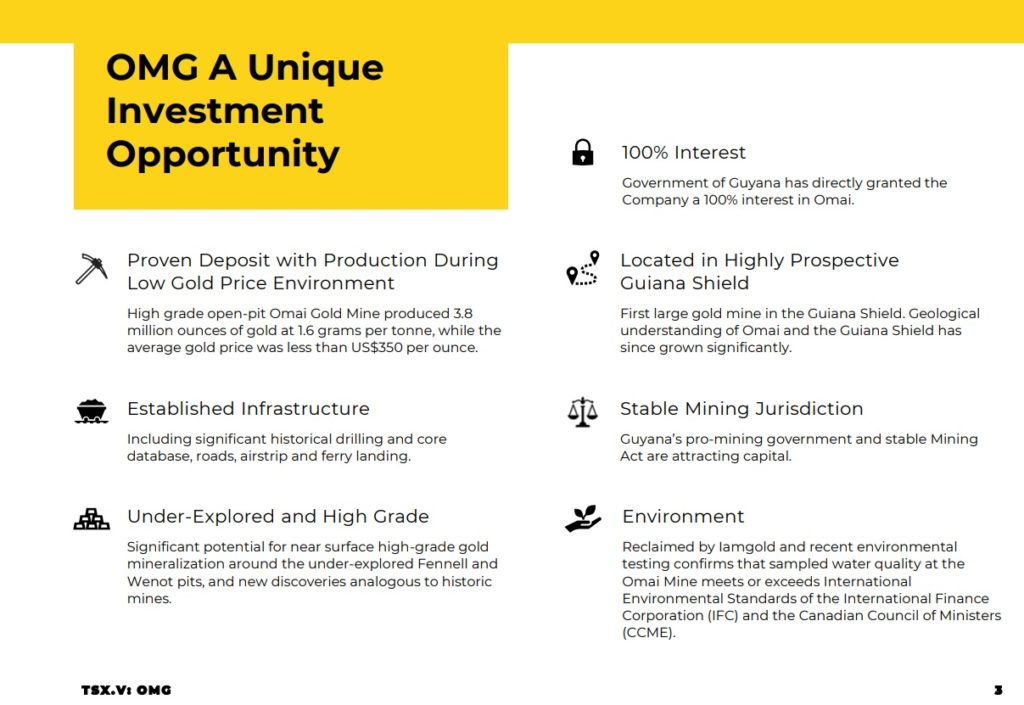 As can be read above the Omai Gold Mine produced a whopping 3.8 million ounces of gold during a period of time where gold averaged US$350 per ounce. In other words it was a very high quality mine. As far as I understand IAMGOLD, who used to mine the deposit, decided to wind down the mine and move the plant when they made another big discovery in the area. This perhaps “hasty” decision is what has provided the opportunity for Omai Gold Mines. Remarkably the Omai Gold Mine has only seen 87,845 meters of drilling. This is pretty astonishing given how much gold was mined. It also suggests that there is no way that the mine and the surrounding area has seen anywhere near enough exploration drilling. In other words IAMGOLD pretty much just upped and left with potentially a lot of “money still at the table”. On that note I present the following slide: 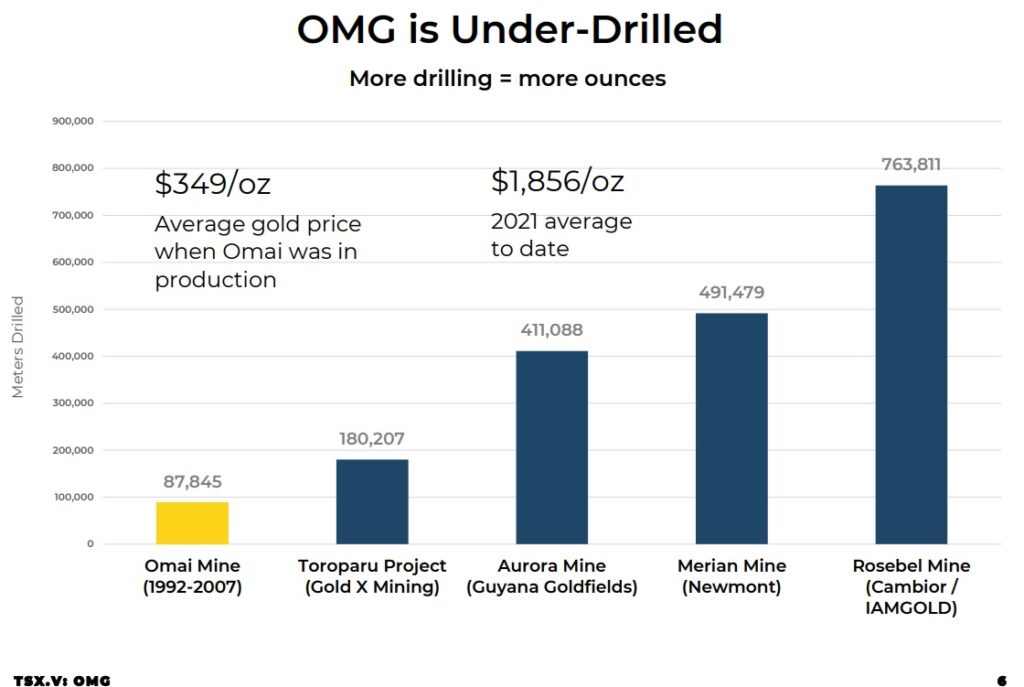 … I think this slide alone sums up the case very well. Simply compare the meters of drilling at the Omai Mine with how much drilling has taken place at other large mines in the region. One has to wonder what might come up if this project would see say 3X the amount of drilling than has taken place(?). Balance of probabilities would suggest that there is a lot left . With that said one might think “Maybe they didn’t drill more because the deposits appeared to be closed off already?”. To answer that potential worry I present the following…

The Omai Gold Mine consisted of two pits; The Wenot Pit and the Fennell Pit. Below is picture of what it looked like in the year 2000 when the gold mine was active: 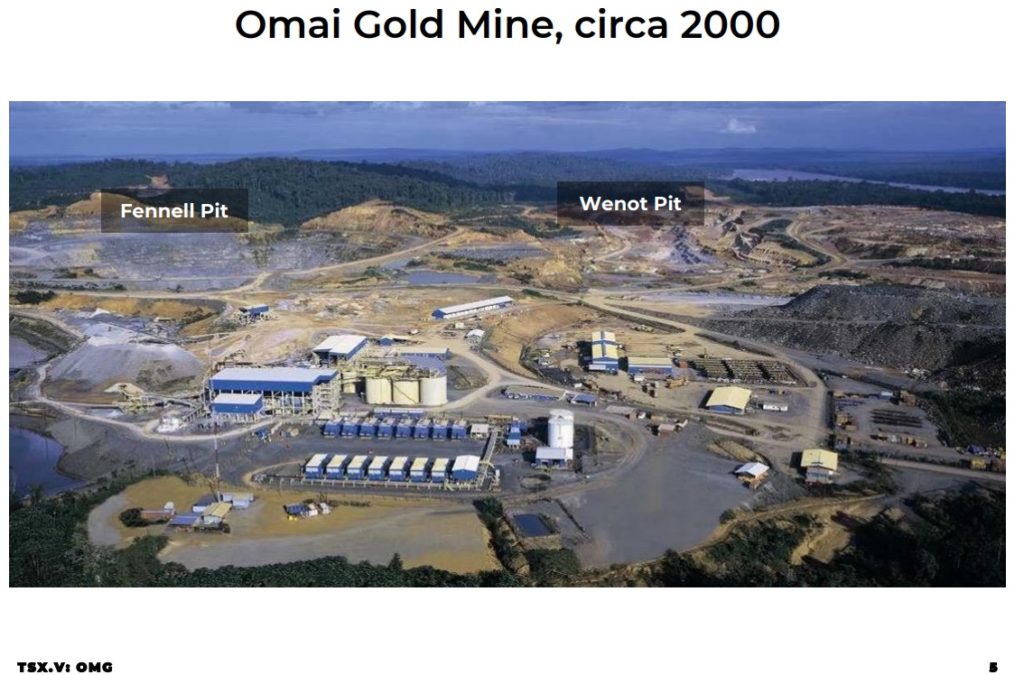 Now, lets first look at the Wenot Pit which is one of two pits that made up the Omai Gold Mine: 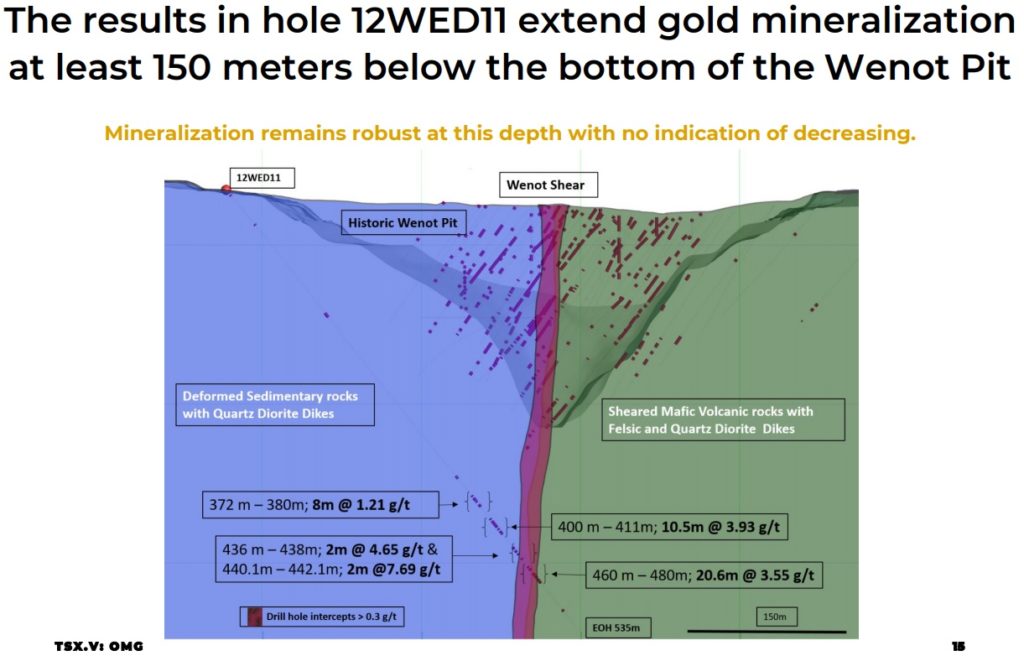 What should be obvious is that there certainly looks to be a lot more at depth at Wenot than what has been mined so far as the slide suggests; “Mineralization remains robust at this depth with no indication of decreasing”. Furthermore those are some good bulk mineable intercepts. This is obviously a very big deal since it means that exploration upside is not potential but PROBABLE. This greatly affects the risk/reward calculation since probable upside is a lot more valuable than potential upside (all else equal). The best part is, as stated earlier, that Omai Gold Mines is pretty much valued like it was involved in pure high risk, grassroot exploration. Further evidence of  there being probable “low hanging fruit” at Wenot can be found in a recent NR that presented “the results from a program of logging and sampling of 6,000 meters of unassayed core from a 2012 drilling program that had been preserved by the Guyana Geology & Mines Commission (GGMC).”…

“Current assay results from core that was drilled in 2012 and not previously sampled demonstrate that the Wenot grades and thicknesses from historical mining continue below the historical Wenot Pit. The results are important as not only has mineralization been extended to depths of 100 to 150 meters below the pit and remains open to depth, but high-grade gold identified in the sediments has potential to widen the historical pit. We look forward to following up on these results with our planned 5,000-meter drill program.” 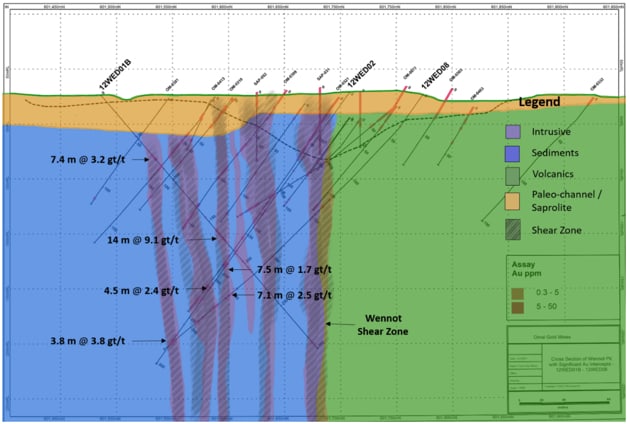 Even more upside potential shows up as we look at a Long Section of Wenot that also stated that it’s  “open in both directions along strike, and to depth”: 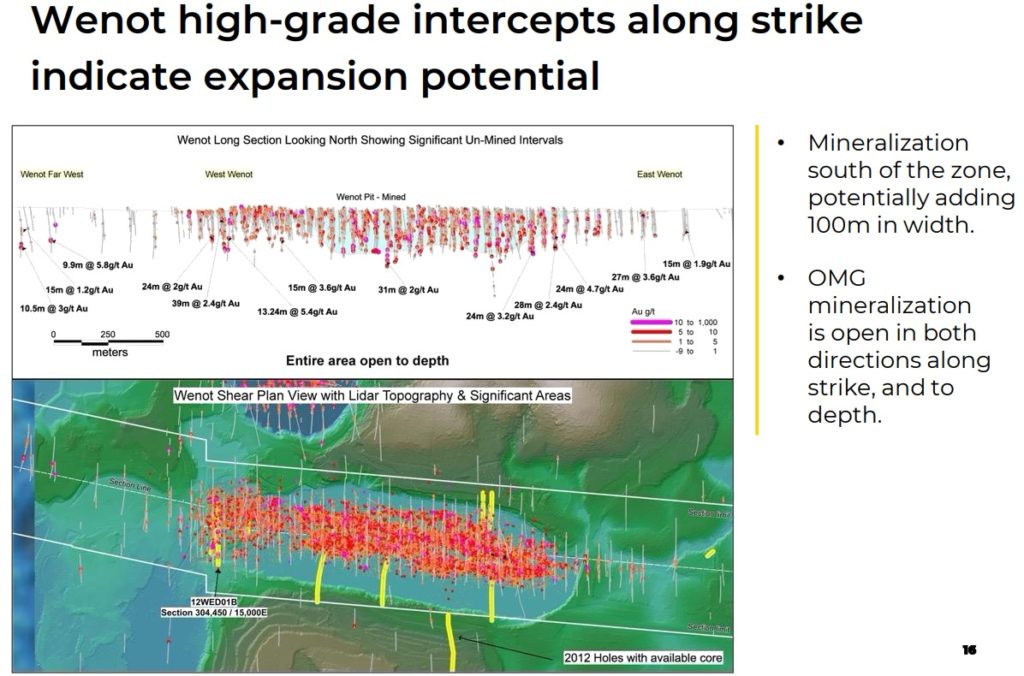 Fennell is a very interesting side of the Omai story. The Fennel system was open pit mined down to a sill contact. Even though the sill itself is barren the system actually keeps on going beyond it at depth. Said sill appears to simply have split the system judging by the numerous extraordinary drill intercepts that are located below it: 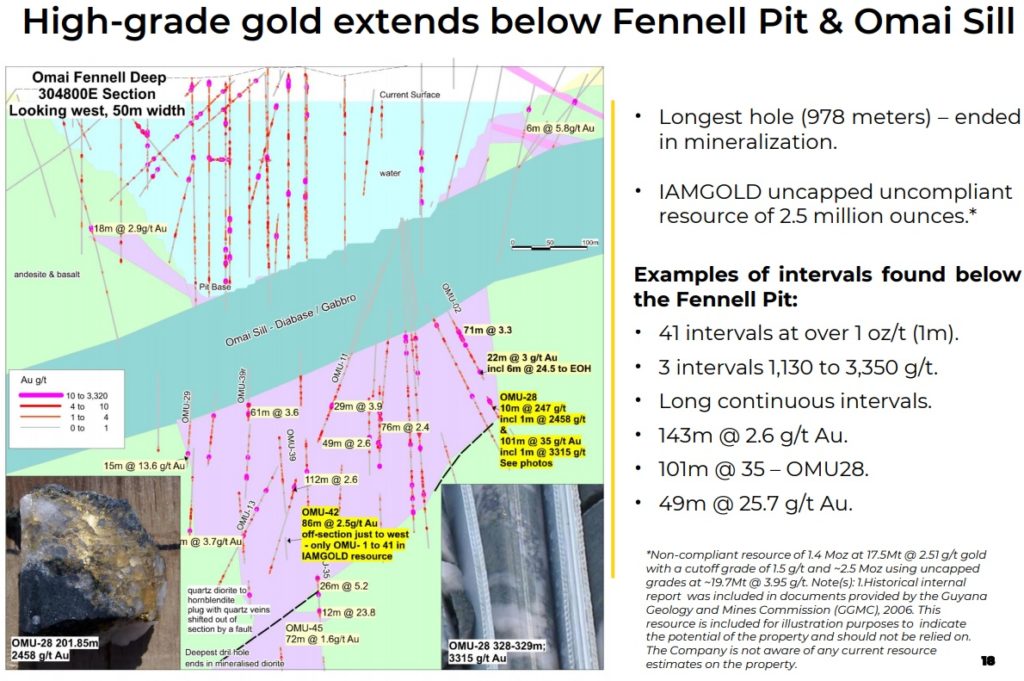 …Those are obviously some pretty obscene intercepts and one can understand why this system was a very high quality mine. One would think a lot of this could result in an underground bulk mine that enters at the bottom of the historic pit. Also note that IAMGOLD had an uncapped uncompliant resource of up to ~2.5 million ounces here. Lastly, note the comment that reads “Longest hole (978 meters) ended in mineralization”. How deep can this system go? I don’t know but the next slide should really hammer in the potential in this underexplored gold system at Fennell: 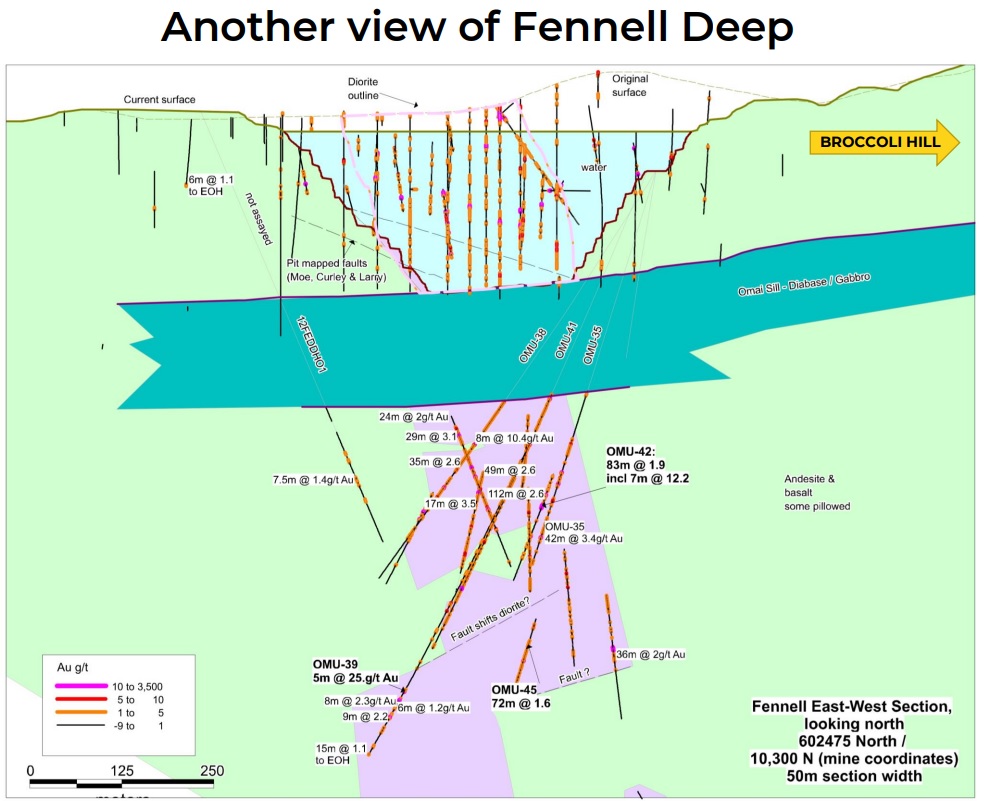 … Is the Enterprise Value of Omai Gold Mines starting to look really silly by now (if not before)? Well I sure think so since most juniors would kill for intercepts, (a noncompliant) resource and obvious exploration potential like we are seeing at Wenot and Fennell.

Beyond the exploration potential directly tied to the known deposits there are also exploration targets such as the “Broccoli Hill” target which is a near surface target situated directly east of Fennell: 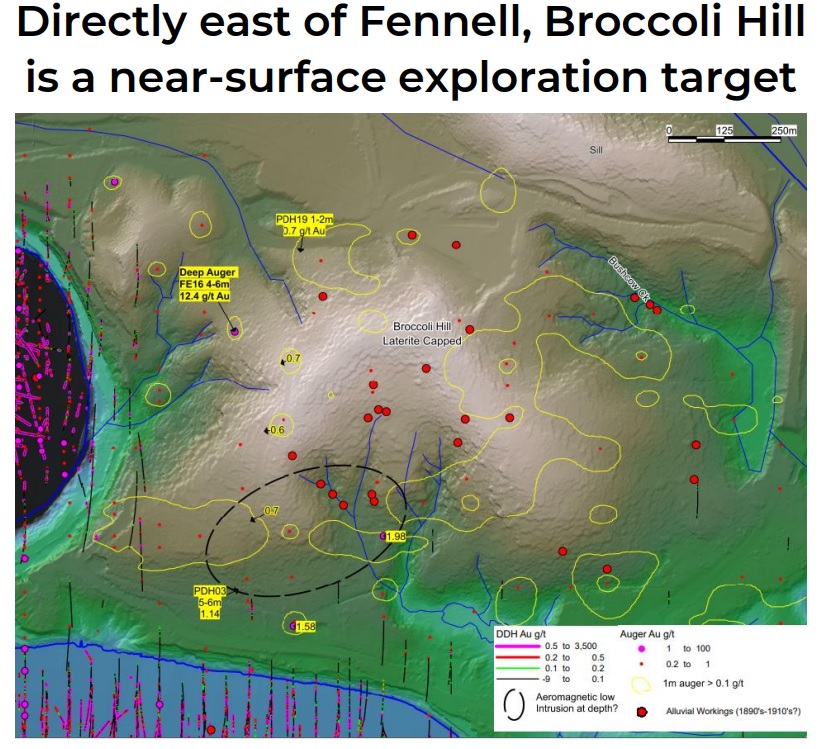 Then we have the blue sky potential exploration potential beyond Fennell, Wenot and Broccoli Hill: 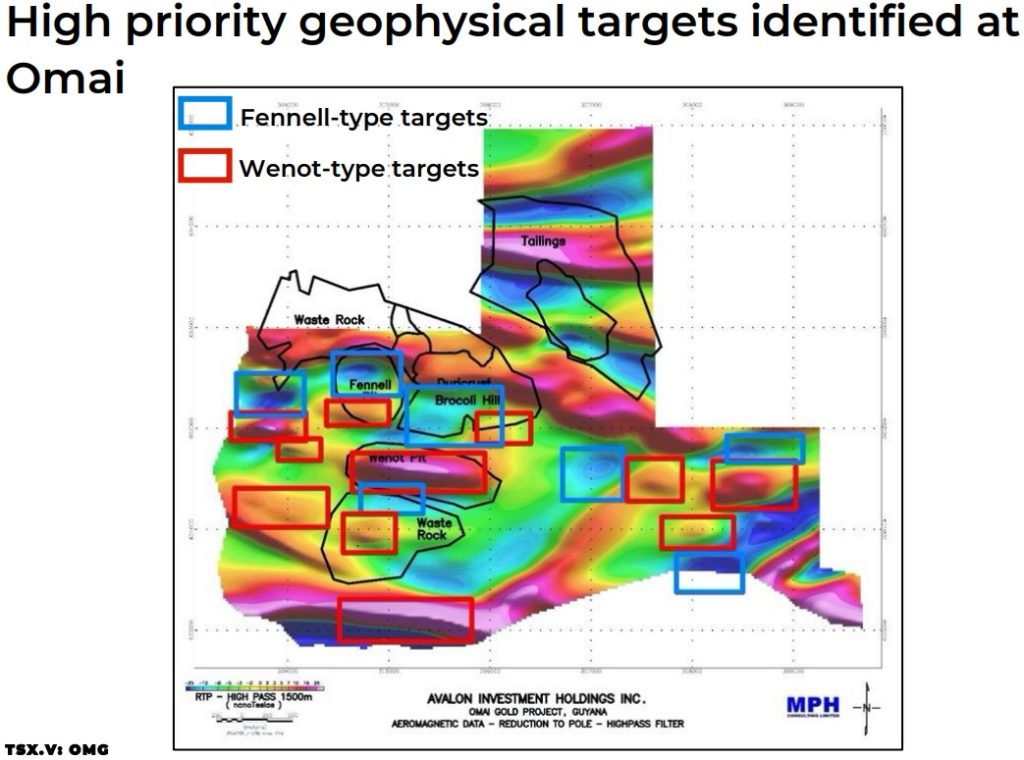 … Remember there has only been around 87,000 m of drilling which means that pretty much every target you see in the slide above should be considered “live”. On that note I found this snippet from the presentation interesting:

… Who knows, maybe said “intrusive source” created a cluster of similar deposits and Fennell and Wenot are just the first of many? There are absolutely no guarantees that there will be many more of course, but since nothing like that is even close to being priced into the stock, it’s “free” upside anyway.

You will only see opportunities like this in a sleeper stock during bear market sentiment levels. This case is yet another example of why I love the current market environment. Being able to pick up stories like this, for a fraction of sunk costs and with substantial upside potential on top, for a bit over US$20 M should not be possible when gold is trading around US$1,800/ounce. I mean we have two large companies backing Omai which indicates they think there is a reasonable chance that this project will really become a mine again. This is not really surprising given the amount of “inferred” ounces one can imagine at both Fennell and Wenot. The surprising part is that nothing of the sort is priced in. With an expected NI 43-101 resource update planned for this year I think the “fuse is lit”. If the market does not appreciate the opportunity right now it probably will when the already banked success (value) will be out in black and white.

I cannot stress enough how important I see the backing from Silvercorp and Sandstorm to be. One is a producer and the other is a one of the best and smartest royalty companies out there. If they can foresee this becoming a material mine then who am I to argue? And as it gets closer and closer to it looking like an actual mine the valuation we are seeing now will look very silly in hind sight I think.

As always there are no guarantees of anything in this space and I would not bet the farm on any one company no matter how good the risk/reward looks. With that said I see this as a situation of where almost nothing positive is priced in (banked- or future success) which results in risks being to the upside in my opinion. If it doesn’t work out at all for some reason then too bad. If it does work out and this becomes say a >3 Moz mine then I can see >10 bagger potential with time.

To me it looks like there is a clear RSI resistance line and I think the leg up will start when said RSI line has been broken. I don’t know when that will happen but I am content accumulating cheap shares until then: 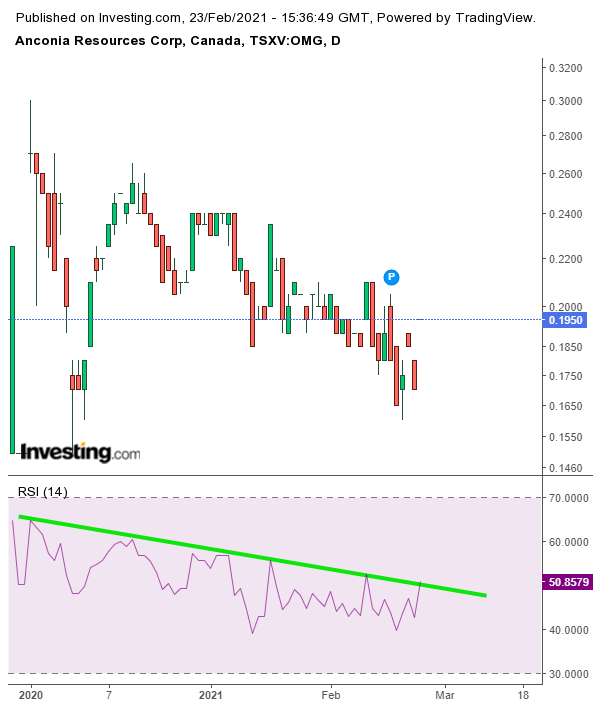 Note: This is not investment or trading advice. I am not a geologist nor am I a mining engineer. This article is speculative and I can not guarantee 100% accuracy. Junior miners can be very volatile and risky. I have bought shares of Omai Gold Mines in the open market. I can buy or sell shares at any point in time. I was not paid by any entity to write this article but the company is a passive banner sponsor of The Hedgeless Horseman. Therefore you should assume I am biased so always do your own due diligence and make up your own mind as always.