Eloro Resources (ELO.V): Missing The Forest For The Trees

Flash February 25: Quinton Hennigh talks about the News Release over at Kereport.com:

Eloro Resources just released more assays from the testing of the different breccia pipes at Iska Iska, Bolivia. Unfortunately the assays from the deep holes were delayed but we got  assays from holes that tested the shallower parts of the Santa Barbara Breccia Pipe:

Highlights of the SBBP drill results are as follows:

Although the grades aren’t necessarily flashy I think the market seems to have missed that the tonnage is building very quickly and the sheer scale of the Iska Iska system(s) makes it much more likely to become one giant bulk mining operation (not a small scale high grade operation). On that note…

“I’m not sure where you got the idea this is low grade. Low grade depends on what country it is located and near surface or underground. This is $105 rock near surface. It would be economic almost anywhere in the world but certainly in Bolivia. In Bolivia it would be economic even underground. If you can’t see that is represents a giant deposit, you need to go do some more research.”

Just consider the fact that, as per the slide below, hole DHK-16 seems to have just made it 1/3rd across the Santa Barbara Breccia Pipe AND mineralized envelope that surrounds it. That hole assayed 67.39 AgEQ over 213 m and that might not even be halfway through…? Think about it! 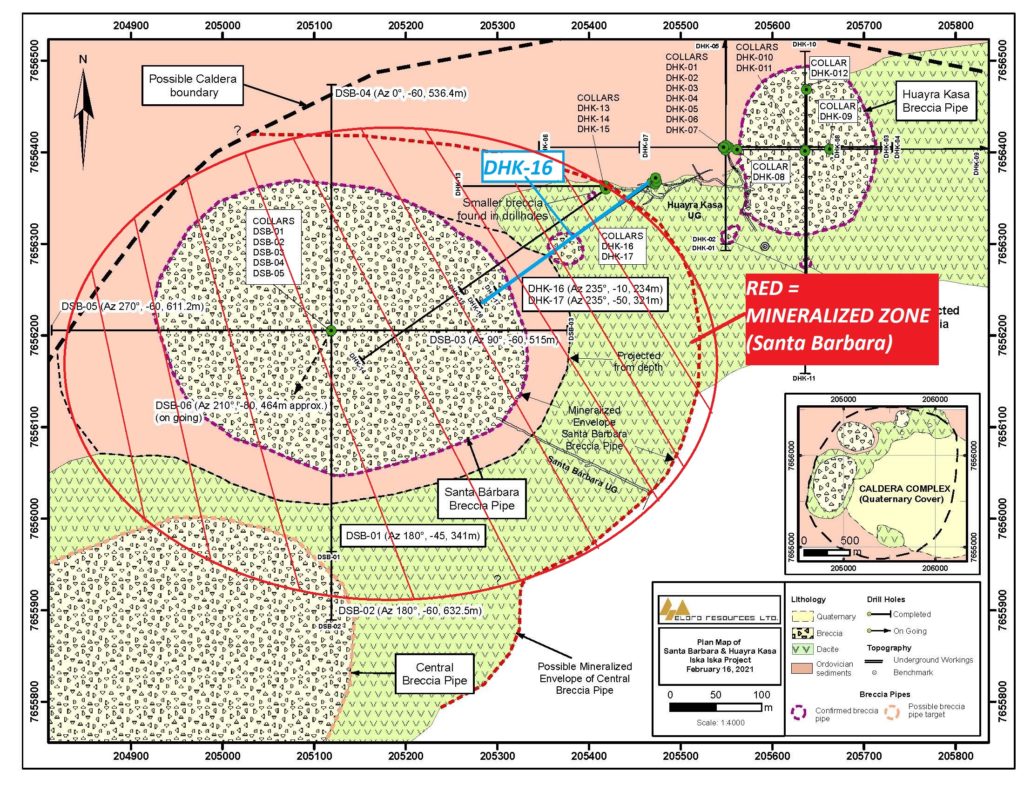 The same goes for DHK-14 which reached about halfway into the red circle and hit 79 gpt AgEQ over 131 m. Keep in mind that these hits are pretty high up in the system and DHK-15 which was drilled deeper than DHK-14 hit 129.6 gpt AgEQ over 257.7 m and according to the plan map DHK-15 didn’t even pass the halfway point of the diameter of the pipe + mineralized envelope. 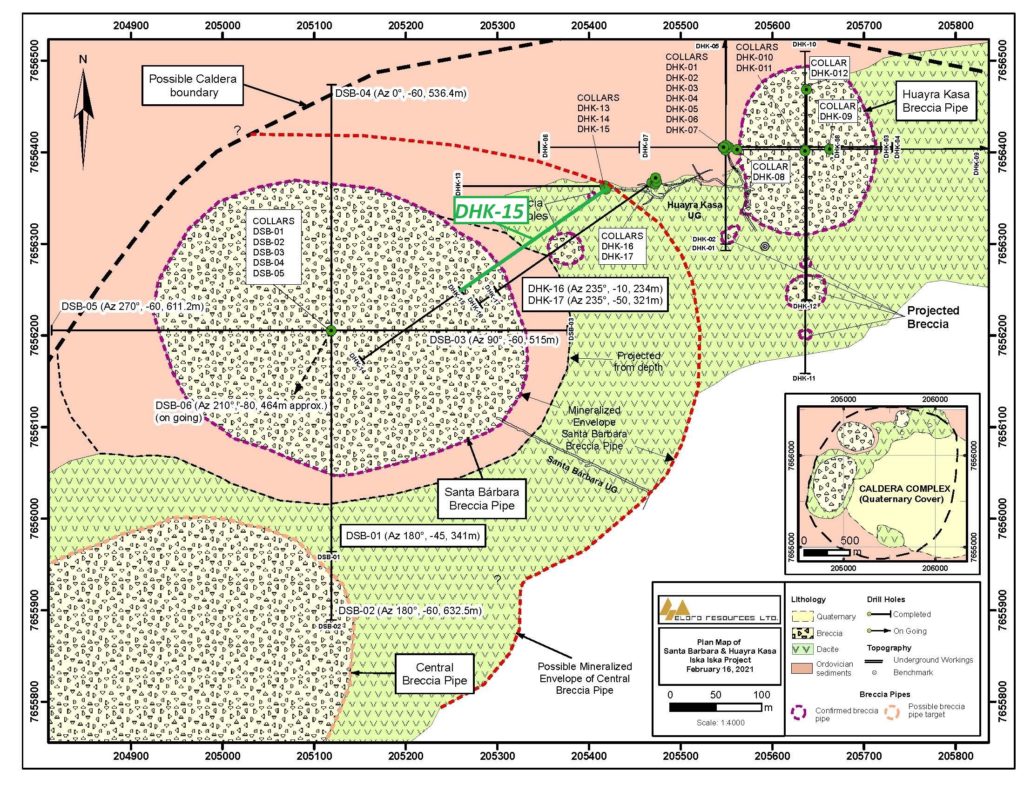 DHK-13 (reported earlier), which seems to have only really intersected the mineralized envelope, still assayed 74.16 AgEQ over 40.88 m.

At $1.5/AgEQ ounce that’s $7.6/share from only this part of one pipe.  Am I too optimistic? I don’t think so. Especially since there are two more pipes for added economies of scale and the Santa Barbara pipe has not been fully tested in width and is wide open at depth.

To quote Quinton from the NR:

“In the meantime, we are quickly seeing Iska Iska grow dramatically through mineralized intercepts encountered in recent drilling.”

We already know the smaller Huayra Kasa Breccia Pipe is mineralized as well:

Comments on Huayra Kasa from the NR:

“The Au-Bi mineralization outlined in the underground workings of Huayra Kasa and in the beginning of hole DHK-05 is also characteristic of mineral deposits in the district such as Tasna, located 50 km northwest of Iska Iska”

The Central Breccia Pipe and a Porphyry at Depth…

“Hole DSB-02 intersected at its bottom significant grades ​​of Sn and Au, which is characteristic of other deposits in the district such as Chorolque, located 25 km northwest of Iska Iska. At Iska Iska, the Huayra Kasa breccia pipe could be peripheral higher-level epithermal mineralization with predominantly Zn, Pb, Ag and Au. The SBBP west of Huayra Kasa is likely an intermediate zone with telescoped polymetallic mineralization of Ag, Sn, Zn and Pb. The CBP with Sn-Au association could constitute the core zone similar to the Chorolque tin deposit.”

“In the case of Iska Iska, the mineralized system has a high degree of preservation of the entire porphyry-epithermal system.”

“We are seeing increasing evidence of an Sn porphyry at a much shallower depth than previously thought. The SBBP is a major Ag-Zn-Pb target whereas CBP is looking more like an Sn-Ag-Au target. In the Huayra Kasa underground workings we identified a third major target, high-grade Au-Bi. Clearly we have a large scale complex multiphase porphyry-epithermal system driven by a major porphyry at depth.”

“The preliminary results for hole DSB-02 strongly suggest we are rapidly approaching an underlying Sn-Ag-Au porphyry system as we test the deeper part of the CBP area.”

Eloro has just begun scratching the surface at two of the at least three breccia pipes and the inferred tonnage/endowment is already stacking up to a very sizeable deposit in my opinion. Furthermore the mineralization seems to get STRONGER and DEPTH and also seems that there is a major Sn-Ag-Au porphyry system below which we have not even gotten into yet…

“In the case of Iska Iska, the mineralized system has a high degree of preservation of the entire porphyry-epithermal system.”

Do I know how big Iska Iska could get? No, but I think it has a good shot of being a system(s) for the history books given how quickly the inferred tonnage is stacking up.

“In the meantime, we are quickly seeing Iska Iska grow dramatically through mineralized intercepts encountered in recent drilling.”

More signs of this being a serious discovery already can be found in the company’s plans as per the NR:

“Preliminary metallurgical tests have also been initiated with Micon.”

“Our second drill will commence shortly with first pass drilling of the 700m longitudinal extent of the CBP from both the north and south setup areas. The drill currently at SBBP will complete the deep hole then we will follow up areas of higher-grade mineralization in the vicinity of Hole DHK-15 and follow up on the major extension of the SBBP to the west. Drilling will be designed in consultation with Micon International to optimize future resource estimation.”

… Metallurgical testing and planning to optimize the drilling for resource estimation ALREADY. You don’t do that for shits and giggles.

Don’t let the non flashy grades from the shallow drill holes fool you. The potential tonnage and size of Iska Iska has the potential to be almost unique and we are just in the very early days. Ideally Iska Iska will prove to have the potential to be one of the biggest deposits around in the form of three different systems sharing one caldera. With the price of tin rocketing on limited supply one can only imagine what a major Tin-Silver-Gold porphyry could be worth alone…

If things play out as I hope I think Iska Iska will be worth multiple Billions at the end of the day. And the best part is that a lot of this mineralization can be de-risked quite quickly given the overall disseminated nature.

I wouldn’t say the market is at Novo level stupidity but it’s pretty damn insulting to see a 30% sell off on a few shallow holes when Eloro might be onto one of the biggest discoveries in decades. The best part is that if this is a true behemoth then there is plenty of upside left since the Market Cap is “only” $210 M and a “new Potosi” should be worth a helluva lot more than that. In light of this I am very comfortable with my large position and even added during the sell off…

“We have only just begun” 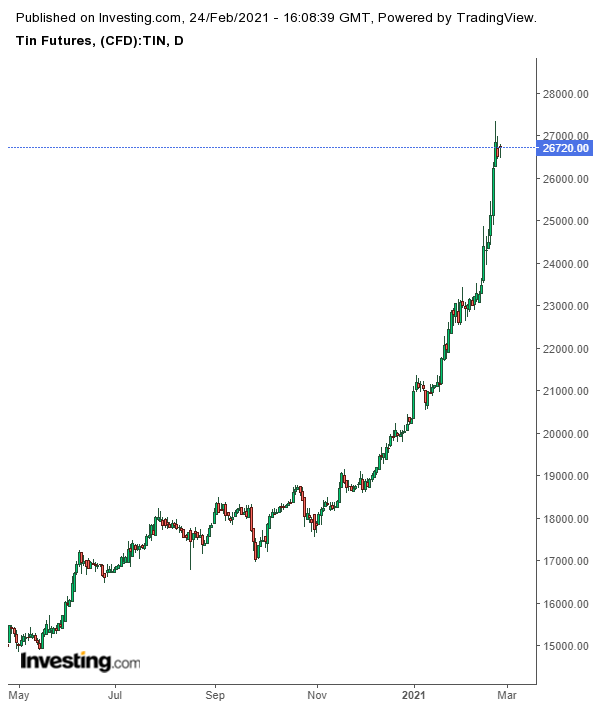 Note: This is not investment or trading advice. I am not a geologist nor am I a mining engineer. This article is speculative and I can not guarantee 100% accuracy. Junior miners can be very volatile and risky. I have bought shares of Eloro Resources in the open market. I can buy or sell shares at any point in time. I was not paid by any entity to write this article but the company is a passive banner sponsor of The Hedgeless Horseman. Therefore you should assume I am biased so always do your own due diligence and make up your own mind as always.