White Gold Corp has been pretty beaten up lately and the question is: Is it warranted?

From a relative valuation perspective the company is certainly not expensive based on an EV/Oz basis: 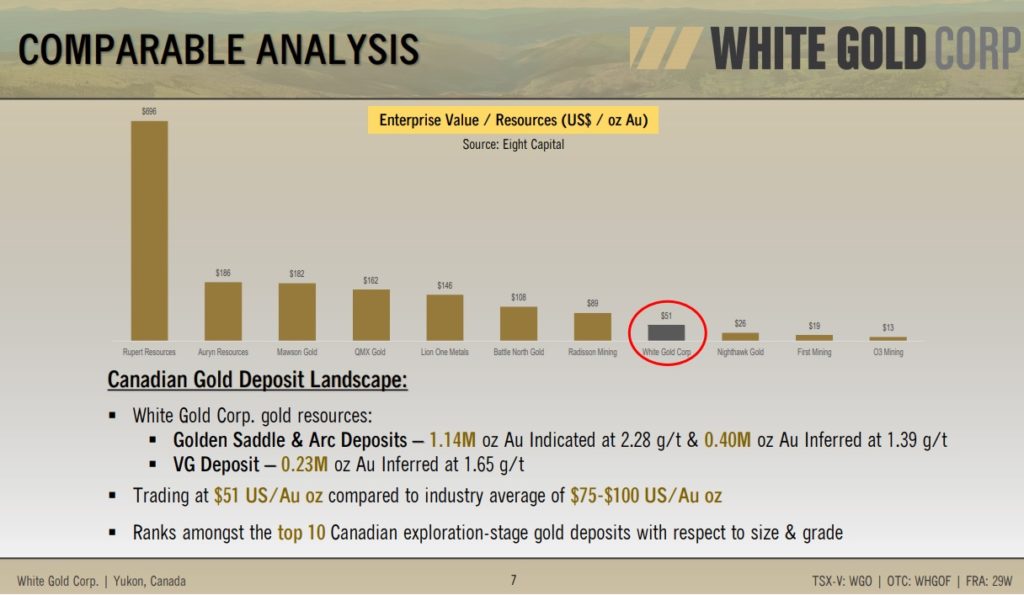 With close to 2 Moz in resources, with good grades for open pit deposits, a huge land package, more targets than I can count, it would suggest that the risk/reward ought to be getting pretty good at these valuation levels. One thing that I think has put a damper on sentiment is the long wait for assays from the Titan target: 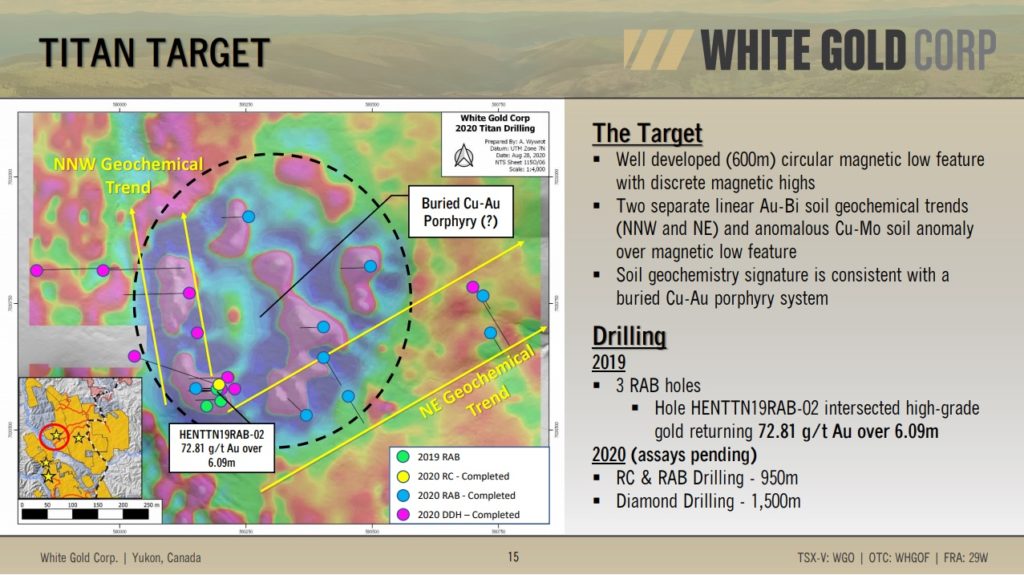 The company drilled three RAB holes in 2019 and one of them returned a spectacular 72.71 g/t Au over 6.09. Obviously there is something going on there and as per the slide above there might be a Cu-Au porphyry system hidden below ground. The 2020 drilling looks to cover quite a bit of ground so if there really is something there I would expect to see some sniffs in the upcoming drill results. With that said the company has already released results from the Ryan’s Surprise target: 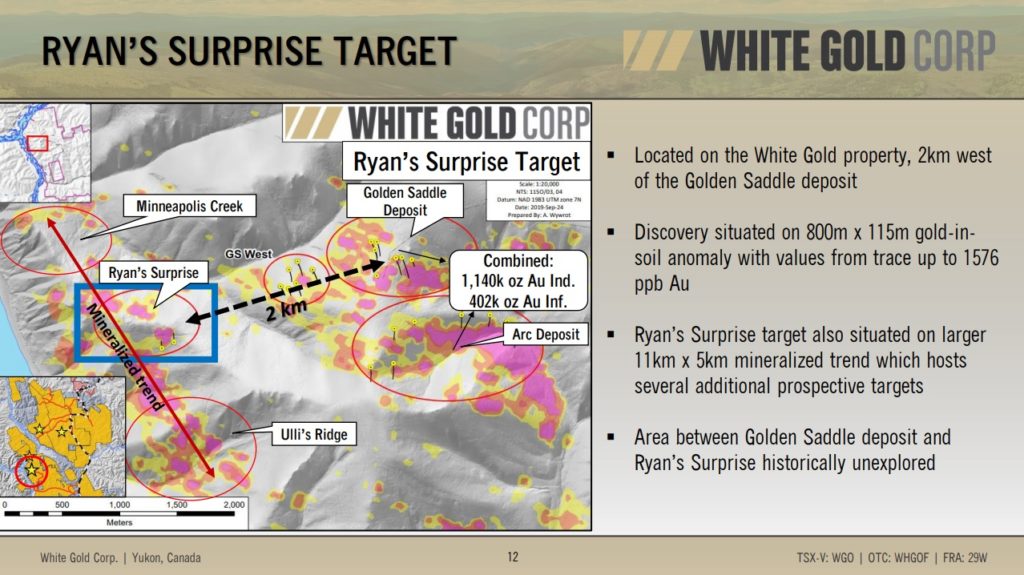 … Which is located 2 km to the west of the Golden Saddle deposit (which has a resource over 1.5 Moz already). The drill results were quite encouraging as per the October 14 NR:

“We are very pleased to have encountered additional high-grade mineralization at the Ryan’s Surprise in new zones and extensions to previously encountered mineralization in multiple directions. These results and the close proximity to our established resources provides further evidence of the growth potential of these projects. We are also further encouraged by the prospectively of the other targets in this area which share geological and other characteristics with this recent discovery”, stated David D’Onofrio, CEO of the Company.

… Again, there is obviously something kicking around there and its not far from the Golden Saddle deposit which means that the threshold to reach critical mass should be way lower compared to a potential stand alone operation. The company also released encouraging trench results from multiple targets (8 targets tested in total) on October 22:

Figures and images to accompany this news release can be found at: http://whitegoldcorp.ca/investors/exploration-highlights/.

“We are pleased to have encountered additional gold mineralization across multiple recently identified zones as well as the high-grade gold mineralization on the newly discovered Notorious target, providing further indication that the abundant gold mineralization is part of a robust regional scale structurally controlled system. To date at least 14 gold targets have been identified on the JP Ross property across a 14km by 11km area, many within close proximity to significant current and historical placer gold operations,” stated David D’Onofrio, Chief Executive Officer. “This program has also provided valuable insight into the orientation and geometry of the mineralized systems, information that has been incorporated into our scientific and data driven methodology to define drill targets for the current and future seasons.” 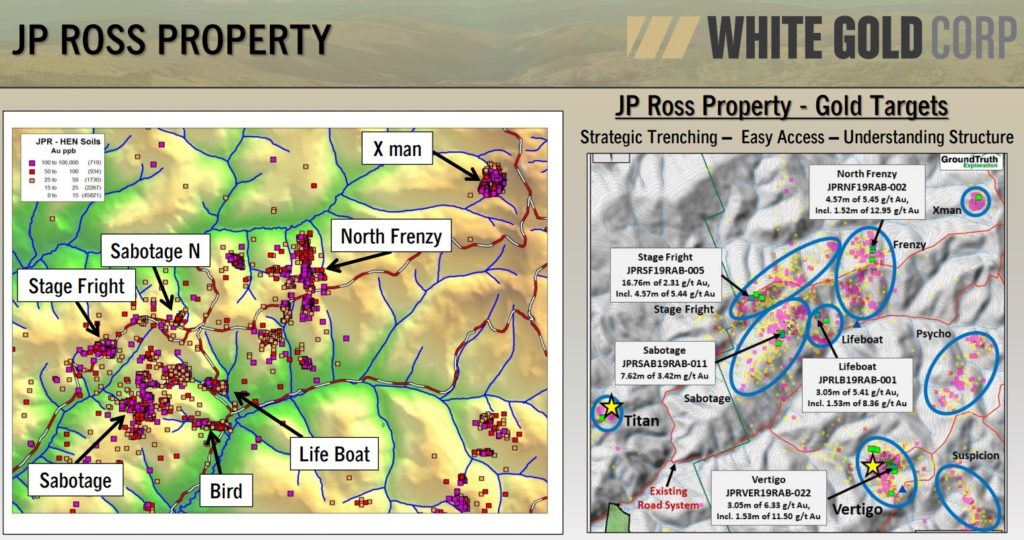 The thing with White Gold is that the company has an absolutely enormous land package in the Yukon territories and it looks like there is gold all over the place as evidenced by how many targets have either been trenched and/or drilled with gold confirmed. With Agnico Eagle and Kinross Gold as major shareholders White Gold is swinging for the fences since the backers want them to find something really big. This aggressive exploration campaign probably obscures the fact that the company already has around 2 moz of (good) gold in the ground. Since this is the Yukon, where infrastructure is increasing but is not totally up to par just yet, it makes total sense to try and turn something good into something great. Anyway, I think this wrongfully gives off the vibe that the current resource is not valuable. Why the 2 Moz is very important to the story is that it of course means that it is much easier to reach “critical mass” in terms of ounces for a potential development decision if one starts off with 2 Moz and not 0 Moz. A good satellite deposit or two could change things a lot and any additional ounce discovered should bring more exponential value to the overall story compared to most stories around. It’s a highly leveraged exploration story if you will since a typical junior might need to go from 0 to 2 Moz for a development decision whereas White Gold might “only” need say 1 Moz on top of the pre-existing 2 Moz for the company to become much more valuable.

Anyway, I think this is a high potential story and on paper it should be relatively low risk given the 2 Moz banked already. And as I said previously I think it is extremely leveraged to any additional discoveries. If we are lucky the upcoming results from the Titan Target might be trigger that kicks this story into a higher gear. As always there are no guarantees, only variable risk/reward.

The chart looks quite interesting because depending on how you draw the upper support line it looks like it either -retesting the break out (again) or just slightly broke it yesterday. If it’s the latter then this could be another major fake out as has happened on multiple occasions before (Blue arrows). Lastly, the share price might also be forming a quite big Head and Shoulders reversal (bottoming) formation: 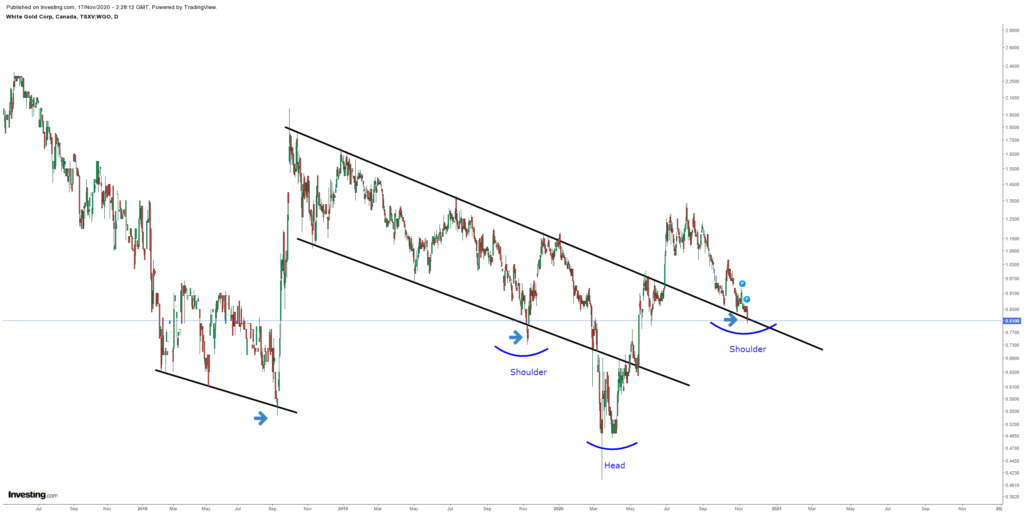 Anyway, I don’t think the current level is “buying high”, which is backed by some analyst targets that range between $2.25-$3.20/share. Furthermore we’re close to $1,900 gold and this leg down in WGO looks pretty overdone already and I think the next big wave is probably going to be up and not down (Especially if they hit something good at Titan). With that said anything can happen in the short term.

Note: This is not investing or trading advice. I own shares of White Gold Corp which I have bought in the open market and the company is a passive banner sponsor of The Hedgeless Horseman. Always do you own due diligence and make up your own mind. It’s your money and your decision.