The somewhat recent discovery made by Novo of a 30-35m thick section of conglomerates beneath the Mount Roe Basalt at Comet Well, including a new circa 15m thick lower conglomerate sequence that contained “buckshot” and weathered pyrite made me think about De Grey’s discovery north-east of Purdy’s Reward/Comet Well. The thing that stood out with their conglomerate discoveries some months ago was that some were much thicker than what Novo was seeing at Purdy’s Reward. “Jarret Well” was approximately 50m thick and Steel Well was even thicker at 80m, and I remember Quinton stating that De Grey did in fact have the same type of conglomerates that Novo were finding 80km+ away. 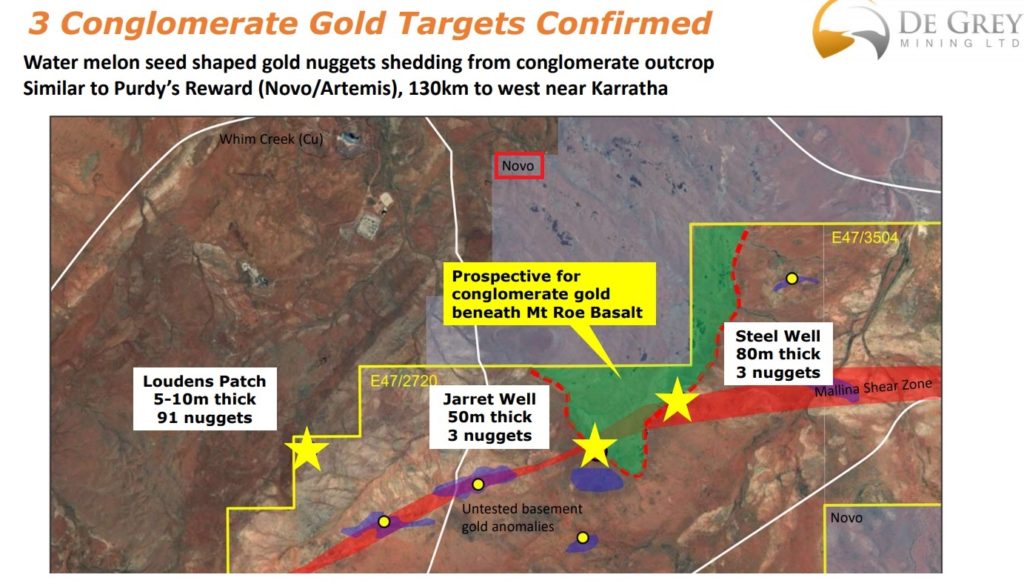 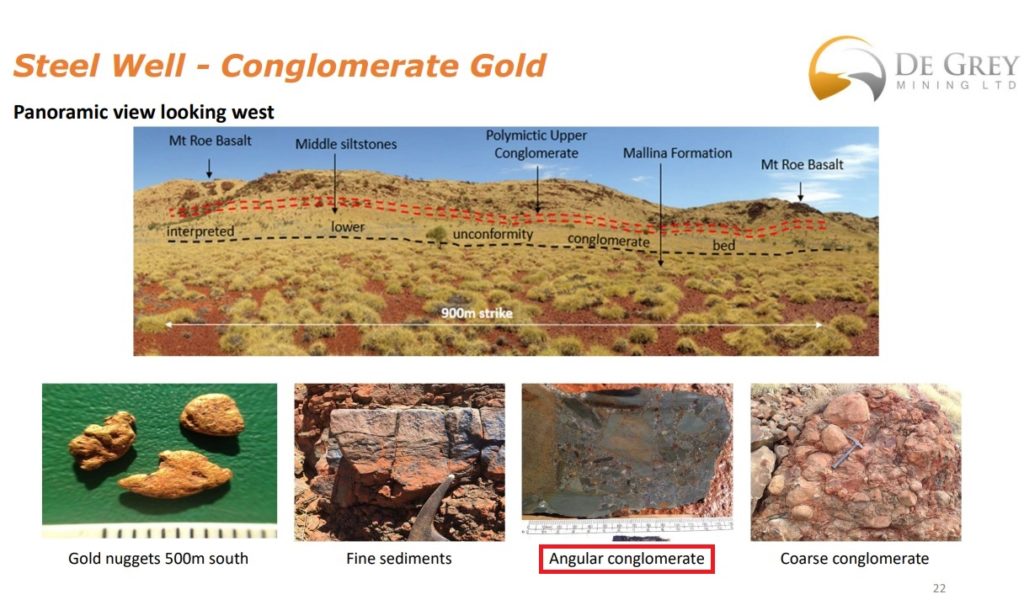 Do you remember the picture from Novo’s latest NR showing large boulders with “weathered pyrite occurring in the matrix of the lower (CW) conglomerates”? 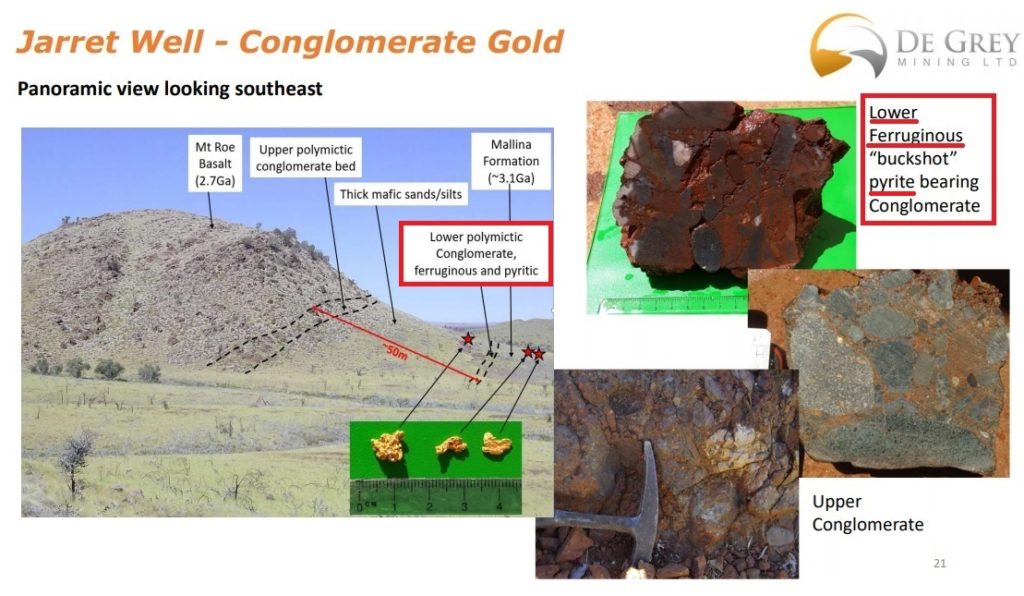 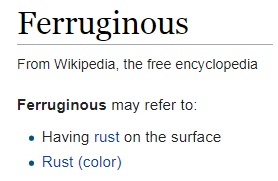 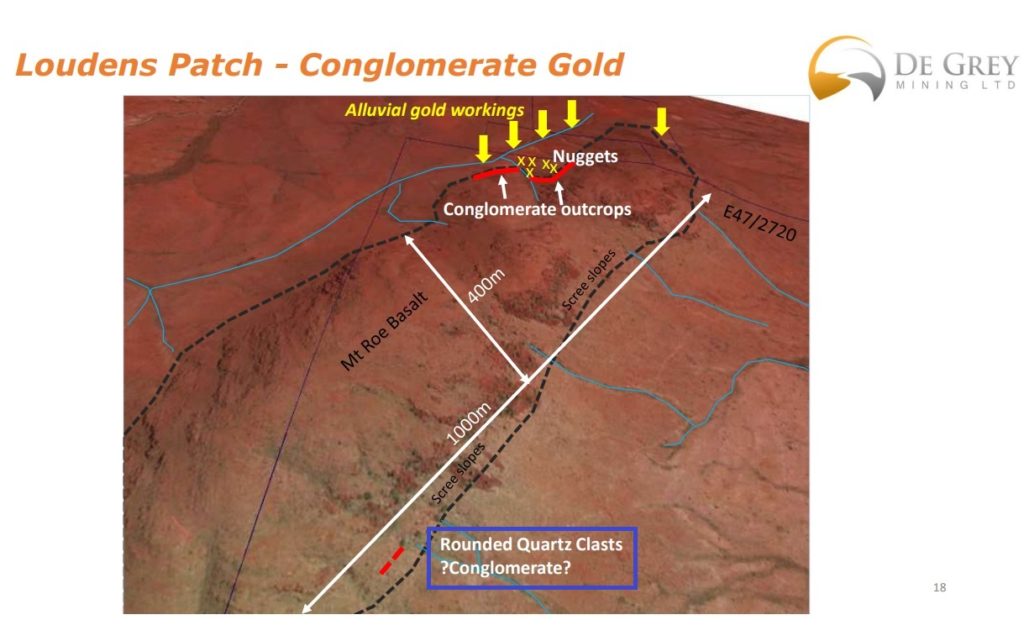 …. Note what it says in the bottom of the picture: “Rounded Quartz Clasts Conglomerate?”.

I am open to the idea that Novo already perhaps started to hit a small portion of the new Pipeline conglomerate sequence when they drilled down dip at Purdy’s Reward. It also seems that De Grey Mining (and therefore Novo too) might have some small traces of Pipeline style conglomerates at the different “Wells” prospects many kilometers north-east of Purdy’s Reward/Comet Well. With that said, the Wells prospects seem to have mostly thick sections of the Purdy’s Reward style sandstone layers. Also, so far most nuggets that have been found by the De Grey Mining team seem to have been located near the thinnest conglomerate outcrop (Loudens Patch). Main point is that this Powerline style of conglomerates might be present at multiple areas in Pilbara, not only the fine sediment and the regular coarse conglomerates.

Going back to Novo

A new video with Brent Cook talking about Novo:

When I sit back and re-listen to interviews, read the new NR and think about some of the rumours that have been floating around during these last couple of months regarding how much better the outcropping conglomerates at Comet Well looked relative to Purdy’s Reward I have reached a few preliminary conclusions about what has happened, sentiment wise:

First of all we know that Comet Well has a much longer confirmed strike and Brent Cook and many others were under the impression that there were a number of gold bearing horizons. Since the strike is much longer at Comet Well, one would obviously assume that the multiple horizons that people saw was the overall nature of Novo’s conglomerates in that area. Ergo, investors and analysts on site was shown multiple kilometers of outcropping conglomerates with what seemed to be multiple gold bearing horizons. In the video I posted in the previous post Cook stated that he was looking for a thick conglomerate sequence with multiple gold bearing horizons and we all know that Cook invested in Novo and brought his follower along.

Then after the “infamous NR” that stated that gold was more or less limited to the basal contact and was 0.5m thick Brent Cook along with the market immediately assigned these assay results and geological characteristics found at the Purdy’s Reward trenches to be the true nature of all conglomerates over the tens of kilometer of strike. Basically, the market probably projected the Purdy’s Reward style conglomerates (single gold bearing horizon) on to ALL of the conglomerate strike in the area, when in reality it seems that the conglomerates become “double stacked” rather quickly down dip.

This leads me to believe that the fact that Novo was only allowed to trench the near surface outcrops at Purdy’s Reward might have lead to a big “fake out”. The market believed that the 0-5m thick Purdy Pay Zone was the true nature of the “tens of kilometers of strike”, when in fact after opening up the first trench at Comet Well, it really does seem that we in fact have multiple gold bearing horizons. If this turns out to be true, then the Purdy’s Reward mineralization might be the anomaly here, the potentially least mineralized conglomerate sequence going forward (drown dip).

We have heard a bunch of people say that Comet Well looked very different and that they did NOT decide to start working at Purdy’s because it was the richest, but simply because they had not gotten the permits yet to start trenching/drilling at Comet Well.

In hind sight, I am starting to see why the market and us outsiders who had never been on site got so surprised. Basically I am open to the idea that figuratively speaking, the Purdy’s Reward conglomerates might be the “tip of the iceberg” and that the Comet Well conglomerate sequence potentially is the next part of the iceberg.

Remember, the outcropping strike is much longer at Comet Well and one could assume that the seemingly richer Comet Well sequence is the dominant outcrop. To put it in a picture what might have happened that caused the perhaps unnecessarily violent correction was this: 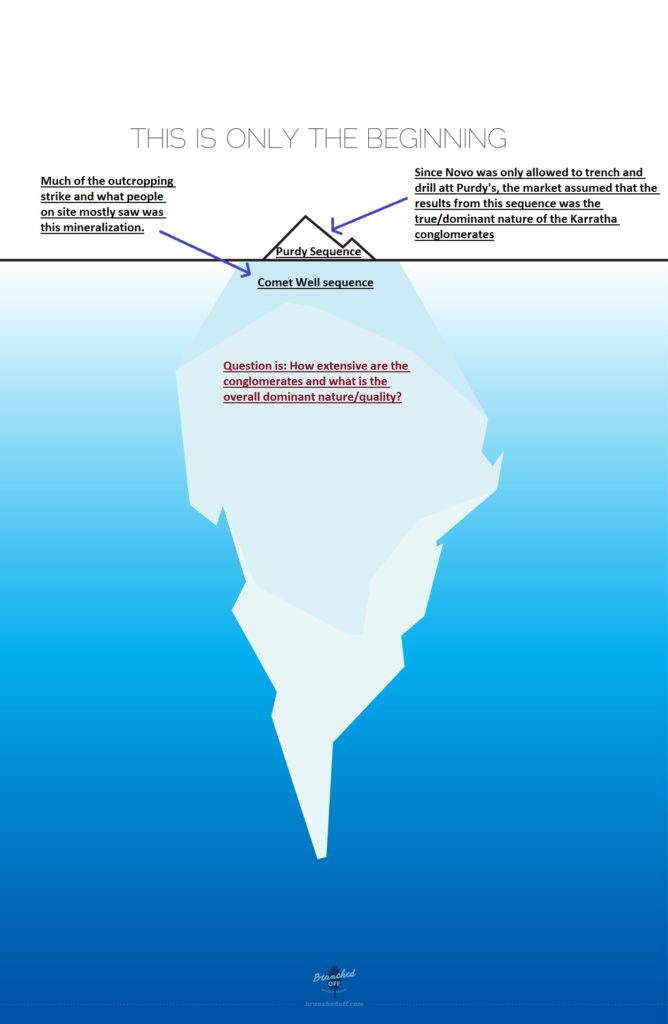 Tip of the iceberg?

The above section is certainly speculation from my part, but to me it fits the recent turn of events form a logical stand point. Why else would the talk of the town prior to the infamous NR be about “multiple horizons” and how much better Comet Well looked relative to Purdy’s Reward, followed by a steep sell off when Novo found only one “real” gold bearing horizon at Purdy’s Reward? This seemingly caught the whole market off guard, meanwhile the boots on the ground rumour mill was basically saying “wait until they start at Comet Well”. 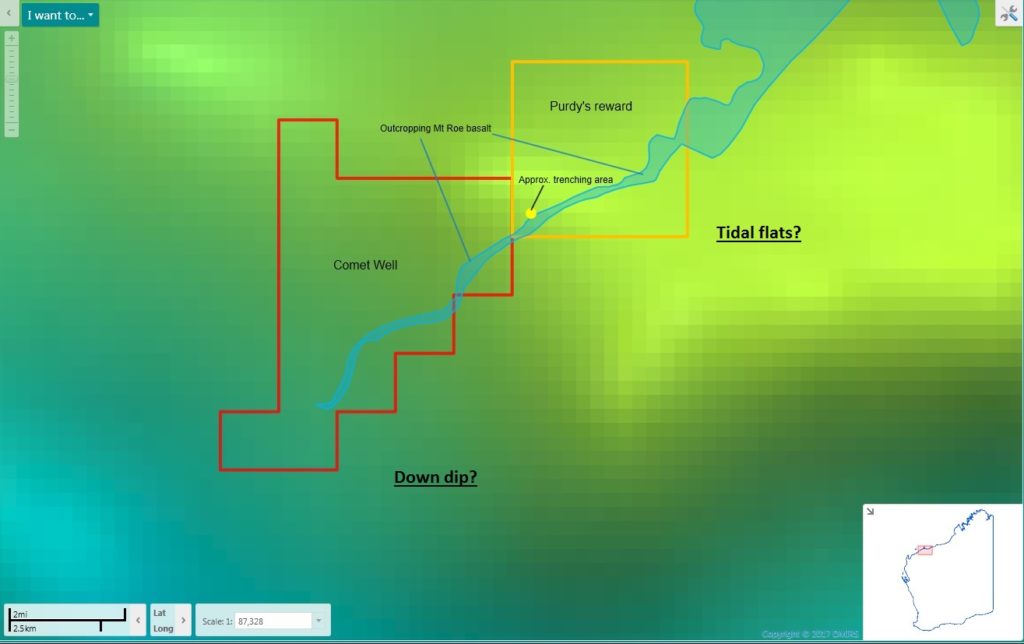 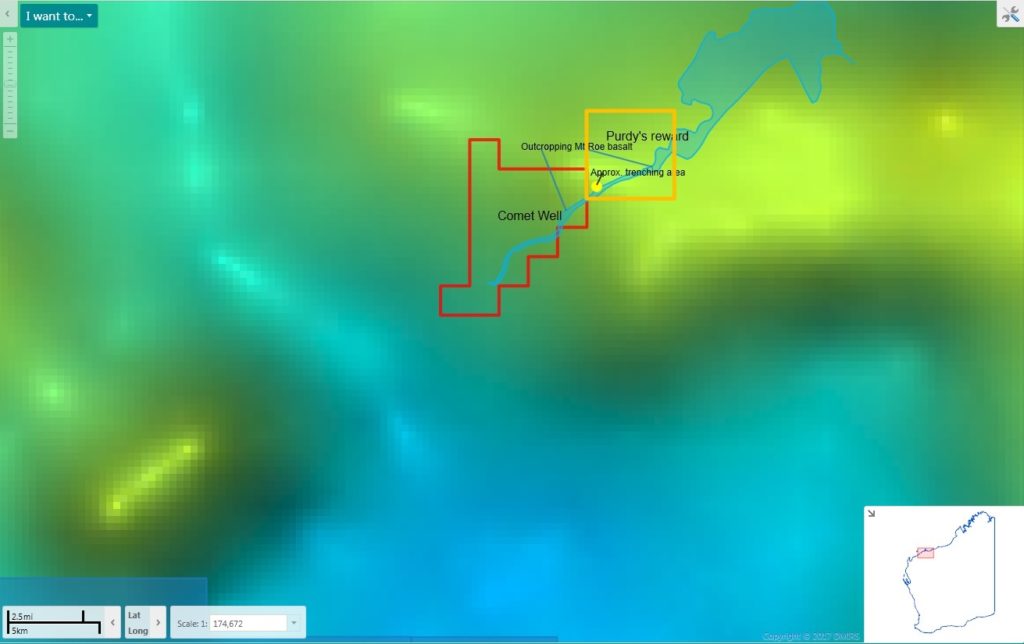 Disclaimer: I am a shareholder of Novo Resources and it has been my biggest position for the last two years. I am thus biased. Be aware that this article is speculative and contains some rumours. Always do your own due diligence and do not base any investment decision purely on rumours etc. This is a volatile and risky exploration story across the board. I have gotten no compensation from any party in order to write this. If you found this article valuable, then please feel free to let others know about it!