I took the weekend to digest the latest information regarding Novo and trying to work out how I believed the latest pieces of the puzzle affected the investment case. When going through the material multiple times I thought it might be worth it to make a post about it. since Novo is a very “information heavy” case and a lot of people are having a hard time staying up to date since most have regular jobs. Took about a day to transcribe, find sources and summarize the info etc. Note that this post includes my own thoughts, speculations and even some rumours that cannot be guaranteed to be correct. Enjoy! 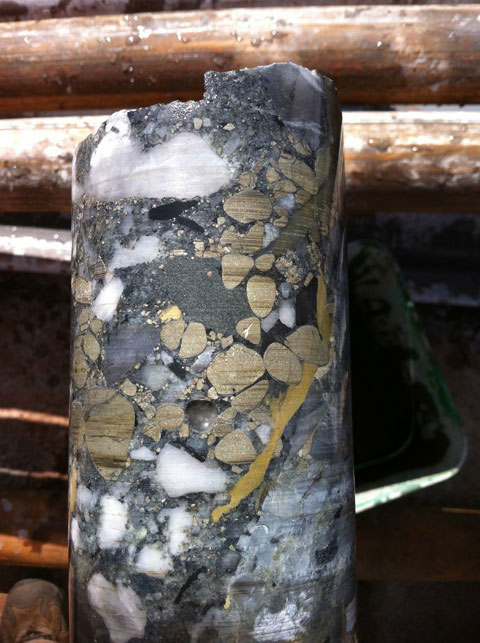 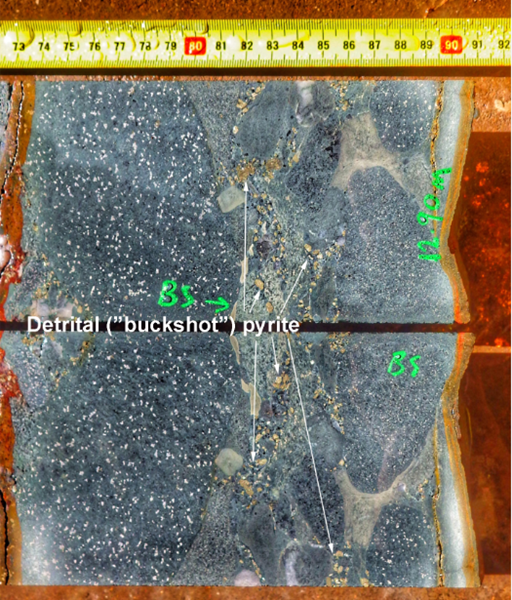 From Moriarty’s article in 2014 regarding Beaton’s Creek: 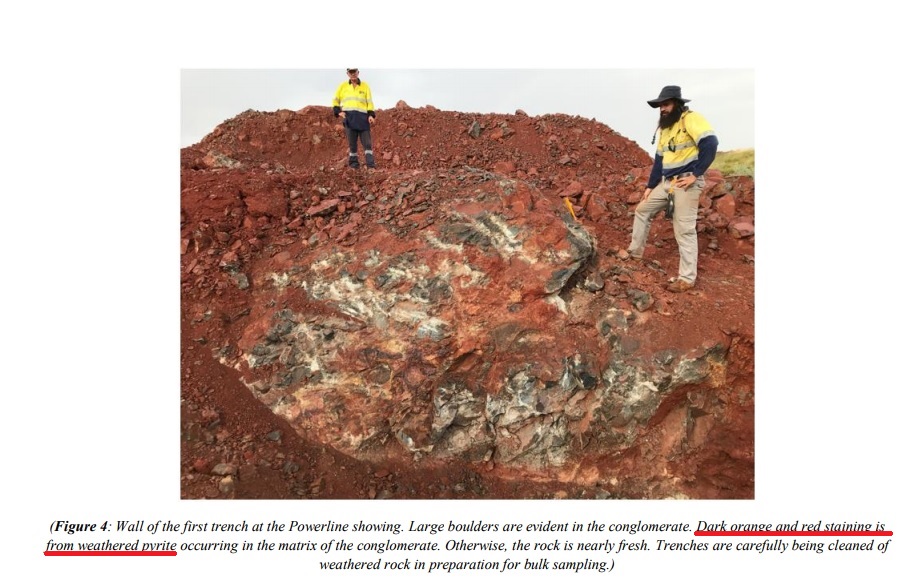 Mineralization looks to be different from purdy’s (as already stated by QH). Rob Beaton states that he pulled gold from “the guts” (matrix?) of what looks to be a big rounded boulder and that “there is gold in the rock”. This looks very different from Purdy’s Reward indeed.

In Novo’s latest video depicting the bottom sequence, one can see hard rock dominating vertically for at least a couple of meters. In the video above, the Comet Well style boulder seems to be sticking up and is surrounded by what seems to be more Purdy style bedrock. If so, this might suggest that the 15m Comet Well conglomerate (that has been confirmed by drilling) at Powerline  has detectable gold starting already at the top (unlike at Purdy’s where the nuggety PPZ is located at the bottom, on top of the basement).

Video From Comet Well That Was included in The Latest NR

If the old video from Comet Well does indeed show a boulder from the top layer of the CW conglomerates and Novo’s latest video shows the lowest part and upwards (as stated by QH), then one certainly can see what Quinton meant when he said they are getting detector hits from multiple horizons in this CW conglomerate at Powerline.

We still don’t know how high the gold mineralization goes in the new conglomerate sequence. QH said they have opened up about 7-8m so far.

I thought it would be interesting to revisit the data from the old CRA drill hole in light of the recent developments at Comet Well. This hole was drilled much further into the basin and possibly encountered what was believed to be some mix of Mount Roe conglomerates over 2km down. This section was estimated to be 51m thick: 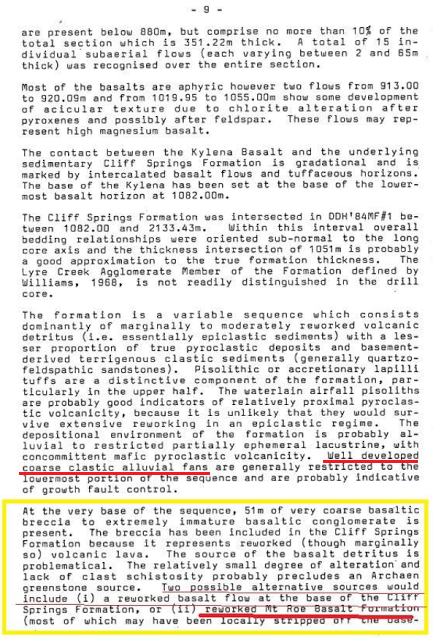 This is the same hole that has been mentioned to not actually having hit basement. Also, the fact that they hit spotty gold in the Cliff Springs (Hardey Formation), that sounds a bit like Beaton’s Creek mineralization. This might be a positive sign in regards to how widespread the gold bearing conglomerates could be in the Pilbara given the fact that the CRA hole was located very very far from Beaton’s Creek. Note that this is some high level speculation. 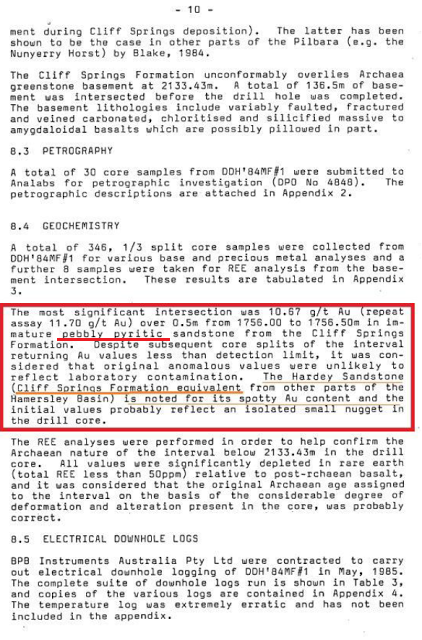 With the discovery of another thick sequence of conglomerates beneath the Purdy style conglomerates at Powerline, that also appears to be even richer, one could certainly argue that the odds of this area having economical gold has jumped quite a bit. Blue sky scenario would be the PPZ being present at Powerline, and that this lower 15m sequence is even richer. In that case the PPZ, which was the jewel at Purdy’s, might actually be the little brother here.

What is also interesting is the increase in pyrite and that the drill core is showing the presence of “pigeon egg” type pyrite which is similar to what Novo found at Beaton’s Creek. Beaton’s Creek is nuggety, but nowhere near as nuggety as the PPZ at Purdy’s Reward. Hopefully this opens up to some hope in regards to less nuggety gold being present on top of what is probably extreme nuggety mineralization being detected at the detector marks.

The presence of weathered pyrite would suggest the conglomerate sequence having been exposed to oxygen at some point in time. This leads me back to Quinton’s hypothesis that started it all: 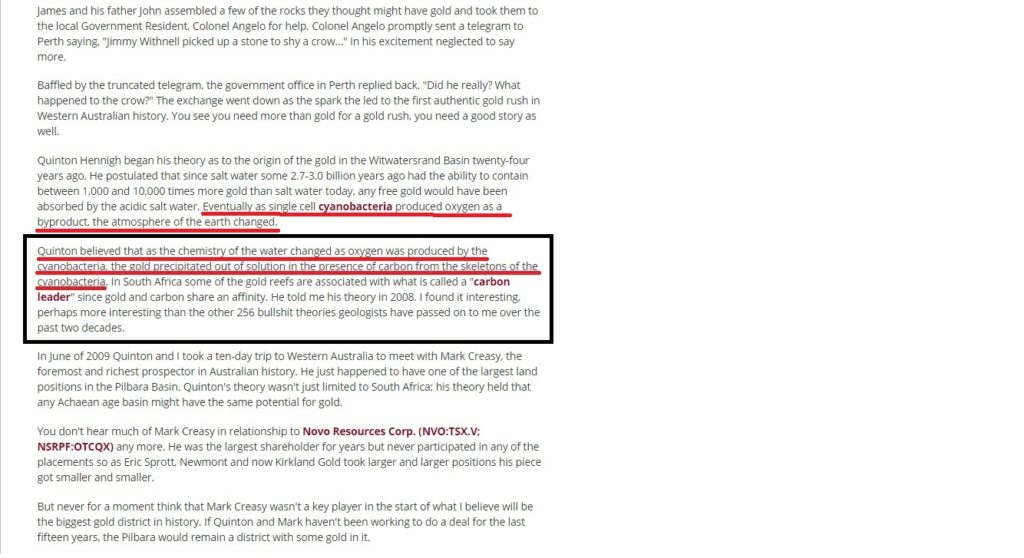 Now, we haven’t found a “carbon seem” etc, but the following infographics regarding Witwatersrand which was posted by Iskyhigh on Stockhouse.com springs to mind: 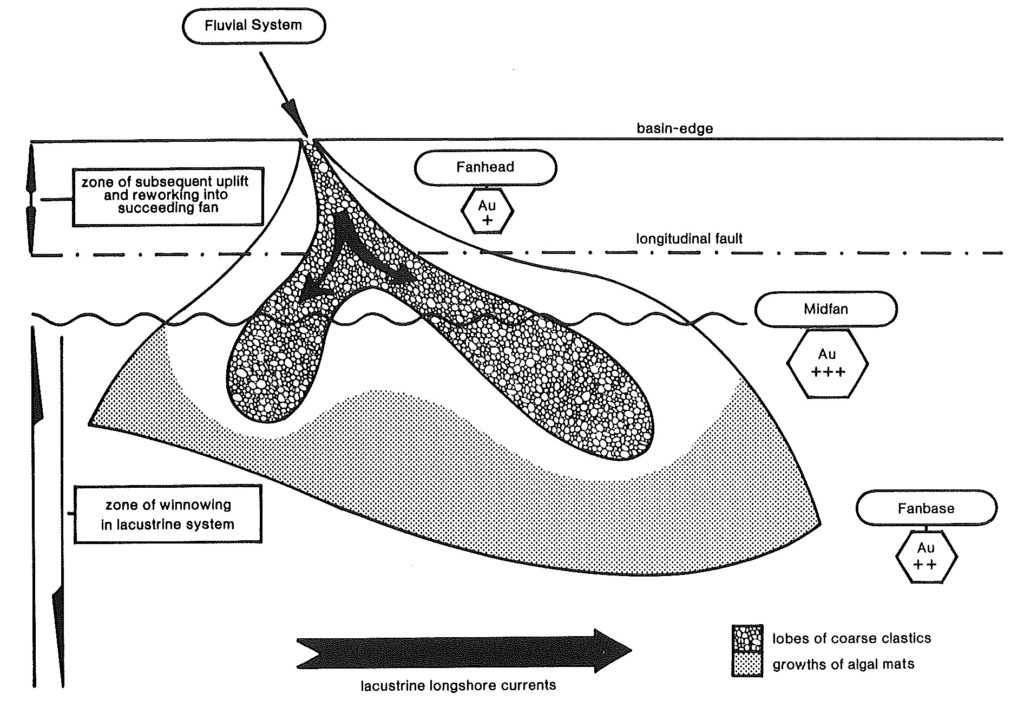 IF this comparison is relevant, then what we are seeing at Powerline might be the geology heading into the [Au+++] zone from the [Au+] zone since Powerline seems possibly much richer than Purdy’s Reward. Also, according to this slide, the “algal mats” are located around and in between the conglomerate “fluvial fan”.

Another slide (note the scale!): 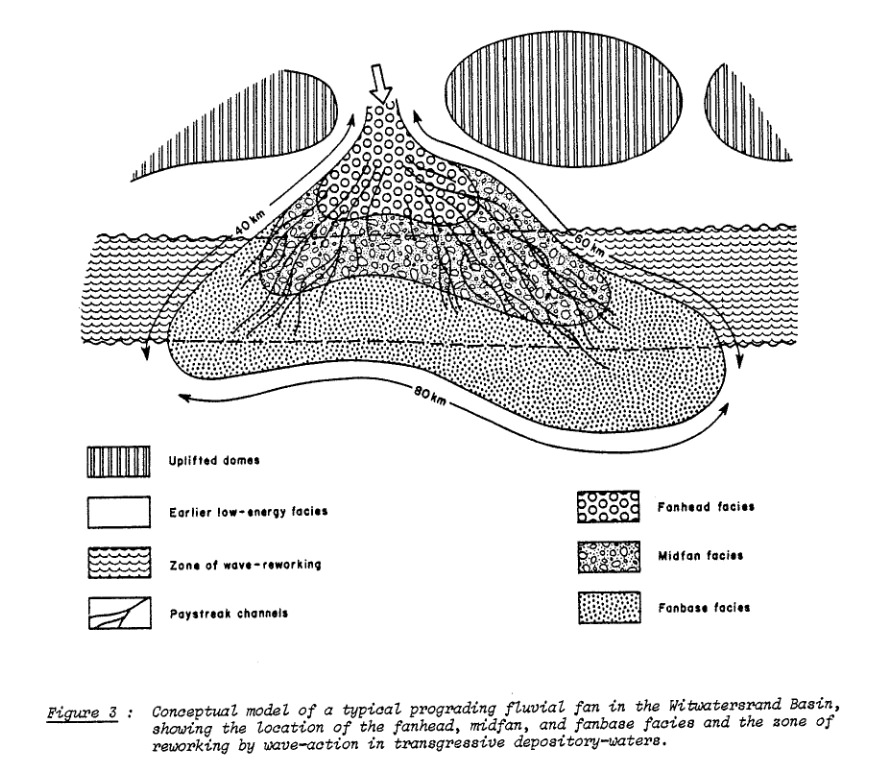 Panel sampling Comet Well is probably a bit lackluster in terms of efficiency since there are such large boulders present etc. What could be interesting is if these samples could show the presence of some more disseminated gold mineralization in the matrix (kinda like Beaton’s Creek). Ultimately I think we really need trial mining in this area, even more than at Purdy’s Reward. Suffice to say, this will take time to prove up, but it will hopefully be very well worth it.

One thing that I personally believe is important in the case that this new zone is richer and widespread is that the “deposit” as a whole will reach critical mass quicker, ie need less m2 to be proven up before one can say that this is a solid open pit/strip mine. The bigger/richer this gets, the looser the rules and regulations will be I believe. WA government is already keen in helping Novo advance… Are they going to let a (potentially) very big, near surface and extensive gold system just sit there because it hasn’t got a typical JORC resource?

Rumour Mill And Some Bayesian Inference (Reading Between The Lines)

[Bayesian inference is a method of statistical inference in which Bayes’ theorem is used to update the probability for a hypothesis as more evidence or information becomes available.]

EVENT A: Purdy’s Reward trenching and the discovery of the gold being pretty much limited to the 0.5m high grade PPZ (Purdy Pay Zone).

EVENT B: Comet Well (Powerline) trenching and the discovery of  another new conglomerate sequence with multiple (nuggety) gold bearing horizons.

Comet Well and Purdy’s Reward along with more areas in Karratha has a large and economic gold system present.

In light of the actions and rumoured actions taken by certain parties during/after [EVENT A], how does [EVENT B] affect the probabilities of the HYPOTHESIS being true?

Disclaimer: I am a shareholder of Novo Resources and it has been my biggest position for the last two years. I am thus biased. Be aware that this article is speculative and contains some rumours. Always do your own due diligence and do not base any investment decision purely on rumours etc. This is a volatile and risky exploration story across the board. I have gotten no compensation from any party in order to write this. If you found this article valuable, then please feel free to let others know about it!

One thought on “Novo Resources: Summing up The Latest Information”