I just wanted to do a quick post regarding some of the information and schematics that were included in the latest Novo News Release and to hopefully put the bulk samples into context.

“…this sample (THH: the basal contact) is notably lower grade, an indication that the basal contact is not as enriched at Comet Well compared to that at Purdy’s Reward.At Comet Well, gold appears to be scattered through a thicker section of conglomerate as evidenced by results from sample KX157 and the numerous detector strikes over several vertical meters of exposure in trenches.”

“Novo personnel recently discovered a new exposure of gold-bearing conglomerate within a drainage approximately 250 m southeast of the trench from which bulk samples KX157 and KX158 were extracted (please refer to figures 3 and 4 below). Current interpretation suggests this is the down dip extension of the gold-bearing horizon within the Upper Cannonball conglomerate.”

First of all, if I interpret snippet #1 correctly I take it that the yellow dots in the following aerial view schematic is detector marks for in situ gold nuggets. More evidence pointing to this is that the image includes so called “detector points” which are outside the blue striped fields titled “Nuggets Detected”.  These in situ detector points might signal nuggets that eroded from conglomerates found higher up and/or at other places, especially where their is “modern” drainage. However, although drainage points seem to have more detector points, there are areas where there is no drainage mapped but plenty of detector points (although not as concentrated as some drainage points). Second of all, the blue “nuggets detected” field stretches on to what Novo has mapped as basement in certain areas while there are only a hand full of detector points present there. This suggests that there certainly looks to be correlation, but not necessarily causation. Approximate bulk sample location is marked with a blue start: 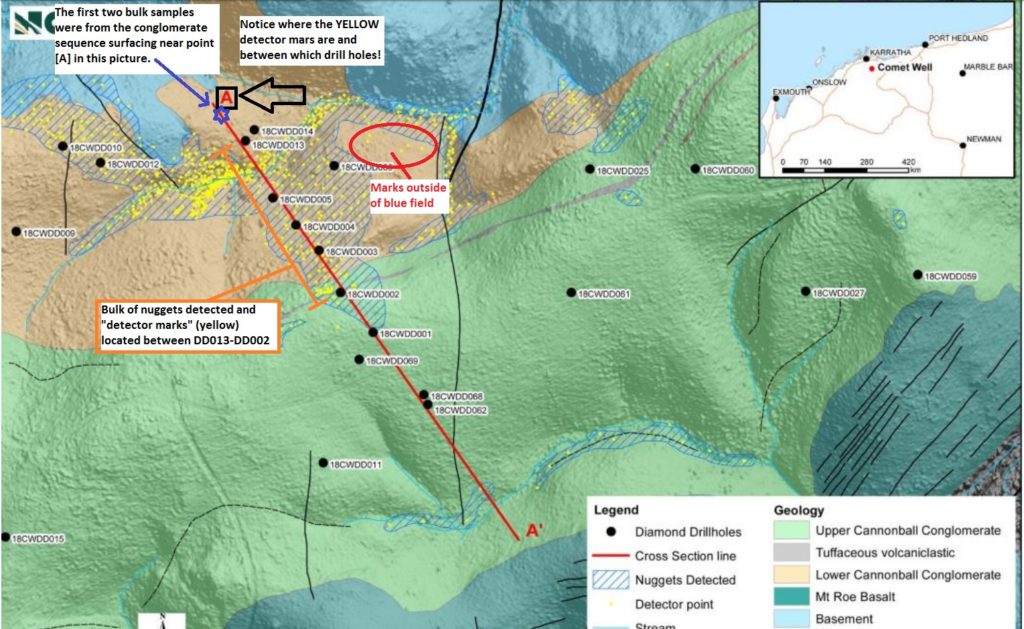 Just going by the data we see in [Figure 1] above it would possibly suggest that the area we sampled had basically no detector points, which of course point to the lowermost sequence being the least mineralized. This picture also suggests that starting from approximately DD013 there are continuous detector points all the way up to the surfacing volcaniclastic tuff which is the suggested marker for the upper conglomerate (which in turn might actually be the Purdy’s sequence). Thus, if most detector points are actually marking in situ nuggets then it looks like the bottom part would be less mineralized and that the gold is mostly located in the upper portion over tens of vertical meters. However, this next schematic from the same NR questions that assumption…

Figure 2. (Scale calculations was done manually by me and might differ depending on image size)

[Figure 2] above suggests the total opposite, namely that the detectable gold seems to be located towards the bottom. If this schematic is indeed depicting areas where the detector is signalling in situ conglomerate gold, then the schematic is basically saying that the CW bottom sequence has detectable gold from 0 to approximately 8 vertical meters at that location. Factors that point to this conclusion is that the basement furthest to the left in the picture show no “gold detected” even though it looks to be at a lower elevation and thus quite possibly would have “trapped” some eroded conglomerate gold. Also, the area around the RED vertical line I drew where the bottom part of the lower CW conglomerate is quite thick also looks to be located at a (relative) high. Why there is no “gold detected” further to the right in this schematic I do not know (and based on [Figure 1] gold was detected much further up alongside the drill path). Depending on the accuracy of the schematic one might infer that the largest nuggets would be located where there are larger boulder due to gravitational forces. Note that the Lower Comet Well sequence seems to be pinching to the south east at Cannonball and that the upper gold bearing conglomerate seems to instead be swelling to the south-east.

Lets begin with summarizing what the two different schematics possibly suggest in terms of nugget concentration:

FIGURE 1 (aerial view): Suggests that the detectable gold is mostly concentrated approximately half way from DD013 to DD005 where the Lower Comet Well (Cannonball) gold bearing conglomerate surface is approximately 6 meters vertically from the basement. From here there are detector points scattered intermittently all the way up to the tuff horizon where the surfacing conglomerate is approximately 24 meters thick. This would thus suggest that the richest gold bearing zone starts at approximately 6 meters vertically from the basement and extends all the way up to the upper Comet Well (Cannonball) conglomerate.

Figure 2 (Cross section): Suggests that the gold bearing conglomerate sequence in the Lower Comet Well (Cannonball) conglomerate package starts at the basement and extends up to approximately 8 vertical meters. This interpretation correlates with the RED ARROWS in [Figure 2] which is said to represent the “Target Au-Bearing Horizons”. Gold mineralisation starting from the bottom and getting richer a meter or two above the contact is also suggested by trench pictures and videos in my opinion.

The most probable interpretation in my opinion is that on a local level the Comet Well (Cannonball) gold bearing conglomerate sequence might be up to approximately 8 meters thick, at least locally. This might also be why for the first time the gold bearing conglomerate thickness was described as “several meters” up from “3-4 meters” as mentioned previously in interviews and “multiple horizons” as mentioned in previous News Releases. One thing to keep in mind is that some layers might be fluvial while others might have been deposited in more of a marine setting. It will vary a lot and there will be paleo-highs that acted as small barren islands due to the fact that erosional material was deposited around them due to gravity. We will have to wait for further clarification as to what interpretation is correct but I take this new description of “several meters” of thickness coupled with the two new schematics that it might be thicker than they first thought. What would be a real surprise is that IF the upper Comet Well sequence is indeed an extension of the Purdy’s Reward sequence because then it will be interesting to see if it is as rich as the rather thin 0.5m gold bearing horizon at the Purdy’s Reward prospect to the east. The fact that it seems that they are finding nuggets at the top of the sequence at Comet Well where it looks to be several meters thick according to the schematic in [Figure 2] (1-2m thick officially according to Novo) leaves me cautiously optimistic at least.

I would appreciate more discussions regarding the subjects that have been covered in this article!