As we saw a huge reaction in the Novo Resources share price today I would like to give my take on the News Release and other developments as of late.

(In short; This is the biggest over-reaction we have seen in Novo so far. It even eclipses the “Purdy’s fake out” which I wrote about a couple of months back.)

The most interesting events that have happened lately is in my opinion are as follows:

1) When it was announced that Kirkland Lake Gold, the mid tier gold producer and largest shareholder of Novo Resources (thus the biggest insider), was purchasing 4M additional shares of Novo Resources for $5/share from our Karratha partner Artemis Resources (SOURCE)

– Speaks for itself really… Biggest insider doubling down on their Novo bet just two weeks ago is a huge vote of confidence. Remember, these guys have been on site for ages and have FAR better knowledge than us in terms of how good Novo’s overall prospects and Comet Well looks. (Follow the smart money.)

– This is obviously huge. 250 km south (along the erosional flows from Comet Well) and they are finding high grade AND fine gold in the same strata!

3) Eric Sprott (director, second biggest owned and insider of Novo Resources) backed Pacton Gold who have been on a buying frenzy in Pilbara. (SOURCE)

– This also speaks for itself… Pacton gobbling up as much land as they can in a short period of time. Do they see a revaluation of Pilbara juniors coming I wonder (hence more expensive deals foing forward)?

4) NXGold extending their conglomerate strike and finding fine gold, where there isn’t even any mapped Mt Roe as far as I can tell. (SOURCE)

– A curious development. My proposed ASTER imagery tools correlates well with their staking and they are actually finding conglomerates a long way from any mapped Mt Roe. This of course suggests that the Pilbara Gold play might be bigger than we think. Remember, the near surface stuff is the most profitable stuff to mine, and thus the $/Oz value to apply should be much higher than any conventional gold ounce.

Setting the scene: Differences between the Comet Well sequence and the Purdy’s Reward sequence

“Up to eight discrete conglomerate beds are evident with some displaying characteristics of a fluvial (river) origin and others displaying traits suggesting reworking in a shallow marine environment.” (SOURCE)

Eight different beds, and the lowermost bed seems to host most of the gold. This is important because it shows that every bed is unique.

Further shows how the depositional environment at Purdy’s Reward changes back and fourth.

“The richest gold grades appear to be concentrated near the base of the conglomerate package immediately above the dolerite footwall.” (SOURCE)

“Samples of footwall dolerite yielded significant gold, perhaps reflecting penetration of nuggets into this unit from above.” (SOURCE) 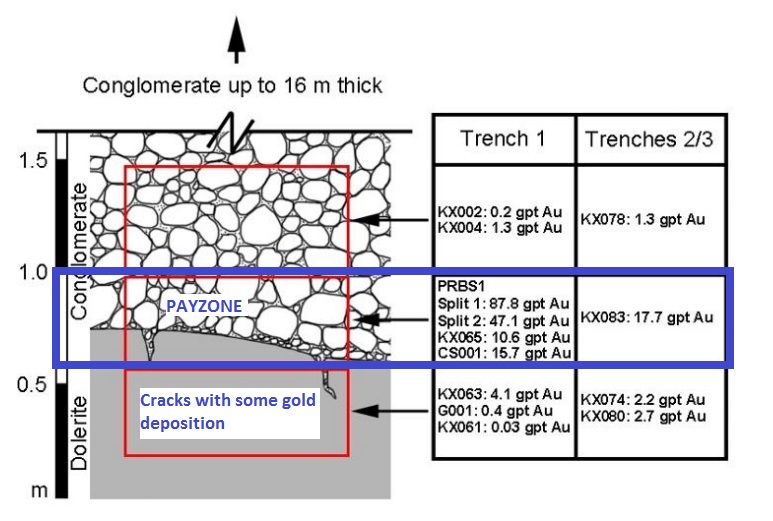 Here, the gold is located basically limited to the very BASAL CONTACT, and sometimes gold has fallen into crack in the FOOTWALL. The Purdy’s Reward conglomerate sequence has its own characteristics and is NOT equal to what we are seeing at Comet Well.  This is important!!

“Unlike at Purdy’s Reward where most gold nuggets appear to occur near the base of the conglomerate sequence, detector strikes have been noted in multiple horizons above the basal contact at Powerline” (SOURCE) 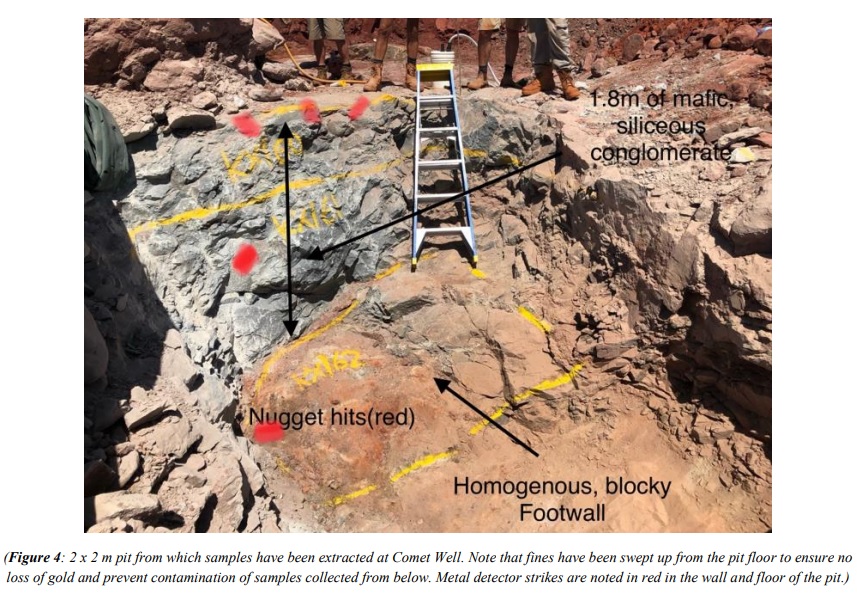 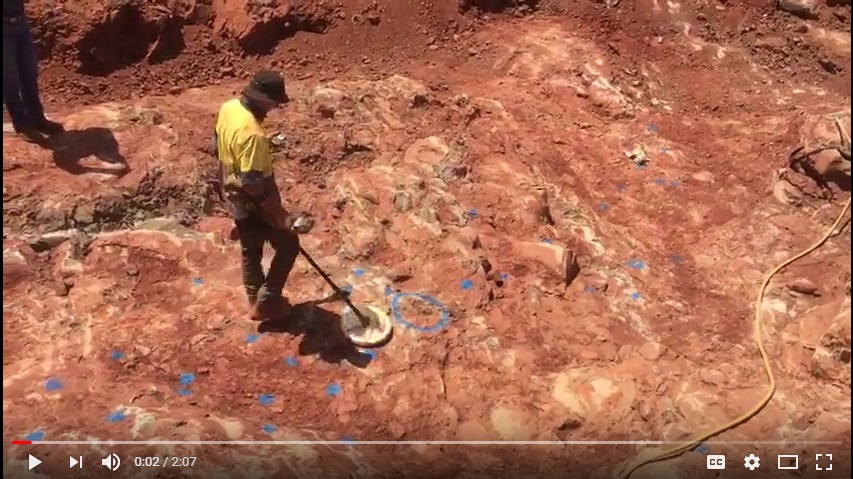 Notice the scale in the first picture of the lowermost portion of the Comet Well conglomerate sequence. 1.8 meters from basalt contact to the surface. Just judging by that small visual sample, the top that is around 1.8 meters from the basal contact is three times as rich as the stuff below it. We don’t know where exactly the basal contact is in the lower conglomerate but if I would have to guess, it looks like it gets richer the further up you go in the strata. Again, just based on that single visual sample.

Now, what and where did our two bulk samples in this latest release come from you ask? Well… 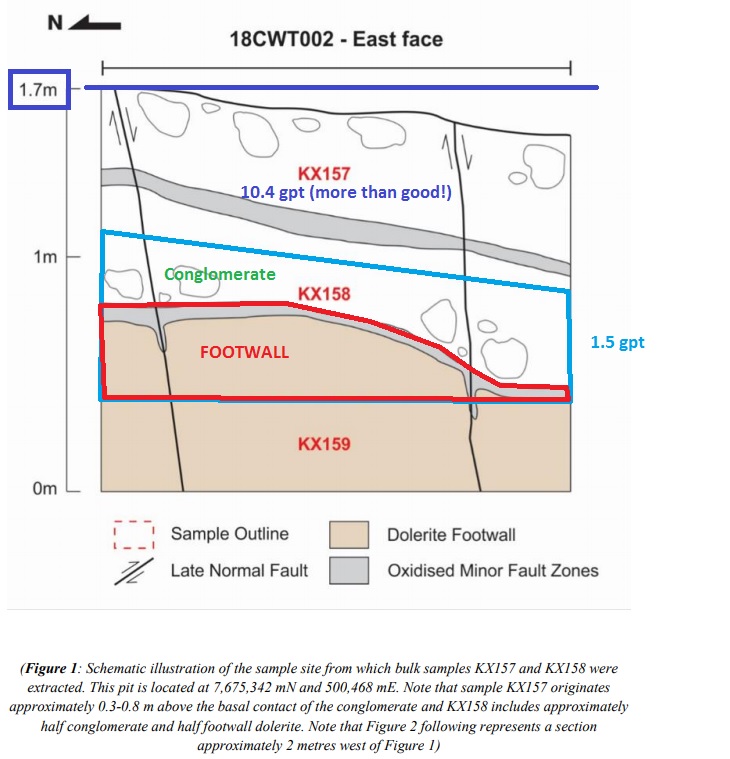 So, the two bulk samples were taken from about 0.4 m in that picture up to 1.7 m. Now keep in mind that the basement in the picture above ends at about 0.4 – 0.8 m, which means that we are sampling conglomerates no higher than 0.9 – 1.3 m up from the basal contact. That falls well under the seemingly much richer conglomerate seen located 1.8 m above the basal contact in the third picture up. Now you will also probably realize that there is at least 60% of FOOTWALL that went into that bulk sample that assayed 1.5 gpt. Here is what is said in the NR about the Footwall:

“Sample KX158 was collected immediately beneath KX157 from a panel approximately 0.5 m thick. Approximately half of the sample is conglomerate and half is footwall dolerite, a rock considered barren” (SOURCE).

It looks closer to 60% of dolerite to me according to the schematic… And that thing is BARREN, ie NO gold.

This means that approximately 60% of the material that went into the bulk sample was worthless, and thus we had 60% of waste rock dilution. In reality, that lowermost contact conglomerate assayed approximately 3.75 gpt. Not stellar but I am pretty sure that 3.75 gpt looks much better than 1.5 for most people.

More from the latest News Release:

We have “several meters” of gold bearing conglomerates in the lower Comet Well sequence, and the upper sequence which might correlate with the Purdy’s Reward sequence is 1-2 meters thing (4 times as thick here than at Purdy’s Reward if they are indeed the same unit).

3) The Comet Well high grade sequence is NOT limited to the basal contanct, in fact it looks to be one of the less mineralized zones.

5) If the upper Comet Well sequence (which is located on top of volcanic tuff) is indeed the same as the Purdy’s Reward sequence, then is it possible that Purdy’s Reward does have more gold beneath it and that we didn’t in fact hit basement?

6) Our two bulk sample assays we have gotten so far are probably from the least mineralized zones in the “several meters” thick Comet Well sequence. My bet is that 10 gpt is closer to the REAL grade for those several meters and that it might actually get better the further up we sample. I believe we might have an even richer zone around 2 meters up (direct opposite of Purdy’s Reward which has all the gold located directly on top of the basal contact).

7) We have 8 kilometers of strike and MULTIPLE gold bearing layers, and the market got spooked because of ONE, ONE 1.5 gpt sample (which was 3.75 gpt in reality) from ONE layer at ONE spot…!?!? If I would be back in my statistics class and use one data point and present them as conclusive evidence for anything over an area as vast as our strike * down dip extension, I would get an F – and get laughed out of the classroom. Doesn’t take a genius to put two and two together and realize that if 3.75 gpt near the basal contact is the worst grade in the entire gold bearing strata, then we are more than fortunate given the immense scale of the WIDE OPEN system.

Today we saw a fake out greater than the Purdy’s fake out and Comet Well looks to be at least 10 gpt on AVG in my opinion.  The conglomerate approximately 1.8m up looks even richer. With that said, the corporate actions really says it all… People that sold today are basically saying that they are smarted than the insider of insiders (Kirkland Lake) who ponied up $20 M just two weeks ago. Do people think that they don’t know how rich Comet Well really is? I dont, and I haven’t sold a single share. This journey is just beginning and we got 58 planned bulk samples left to prove that that is the case for starters. If the lower Comet Well sequence is several meters and averaging 10 gpt, then that will be one of the biggest deposits around. In fact, 10 gpt has been my “base case blue sky” scenario all along. Then we got 1-2 meters of what might be Purdy’s Reward style mineralization on top of that(!). We also do not know if we will find even more sequences down dip as the system potentially evolves.

Let’s not forget we also got the well advanced Beaton’s Creek project which has been said to get an updated resource based on bigger bulk samples, and that system is also wide open.

Two must read posts from today:

Comments from mineralised at CEO.ca