I thought it would be interesting to discuss Novo from some of the bears points of view and tie that into a Risk/Reward scenario. I got the idea from Goldfinger over at who suggested I could write something about why some market participants do not share my bullish view of Novo and what some of the main arguments are. This subject for an article made even more sense to me after listening to some arguments from “the expert” panel that contained Brent Cook, Mickey Fulp and David Erfle, which was hosted by the talented Cory Fleck from “The Korelin Economics Report”.

“So quite seriously, I as a neutral on this stock (a well-documented position) would like an answer to this. How does NVO justify its virtual $1Bn market cap (those cheap warrants must be counted in)?

The main points from the bears (“neutral”) point of view seems to be:

All fair points and hurdles that we will have to overcome in one form or the other.

First of all, from what I see I take it as most of the bears put no emphasize what so ever on 1) the sheer scale and potential of this gold system, 2) That we already have confirmed that the Hardey Formation in the east has already got a resouce in the Beaton’s Creek project and that we have a very big Hardey Formation land package there that is still wide open, 3) That Novo isn’t even done in terms of evaluating the Mt Roe conglomerate strata and the distribution of gold, 4) That as of late, Novo has aired the possibility that the less coarse sandstone/conglomerate sequence between the coarse gold sequences might contain (finer) gold, 5) That Novo has already found MULTIPLE other prospects with confirmed gold bearing conglomerates 6) That marindi has been finding high grade fine gold at Bellary Dome, where Novo also has tenements, 7) That Novo recently discovered that they seem to have a gold bearing marker that is easily distinguishable in core drilling (the volcanic tuff), 8) That we haven’t even sampled the more preserved and thicker tuff horizon to confirm whether it contains fines for example 9) That The lower Comet Well sequence seems to host smaller but more dispersed nuggets than the Purdy’s trenches which were the first trenches to be opened up and starred in the “imfamous” trench video with detector marks.

The heart of the matter (in my opinion), is that this is a constantly evolving story, and that a lot of the bears/bashers haven’t taken the time to do follow up DD after they (again in my opinion) prematurely threw up their hands when they saw the Purdy’s 0.5 m thick horizon and concluded that there is no way to put a resource on this. We are finding out new stuff in terms of the conglomerate characteristics and gold distribution all the time and thus it is “dangerous” to be drawing conclusions based on 8 month old data when the market had only seen and heard information regarding the 0.5m Purdy’s Reward sequence with ripped up tuff.

This is what Quinton had to say in an earlier interview:

From the conference call we learned that a lot of work is going on in the background and that we have our own in house environmental permitting team for example. We have also heard discussions about the potential for getting a quarry permit as a plan B. Not only that, but our largest shareholder and thus insider in the form of Kirkland Lake Gold is a mid-tier miner and one of the best performing producers around. Kirkland Lake Gold put up $20 M to double down on Novo Resources just about three weeks ago when they bought the shares from Novo’s partner Artemis Resources. Are these guys completely clueless? What about the rest of the major shareholders who haven’t sold and didn’t sell even when the stock was trading at around $9 and they mostly knew about the extreme nuggety Purdy’s Reward(?). This is not chump change we are talking about either, and despite that, they haven’t sold… 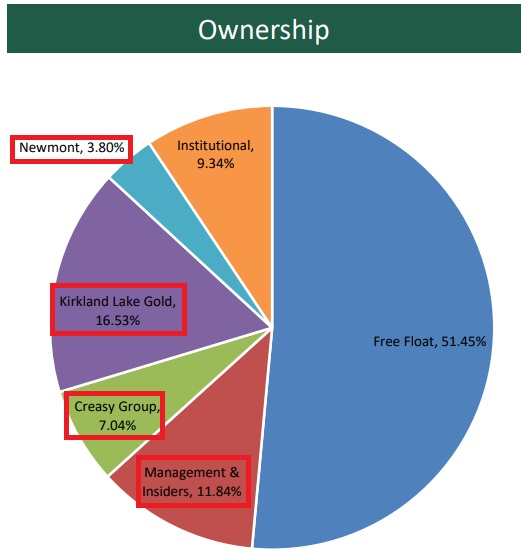 These guys have a serious information advantage compared to us bulls, and especially some of the bears who doesn’t seem to be up to speed at all in terms of news flow or the geology. Don’t get me wrong, this is certainly not an easy story to stay up to date with given the fact that new research reports are being found by internet sleuths all the time, coupled with constant news flow from Novo and other juniors that are proving up mineralized Mt Roe conglomerates all the time down there.

Furthermore, I think some bears are overly focused on the negatives, and seem pretty much oblivious to the potential upside. The clues point to this having been a basin wide event since they are finding gold in the same strata about 400 km East-West and 250 km North-South so far. Basically where ever companies find edges of surfacing Mt Roe in the West and Central Pilbara. Yet the notion seems to be that a market cap of $700 M to $1B, Novo MUST be priced for perfection. How on earth did they come up with that conclusion given the mounting evidence of possibly having multiple outcrops with the same mineralization?

What if Everything in Karratha Goes Wrong at Comet Well?

Well, then we would have to either find conglomerates with finer gold (like potentially what Marindi has found) and or go back to the Hardey Formation which is already de-risked and has been proven to be able to get a bankable resource. I would again re-iterate that we have a very big Hardey Formation land package with at least two prospects already mapped, and Beaton’s Creek might very well get a resource upgrade to some degree soon. We also have around $70 M in cash, which will be hard to not get some value out of, even if it would be going back to the Hardey Formation in the east.

What if Everything in Karratha Goes Right?

What if all those events materialize in the future? What if some of them materialize?

Very varying but the absolute blue sky scenario could be worth hundreds of billions, ie thousands of percent in the long term.

I am the opinion that the bears have done too little DD and focus mostly on the negatives and don’t even bother thinking in terms of probabilities, instead they think in absolutes, which in my opinion is a very grave mistake.

I occasionally get some ridicule because I have a poker background. This is kind of ironic since I think my many years of playing poker has cemented the notion of viewing every investment from a Risk/Reward perspective. There is no time for black and white (absolutes) thinking and every % counts. There are plenty of scenarios where it is mathematically correct to go all in with even 25% of success due to the fact that the amount you win when you come out on top makes up for the losses even though they will materialize more often on balance (like in a multi way pot).

What the true probability is for every aspect of this play is impossible to get exact by the way. Assumptions must be made and those are all subjective. Being 100% sure of anything is irrational, I just think that the upside risks trumps the downside risks, simple as that.

And to touch a bit on Cook’s statements. I think he is also missing the forest for the trees. Even without possibly being able to extrapolate far, Comet Well looks to be rich enough that it pretty much wouldn’t be needed. They have 8 km of fossiker strike that we know of, and they have already seen at least the upper MARINE tuff sequence is mineralized 250 m to the south-east. I am pretty sure that Kirkland Lake and Novo are 99% sure there is more then enough in situ gold at Comet Well to warrant a pretty large operation, bankable resource or not. So, if we won’t be able to drill up bankable resources, there is obviously many spots where it is daylighting around Pilbara and might be of the same quality as Comet Well. Now, Cook said “yes I think you probably can make money mining it”. That’s a long way from Keith Barron’s view of this being the lowest cost gold operation in the world. If Barron is even close to being right, then they could put up plants all around Pilbara in the future where they have already confirmed gold bearing conglomerates and Novo would possibly be almost printing money (again, drillable resource or not).

When the bears makes it sound like Novo is priced to perfection, in other words that there is no discount due to hurdles like the nugget effect, I just shake my head and realize they haven’t wrapped their head around the sheer potential scale. The (relatively) small sliver at Comet Well alone might very well host around 10 Moz. Is say 10 Moz of potentially ultra low cost gold reflected in even the fully diluted market cap when you subtract Beaton’s Creek, all the other prospects and the current cash position + options? Even when accounting for permit and construction costs? I certainly don’t think so. How about say “even” 50 km x 50 km (2,500 km2) of prospective ground out of a total 10,000+ km2 land package? Just play with the thought that if Barron is correct, how much dough Novo could be bringing in in a few years if they got Beaton’s Creek, Comet Well/Purdy’s and some of the other prospects up and running. If we were to bring in hundreds of millions annually, there is no way the SP and thus market cap would be at these levels(!).

A year or so ago I listened to interviews with Quinton and I calculated that they were expecting sub $500 AISC for Beaton’s Creek and the original plan was for a 2,000 tpd operation if I remember correctly. Now that kind of operation would bring in some serious cash, and if we do get upgraded resources at Beaton’s Creek, those numbers would probably look even better.

In my opinion it’s wrong to focus on only the risks in the Risk/REWARD calculation. Especially when you don’t seem to grasp what that REWARD number might be. Pilbara requires tonnes of due diligence to even remotely grasp the potential and what evidence there is for how big this potentially is. If the bears only focus on the problem that Novo and Kirkland Lake are working on solving, and doesn’t understand the pay off if they do, then no wonder they are bearish. Everyone has to make up their owns minds in regards to outcomes and the probability of said outcomes, and invest or not invest accordingly.

One thought on “Novo: Bull and Bear Views”