BC: Ore Sorting and Nuggety Gold

Quinton talks about the potential of ore (mechanical) sorting to upgrade and include lower grade material in a mining scenario: Kereport interview

2013 NR: “Hole BCRC13-019 is the first Novo hole drilled deep enough to test for the Grants Hill mineralized reef package on the downthrown side of a northwest-trending fault that cuts though this area (see attached figure 1: Drill Hole Map). This hole encountered 16 meters at 1.29 grams per tonne (“gpt”) gold including 3 meters at 4.42 gpt gold. Interestingly, this hole continued in conglomerates with low-level mineralization grading approximately 0.2 gpt gold for an additional 130 meters below this horizon. Such a thick footwall halo has thus far not been seen elsewhere at Beatons Creek” 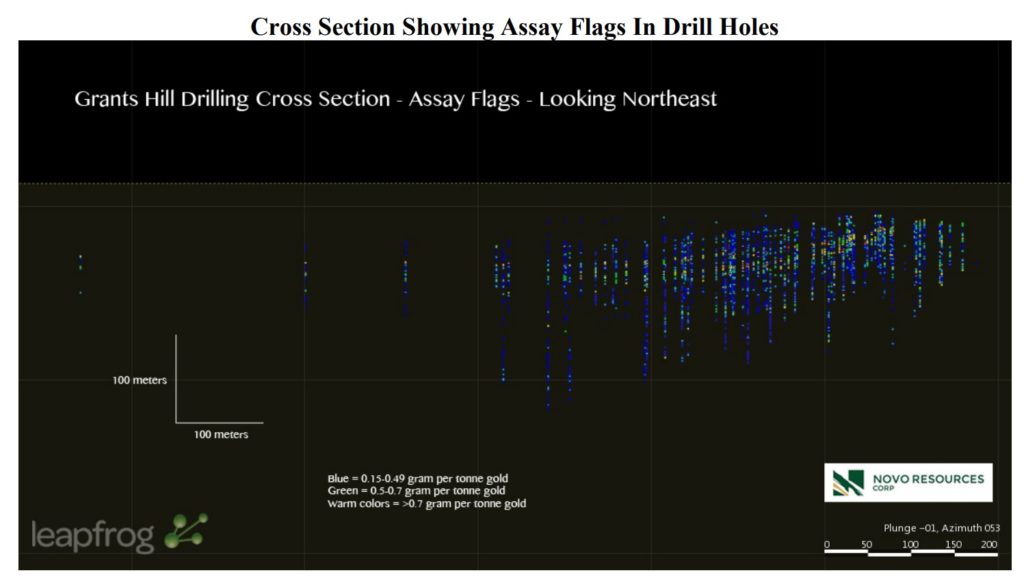 As you can see, the total mineralized package is much thicker than one would have guessed. However, it’s only the thinner high grade reefs that have been included in the resource as far as I know. If ore sorting were to be successful in upgrading parts of the lower grade halo then that could potentially add some tonnage obviously (note the scale).

The nuggety nature of Beaton’s Creek might also leave some upside surprises in a mining scenario. One example is how different types of drilling techniques leads to underestimation of the grade. This next slide is a slide from a news release done by a previous operator who worked the Beaton’s Creek project many years ago (Wedgetail):

Snippets from the same release:

“A 20-hole program of RC drilling was recently completed at Beatons Creek by Wedgetail to check the results of previous shallow RC drilling undertaken in the early 1980’s. The previous drilling was mainly limited to the area around the historic hard-rock workings and penetrated to the base of oxidation, at around 20 to 45 m. Numerous low-grade intercepts were returned by the early RC holes, but preliminary modelling of these results suggested that the mineralisation was sub-economic. In contrast, the results of the Wedgetail check RC drilling are far more encouraging. (see the drill hole plan, cross section and table of intercepts that follow). For example, drill hole BCRC0001 intersected 7 m grading 2.88 g/t from 6 m depth, and drill hole BCRC intersected 15 m grading 1.45 g/t from 7 m depth. Pair comparison of the results where Wedgetail drill holes twinned the early drill holes (i.e. <2 m separation) suggests that the main difference between the results is the poor representation of higher grades (1 to 10 g/t) in the assays from the early drilling. The most likely cause of this discrepancy is poor sample recovery during the early RC drilling, which would not have employed a face-sampling RC hammer, unlike the recent Wedgetail drilling which achieved a high overall level of sample recovery. “

Then we have the bulk samples table which was released by Novo in February, 2019: 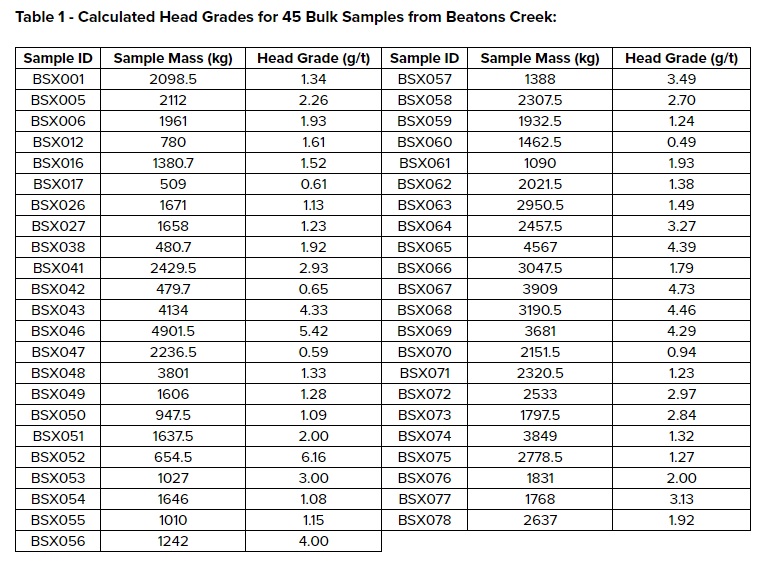 I have talked about this before but as you can see, the grade tends to increase with the size of the bulk sample. The second highest grade sample came from the largest sample which is sample BSX046. This sample had a head grade of 5.42 from 4901.5 kilograms of rock. The samples beyond that which had a sample mass of  at least 3 tonnes or more graded; 4.46, 4.73, 4.39., 4.29, 1.79, 1.33 and 1.32 gpt. The non weighted mean grade of the >3 tonne samples was 3.47 gpt while the weighted mean value  for all samples was 2.55 gpt. That’s 36% higher mean head grade in the >3 tonne samples compared to the weighted mean grade for all sample sizes. If this indication of higher grades in larger samples translates into a mining scenario (which should benefit even more from the nugget effect obviously) then that could mean a big boost in profits relative to the base case scenario. Not only would head grade and thus margins be higher but it would also mean that the total gold resources would be quite a bit larger in reality as well(!).

Further signs of possible upside surprises would be the fact that BC bulk sample material that was sent to Tomra and Steinert for sorting tests showed a significantly higher grade than expected. Material assumed to have a head grade of around 2.5 gpt (as per the resource numbers etc) actually graded 4.2 and 5.72 gpt according to Tomra and Steinert. Quinton talks a bit about the surprising jump in grade in THIS Kereport interview from January. “Even” a 10% hike in true grade would be a very significant boon if one assumes that the current average grade on paper was more than enough to get Sumitomo interested in the Beaton’s Creek project. I would thus expect that any hike in true grade would go straight to the bottom line and could add a lot to the true NPV of Beaton’s Creek.

So, am I open to the possibility that the true grade will be higher than the number in the resource estimate?

Yes, I think it is conservative and underestimates the true grade due to the nugget effect. If true, it will lead to a positive surprise when/if Beaton’s Creek gets put into production. If parts of the lower grade halo can be economically mined as well, then that would be another positive surprise. The main takeaway is that nuggety gold mineralization can show different realities depending on sampling techniques. The true grade will not be known until a full on mining scenario. With that said, the nugget affect tends to lead to positive surprises in a mining scenario… Food for thought.

Here is a slide from a 2015 News Release that highlights why the nugget affect often leads to under representation of the true average grade while sampling: 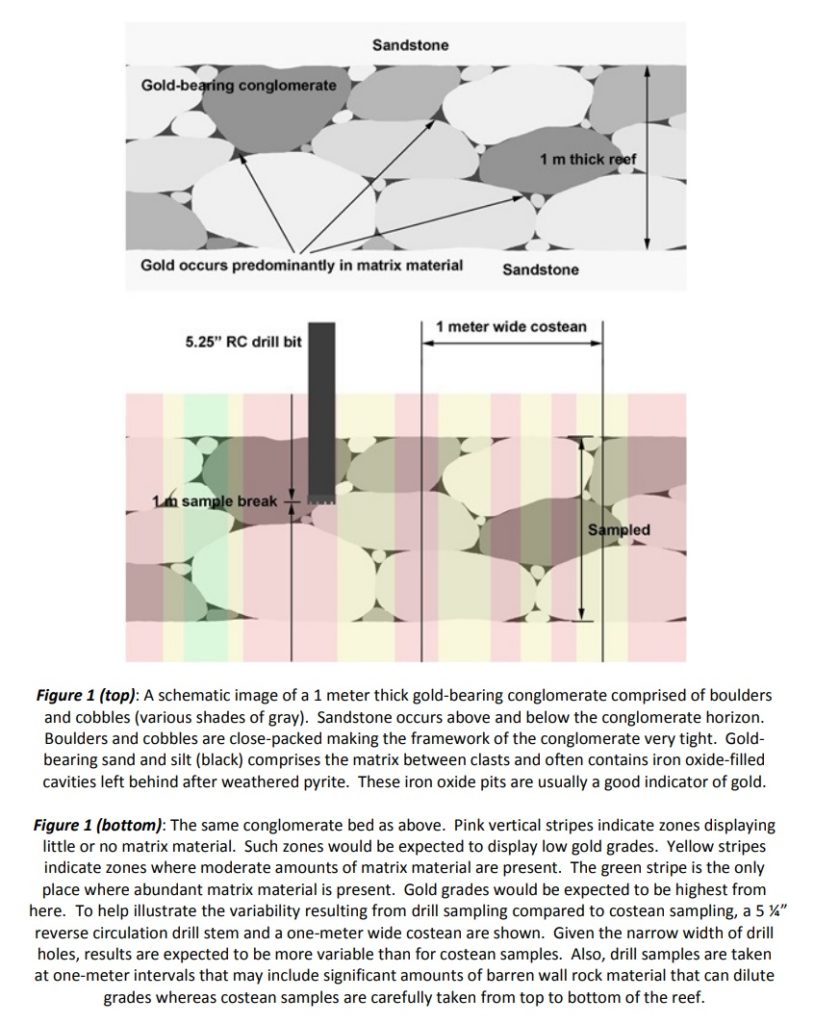 … How many investors do you think are familiar with how the nugget affect works in such a deposit as this?

One day, the nugget effect will (should) be translated into reality by Beaton’s Creek ore going through a mill. The market might not care about these “esoteric details” right now, but if there is one thing that most people can read, it is a cash flow statement. I consider my increasing share count in Novo to partly be “front running” a time when the real time positive results from the nugget effect might be painfully obvious to the market. And hopefully we will soon see a fuse being lit, if you know what I mean, and we can begin the count down to that very day.

Lastly, what if the the true grade of the thick halo mineralization has also has been understated due to the nugget effect…

There are no guarantees, but it’s at least something to keep in mind for a Novo shareholder.

Note: I am a shareholder of Novo and the company is a banner sponsor. Do your own due diligence!