Trying to Keep Greed in Check

It’s hard not to get influenced when seeing many bombed out stocks and even large producers go on an absolute tear from the “Corona bottom”. Some are up more than 100% and I can feel the very human urge of FOMO starting to set in. Selected flashy charts makes me want to just jump into ye run of the mill producer because that is where the highest beta is.

I got that urge a couple of days ago.

Stick to fundamentals and stick to a longer time frame than the market.

Producers might go up faster and harder than other companies in the beginning but would I be “stealing” value by jumping on?

On average I would say no. It’s not that I think the majority are expensive (there are still some real cheapies out there IMHO!), but at the same time I don’t see why most “should” go up 100% over a two year period, assuming gold price doesn’t budge from here. That’s pretty much my goal and basic investing criteria…

Try to find companies where I think there is a good chance of them returning a double within two years based on improving internal fundamentals. Now, it might not sound like much given that there are already juniors out there that are up 100% within a month, but one gotta remember that such share price appreciation is an anomaly. Furthermore, after said appreciations, the “easy money” is probably already made. If I could select a range of stocks which would return 100% on average within two years, that is almost a CAGR of 50%, which is ridiculously good. Could the hottest stocks and producers which have already rebounded hard produce such returns within the next two years? For sure they can. Is it likely? Yeah I actually think so due to the macro tail winds in gold. Is it something I should bank on when picking gold stocks? I don’t think so.

I want to pick companies that should do OK if gold goes sideways to down and do great if gold goes up. I don’t fancy the thought of owning companies that can pretty much ONLY do well (or even great) if gold goes higher. I want to have a high chance of my portfolio compounding EVERY year and not just in the years when gold is lifting every boat.

Suffice it to say that I quickly calmed down and reminded myself that such a game plan ought to be the most efficient one when it comes to building wealth through the magic of compounding. We all know the story about the hare and the tortoise. I want to be the tortoise even though it requires much more discipline and less excitement.

… That is a very lucrative proposition to me.

Meanwhile, everyone wants to get rich tomorrow and most investors/speculators don’t have the patience to wait even one year for a 100% return. If everyone is trying to do the same thing, as in getting rich tomorrow, is it a surprise that most stocks that are perceived to potentially be able to deliver that are often overvalued (and vice versa?). I would even argue that more people than you think would have a hard time sitting still in a stock if they were guaranteed that it would return no less and no more than 50% in one year. Why? Because everyone gets flooded by stories of stocks that will “rocket” tomorrow and people think that the opportunity cost is too great to sit in a stock that “only can deliver 50% in a year” even though a continuous supply of such stocks would guarantee riches beyond belief in the long run.

The above is something I constantly have to remind myself of. I remind myself that I should have a longer investment time frame than the marginal market participant.

You have probably seen comments like “Nothing will happen here for a few months so I sold and will come back later when things are happening”. I see it all the time (as recently today as a matter of fact). On the flip side, how many times have you seen investors/speculators say things like “I bought company X because I think it will be worth 100% more within two years”. I honestly don’t know if I have ever seen that. I would argue that 100% in two years is considered “dead money” by most investors/speculators in this sector. I find this to be very interesting given that almost no one in the world can produce such returns except for a short period of time. Just look at the HUI Gold Bugs index: 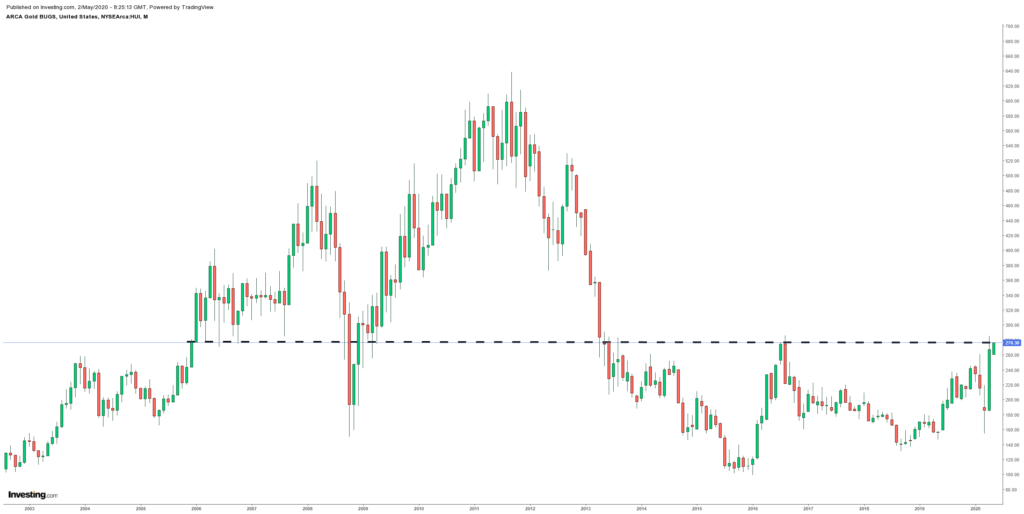 Why did that happen? Probably because the average company in the index did not go up based on their internal value creation abilities but because their margins expanded with a rising gold price. When that rug was pulled they crashed. Many probably also overpaid for growth near the top which they then paid dearly for during the bear market.

Never forget how hard it is to make money in the mining sector, especially over a full cycle. Sure, you might have a few 100% percent returns during the mania, but it pretty much always means that the companies will also be very overvalued. When the mania turns, and you haven’t gotten out, you might very well give back all of the gains and then some. This is why I think it’s important not to focus on what companies you think will “go up the most” but rather what companies will have unlocked the most value within a longer time frame than the marginal buyer/seller uses to base their “investment” decisions on. This would give you some margin of safety for when the tide turns since the fundamental “floor” will be higher. The same could not be said for most companies. Imagine what Barrick would have to do in order to increase their intrinsic value by 100% without the help of a rising gold price. They would need to find another Carlin Trend basically. Does that seem likely?

Majority of companies are not serially successful value creators which means that one is forced to become a trader. Buy low, sell high. Buy the crash, sell the mania. Rinse and repeat.

If you do happen to find a value creator you’re in luck.