An ounce in the ground is only valuable if it can be recovered economically.

Thus, time to economic recovery is a big deal…

What is the value of a project that is fully permitted, shovel ready and is worth $500 M on paper?

What is the value of a project that is not permitted, shovel ready but is also worth $500 M on paper?

This means that de-risking efforts such as environmental permits etc are quite valuable because it means that a given income stream is theoretically closer at hand.

This is something that is seldom discussed because juniors are de facto “trading sardines”.

If a junior finds something that would be worth $1 B in today’s money but will realistically not be fully permitted and shovel ready in 10 years then the NPV today would be $385 M with a 10% discount rate and $614 M with a 5% discount rate.

Two important factors to consider when it comes to what a suitable discount rate would be is that a) The mining business is very risky and b) Rates around the world are at all time lows.

Is this something that a lot of investors have in mind?

I don’t think so.

Are there many investors in this sector?

Honestly, I don’t think so.

This sector is so bad on average that most are forced to become traders.

Which theoretically can mean that if the acquirer paid full value (full NPV at the then prevailing gold prices) for a project then the value of that asset could be down 70% in five years (during the beat market) and the time value of money dictates that the value in hind sight was the 5 year discounted value of the remaining 30% in NPV.

Crude example of the actual NPV of a project that takes 10 years to get fully permitted and shovel ready: 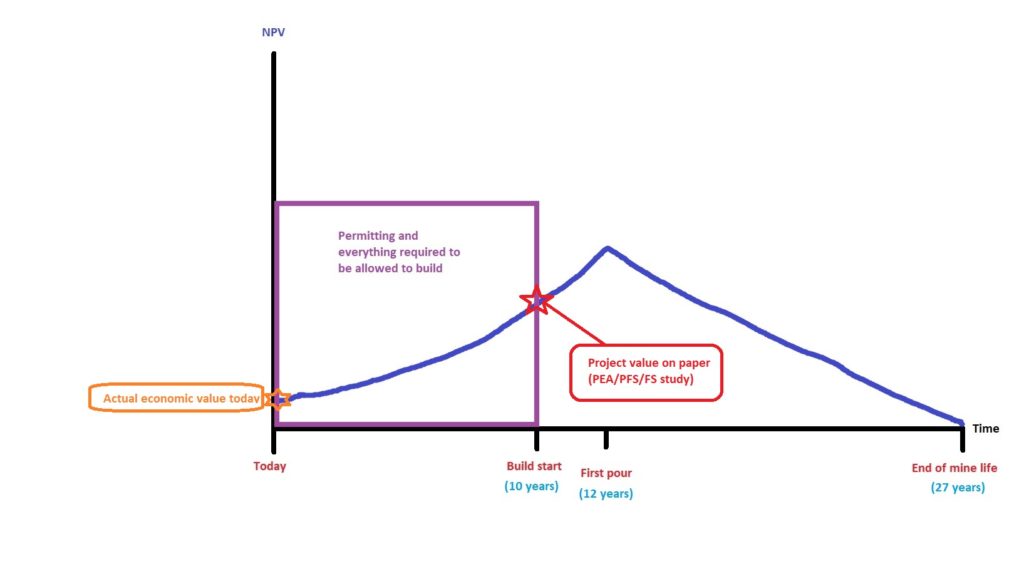 Some examples of the value (cost) of time:

… After reading this article I hope someone will understand why the thought of there being a lot of “investors” in this space sounds very far fetched to me.

I also think it is ABSOLUTELY critical to understand if you own something that might actually be an investment, which includes a good business model/plan, or if you are holding one of many trading sardines out there.

One ought not to HODL a trading sardine.

2 thoughts on “Time is Valuable”