I seldom comment on stocks I don’t know much about. As anyone who has asked me for my opinion on stock X or Y, my most common response is: “Sorry but I don’t know enough about company X or Y to be able to give you any meaningful insights”.

The stocks I do talk about and have opinions on are the stocks I have often researched for at least a full week (but there are exceptions). This goes for even a simple single asset company and I often require much more time to get a grip on the value proposition of a multi asset company. The more moving parts, the harder it is to get a sense of fair value, as evidenced by the fact that especially companies with multiple exploration and/or development assets are often trading at a discount relative to the “sum of its parts”. This is why spin outs are often very successful since it crystallizes value. A two asset company will often see it’s flagship asset as the main value driver while the second asset is usually trading at a big discount to fair value for example.

Anyway, the point I am trying to make is that there are few companies I know well and I dare say know them better than the average market participant. The many that I do not know well or know anything about are companies I pretty much never comment on either.

On that note, I think there is a common trait found in some of the people I consider to be some of the best mining investors out there. Namely that they are very humble and cautious with passing judgement. Some obvious examples would be FundamentalAnalysis, Luc ten Have, EconomicAlpha, mineralised, MiningBookGuy and FiFighter. I almost never see those guys throw out absolutes like “It’s overvalued/undervalued!” or something like that. Seldom do I see them making rash comments about anything really. They do however share insights and information followed by their personal conclusions. Basically, they lay things out that they think are important and then explain what they think it all means… And whatever thought out judgement becomes pretty much self evident as a result. Furthermore, you never see these guys bashing a stock in order to try and get in cheaper or manically pump stocks with the intention to dump their stock.

In essence I would call these high integrity people who are extremely aware of their strengths, weaknesses, limitations and overall investing pitfalls. None of these guys are geologists or mining engineers etc, but still they seem to be really good mining investors…

I am not a geologist either and nor am I a mining engineer. Thankfully for me as an investor I consider these factors to be overrated relative to simply sound investing theory/strategy which includes things such as risk management, expected value and portfolio sizing etc etc. If every geologist was a great mining investor, there would be very few but very passionate geologists. Same goes for mining engineers and any other occupation that is involved in mining. On the flip side, not every good mining investor is a a good geologist or mining engineer etc.

The majority of the greatest investors throughout history didn’t have spectacular returns because they had competence in one business field and only invested in that exact field. Warren Buffet and Charlie Munger were not experts on how to make soft drinks (Coca Cola) or how to make candy (Sears). They were simply great at the art of investing.

What prompted me to write this article is the fact if there is one mining stock that pretty much everyone seems to have an opinion on it’s Novo. Ironically I consider it to be the most complex investment case in the whole mining sector, or at least in the junior mining sector.

Because Novo does not only have multiple projects, but it also have multiple unconventionally large systems. Furthermore, these systems are pretty much unlike anything any investor has encountered in modern times. If that wasn’t enough, the case also involves state of the art ore sorting tech that is evolving with every passing month it seems.

None of these systems have been mined in modern times, at least in a commercial manner. Few even knew about their existence until quite recently. Then add the fact that the gold is much more nuggety than any large scale mining operation in the world more or less.

If you combine all that, there is not a single person living that could possibly be an expert on every subject mentioned above. Are there alluvial mining experts? Sure. Are there alluvial mining experts that also have experience with state of the art sorting tech? I doubt it. What I am basically saying is that if there was one junior mining stock that I would consider to be the hands down most difficult stock to put a fair value on it would be Novo and there is no human being on the planet that can possibly have an expert level opinion on every aspect of Novo, let alone while also being a great investor to boot.

Yet, as I stated earlier, it literally is THE junior mining stock that almost everyone has an opinion on. The most common thing I hear is that “it’s overvalued”. No real explanation. It’s simply overvalued just because! Often it is related to some challenge at one project which for some reason leads to a conclusion that because there is a hurdle at project X it is automatically overvalued. Investing is of course not this simple. One needs to look at everything and not cherry pick something out of everything. A security’s price should reflect the total time discounted Expected Value of  all assets. Yet it is obvious that many people have no idea what the difference is between say Comet Well and Beaton’s Creek, or Egina and Purdy’s reward. Furthermore, many seem oblivious to the fact that Novo has perhaps the most impressive team of backers found in any junior mining company. You can’t make an informed investment case based on one tree…

If you don’t understand why a US$37 B enterprise in the form of Sumitomo Corporation is earning into a 40% stake in ONE of Novo’s many projects then might it not be time to step back and realize that you might now know as much as you think you know? Logically it obviously should give some pause, but Sumitomo’s involvement is pretty much always brushed away and ore sorting is deemed to be some Voodoo Magic. In other words: Most of what is not understood is brushed away and labeled as “unimportant”.

Given the fact that Novo is the most unconventional junior mining stock in the world due to:

… How on earth can it at the same time be the stock that everyone and their mother feels they have an informed enough opinion to pass judgement?

To me this looks to be the Dunning-Kruger Effect in full display: 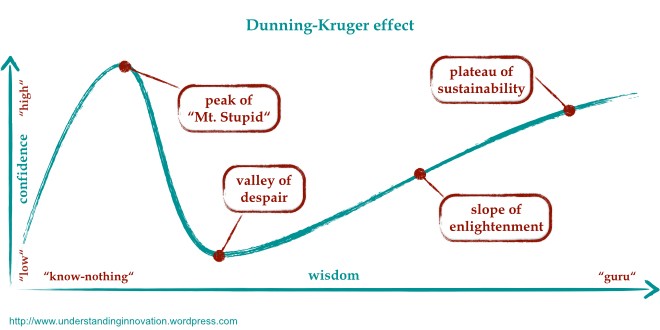 … When you see people dropping one liners like “It’s a scam!”, “It’s a con!” or “It’s overvalued” or “they are greedy pigs that have too high wages!” etc while not being able to answer questions about the case that one would consider pretty basic then that is a tell that said person is at the self delusion/ignorance stage at “Mt. Stupid”. WA has perhaps the highest wager in all of mining? “Who cares!” Novo had up to 40 people employed? “Who cares!”. “I am absolutely certain that they are overpaid because it fits my bias!”.  Meanwhile, most of what I consider to be some of the best junior mining investors are much more disciplined when it comes to passing hard judgement. Humility and competence seems to be correlated? Who would have thought.

Quick to pass judgement = High Confidence = Danger of being at “Mt. Stupid”.

Ps. I am of course guilty of passing uninformed and premature judgement as well.

Ps2. I am aware I know very little about geology or mining which is the reason I invest primarily based on top-down and not bottom-up.

Note: This is not investment advice. I am a shareholder of Novo Resources and they are a banner sponsor.

2 thoughts on “The Dunning–Kruger Effect”