Just had the urge to put together some Expected Value/Return scenarios and discuss R/R and investment strategies, by the numbers…

It is said that 1 out of 3,000 mineralized anamolies becomes a mine.

… Yet a majority of people seem to be mostly focused on catching the next “Voisey’s bay”  or the next “Aurelian Resources”. Aurealian Resources is perhaps still the single biggest runner of any precious metals junior in the last 13 years! The stock went up about 6,250% in eight months: 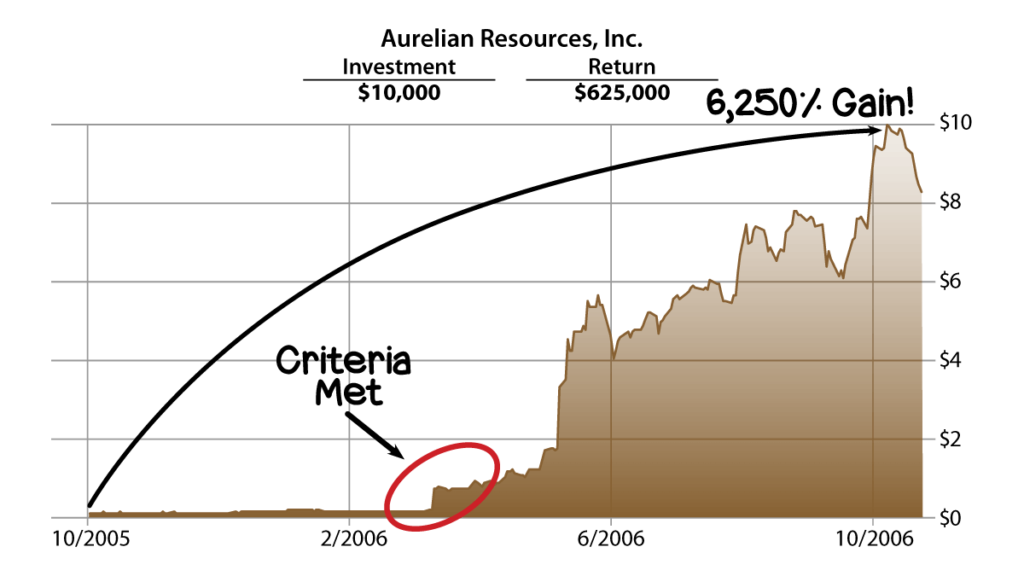 … That’s a return of 62.5 times your original investment, if you by some miracle had bought at almost the exact bottom.  Now, I don’t have an exact number of how many juniors “knock it out of the park”, but given how many micro cap explorers that are listed (or have been) coupled with how few 1000%+ runs one can remember, it would suggest that the multi-multi baggers are very rare.

And just FYI, Aurelian’s Fruta Del Norte discovery was in Ecuador, which is/was not a tier 1 jurisdiction, but the drill intercepts were out of this (modern) world:

Aurelian Resources managed to produce said returns after Kinross agreed to acquire the company for approximately $8.20 (at a 63% premium). Keith Barron who was the founder of Aurelian had this to say in hind sight:

… Barron basically says that without Kinross acquiring the project as early as they did, Aurelian was risking heavy dilution due to the projected drilling costs that would be required to get an “acceptable” reserve number.  I mention this because even IF a tiny junior would “stumble” upon a real deposit or even a world class deposit, it takes years and many millions of dollars (dilution) to prove that. Basically, a junior with a $10 M market cap that is lucky enough to have discovered what would become a deposit worth say $1B does not just become a 100 bagger overnight. It often will be forced to dilute several times before the company as a whole would, together with the market, would have a clear enough picture to fully reflect the quality of the deposit. Again, this is IF a junior beats the extremely long odds and actually discovered what was to become a monster.

In light of the above I would like to show you an “Expected Value” matrix, which shows the mathematical value of different returns (Stock returns, not MCAP returns!) together with different probabilities of said return materializing:

(Note that it assumes 100% loss if blue sky does not materialize, which might be an exaggeration depending on a lot of factors)

What I wish to point out is that for example a bet with the extreme blue sky scenario of 5,000% return has an expected value (long term avg return) of 104% if the probability of success is 4%. Now I would dare to say that the odds are much worse than that for starters. Second of all, a blue sky scenario of for example 1,000% with a probability of 20% (5 times more likely to materialize) shows an Expected Value (return) figure of 120%. Even “only” a 400% return scenario shows better Expected value with a 40% probability than the 5,000% scenario at 4% probability.

Lets think about this from another perspective. Say you are in early, in a given junior that is targeting a gold system that is theoretically worth a sum that translates to a mind blowing 1,500% return for the STOCK. If the theoretical “true” probability is 15%, then that bet has an Expected Value/Return of 140%. Now lets say that the company hit on the first drill campaign and the “true” success probability goes up to 40%, thus the play is de-risked. Then one would “only” need an expected 500% return to have the exact equal Expected Value/return on that bet as the more “crazy” risk taker with his 15% shot…

What’s more is that in a financial world where compounding is the ACTUAL name of the game, the losing scenarios are much more costly than taken at face value. There is a reason why Warren Buffet has “never lose money” as his first AND second rule in investing… You simply can’t compound a loss.

… Both have the same Expected Returns if both were able to make said bets for ad infinitum.

First of all, no one can bet the same amount forever, since sooner or later the money runs out. But lets look at the probabilities of the two investors with different risk profiles in terms of chance to lose it all:

Chances of investor 1 becoming dead broke with NO money to compound in the future through placing new “bets”:  52%

Chances of investor 2 becoming dead broke with NO money to compound in the future through placing new “bets”:  13%

… Both strategies have the same Expected Return, but in a finite world (your finite capital) coupled with the power of compounding, the strategy employed by Investor 2 is superior… Again, even though they both have the same mathematical Expected Return. Diversification is thus much more important the more (subjectively) risky/volatile ones strategy is. Finally, don’t forget that when taking the above realities into accounts, wealth preservation (avoiding losses) is more important than betting on the highest absolute theoretical returns and REALLY consider the downside scenarios. At the moment I prefer cashed up companies with serious backers, and which preferably have some form of asset that might act as a “value floor”!

As many of you know I am heavily invested in Novo Resources and Pacton Gold. I consider both to most importantly have limited downside (cash and flush backers), but also a healthy blue sky profile if things come together. I have also taken a stab at Golden Ridge Resources which I think is an interesting case given the success on their first drill hole (de-risked) coupled with multiple targets (diversification), good management (greater chance of success) and a pretty low market cap (upside potential). Golden Ridge is a fairly small bet thou!

I am currently very interested in an additional case (well it’s actually not new but a lot of things have happened) which in my eyes have a (compounded) risk/reward profile something like this (Note: Crude calc): 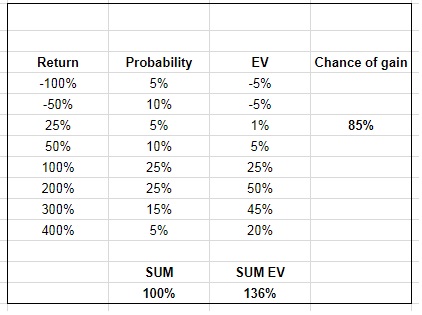 …I might do a “stock report” on this one in the not too distant future (no promises).

Important: Do NOT consider this article to be investment advice of any kind. I own stock in all three companies mentioned and family/friends own stock in Novo and Pacton Gold, which makes me biased.