What do to in a Gold Bull?

With gold rocketing to new highs and potentially starting the next (stronger) leg up I thought it would be appropriate to discuss some investing ideas in light of that potential scenario. For the sake of argument I will assume that this break out in gold is the real deal…

I guess the obvious question is: What should you buy/hold?

Well, the first thing that usually seem to happen bearish sentiment turns into bullish sentiment is that banked success gets revalued first. What I mean by that is the fact that ounces in the ground and projects with economic studies in black and white seem to “re-value” first. I view this as the return of rationality. I mean a solid project trading for half its NPV during a time of depressed sentiment is not rational. It’s akin to the market leaving money on the table, or a “free lunch” if you will. When sentiment turns, and the mindset goes from “mining stocks/projects are worthless no matter what the facts say!” to “My bad, of course they are valuable!, then the mining companies with tangible “facts” will re-rate the fastest. They simply have the smallest “courage threshold”. You don’t have to be a raging gambler to muster up the strength to buy something that is worth perhaps twice as much on paper.

At the same time, the producers will start to move, especially the known ones. Why? Well, they are even more tangible and everyone knows that if a company’s product goes up in value the company will make more money, all else equal. Furthermore the best known names will be the easiest ones to buy and the easiest ones to find.

Imagine you have no clue about mining or mining stocks and you read a headline that says “Gold is rocketing to multi-year highs and gold mining companies are screaming higher”. What are the odds that you, in a greedy rush, will take the time and have the courage to buy some obscure junior with no revenue or even an economic study done? Slim to none I would say.

yesterday (June 20) was a perfect example. Well established producers such as Hecla Mining, Coeur Mining rose between 5%-11%, in one day. We are talking tens of millions to hundreds of millions added in market cap (value of the businesses) across the board more or less. The most leveraged and poorly managed producers are usually the ones who have the wildest reaction to a turn in sentiment. Is it rational? Well, most of them have been losing money for years, and investors/speculator bet that the odds of said companies starting to create any value have gone up due to the increase in product value. With that said the internal fundamentals of the companies itself didn’t change over a day. Basically what I am trying to say is that in my view, the rise of in such shares has nothing to do with any value creation skills that can be attributed to the companies themselves…

So, is it wise to buy the leveraged producers who have simply been bailed out, for a while at least, by external factors?

Well it can work out great during a strong uptrend, but the important thing to keep in mind is that you are indulging in “greater fool” investing, or rather speculation. This is because you are often purely riding a change in sentiment and the cyclicality of the gold price. There is no underlying value driver to really save you and the only way to make it out in good shape is to later sell the shares to someone who is willing to get even less upside. Personally I hate to go sailing without a life-jacket or a strong wind in my back.

In the worst case scenario, which is probably rather typical, there haven’t been much internal (company specific) value added until the uptrend turns into downtrend. If price and sentiment goes down to the levels where you bought a stock, your are stuck with the same company but now with a shorter life span (assets in the ground have depreciated), all else equal. 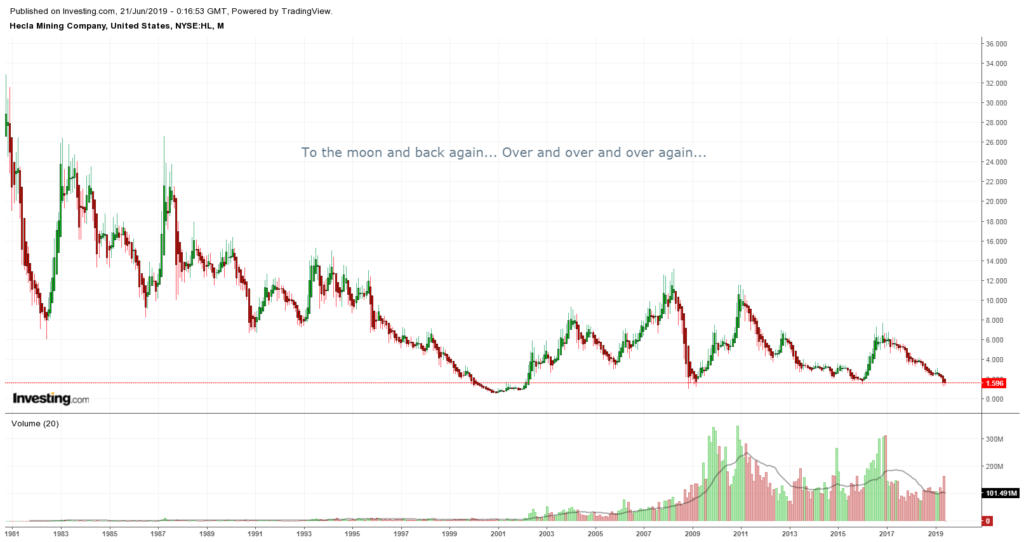 … Can you spot the downtrend? If you catch an uptrend, great! The only problem is that if you don’t exit in time you would have ended riding it to lower levels than where the legs up began. That is the very essence of what I mean by “grater fool” investing (speculation). The company was pretty much never able to create interval value over a decent stretch of time, but rather destroyed value while they also ate their own future (depleted mines). If they would have been good value creators, the long term trend would have at least been up and even if you just stayed put your shares would be worth more in X amount of years.

With that said there is obviously money to be made if you are able to catch one of those runs in Hecla just as long as you sell in time. But I prefer to own stuff that should be going up in underlying value and not just go up in price because a higher gold price is bailing them out.

Is it wiser to buy developers?

In my opinion yes, granted that the company is a quality company, has competent management and is preferably well cashed up. This is because a) It was probably undervalued to begin with (unlike most money losing producers who might actually have been overvalued to being with no matter the low share price) and b) The management team will hopefully be creating internal value for every passing day. What I also would like to see in a developer or developer/explorer is a lot of room to grow. This is important because the stronger the bull, the more greed will set in. We have all heard the stories of all the disastrous M&A activities that took place near the gold price peak in 2011-2012. Acquirers needed to grow for different reasons and many of them paid prices which implied that the gold bull would go on forever. They were simply willing to pay any price since sentiment was extremely good and they were experiencing a period of solid cash flow…

In essence, if you invest in companies who need to grow based on a poor project pipeline or because the management is simply obsessed about growth for whatever reason, you risk owning a company which will destroy value through greedy acquisitions. I much rather be on the opposite side in that situation. Meaning I would much rather be in a developer/explorer who will be benefiting when the greedy human nature rears its head again.

With the above said, it becomes pretty clear why I favor such (quality) companies over “greater fool” investing (speculation) in leveraged producers.

When the least risky ounces and projects (developers) and the directly affected companies (producers) have been re-valued, eyes will turn towards the most speculative/theoretical ounces, the exploration companies…

Given that the sector is hated and have been shunned for a long time I don’t expect the public to find their way to many exploration juniors except for the few who have been able to do very successful marketing. Instead I think the big initial push will come from investors who are already in the space and are looking to re-invest profits received  after the two previously mentioned company types have gone from possibly undervalued to at least fairly valued.

In the next stage, when the bull market in miners is more or less unquestionable, I expect a) a further ramp up in re-investments towards the more theoretical ounces as well as b) participation by the most speculative investor types who have been busy with “playing” in the cannabis and crypto sectors. Given the risk profile of said investors, I can see them going straight for the most speculative and hyped up plays. Meaning, I don’t think they will be mostly interested in catalyst heavy mining companies (exploration juniors) where they see mentions of “ten bagger potential” if you know what I mean.

As is usually the case, the directly affected companies will lead the way out of a depressed sector that has turned around (producers). Next in line are the less tangible and a bit more theoretical companies that are very much affected on paper (developers). Lastly, the theoretical ounces (explorers) will be revalued when the valuation difference between known (producers) and semi-known ounces (developers) is large enough that the perceived relative risk has gone down to an acceptable level, with the help of re-investment of profits from the two latter types of companies.

Well, the obvious answer assuming the recently mentioned hypothesis is true, is to be overweight producers at first. Gradual profit taking should then be re-invested into cheap developers (if possible) before in turn gradually re-invest those profits into some explorers when the valuation gap has gotten too large.

With that said I am personally a bit too obsessed about actual value to try and play this hypothetical food-chain strategy. I simply want to be as heavy as I can in the companies I think have the widest gap between price (value of the company) and my personal view of Expected Return (risk- and time adjusted NPV).

I also very much want a company to have a lot of internal growth potential, say for the coming 5 years at least. I am not keen on owning good chunk of a company where I think there is a risk that they might need to go out and buy a new project, in the foreseeable future, when said projects might cost hundreds of percent more than they do today. Remember, we want to be the acquired not the acquirers when sector sentiment runs hot.

Thus I am more hesitant to invest in exploration companies with projects that are extremely early stage and/or have a limited pipeline. This is because I do not want to take a big risk in terms of a company ending up having no gold in a raging gold bull. If an exploration company is unsuccessful in generating any credible exploration results and it hasn’t got a solid project pipeline it gets even worse. This is simply due to the fact that if a company’s (only) project is deemed a failure and it is forced to acquire a new project, to stay relevant, then we are talking dilution by a skeleton in a market where the price of all projects have already gone up. Meaning, they will raise at rock bottom (company fundamentals wise) and pay much more to be able to keep going to boot.

My Main Considerations at This Time

I personally prefer quality developers/explorers with either a) very large exploration blue sky on their current flagship project and/or b) a solid project pipeline.

All of the above either have ounces banked already, economic studies done and/or excellent project pipelines (or exploration upside on their flagship property).  These are some of the companies that I think are some of the better investments, especially if you don’t like trading and/or don’t want to watch your portfolio everyday.

There are more companies out there but those were just some of the examples that sprung to mind and are relatively well known. I will write about more companies down the line.

(Note: This is not investment advice and I am not a geologist. Always do your own due diligence. I personally own shares of Irving Resources, Lion One Metals and Novo Resources which I have bought in the open market and I am probably biased. My family owns shares in several of the companies mentioned in this article. Novo and Lion One is set to become a sponsor in the not too distant future. )