Eskay Mining (ESK.V): Something Else

Before diving in I will point out that Eskay Mining has become my largest holding since I have yet to sell a share and that the company is a passive banner sponsor. Therefore assume I am biased and do your own due diligence. Anyway, what follows are my personal thoughts on the case as I see currently see it and why I think the market is not fully aware of the sheer potential…

The original Eskay Creek deposit had a strike length of “only” around 1 km, but was obscenely high-grade, and could possibly be worth around C$4B if found today according to John Kaiser.

Skeena Resources which has been working on drilling out the “remnants” of the Eskay Creek deposit has managed to prove up a deposit that is worth around C$1.6 B atUS$1,700/oz gold and US$24/oz silver according to the PFS which was released this year. The footprint of this deposit is around 1-1.5km I think.

VMS deposits form in clusters, and characteristics such as grade tend to be relatively similar, meaning that some “VMS camps” tend to be higher quality overall than others. It makes perfect sense from the perspective of similar fluids, from similar sources, would have had similar metal content whilst forming multiple “VMS pods” in a region.

And just to recap, VMS deposits were simply formed by “black smoker” vents, which spat out metals on the sea floor long ago: 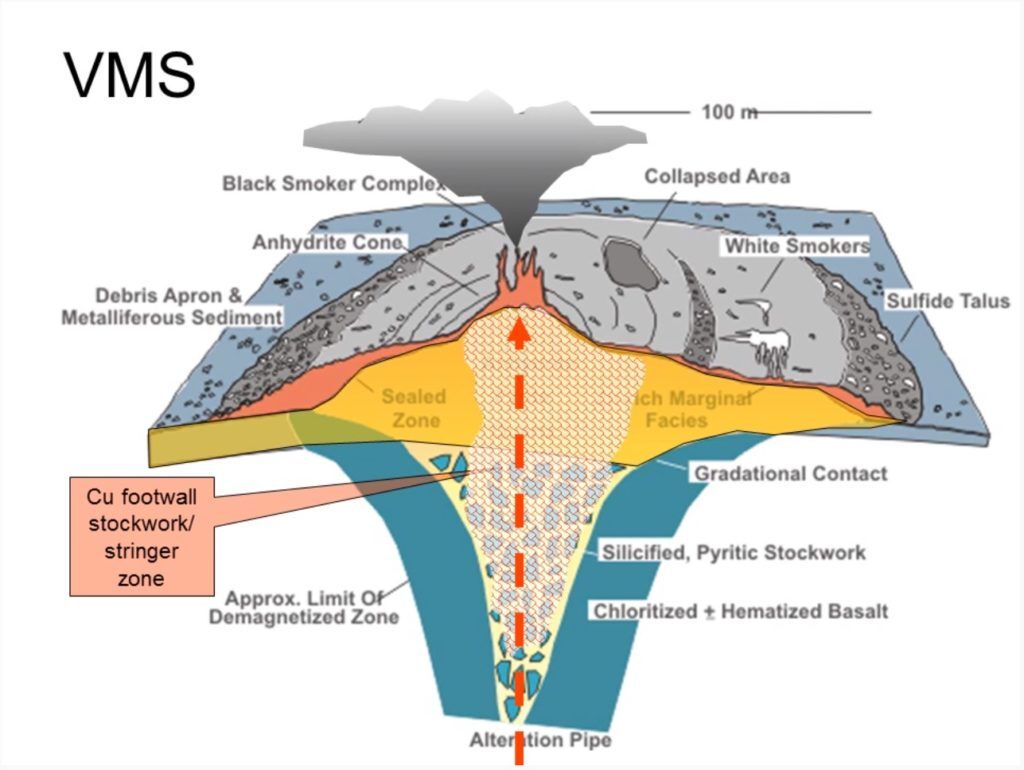 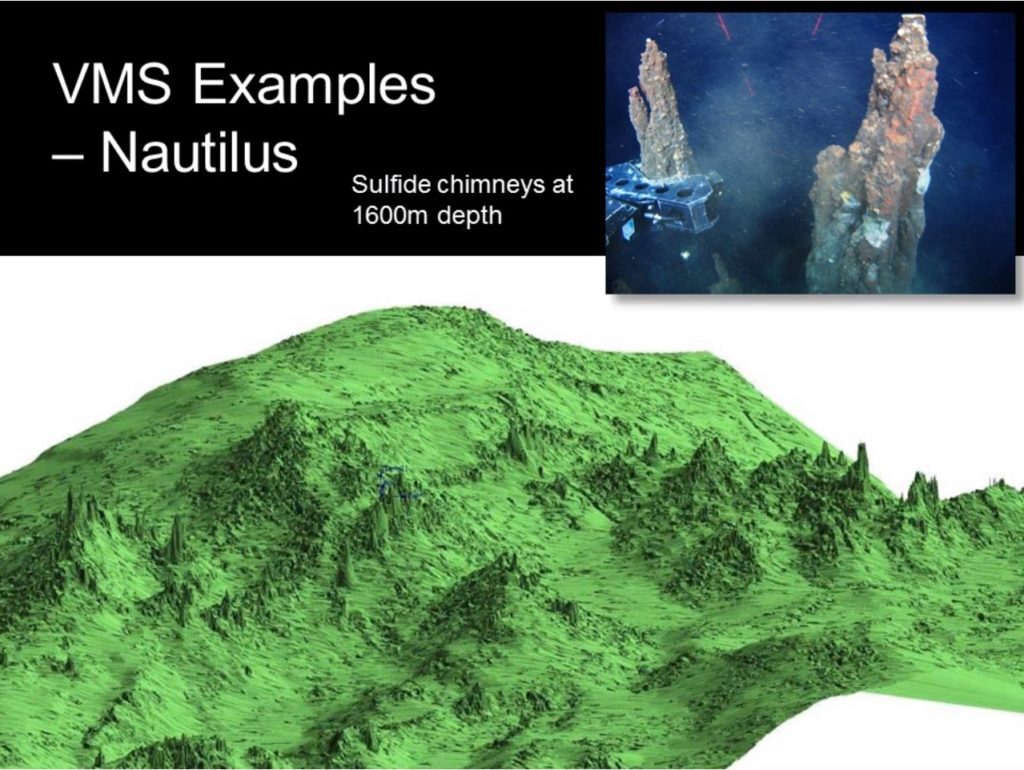 Some Eskay Mining highlights from this field season:

Then we have SIB-LULU, Spearhead and as far as I know Tet, GFJ and Red Lightning are live as well (but are not marked in the slide below): 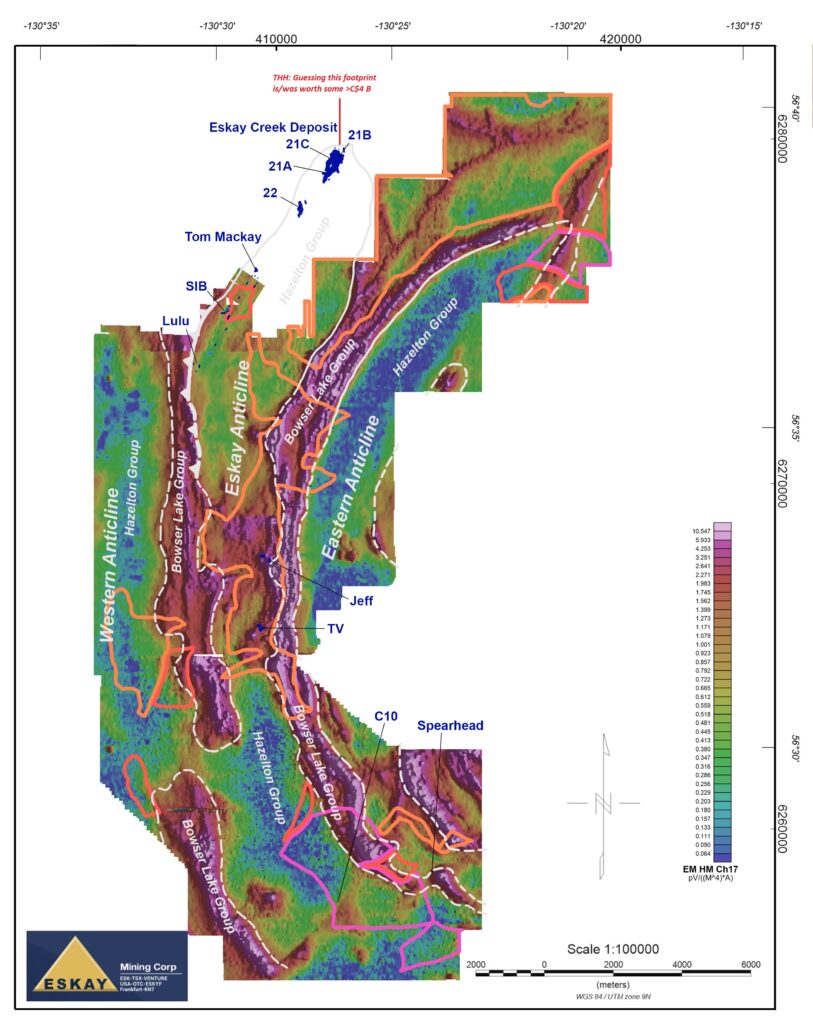 … So I’m not even going to attempt to put numbers on the absolute blue sky potential across all those VMS targets in this district scale land package but I think you get the hit. Oh and it’s worth noting that there might very well be even more targets in light of the SkyTEM data (And this is just a close up of a small portion of Eskay’s overall land package): 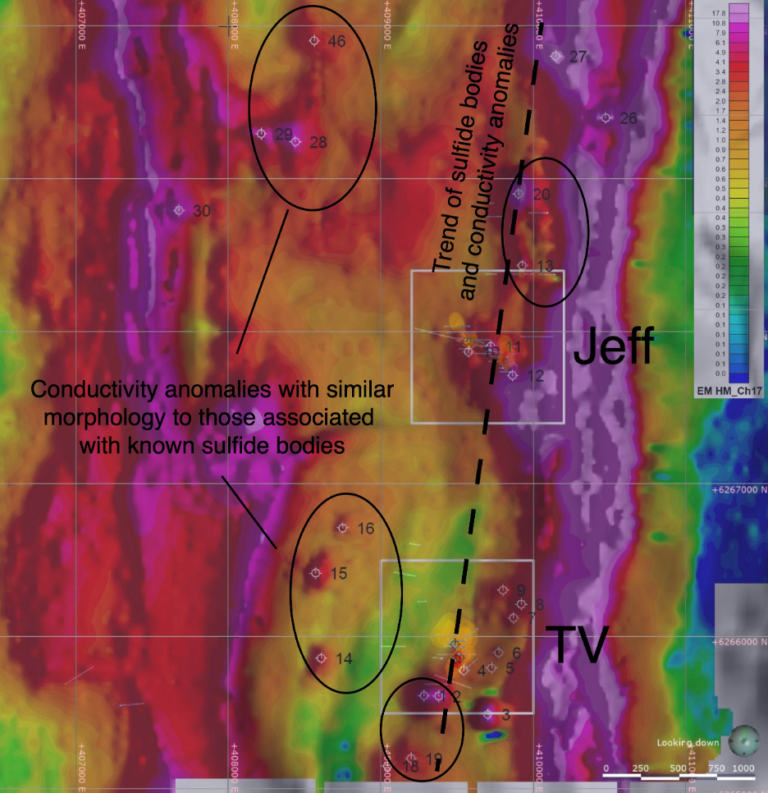 Notice the scale bar and ponder the potential given that the original Eskay Creek and the Eskay Creek “remnant deposit” could be worth $1-$4 B and had/have a footprint of 1-1.5 km. I have been pondering and I really get excited about the potential in the slide above even though it “just” shows the area around TV-Jeff…

It is also worth noting that the Maiden Drill Campaign conducted last year at TV and Jeff intercepted different type of mineralization styles and none of the hits are believed to come from the stratigraphic horizon that the original Eskay Creek deposit was located in:

Now I’m not going to guess what kind of highlights this drill campaign will produce but lets just say I am quite open to the idea that the success last year was not just a lucky break but the start of a trend. And what is perhaps even more impressive is the fact that so far the majority of holes have hit mineralization in parts of the systems that are not thought to even be the “main prize”: 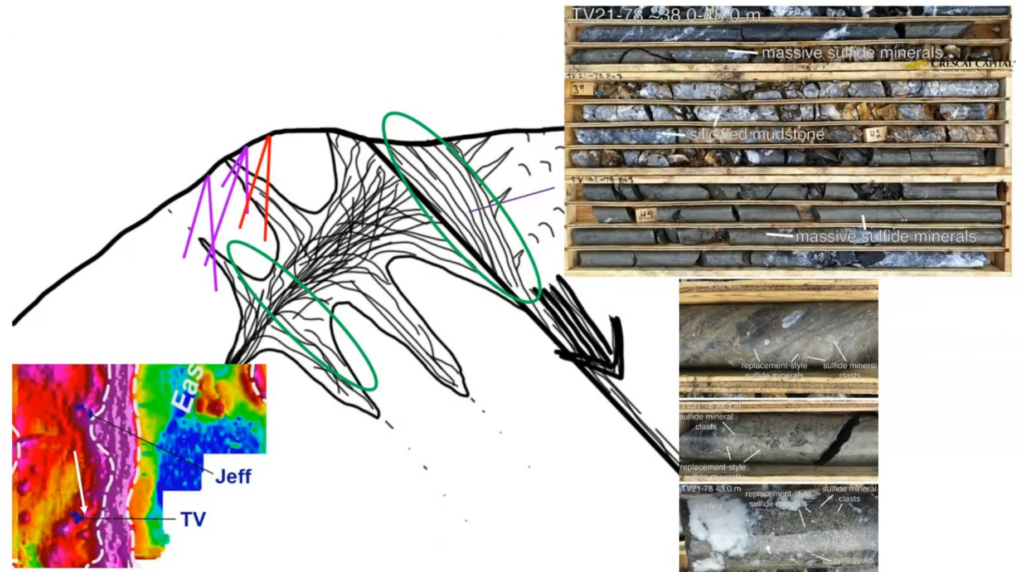 Watch this clip below from the most recent Crescat presentation dated Oct 15 where Quinton Hennigh talks about what the Eskay team has found out this field season:

Eskay Mining is a unique story due to several factors in my opinion;

Eskay Mining has some of the highest absolute blue sky potential of any junior explorer that I am aware and I can see the company being in a growth phase for several years. The odds of Eskay Mining finding at least one VMS deposit that could sustain the current Market Cap looks relatively good to me given the results so far and the number of targets. This creates a speculative but acceptable “margin of safety” via probabilities in my book. Furthermore there is a very realistic chance that Eskay Mining might find two, three or more VMS deposits given the amount of targets that have been generated (and some we already know are precious metal bearing VMS systems). All in all Eskay Mining is believed to control close to 85% of the entire Eskay Creek VMS district as it covers most of the three anticlines: 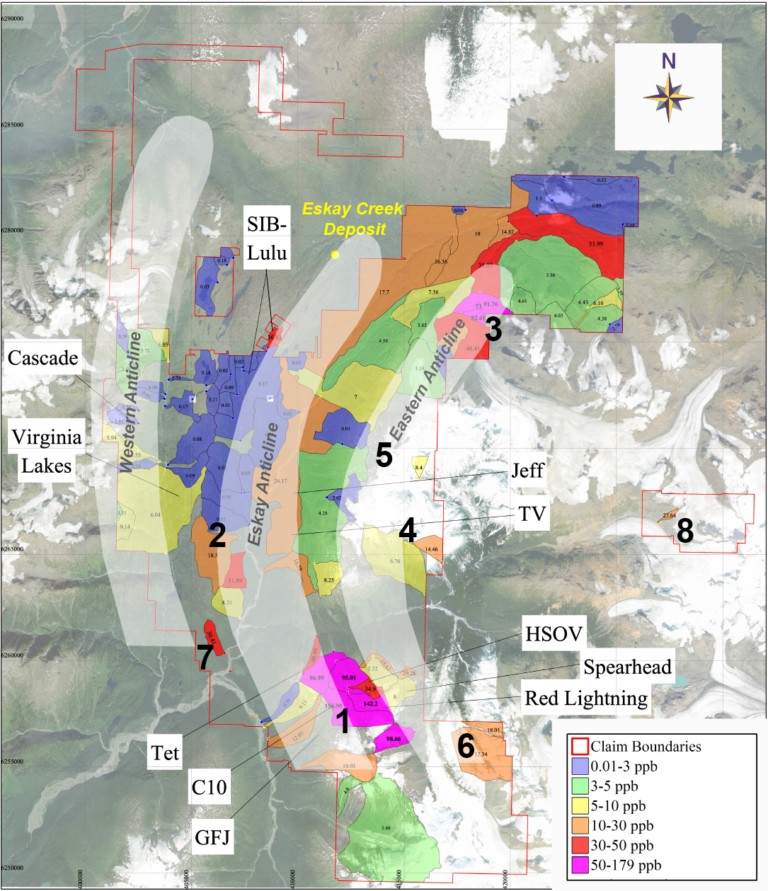 In short I think:

It looks like they got the tail(s) of something that could be enormously big and high-grade.

… I like cases where I don’t need to be precise. The case should be readily explainable and the Risk/Reward opportunity should be obvious. If I think there is a relatively good shot of the company proving up a deposit which sustains the current Market Cap, and there is a lot more of potential beyond it, then that is a pretty simple/obvious Risk/Reward opportunity in my book.

Lastly I would say that Eskay Mining is probably considered overvalued by many. At surface I can understand that given the fact that we don’t have even have a resource yet. With that said I fail to see how it could be considered overvalued in light of the in my opinion nosebleed level of potential (and the fact that the maiden drill results from TV and Jeff were stellar). This is why I have a huge position in Eskay and why I am happy to have the company as a banner sponsor. It is also why I am probably biased even though I think my case is quite rational.

To me it looks like Eskay Mining is forming a big, and 10-month long, “Bull Pennant” continuation pattern: 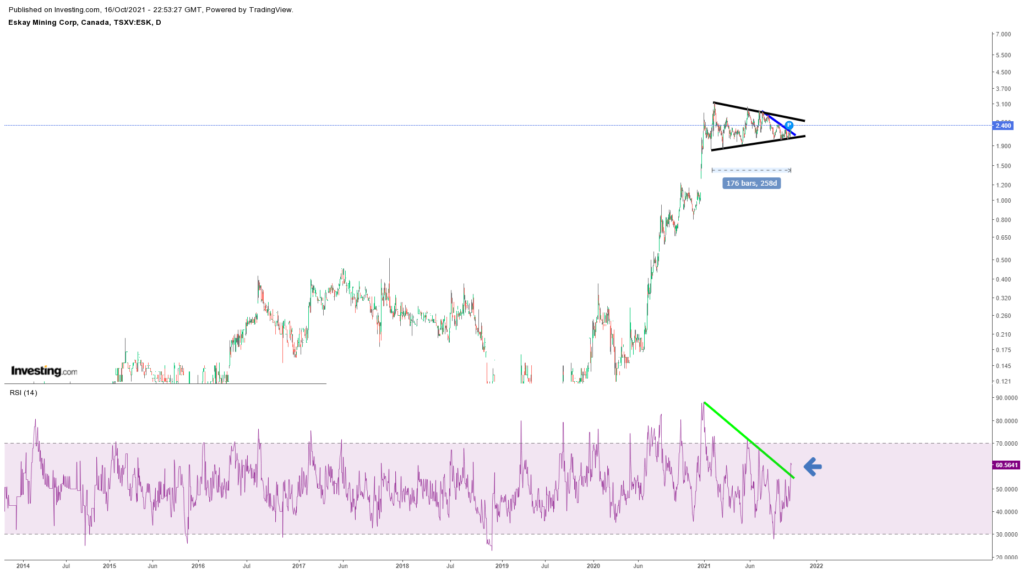 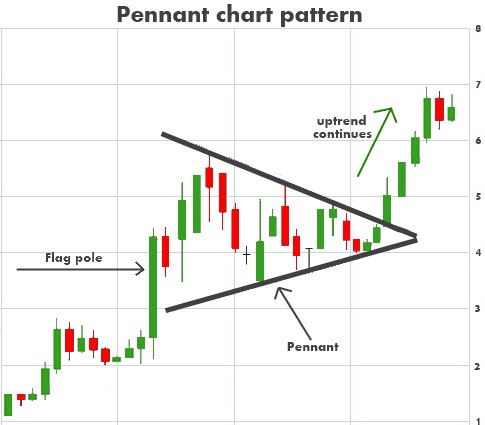 Note: This is not investment advice. I am not a geologist nor am I a mining engineer. This article is speculative and I can not guarantee 100% accuracy. Junior miners can be very volatile and risky. I have bought shares of Eskay Mining in the open market and I was able to participate in a private placement. Assume I may buy or sell shares at any point in time. I was not paid by any entity to write this article but the company is a passive banner sponsor of The Hedgeless Horseman. Therefore you should assume I am biased so always do your own due diligence and make up your own mind as always.

3 thoughts on “Eskay Mining (ESK.V): Something Else”