A quick look at some charts for companies that I own to a large or small degree:

… We can see that it bounced but then proceeded to break the black support line, which of course was a bearish event.

… We are still on an RSI Daily sell signal, and next major support is around $36 which is also at the 0.5 Fib line. The Fib 0.382 line is next up, which could dampen the fall. All in all, I am in no rush to pick up more at this point in time.

Premier gold is another producer/developer that I would like to own more of and buy as cheaply as I possibly can.:

… Premier is on a RSI Daily sell and fell hard after trying to re-take the black trend line ASAP, after having broken support (also note the lower RSI readings as it makes new lows, which does not signal a turning point). There are a lot of support levels below. Some that go back 10 years:

… As one can see in the long term chart above, buying Premier at around these levels have resulted in some good to great medium term results over the last ten years. I think Premier has a lot of growth in the future, and I can see it being one of the best performers in a gold bull, granted they do things right of course.

Novo took a lot of technical damage at the end of last week (the last two big red candles), which I guess was a result of some fallout from the crash in Miramont, since a lot of Miramont shareholders probably own some Novo as well (like myself): 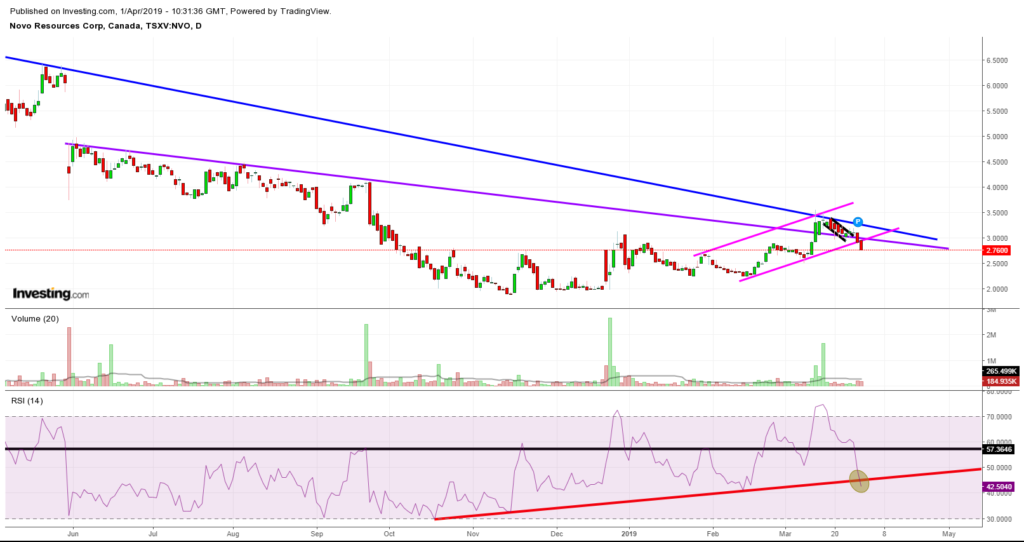 … As you can see, Novo broke down from the pink uptrend channel as well as fell below the purple support line (but not on really heavy volume thankfully). Not only that, but it just barely triggered a daily RSI sell signal. Now, given that we are expecting news early this week, the stock might of course reverse all this in a heart beat. There is also a lot of support levels below the current price.

Irving got the same treatment as Novo for the same reasons I assume (Cross owned, QH-company):

… As you can see in the chart above, Irving fell hard on Thursday and Friday along with Novo and Miramont. It sliced through the pink support line as well as the blue support line, on decent volume. It also producer a RSI Daily sell signal. There should however be quite some support in the current area.

Not much to say. Miramont fell hard on Thursday and Friday on the news that the first 6 out of 9 holes failed to produce a discovery. With around C$3.5-C$4.0 M in the bank, the current Enterprise Value for Miramont is only around C$2.5-$3 M as the share price is trading at its lowest levels ever:

… I continue to hold a decent chunk of Miramont as I am currently unwilling to sell at these levels since doomsday seems to already be priced in. I might actually buy more if it falls even further since they got plenty of cash left coupled with the fact that they have only drilled six (soon to be nine) holes in that big diatreme. If/when their original flagship project “Lukkacha” is back on the table some day, the speculation cycle should restart again given the potential size of the price.

I have a hard time believing that the big down days in Novo and Irving had anything to do with some fundamental change in the companies in question, but was connected to heavy cross ownership between Novo-Irving-Miramont. With that said, Thursday and Friday’s action did create some technical damage as described earlier in the article.

(Note: I own all shares mentioned in this article and might buy and sell at any point in time. This is not investment advice. Mining stocks are very risky and can be very volatile. Always do your own due diligence.)