The drilling in the WWZ followed previously reported higher-grade (>3 g/t Au) intercepts (see Company news releases dated February 14, 2015, January 7, 2021, and October 27, 2021). The WWZ is immediately adjacent to the Lookout Mountain Resource and has the potential to significantly expand the resource at higher gold grades. Fourteen new drill holes, including six core holes, in this program will add many more gold assays and much more geologic information to the WWZ target. Timberline also drilled a core hole to the east of the WWZ to provide the most thorough test yet of the significant IP anomaly in the Graben Zone. The Company also completed nine RC holes at the Oswego Target, approximately 1km east of the WWZ. These holes will test the downdip extension of the high-grade surface sampling reported in December (see Company news release dated December 6, 2021).

Timberline’s President & CEO, Patrick Highsmith, commented, “Despite delays due to lack of drill crew availability, our 2021 drill program at the Eureka Project was executed safely and efficiently. Combined with the five previously released drill holes from the summer, we completed approximately 6,270 meters (20,570 feet) in total. We drilled several core holes to improve our geological understanding and confirm gold grades in the Water Well Zone. We were also able to quickly pivot and move the RC rig to Oswego after our surface sampling returned high-grade results there. We look forward to the results from all this drilling and to strong news flow through the first quarter.”

The RC cuttings and drill core have been logged in the Company’s Eureka, Nevada facility. Approximately 3,300 samples were collected and submitted to ALS Global, in Elko, Nevada for preparation and analysis.

Figure 1. Location of 2021-2022 Drilling at the Eureka Project, the Water Well Zone and Oswego Targets 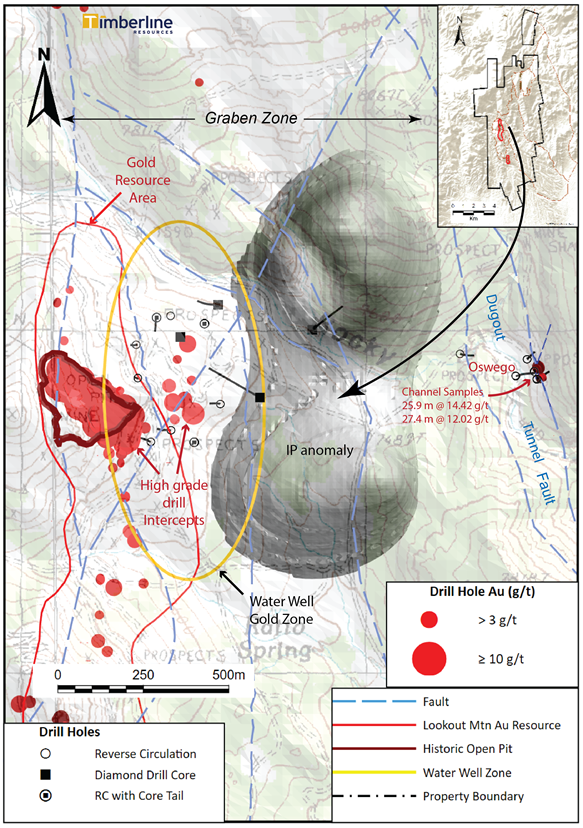 Company staff supervised the collection of all diamond drill core and RC samples. Timberline personnel also transported the core and RC samples to Timberline’s secure Eureka facility. Senior geologists directed the cutting and sampling of the core and selection of representative samples for assay. Quality control was monitored by the insertion of numerous blind certified standard reference materials, field duplicates, and blanks into each sample shipment. Company representatives completed Chain of Custody dispatch paperwork and samples were transported by representatives of ALS USA Inc. (ALS) to their Elko, Nevada facility for sample preparation. Drill samples will be assayed by ALS in Reno, Nevada for gold by fire assay of a 30-gram charge with an AA or ICP-ES finish (ALS code Au-AA23). The overlimits for gold samples assaying above 10 g/t will be determined by a 30-gram fire assay with gravimetric finish. In addition, visibly altered samples were submitted for multi-element analysis (33 elements) by four-acid digestion and ICP-ES determination (code ME-ICP61).

According to Timberline instruction, samples assaying above 0.2 g/t gold will also be tested for cyanide-soluble gold with the 30-gram Au-AA13 method. This form of analysis is a preliminary indication of the favorability of the sample for gold recovery by cyanide leach. Since the test is performed on a small aliquot of a pulverized sample, it is not a reliable indication of metallurgical recovery.

Steven Osterberg, Ph.D., P.G., Timberline’s Vice President Exploration, is a Qualified Person as defined by National Instrument 43-101 and has reviewed and approved the technical contents of this release. Dr. Osterberg is not independent of the Company as he is an officer.

Timberline Resources Corporation is focused on discovery of Carlin-Type gold deposits at its district-scale Eureka Project in Nevada. The Eureka Property includes the historical Lookout Mountain and Windfall mines in a total property position of approximately 27 square miles (70 square kilometers).

The Company is also operator of the Paiute Joint Venture Project with Nevada Gold Mines in the Battle Mountain District. These properties lie on the prolific Battle Mountain-Eureka gold trend. Timberline also controls the Seven Troughs Project in northern Nevada, which is one of the state’s highest-grade former gold producers. Timberline controls over 43 square miles (111 square kilometers) of mineral rights in Nevada. Detailed maps and mineral resources estimates for the Eureka Project and NI 43-101 technical reports for its projects may be viewed at http://timberlineresources.co/.

On behalf of the Board of Directors,

The terms “mineral resource,” “measured mineral resource,” “indicated mineral resource” and “inferred mineral resource,” as used on Timberline’s website and in its news releases are Canadian mining terms that are defined in accordance with National Instrument 43-101 – Standards of Disclosure for Mineral Projects (“NI 43-101”). These Canadian terms are not defined terms under United States Securities and Exchange Commission (“SEC”) Industry Guide 7 and are normally not permitted to be used in reports and registration statements filed with the SEC by U.S. registered companies.

The SEC permits U.S. companies, in their filings with the SEC, to disclose only those mineral deposits that a company can economically and legally extract or produce. Accordingly, note that information describing the Company’s “mineral resources” is not directly comparable to information made public by U.S. companies subject to reporting requirements under U.S. securities laws. U.S. investors are urged to consider closely the disclosure in the Company’s Form 10-K which may be secured from the Company, or online at http://www.sec.gov/edgar.shtml.