Quick comments: Novo has added a third swale at the Paradise prospect measuring 750m and is open: 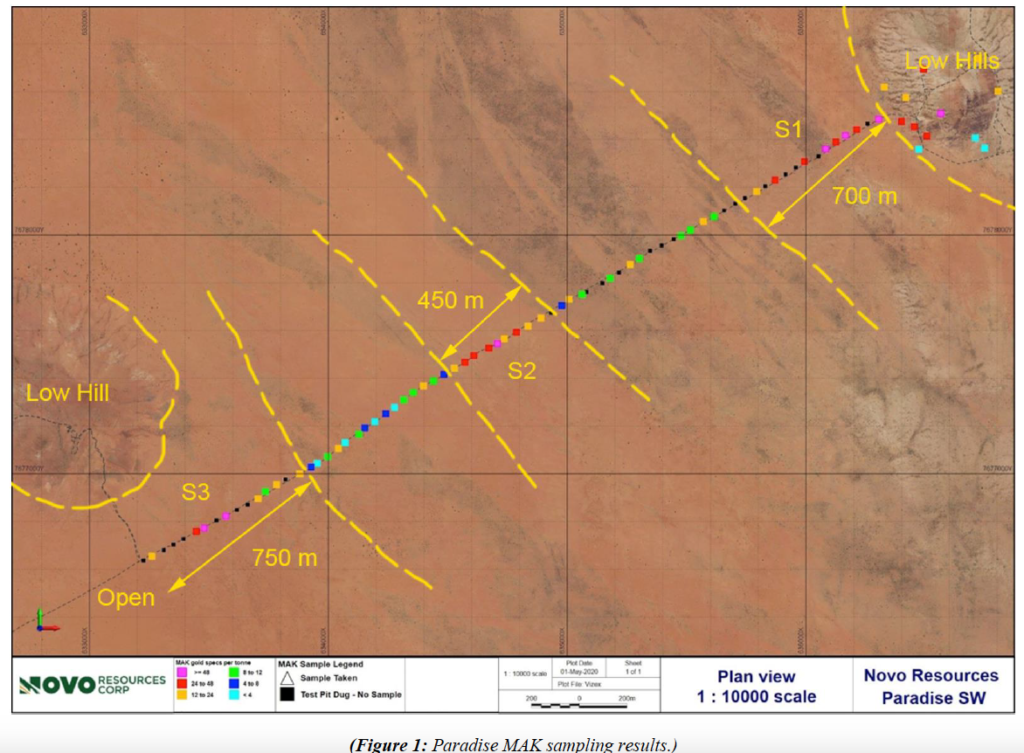 The cumulative swale widths at the Paradise target are now up to 1.9 km, are open, and with lower grade mineralization in between.  Furthermore, the company plans to explore 20 additional high priority targets around Egina during the 2020 field season.

The case for Egina (gravels) is quite simple really…

The Egina type lag gravels is “only” one part of the Novo story but it is a very important part. Since (some) people seem to have such a hard time to wrap their heads around why on earth a $40 B entity in the form of Sumitomo Corporation is currently earning into a minority position in 1/3 of Novo’s total lag gravel claims I thought it might be a good idea to do a “Egina For Dummies” piece. I’ll break down the case as I see it, step by step, in the simplest way I can. Hope you’ll enjoy!

Before we begin I would like to point out that Novo has a Market Cap of CAD$500 M which should reflect any and all projects and equity stakes as well as CAD$30 M in cash.

In other words the Market Cap should reflect the Expected Value of everything below, combined:

What is the gold in the gravel worth today?

Australian gold price is AUD$2,650 at the moment.

Keep in mind that the global average for deposits such as this is around 0.2-0.3 g/m3 and I would argue that I doubt many of them are buried just a few decimetres below the surface (nor do they potentially cover thousands of km2)

What would the gold value per cubic meter (m3) be if the Egina mining lease is a good indicator for the rest of the greater terrace?

What would the margins be if we double Keith Barron’s cost estimate per cubic meter and we also assume the cost estimate was USD (AUD/USD = 0.65)?

… The break point, in terms of grade required for the operation to start showing negative operating income, would be 0.17 g/m3.

… That’s quite remarkable given that it is based on operating costs per cubic meter of US$10 which is twice as high as Keith Barron’s guesstimate.

What might the cumulative operating cash flow be from Xkm2 of either zone on an undiluted basis?

(Numbers have been rounded)

… Is that a prize which would make Sumitomo Corporation with an enterprise value of around US$40 B partner with a junior explorer for the first time ever?

Keep in mind that Novo has [2,000-3,000 km2] of ground staked around the Greater Terrace which the company believes could host gold bearing lag gravels.

Note that I am not making up any of these numbers but am actually using all the [currently known data] and [expert guesstimates], and then simply projecting it to larger areas. However, it does assume 100% recoveries, which will hopefully be close to reality, especially in the swales where the particle size is expected to be larger.

So what would it cost to build one “mine” which churns through lets say 2 km2 per year? Well the ore sorters have a price tag of around US$700,000-US$1,000,000 each and these units could possibly be the only real processing needed at Egina. Then there is the cost of a continuous miner and screeners etc but I don’t know what they would cost exactly. Overall cost for one “mine” or rather a “mining unit” is guesstimated to be “a few million… Maybe a couple of tens of millions” according to Quinton.

When you consider the notion of one “mine” or “mining unit” with such low CAPEX, the potentially obscene Return on Capital should be obvious. One single unit (one “mine”) could potentially pay itself off within a year, or mere months, depending on the grade and cost structure.

Then consider the fact that Novo has around 2,000-3,000 km2 staked around the greater terrace and they believe this gold bearing lag gravel layer might be present almost everywhere. On that note, Quinton recently stated that he believes the overall thesis in terms of there being gold “all over the place” might be proven (or disproven) by the end of the field season already.  Furthermore, when talking about the “targets”, Quinton stated “I would say that it encompasses  most of the say 2,000-3000 km2”. Yet, the bears/bashers/trolls don’t even factor in the greater terrace while Sumitomo Corporation believes there is enough potential to move the needle for them even with a minority stake… Truly mind boggling stuff if you ask me, but then again it’s why I am so bullish and why I do my own due diligence. Food for thought.

All the above is why I think you can immediately write off any opinion on Novo that does not factor in all this information known to date. Said information also happens to be backed up by, again, the fact that the US$40 B entity known as Sumitomo, who has been an insider for around two years, is a) Earning into a minority stake in the “Egina project” which makes up around 1/3 of Novo’s Greater Terrace ground, and b) Decided to put one of their senior managers on Novo’s Board of Directors (what that signals in terms of their view on Novo and Pilbara is up to you to speculate on).

Personal anecdote: After I saw the discussions that followed the Crux and SeekingAlpha report I immediately added 30% to my already large Novo position because I couldn’t believe that none of the reports really put any value on Egina and both were met with applauds from MinTwit and most bashers/bears/trolls. If I’m betting against such due diligence and conclusions, it should be almost impossible for the Risk/Reward to not be excellent, given that I think Egina alone might be worth somewhere between nothing at all to billions of dollars.

So how could such exceptional economics be possible?

Simply because the operation would be so… Simple.

When people think high margins they usually think about high grade. Fosterville is an example that many people will be familiar with for example.

“Grade is king” is a common expression. The thing is that it’s an over-simplification but it is true that higher grade tends to correlate with higher margins on the whole. On that note I discussed this topic with Rob Humphryson during my last site visit and he said “Grade is not king. Margins are”. This is of course true since the only thing that dictates the value of an ounce in the ground is how economical said ounce is to recover from the ground. There are sub 0.5 gpt deposits out there that makes more money than 8 gpt deposits. Why? Because the gold is much easier and less costly to recover from the ore. Simple as that.

With that said, can anyone come up with a simpler mining operation than having a continuous miner (or something akin to that) just chomping away at a 1-1.5 m thick loose gravel horizon buried lets say 20cm deep?

One could literally not come up with a more accessible mining scenario.

Then add the fact that the ore horizon won’t need any drilling, blasting or crushing. How many mining operations are fortunate enough to avoid all those costs?

If that wasn’t enough, Egina could have the cheapest and the most simple form of processing I have ever heard of…

Direct gold sorting. There is no operating gold mine in the world which would make as much use of ore sorting as a nuggety, loose gravel gold deposit. Most mines that use ore sorting technology has it as just one piece of the processing flow sheet. No mine is able to sort the gold directly either. So if ore sorting is worth the investments even when it’s only a “tweak” to a conventional mine, then how profitable could it be if ore sorting was the one and only step in processing?

The implied economic potential of Egina type lag gravels look obscene on surface. Too good to be true if you will. But when you think about it, it actually makes perfect sense, because:

Any mining company would kill for point 1 and 2 because it would imply low costs. Point 3 is something that is usually looked at with disgust. However, Point 3 is needed in this case to make point 4 happen. If the Egina type lag gravels included only super fine and disseminated gold mineralization then it could actually make life much harder because it would be harder to recover all the gold without a good water supply. Point 5 makes it even sillier. Imagine the theoretical cash flow from one “mining unit” that mines lets say 2km2 of swales grading 1.7 gpt per year and compare it to the cost of “a few million… Maybe a couple of tens of millions“. Then consider the time line difference between building a mill/plant compared to setting up a continuous miner with some ore sorters…. There would no mining project in the world with higher IRR. I could even argue that Novo is cheap based on Egina alone if there was even a 30% chance of at least 10km2 of swales being mined and that every other project and equity stakes we have is just gravy on top. If blue sky materializes then I would argue that Egina will be worth billions of dollars (personal and biased opinion!).

The above should make it obvious why I think ore sorting is currently the main value driver for Novo because if the trial results translates to the field… Then oh boy, it should really be like printing money.

Some people laugh at “gravel gold”. It sounds “unsexy” and it sounds crude and basic. It’s nothing like a 5m intercept of 100 gpt, 500m down, in Redlake for example. The irony is, again, that the basic and unsexy nature of the golden gravels around Egina is the very reason for why the economics look sexier than 99.9% of any gold operation I know of. In other words, based on the information known to date, it looks like we might be laughing all the way to the bank if all this translates into a real mining scenario.

I’ll take a view of an ore sorter directly spitting out gold from gravels (turning gravel to gold) over some sexy quartz core with visible gold any day. At the end of the day it’s the underlying BUSINESS VALUE that leads to REAL VALUE, not how complex and fancy the deposit is.

Also keep in mind that it’s understandable that Egina is met with disbelief given that a) The potential scale is unlike anything seen and b) There is no gold mining operation in the world that recovers the gold solely through ore sorting.

Lastly: There are never any guarantees. Only Risk/Reward.

Keith Barron and Quinton Hennigh talking about these lag gravels: 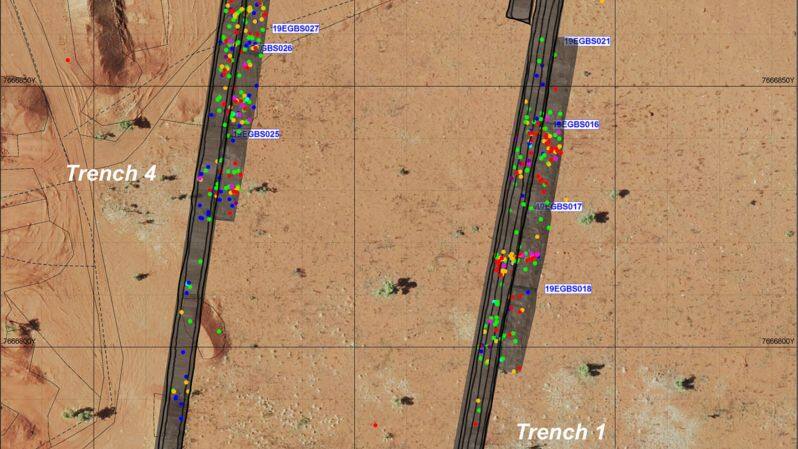 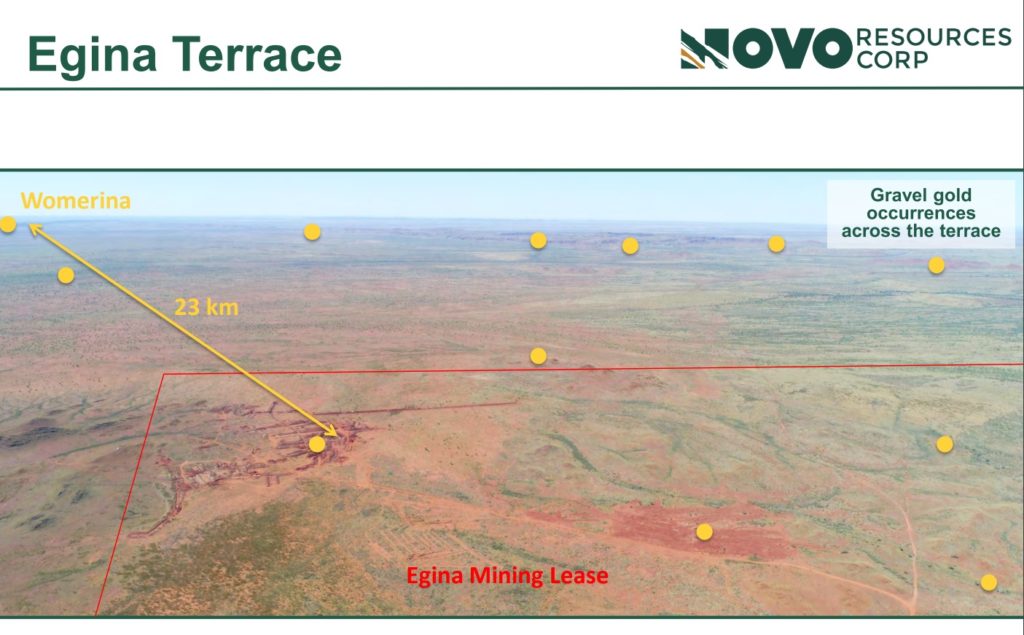 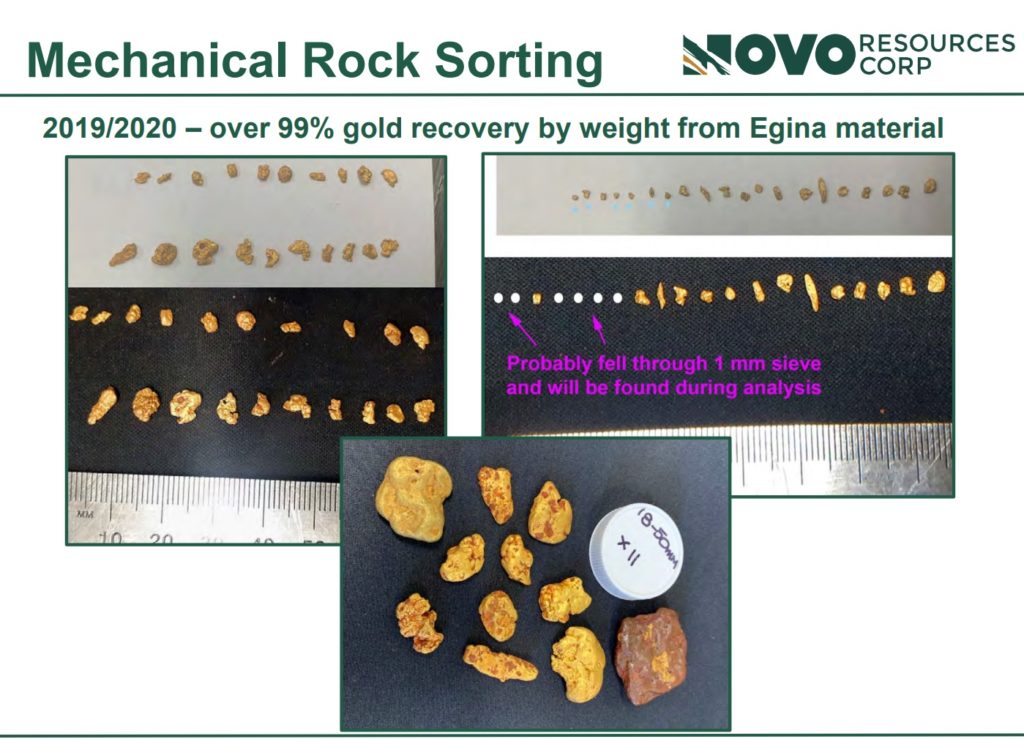 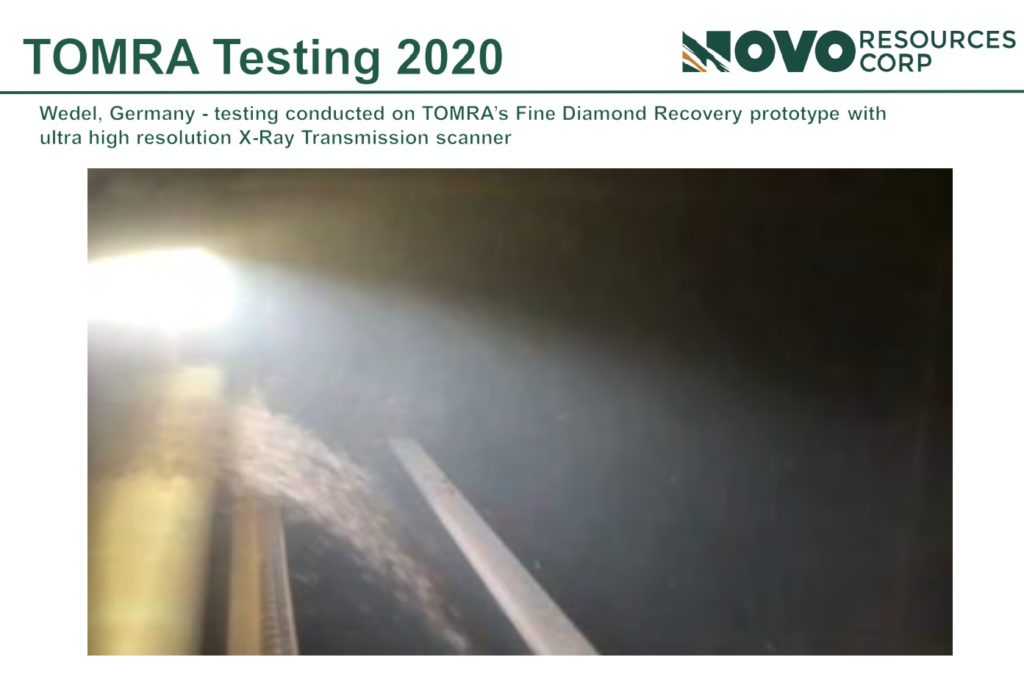 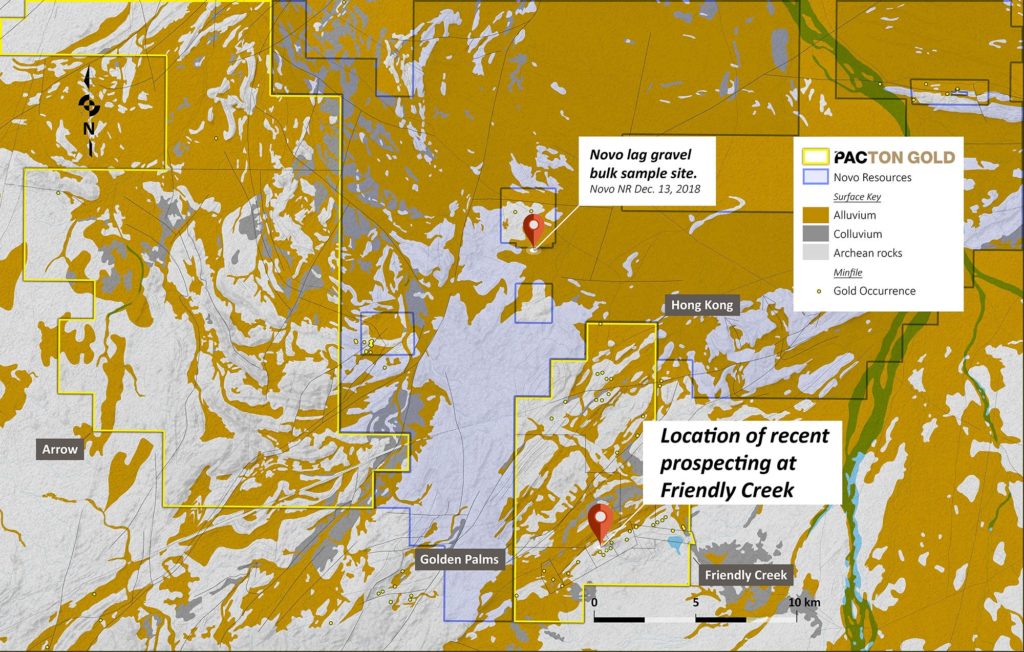 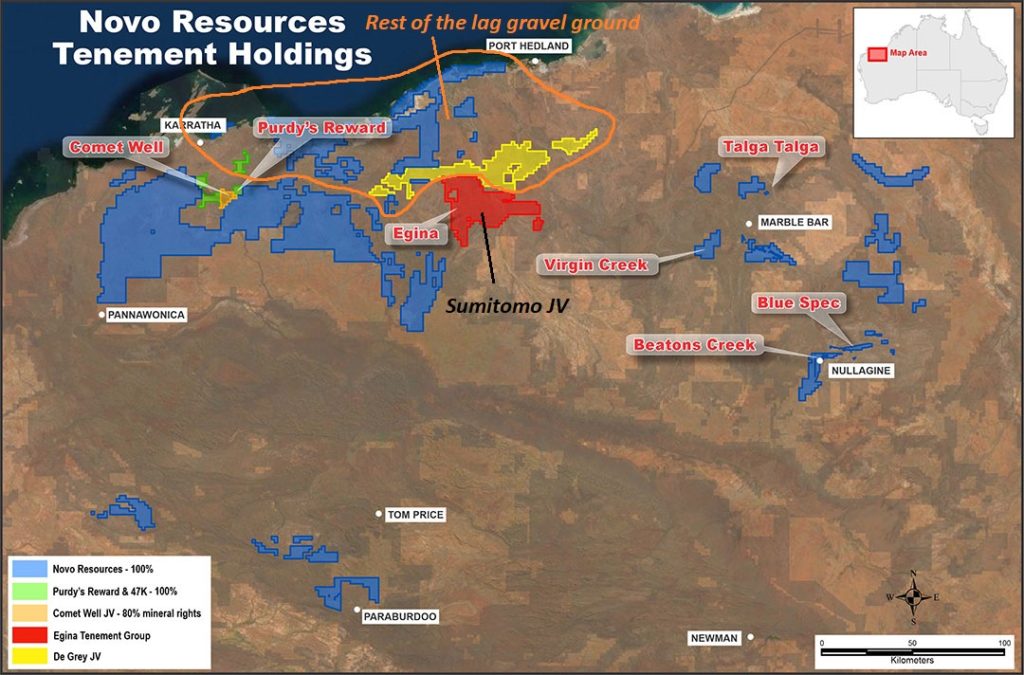 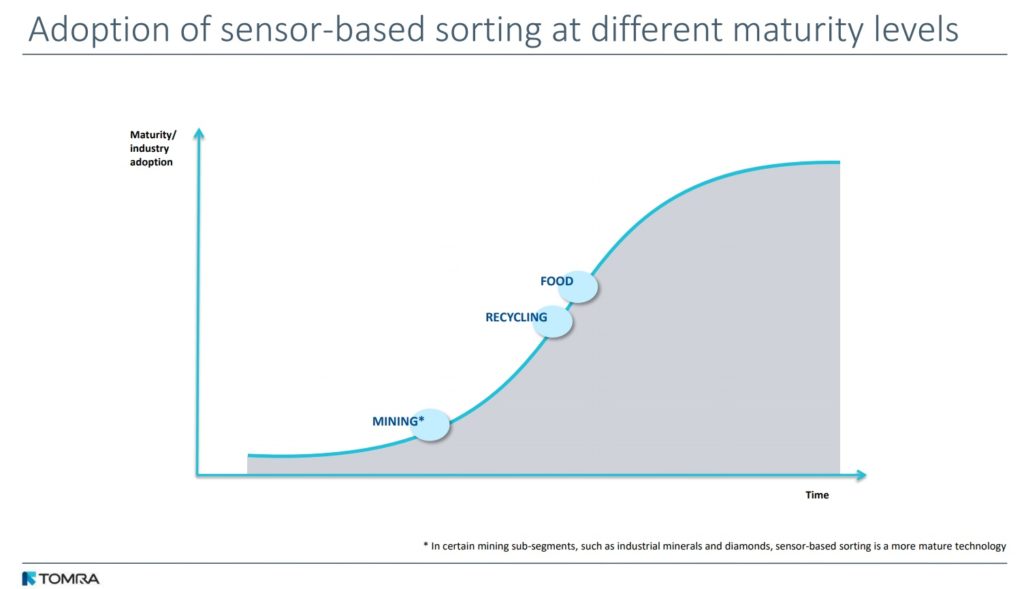 … Same but in the words of Ross Beatty…

Like I wasn’t enough bullish on Novo’s future already I was fortunate enough to have someone who might have the most relevant experience there is make these comments on the article:

… This is the actual deposit type that Quinton uses as an analogue to describe Egina. What a an absolute treat, thank you sir!

Note: This is not investment advice. Always do your own due diligence. This article is highly speculative and it’s just my opinions. I am a shareholder of Novo and the company is a banner sponsor.