Let’s Get Some Things Straight Regarding Novo Resources

I have been reading a lot of comments on different forums that are full of misunderstandings. Some people seem to think that ONLY one layer at the bottom of the Mafic Conglomerates is gold bearing, when in fact Novo has stated NO such thing…

Let’s get some facts straight in chronological order:

This is what the “Bulk Sample” News Release from August 8 said:

“this sample originates from the uppermost horizon of an 11-meter thick sequence of mineralized conglomerate beds.”

“… The weighted average grade of these two subsamples is 67.08 gpt Au.”

FLASH NEWS: The above information has been confirmed to be wrong by Novo.

This is what the News Release from October 17 said:

This is what the News Release from November 2 said:

“Fine gold particles panned from a grab sample near the base of the second conglomerate horizon exposed in trench 2.”

… We have both fluvial AND ocean deposited conglomerates (sediments), which means some layers might be more patchy (fluvial) than others (ocean).

… Remember, this bulk sample was supposedly taken from the “uppermost horizon”!

Picture included in the News Release from November 2 (blue markers added by me): 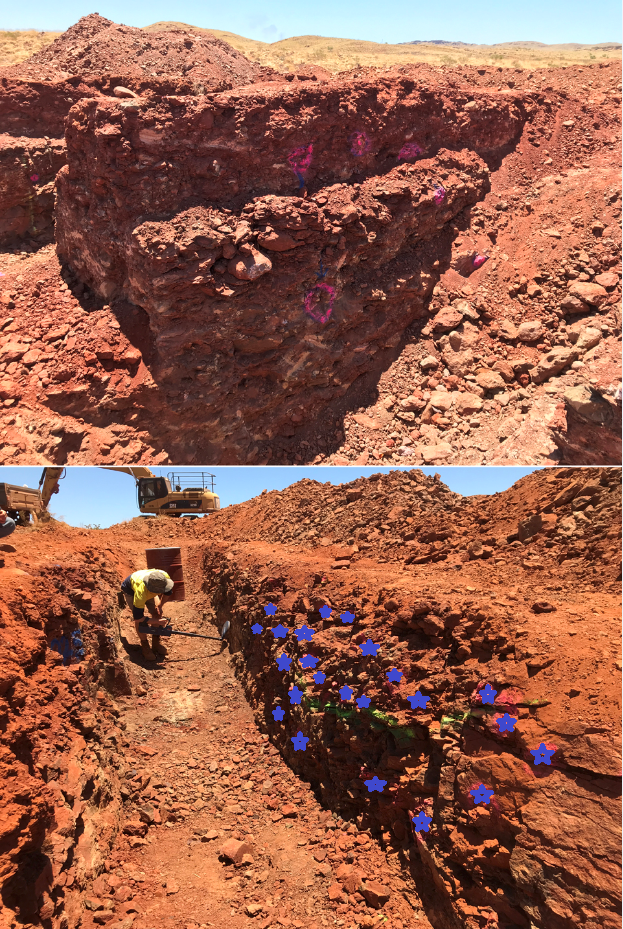 … Does that picture suggest that only ONE layer is gold bearing in that trench? The green line is a conglomerate contact!

This is what the “infamous” News Release from November 24 said:

“Novo personnel have noted metal detector strikes throughout this lower conglomerate sequence, however most occur near its base.”

… Key word here is “MOST”. They did not quantify in any way what that translates to in grade. If the “uppermost horizon” was indeed the correct location from the first bulk sample that graded over 60 gpt, what does that potentially imply in terms of potential grade for what’s at the base of the Mafic Conglomerates…?

Novo has never stated that ONLY the Mafic Conglomerate sequence is gold bearing and CERTAINLY NOT that only the bottom part of the Mafic Conglomerate sequence is gold bearing. I feel sorry for any investor who potentially sold based on false information. We have a tonne of work left to do before we prove up this project, but in the meantime, let’s stick to the ACTUAL FACTS.

Allow me to end with a bit of hyperbole (quote from David Erfle):

“Rick Rule taught me long ago that every takeover of +$1 Billion he’s been involved in has endured at least one 50% correction along the way to being taken out and Novo is in the process of having one right now.”

… Novo did in fact reach a 50% correction yesterday (Monday).

[Disclaimer: This should not be considered a buy or sell rec. I am simply stating the known facts.  I am long Novo Resources and have increased my stake quite a bit during the last three trading days, including today. I am biased and it’s important to DYODD!]