Investing in a World Gone Crazy

I am not a trader. Well at least not a day trader. I am a value investor/trader who believes in risk/reward and margin of safety etc. My average investment horizon for my average stock is probably around 12 months. In other words I try to guesstimate what will happen to a company’s intrinsic value on a forward looking, rolling 12-month period. I don’t make any investment decisions based on where I think gold or silver will be trading at except the fact that I believe we are in a long term bull market due to the underlying supply/demand imbalance. Given all this it makes little to no sense for me to be watching a) gold/silver every day or b) every stock tick of every minute of every day. The value of a company changes based on events and results etc which sporadically gets announced every lets say 3 weeks. All the time between an “event” the VALUE of a company is fixed more or less. What does it matter what gold does on September 6, 2021 for a company that will be drilling for years to come and the project being drilled might potentially become a mine in 10 years? What does however change every day is PRICE and therefore the Risk/Reward. When juniors go up or down 10% on a given day of no news it’s not the value that changes but the price of the company. Short term volatility is to be taken advantage of not get taken advantage of. On any given day that I have some dry powder and can’t decide what to buy I simply tend to add shares of companies that are down the most on said day. If I like company X, Y and Z equally and some days one of the three will be down 10% while the other two are flat I will simply add in the one that is down. Over months and years this will result in me owning a substantially larger percentage of these companies relative to if I had “chased” and bought the stock that was up the most due to FOMO (Fear of Missing Out). This is why it is so important to remember that the short term volatility in Price is noise and that the Value has not changed unless there has been a news release etc.

During grinding corrections like we have experienced over the last year in the miners one will often see rampant pessimism in forums and on twitter etc. A lot of people believe that there is some fundamental reason for stock X to go down on a given day even though it is apparent that almost every company in the whole sector is down on said day. The market doesn’t “know something”. There is nothing bad that has suddenly happened with company X. It just happens to be more sellers than buyers on said day. Lets say that 95% of juniors are down 30% or more over the last year. Am I to believe that the long term intrinsic value of pretty much the whole sector went down by more than 30% when gold/silver has stayed relatively flat and while the macro supply/demand picture has further increased (We take up more gold/silver each year than the sector can replace)? Of course not.  If anything the value should have gone up all else equal…

The market is totally, hopelessly clueless. It doesn’t “know anything”. Today’s market is in pure greed mode. Stocks are selling at record high PEs, thousands of cryptos are believed to have long term value and people sell any crap one could think off via NFTs. It’s a total joke and will end one day. In the meantime it’s a greed fest where people buy anything that is going up in hopes of a greater fool coming along who will pay up even more…

Should one be surprised that the most irrational markets of all time can both contain extremely overvalued securities like the average tech stock, cryptos and NFTs at the same time as perhaps the most undervalued sector of all time? I don’t think so. If the average investor (speculator) can buy something that is way overvalued he/she is probably capable of also selling something that is way undervalued (like junior miners)… 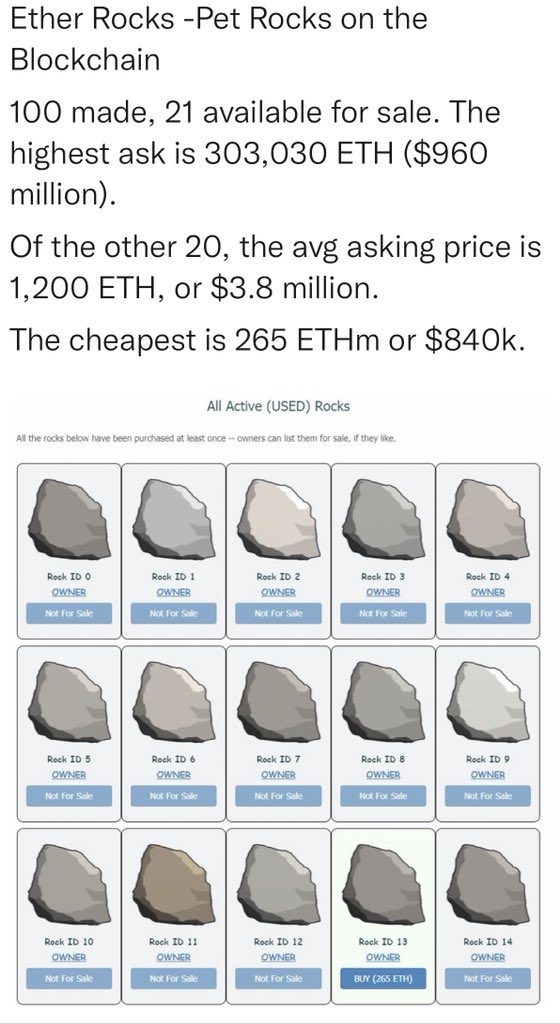 We’ve reached a time when actual “artificial pet rocks” seem to have great value but the realest of assets (physical gold & silver) which some call pet rocks are laughed at and not wanted. We are literally seeing the financial world go literally full circle…

It makes perfect sense why securities ties to the hardest of assets would be more underappreciated today more than perhaps at any other point in history. We are seeing peak artificial markets after all; Everything from peak money printing, rate manipulation (cost of money), stimulus checks (helicopter money), digital tokens and digitalized crap (NFTs).

So what if miners stay flat or go down for another year?

When this charade ends it will be the most vicious mean reversion we have ever seen I think. Peak overvalued artificial value vs peak undervalued real value. For every additional day of continued ramping in overvalued assets, and continued lackluster performance in the realest of assets, I simply increase my expectations going forward.

Yet 100% have opinions on investing…

What do you expect to see in forums, twitter and Facebook groups during major bottoms or major tops when majority by definition will be wrong?

Do you expect to visit said places during lows and expect to see majority of posts talking about what a great time it is to be a value investor?

Or do you on some level understand that 95% of people will be negative and talk about “giving up” when the opportunity is the greatest?

The best possible times to invest MUST coincide with people selling securities for the worst possible reasons;

Remember that pretty much everyone who voices their opinion believes that what they say is the “right thing”. But ask yourself. How many opinions comes from people who actually beat the market? If one does not have a history of beating the market the responsible thing would be not to give out “investing advice” to people for reasons which should be obvious. Yet, everyone wants to share their reasons for doing whatever they are about to do, or have done, or what he/she thinks others should do. When one owns a stock one usually wants to see it go up. When one sells a stock one usually don’t want to see it go up. Even though peoples intentions might be good it will probably be the wrong advice simply due to how few beat the market. I actually think it’s a net negative to visit forums etc often during sentiment extremes (highs or lows). If one does one should probably stick to reading comments form users which one is pretty sure actually has a history of beating the market at least. I see a lot of people explain why stock X is a sell or a buy with supreme conviction even though it is obvious he/she does not seem to understand investing. Some will look at a tree and make a strong opinion while totally forgetting about the forest.

If something is cheap it is cheap.

Yet, many will hold off on buying when things are cheap because they see short term risks to PRICE (share price). To that I say good luck buying when there are no short term risks to PRICE at all. Furthermore, during bottoms and low sentiment, the focus/discussion in forums will be on risks more than ever (which will make it even harder to buy obviously). If I know something is selling for 50% of what I think it is worth I don’t see why one would hold off on buying because there always will be a “risk” that it goes down until it sells for 30% of what it is worth. The vast majority will believe they did a mistake by buying something cheap that goes down in Price. I see it all the time. This is totally wrong in my book. A mistake is buying something that SHOULD go down and STAY down. If I buy something that goes down 50% within 6 months and then goes up 300% within 24 months for legitimate reasons I didn’t make a mistake. Well it looked like it at first but the end result was a great return. If I would have sold when it went down I would probably have  made a mistake however.

Compounding – The Most Powerful Force in The Universe

If I asked someone how one goes about turning $1,000 into $10,000 in five years I will likely get a response akin to: “Well you need to take a lot of risk, bet and get very lucky on a grassroot exploration play”.

First of all the odds of making a big, blind discovery is probably less than 3%. Second of all I have yet to see a junior explorer go up 900% on the day of the discovery announcement.

A bunch of people, including myself in the early days, believe that one has to be in prior to a discovery to make good money even though the bulk of the returns will come afterwards. Some of the best success stories around over the past years like Kirkland Lake and Great Bear Resources become ten baggers but it took years. Furthermore if one calculates the Compounded Annual Growth Rate (CAGR) they show around 60%-80% per year.

Take immense risk and blow everything into grassroot exploration plays in order to have a lets say 5% chance of seeing a stock go up 100% after a discovery or try and pick “probable” 50% returners on a rolling 12-month basis?

Take the road less traveled because it is not crowded.

Don’t get me wrong. I own a bunch of grassroot exploration plays but most if not all are very small positions. However, if anyone of those will make a discovery I am ready to add a lot.