A Reminder: You Invest in Companies

Because intrinsic value is the NPV of all future cash flows from a gold/silver project. If a junior makes a discovery which will be in production it matters little what gold/silver is trading at today.

I have no idea just how undervalued gold and silver is today but I can look at companies and have a pretty good understanding if I think they are cheap relative to the business fundamentals coupled with my assumed long term trend of gold and silver.

The day everyone seems to be waiting for is the day when gold and silver are trading significantly higher than today which is understandable. But the flipside of that is that when the bull finally peaks, sentiment is extremely high and we are in a bubble it also means that the future returns on (new) invested capital is negative for the foreseeable future.

The whole point of investing is buying something that is undervalued and then either sell it for capital gains or hold it for dividends.

The worst thing that could possibly have happened for me in hind sight would have been if the epic Q1 rally of 2016 just kept going.

Since gold, silver and miners peaked out in later in 2016 and was followed by a multi-year correction it meant that I had plenty of time to both read up on miners and to deploy a lot more capital in cheaper stocks (with higher Expected Future Returns).

Now years later I have been able to buy miners pretty much every month and the quality of my holdings has gone up a lot. This means that I expect to have an increased Return on Capital as well as a larger Capital Base to compound.

Do I think that gold and silver is a bull market?

Do I think the junior mining sentiment will never be positive again?

All I am focusing on is buying the best cases as cheap as possible every month because one day we will see bubble valuations. I am merely front running that time which might be 1, 2, 3, or >5 years away. Given that miners are historically cheap I expect some of my juniors to return more than 1,000% when that time comes. But lets be a bit more conservative for discussion’s sake. Does anyone think that even lets say a 200% return over 3 years is a bad outcome? Most people would (should?) kill to compound like that.

For some reason majority of people hate cheap stocks. Especially a prolonged period of cheap stocks. If one has absolutely NO more capital to deploy then that makes sense. It also makes sense if one has a short time frame when it comes to “needing” good returns. Otherwise it is bloody irrational to complain about being able to invest a dollar in cheap stuff since it means higher future returns. As I said earlier I am buying more miners every month and my snowball is growing therefore growing every month.

Lets say miners are valued twice as high as they are now and you have used all of your $10,000 of dry powder. Lets say the Expected Return going forward is 200% over 3 years. In three years you would then have $30,000. That’s a great return!

Now lets instead say you invested $5,000 at the same valuations as the previous example and then the stocks are suddenly cut in half the next day and stays down for a year. Lets also assume that the Expected Return on that $5,000 investment is still 200% over a 3 years. In other words your (now) $2,500 worth of stocks will rebound within that timeframe and have an ending value of $15,000 (200% higher than $5,000). Then say you are able to invest an additional $5,000 in the same stocks that were cut in half. The Expected Return on the second purchase is then 500% since the $1/share stock that got cut in half will reach $3/share in 3 years. The Total Expected Return on the total $10,000 investment in this scenario will therefore be (3 x $5,000) + (6 x $5,000) = $$45,000 which is 50% more than scenario 1. In other words even though the journey was more painful since one would have experienced a 50% loss for a while on the first investment the end result would be much better financially.

Think about the slide below and consider the fact that everyone and their mother wants scenario 1 to happen (a steady rising bull market where every day shows a paper profit in the portfolio). However, do realize that scenario 2 would make an investor far richer in the end since an investor would have plenty of time to buy cheap shares with high future Expected Returns: 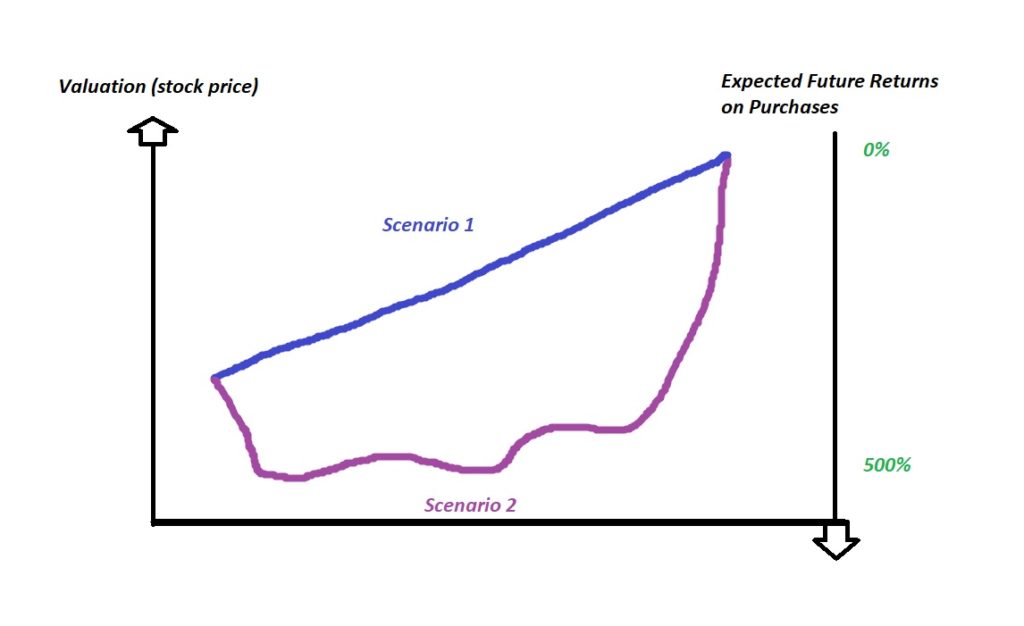 In short: If you want to maximize your financial gain you should cheer hard for the brutal but significantly more rewarding Scenario 2.

The trick as always is that you have to be right in terms of the final destination. Being right is not enough however. One obviously must have the conviction to not only stomach the correction by not selling but one must also have the fortitude to buy more whilst looking wrong for an extended period of time. One must also stomach a herd of “whiners”, “bashers” and “naysayers” who are themselves too dumb and/or weak to either get it and/or unable to withstand the pressure.

Making a lot of money and outperforming the market is not easy and 95% of investor do not beat an index over the long term.

As long as you have more capital to deploy there is no real reason to wish for a frothy market in the short term since it will mean that any additional capital deployed will see a Lower Expected Return.

My only “job” and focus is to BUY CHEAP stuff with a High Future Expected Return and then having the stomach/conviction to hold on until the final pay day.

I have no intention of selling any cheap miners and giving away High Future Expected Returns to someone else. If it’s cheap it’s cheap and if I sell I’m by default dumb and/or weak. If something that was already cheap and got cheaper because silver and gold went down one day and sentiment got worse then that’s an OPPORTUNITY and not a CURSE. This is also why I often tend to simply use any dry powder I might have on any given day buying whatever stock that is down the most on said day.

You can always tell who the 95% are simply by how they react to cheaper prices and better opportunities. They tend to get angry and complain… Then they still have no idea why they can never “catch a break” when it comes to investing even though it’s easy to see why that is.

If the market looks great then the Future Expected Returns would be low.

If the market looks shit and is cheap then the reward for stomaching the current misery is more dollars in your pocket sometime in the future.

One thought on “A Reminder: You Invest in Companies”