I tend to mostly focus on juniors that have long “runways”. In essence I want upside diversification as well as high blue sky potential. One of my biggest mistakes over the last few years was going too heavy into a cheap junior with one project and more or less one target. Furthermore the target wasn’t even de-risked so it was basically high octane wildcat drilling. Needless to say the company did not hit anything of substance and it only really had money for one drill campaign. That was a few years ago and still the company hasn’t really done anything meaningful. In other words it lived and died with one wildcat drill campaign. Even though there was certainly a shot that it could become a >10 bagger it was quite poor risk/reward in terms of long term compounding potential (You can’t compound a permanent loss)…

So I guess the main lesson was that I was too greedy and bet too much in order to “get rich quick”. The obvious factors that made it a poor risk/reward case was a) Poor access to capital and b) No margin of safety, and c) No internal diversification.

If the company had good access to capital it could drill more holes and/or quickly get another project. The former would lead to some SP excitement again due to renewed drill speculation and the former could breathe new life into the company. Unfortunately neither came to pass in 2+ years.

If the company had some margin of safety, in terms of some ounces in the ground already, then there would at least be some meat on the bone. Potentially the company, which was already cheap, could have been picked up by another company or some kind of deal could be made for the asset in order to advance it (in case of lack of funds). Unfortunately there were no ounces in the ground and the implied value of the project obviously went down with the lack of good drill results.

If the company had other promising projects it should be able to shelf the flagship project and potentially be able to raise some cash and get some excitement going for another project in the portfolio. Sadly the company only had one “real” project.

Nowadays I always want to see a grassroot explorer to have at least decent access to capital (you can’t create value if you don’t have money to spend) and preferably a diversified portfolio (More projects/targets equals more bullets in the chamber). If this is not in place then one is seriously risking a holding becoming “dead money”. And no, a share price not performing, while company fundamentals get better is not what I would call dead money. This is simply because the risks are increasingly to the upside and it’s just a “postponed” return. Really dead money is when there is no reason for a stock to go higher.

Anyway, the “long runway” part is an important part for a long term investment/speculation. This pretty much has to be in place in any junior I put into the family portfolio because I don’t have the time to “value trade” really. I simply want the picks to be akin to “fire and forget” investments (Note that this requires a good and honest management team as well). So what are some examples of juniors with long runways where I feel I could come back in a year and expect the value to have increased?

A good example is Eskay Mining which recently came out with eye watering BLEG results: 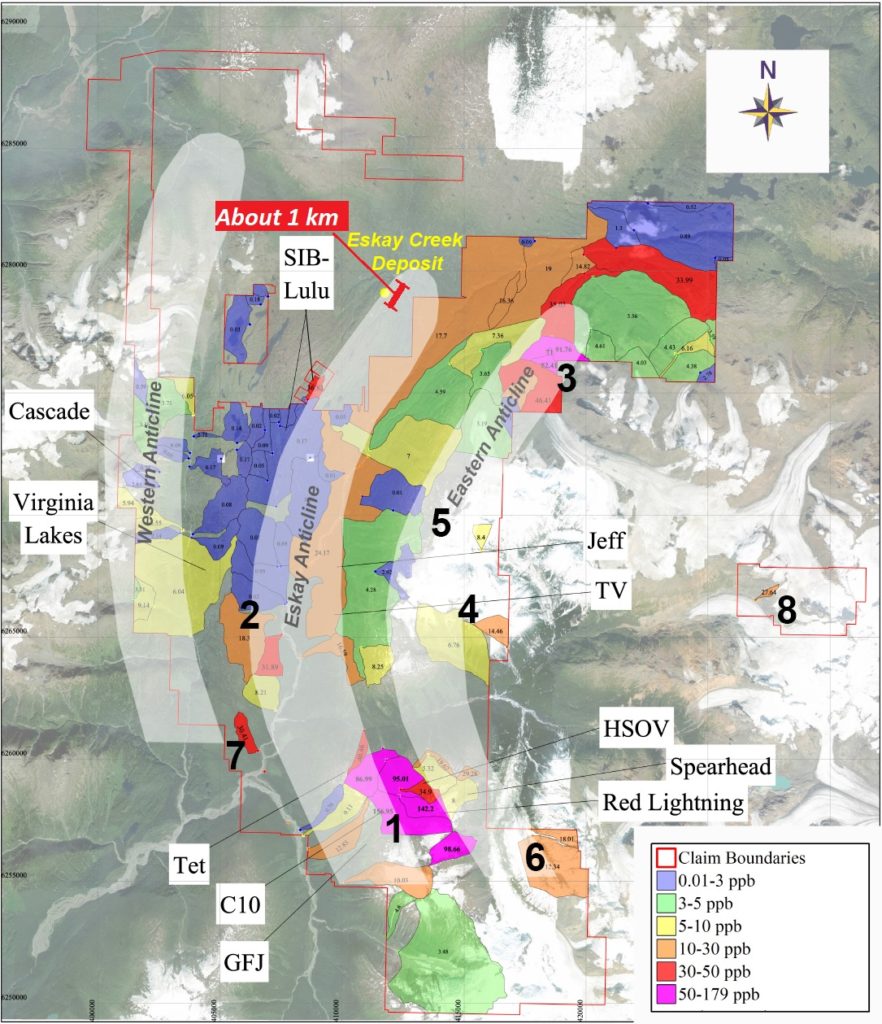 What you see in the picture above are three Anticlines (in white) that are around 15-20 km long and run through Eskay Mining’s ground. These Anticlines are areas where the ancient seafloor that hosts the legendary Eskay Creek deposit outcrops or nearly outcrops on surface today. More importantly the BLEG results suggest that there is indeed a lot of “golden smoke” along vast portions of said Anticlines. The original Eskay Creek deposit was worth billions and only had a footprint of around 1km in length (red line added by me)…

In other words it should be pretty obvious why I think Eskay Mining has some of the highest, absolute blue sky potential around today since one could fit multiple Eskay Creek deposits within those three major trends. With the company already having great success at the very large TV/Jeff target and the de-risked nature of SIB-Lulu I would argue there is, at least almost, a margin of safety in the stock as well. Furthermore, one juicy detail is that the highest BLEG results is in the south near the Tet target where chip samples grading upwards of 40,000 g/t Ag were found. In other words this area just became red hot.

Needless to say the runway I see for Eskay Mining is huge which is the reason why it is a major long term holding of mine. The tier #1 jurisdiction and the apparent quality of the VMS deposits really pushes it over the edge in my book. One way I look at it is like buying TV/Jeff and SIB/Lulu, which are both de-risked, and then get 12+ targets for free. In other words I see Eskay Mining as having the absolute potential of >10 juniors but in one entity that already has a big discovery.

As I said previously a lot of my holdings have long runways and I could add some additional examples:

Cabral Gold: Entire region with alluvial activity and gold confirmed by drilling all over the place

FireFox Gold: One of the biggest land owners in the Finnish gold rush

… I believe all of the companies mentioned could easily be busy for >10 years to come and most already have smoke and/or ounces in the ground underpinning the company. Said companies also have shown to have access to capital which is obviously required  in order to create value from the long runway.

Note: This is not investment advice. I own shares of all companies mentioned and some are sponsors of my site. Consider me biased and do your own due diligence. I can buy or sell shares at any time.