I have been stocking up on additional shares of GFG Resources ever since I talked about the company during a recent Kereport interview and would like to explain why in more detail. First of all, the fact that Newcrest signed a staged option agreement that could potentially see Newcrest paying $100M for a 75% stake in the Rattlesnake Hills Gold Project (“RSH”) made me very interested. Don’t get me wrong, I think GFG has great management and their Timmins ground is very interesting, but to see the perhaps premier deep (gold) exploration company in the world take such an interest makes RSH the most interesting project in my eyes (At least at the moment). I already had a small stake in GFG, but after going through some technical reports and previous News Releases, it made some things stand out in the latest deep drilling update: 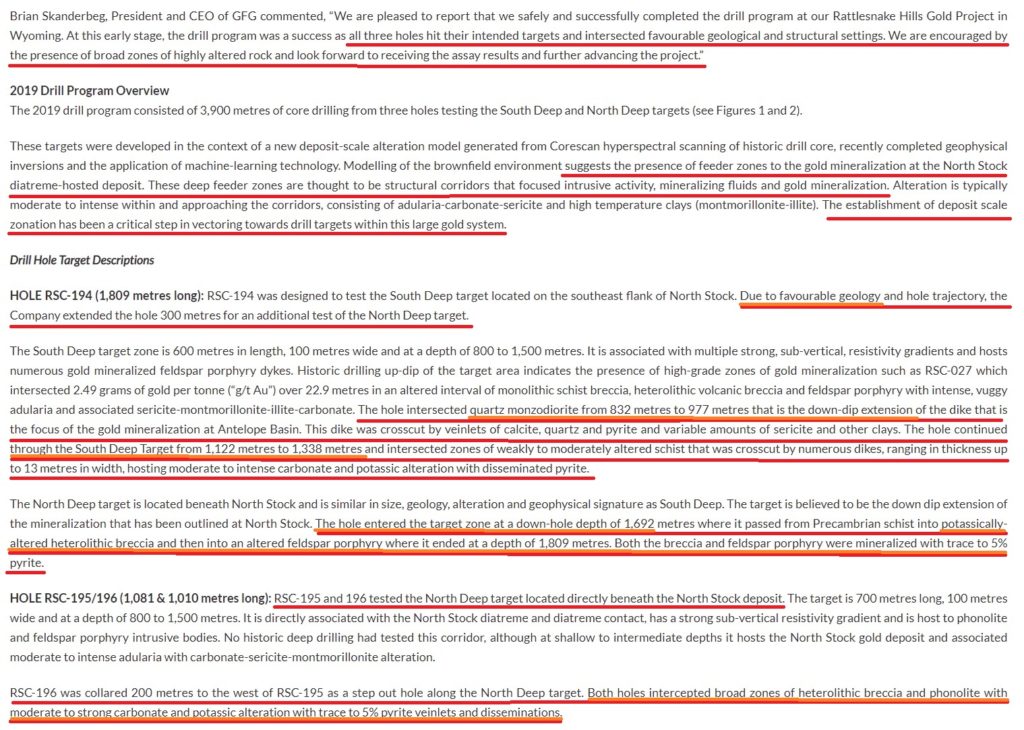 … First of all it sounds like the 1,809m long hole intersected three different potentially mineralized intervals; 1) The down-dip extension of the gold bearing dike at the Antelope Basin target (within 832-977 metres), 2) The South Deep Target (within 1,122-1,338 metres), and 3) The North Deep target (within 1,692 to end of hole at 1,809 metres). The two other drill holes, holes RSC-195 and RSC-196, ended up both testing The North Deep Target but 200 metres apart. RSC-196 is described as a “step out hole”. Now this all sounds pretty encouraging, and it’s also interesting to compare the “planned” drill holes schematic to what was actually drilled at the end of the day: 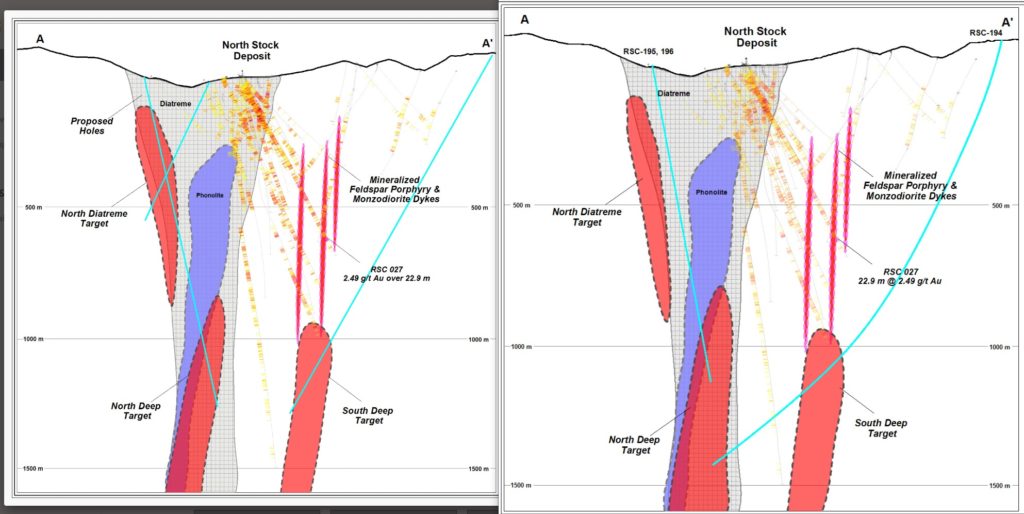 Below is a plan map that includes the drill collars and the current main (deep) targets at RSH (Of which only two will have been tested with these three holes): 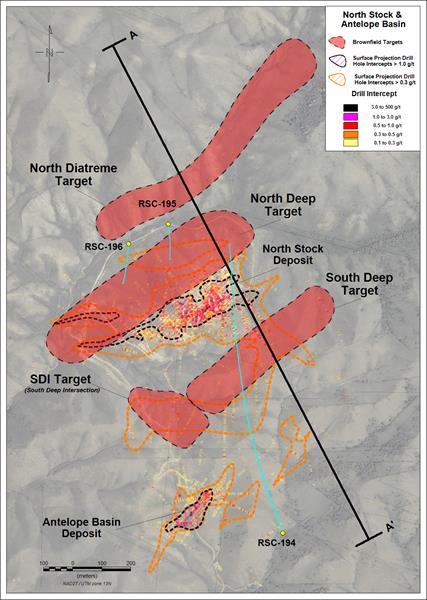 … The North Deep Target does seem to be the largest one of the four. The three drill holes will have tested this target on a vertical extent of what looks to be around 500m  (top intersection of RSC-195/196 to RSC-194 end of hole) and also 200m in width (RSC-195/196). With that said, I will re-iterate that RSC-194 intersected three different (and potentially broad) zones of interest.

When combining all the information above,  with some information from previous NRs and Technical Reports, an interesting picture emerges in my opinion: 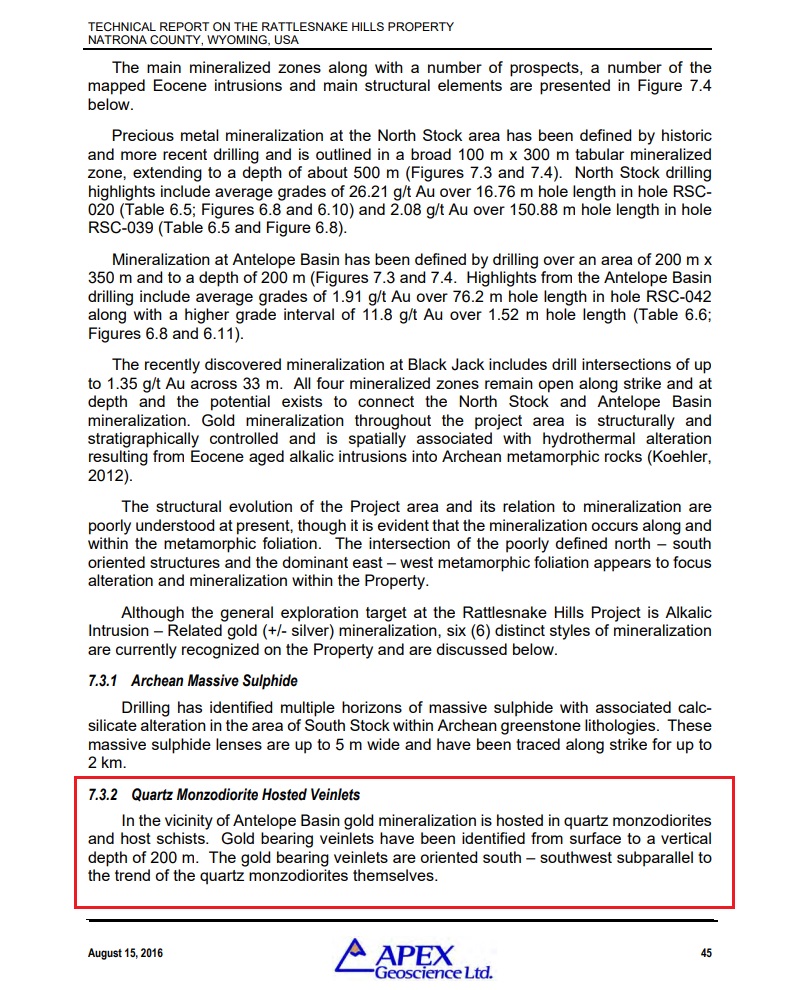 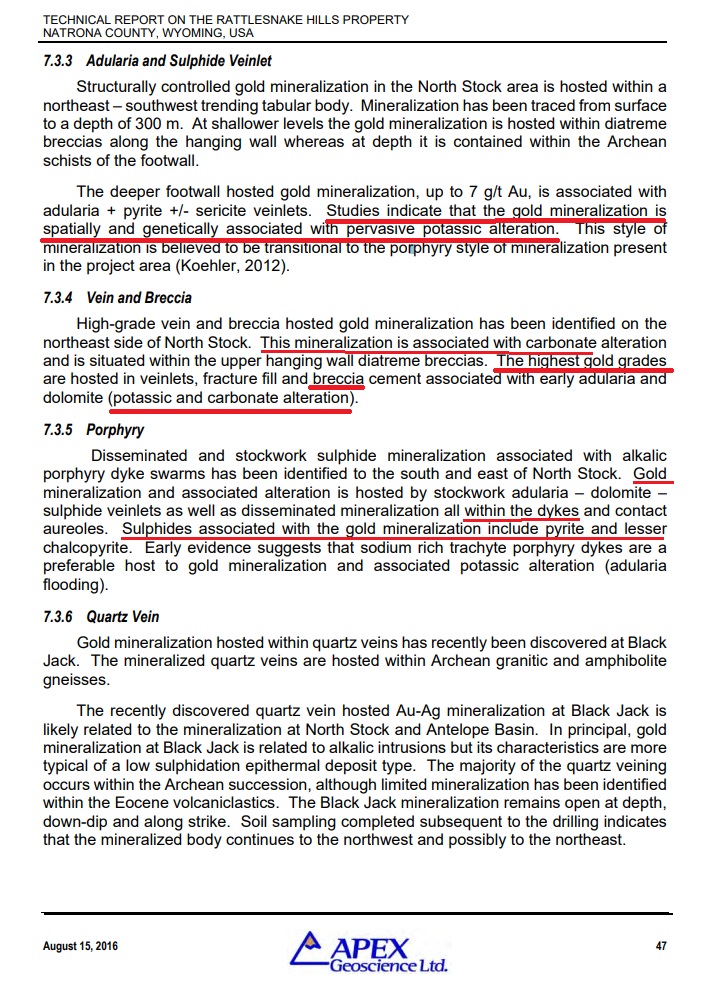 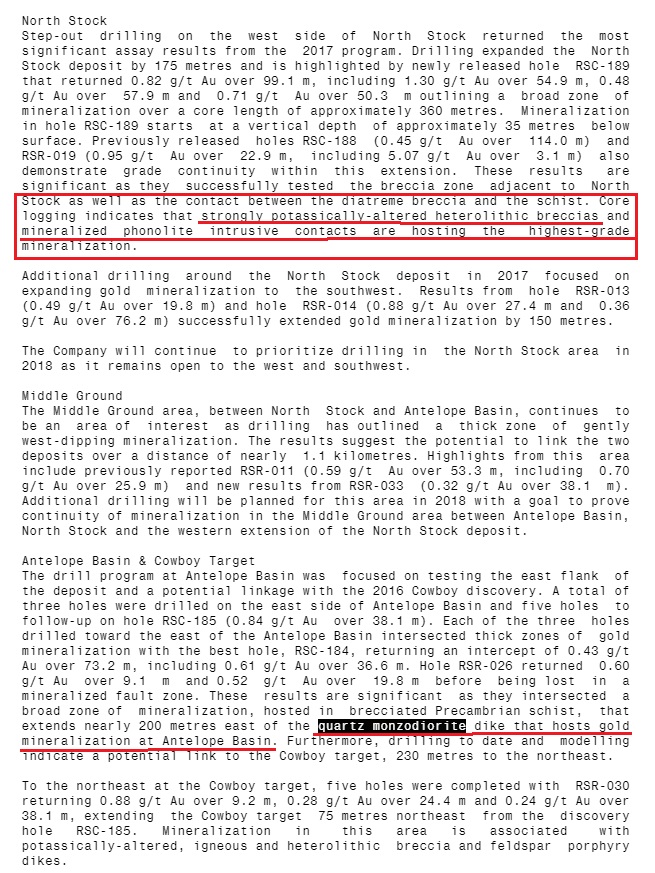 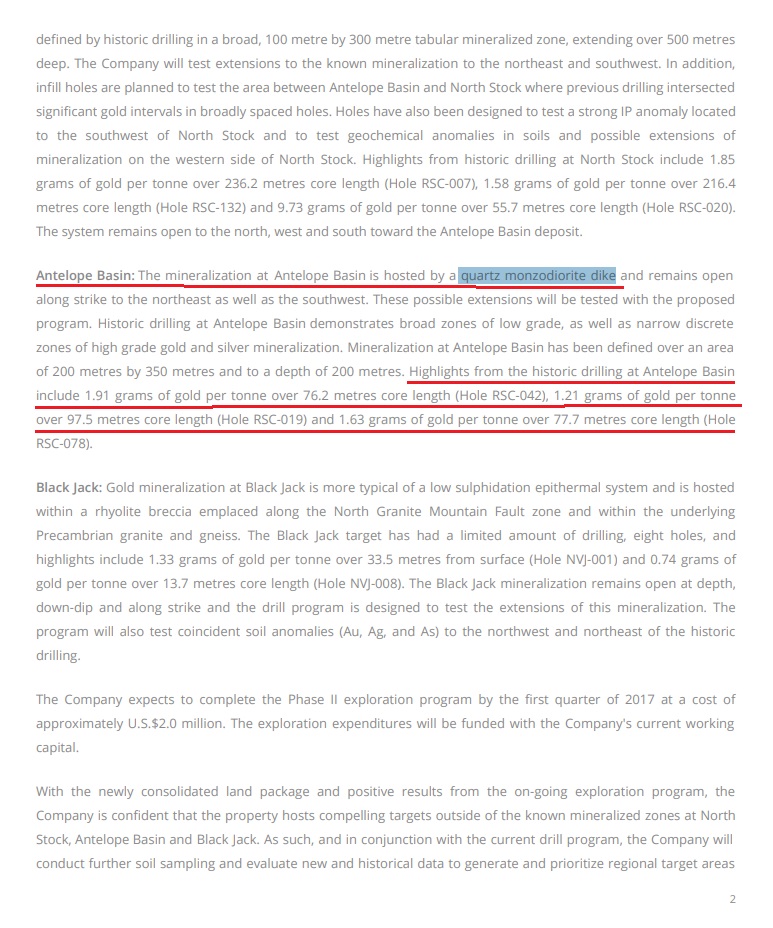 … In other words, it sounds like GFG/Newcrest hit three zones which sounds a lot like the type of rocks that carried gold in the shallower parts of the system. At this depth, the grades obviously needs to be higher than in an open pit oxide scenario, but it feels good to have probably the world leaders in underground bulk mining as backers.

I own shares of GFG Resources for the reasons mentioned in this article. I consider GFG to be quite cheap at a Market Cap of C$21.5 and an Enterprise Value of about C$18.5M (~C$3.5M in cash) given the fact that the company has great management, backers and also an ongoing drill campaign at their large Timmins Project. With GFG trading near it’s all time lows, it doesn’t feel like there is even a “drill hype premium” at work… But then again, we are in “tax loss silly season”. I mean, I think this is one of the most exciting drill campaigns out of any junior and it already has a stamp of approval from none other than Newcrest. Granted a blue sky scenario would leave GFG with “only” 25% of Rattlesnake Hills, but 25% of a Newcrest sized projects would be worth a helluva lot more than GFG’s current Enterprise Value. But, there are no guarantees and success is the exception not the norm despite all the (IMHO) positive indications so far. Another way to play it is of course to wait for results , which I believe will come in early January and try to get in if they hit something. In other words I’m not betting the farm regardless of how good it looks ATM. Lastly, keep in mind that I am not a geologist nor a financial adviser. Always do your own due diligence and I can’t guarantee the accuracy of this article. Since I am a shareholder I might be biased.