In this article I will explain why I have a fairly large chunk of Goliath Resources (“Goliath”) and why I was delighted to have the company come on as a banner sponsor.

My Case For Goliath Resources in Short:

Goliath simply has one of the best looking, early stage targets that I am aware of. There has there been multiple wide, high-grade channel samples taken from the “Surebet Zone” over 1 km of strike. Furthermore the zone has been confirmed over a vertical extent of 500m with 1km inferred down dip extension. The  numbers from the channel samples taken so far comes in at an impressive average of 10.68 g/t AuEQ over 9.84 m (That’s over 100 gram-meters). In a recent presentation by Quinton Hennigh (Crescat Capital) he stated that the implied target based on the potential dimensions seen so far is over 1.7 Moz AuEQ. If the average width, grade and conceptual target dimensions of the mineralization found on surface ends up being close to the mark then Goliath might end up having a very valuable deposit (Note that this is “only” the first conceptual target for one of multiple potential structures)…

Right off the bat it’s one of the best looking (and somewhat de-risked) high-grade targets in a tier #1 jurisdiction that I know of but when you also combine it with the modest Enterprise Value of the company I readily deemed Goliath to be a big “no brainer” in terms of risk/reward. Goliath also has an early stage project called “Lucky Strike” which measures an impressive 31,511 ha and is also located in British Columbia.

My Even Shorter Case for Goliath Resources:

First of all, a good location: 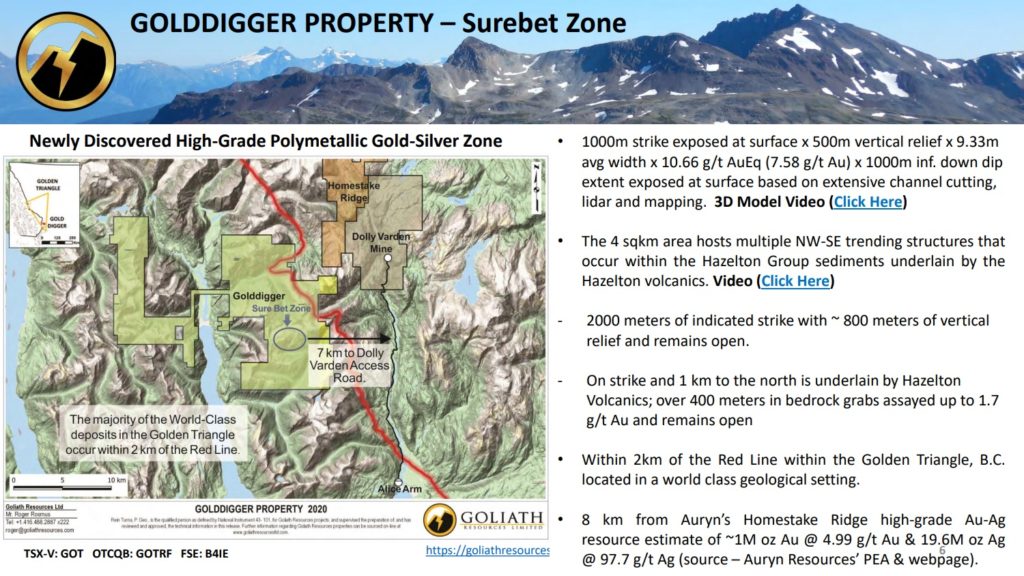 The flagship Golddigger property is located in the world renown “Golden Triangle”, British Columbia, which is a tier #1 jurisdiction. As you can see in the slide above the project is more specifically located very close to Auryn Resource’s Homestake Ridge project as well as Dolly Varden Silver’s flagship project. Not only does this mean that there is infrastructure nearby but it also increases the implied value of all projects due to the obvious potential of synergies. Furthermore, larger players like Hecla Mining and Ascot Resources are active in this part of the Golden Triangle.

To say that the Golddigger property was target rich would probably be an understatement.. 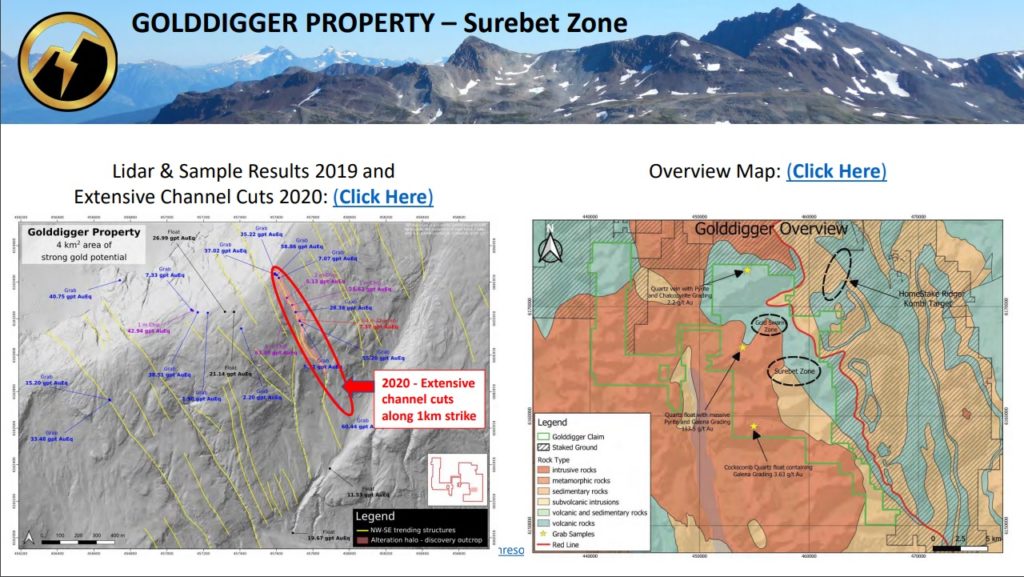 … Notice the Surebet zone/structure where it says “Extensive channel cuts along 1km strike”. Here are some results from said channel cuts: 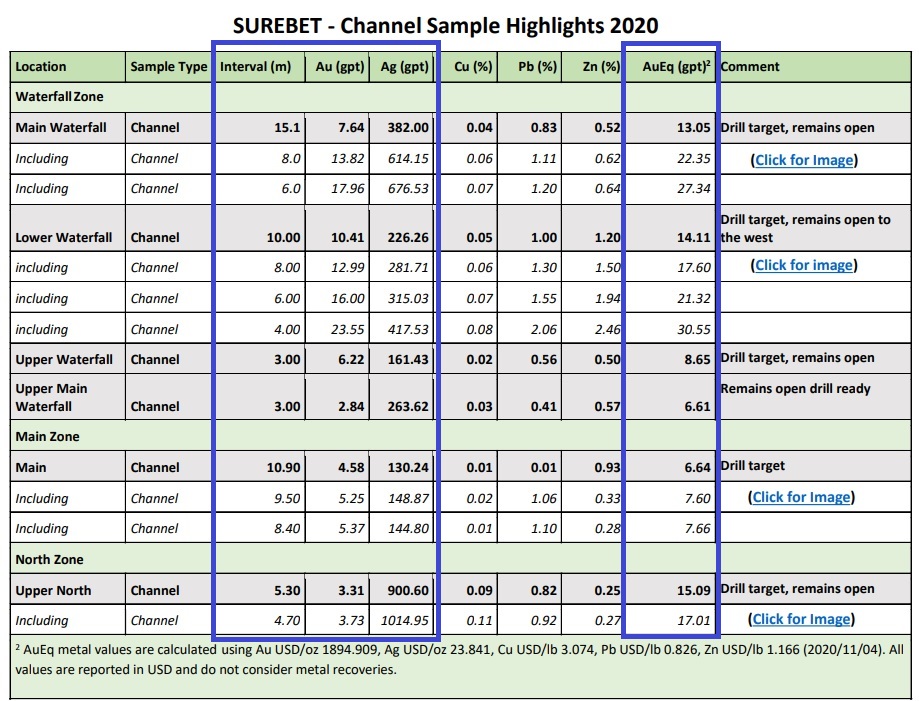 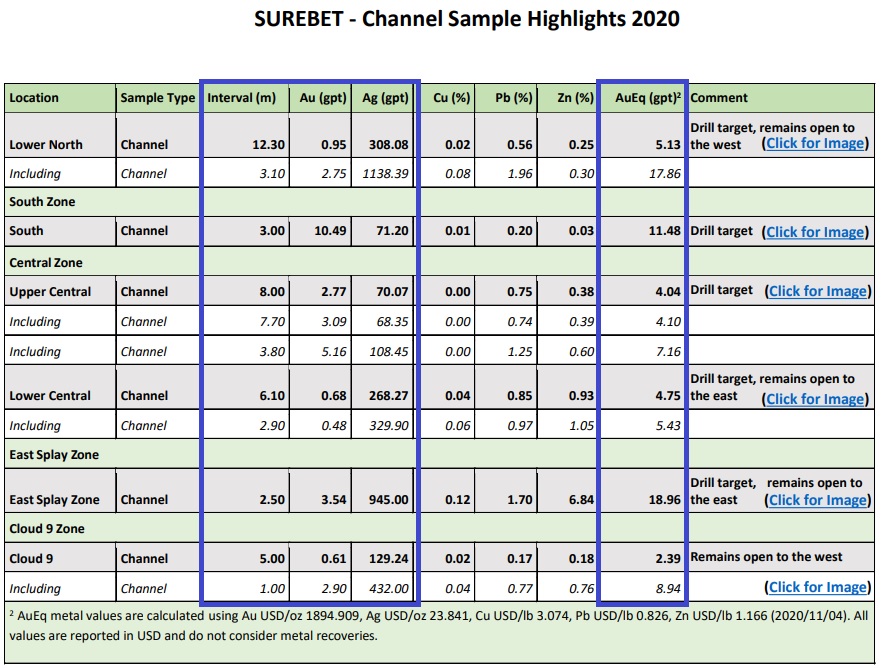 … Quite impressive to say the least and with pure silver grades up to 1,015 g/t over 4.7 m there is also something for the silver bugs. Those samples are obviously taken from outcrops on surface and then the question becomes what kind of size potential is there at depth? Well, the main structure has been traced over the crest and down the slopes of the mountain on both sides like so: 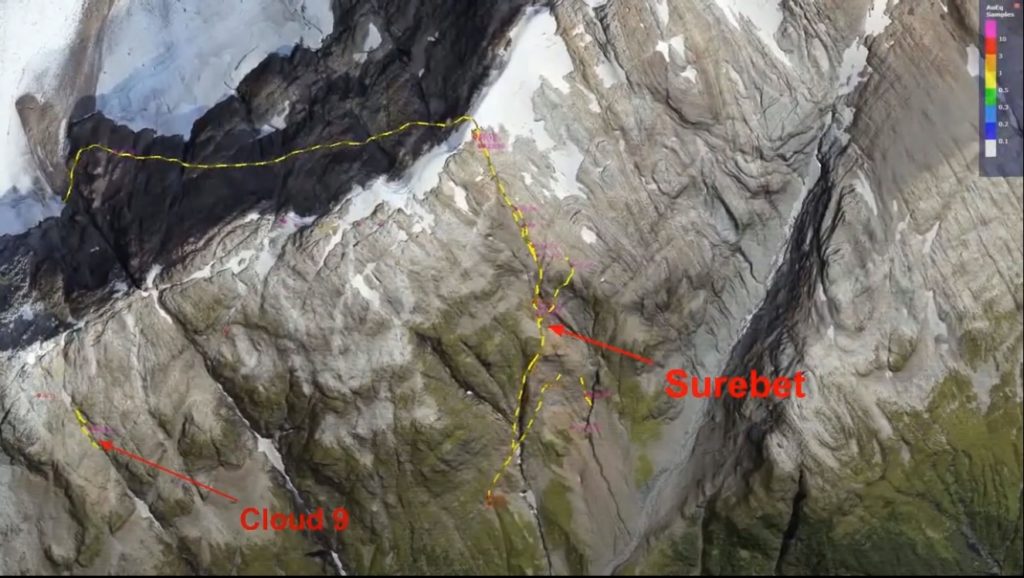 … Which generated the following conceptual target that Quinton Hennigh stated could have an implied endowment of over 1.7 Moz AuEQ: 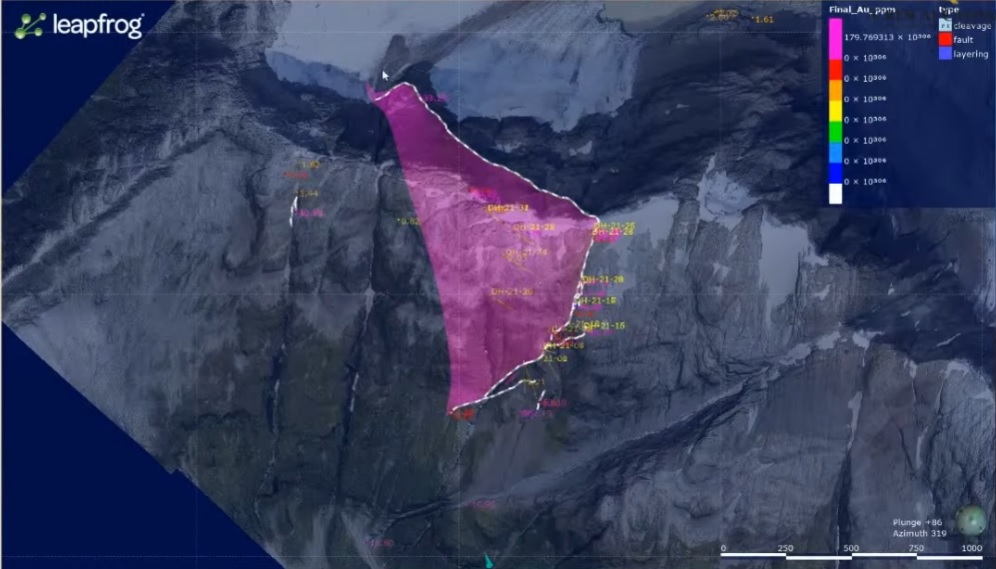 To have such a relatively de-risked “starter” target is pretty fantastic in itself. But it does not factor in any potentially economic splay structures and on that note there is a lot of smoke in the immediate area: 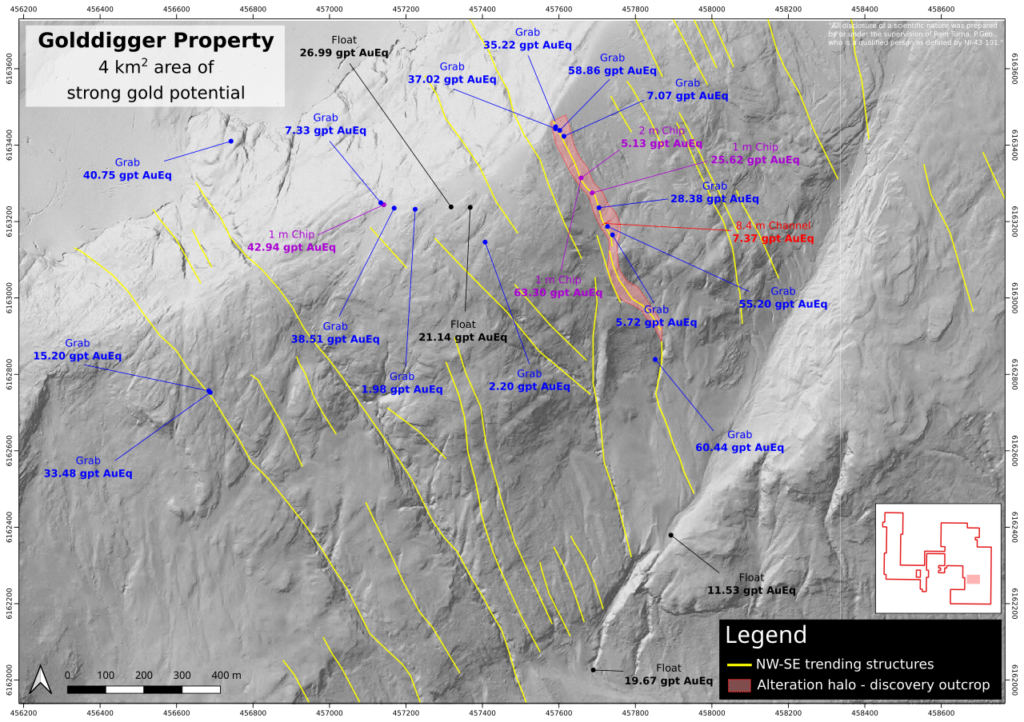 On that note Quinton stated the following in his presentation:

“Way down here… notice there is one sample there… Could this connect through the trees down to here(?)… Quite possibly”

… In regards to this: 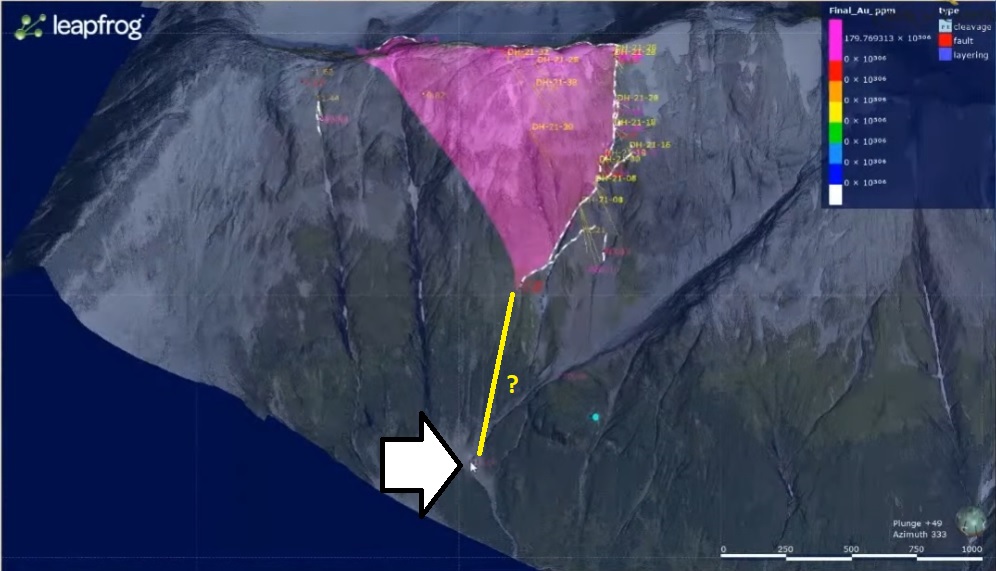 … He then continued on with “In other words this ‘triangle’ might just be the beginning”. In other words there is potential for a big system(s) to be present within the Golddigger property.

Goliath has tested the Surebet zone over 1km and got very good results. When triangulating a conceptual target based on where the mineralization has been confirmed it results in a say 1-2 Moz AuEQ target. However, this conceptual target is potentially the “tip of the iceberg” since the mineralization might continute down to considerable depths coupled with the fact that there might be splay structures coming off the “mothership” to quote Quinton.

Goliath has a conceptual, initial target that has shown excellent widths and grades on surface and seemingly has the potential to host 1-2 Moz AuEQ in a tier #1 jurisdiction. Furthermore it has the potential to be much larger than that and there might be additional structures of interest. As an added bonus the company has a second district scale project in British Columbia as well…

The real kicker is that Goliath Resources currently only has an Enterprise Value of around US$13.5 M.

… This highlights why I love the current market environment in the junior mining sector because you can buy a high quality exploration play like this at a price which would suggest gold was trading at $1,200 or something (or like it was a pure grassroot play). It really is unbelievable that gold is trading close to $2,000/oz and silver close to $30/oz and one can still buy stuff this cheap. We’re not even close to the valuations seen during the 2011 peak. With that said the stock has run up lately and after each up day I re-check the valuation and conclude that it is still undervalued relative to what we know about the Golddigger property.

What would a fair value be for Goliath? I can’t answer that but if we assume that 1 Moz of a high quality deposit (good widths and grades) could fetch a value of say C$100 M in a jurisdiction like this I guess one could say it prices in a 13.5% chance of there being 1 Moz AuEQ at Golddigger. What if the initial, conceptual target ends up being closer to 2 Moz AuEQ and the system(s) is a lot bigger than that?

All in all I really like the de-risked nature of the “Surebet” target/zone and the fact that it could be a big system(s). I expect the stock to revalue higher as we get closer to drilling season.

There is a bit of noise since there was a consolidation of shares earlier this year but on this the following chart it has firmly broken out of a 4-ear consolidation which makes me think the stock shouldn’t have that hard of a time to revalue closer to what fair value might be: 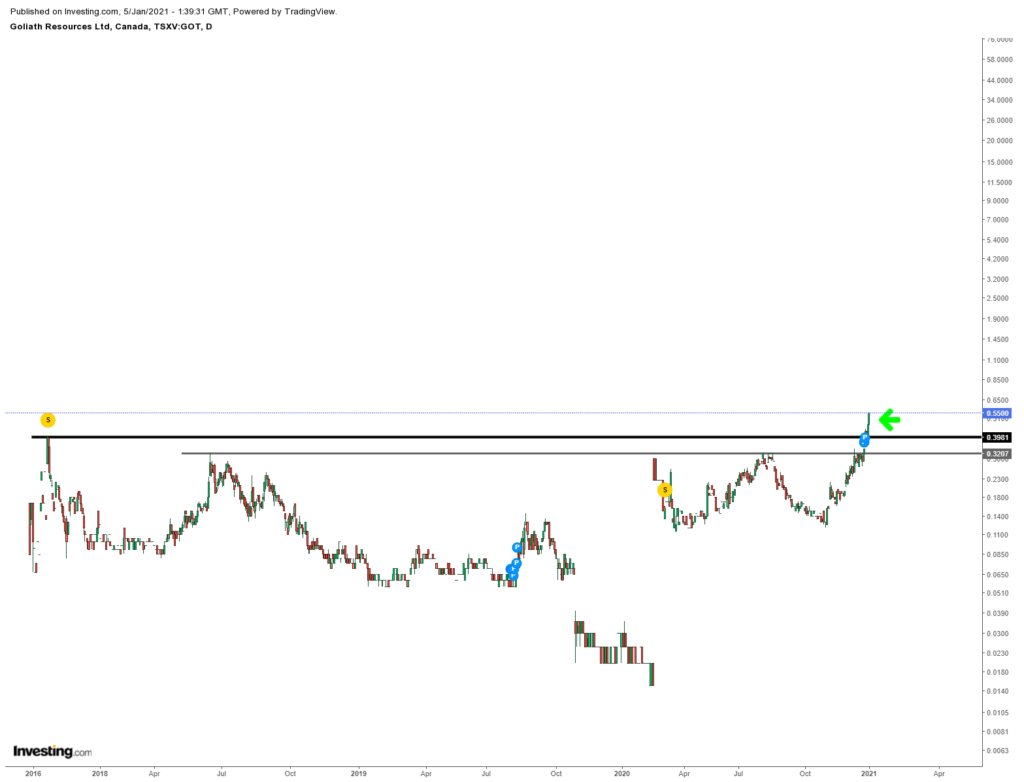 Note: This is not investment advice. I am not a geologist nor am I a mining engineer. This article is speculative and I can not guarantee 100% accuracy. Junior miners can be very volatile and risky. I have bought shares of Goliath Resources in the open market and I participated in the latest Private Placement. I can buy or sell shares at any point in time. I was not paid by any entity to write this article but the company is a passive banner sponsor of The Hedgeless Horseman. Therefore you should assume I am biased so always do your own due diligence and make up your own mind as always.