At first I thought Golden Tag was just a very mature beta play on silver. After all the company has a very large resources of 210 Moz AgEQ which includes 115 Moz of pure silver. Furthermore this resource is probably understated due to reasons that I will touch on later. Anyway I am not usually that interested in pure beta plays, even though I do think silver will explode higher in the coming years, but after talking to management I learned that there are four exploration targets that have the potential to transform the deposit in more ways than just adding ounces. For the reasons just mentioned I have taken a position in Golden Tag and agreed to have the company come on as a banner sponsor.

My Case For Golden Tag Resources

If one is bullish on silver I think Golden Tag is a good proposition for a number of reasons. First of all the company already has one of the largest silver deposits out there which should provide some of the best beta (leverage to silver) around. Second of all the management team is very experienced and has been involved in multiple mine builds which is a big vote of confidence in my book. Thirdly the company are not sitting on their hands waiting for a rising silver price to “create” value but rather looking for ways to potentially add a lot of value via targeted exploration (more on this later).

An ideal scenario would be for the company to hit big in one or more of the four main targets and thus perhaps significantly increasing the resource and NPV of Sani Diego. Couple this with a rising silver price and I think Golden Tag could do very well in a raging silver bull. The big resource in place provides the [margin of safety + Beta] and the exploration will provide the Alpha upside potential. It’s worth mentioning that the San Diego deposit is only 2.1 km away from Penoles’s (a major miner) El Cobre Project.

To sum up I think there are (mainly) five different factors that could lead to re-rate higher:

In an ideal world we will see a rising silver price coupled with added value being unlocked from one or more of the targets mentioned above. Lastly, there is also potential upside from increased recovery number that I will touch on later. 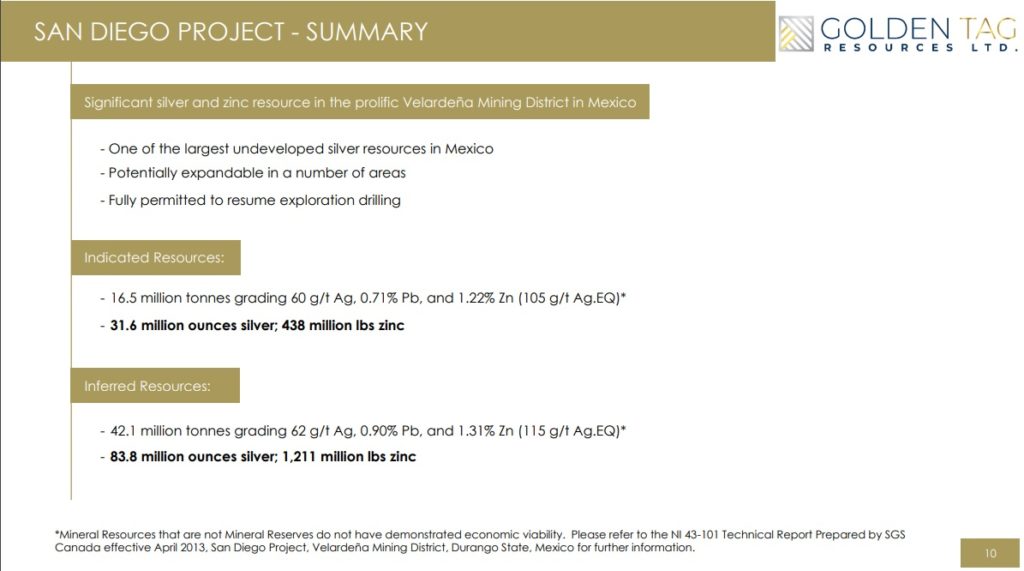 Relative to peers it is also one of the most undervalued juniors, at least on an EV/Silver ounce basis: 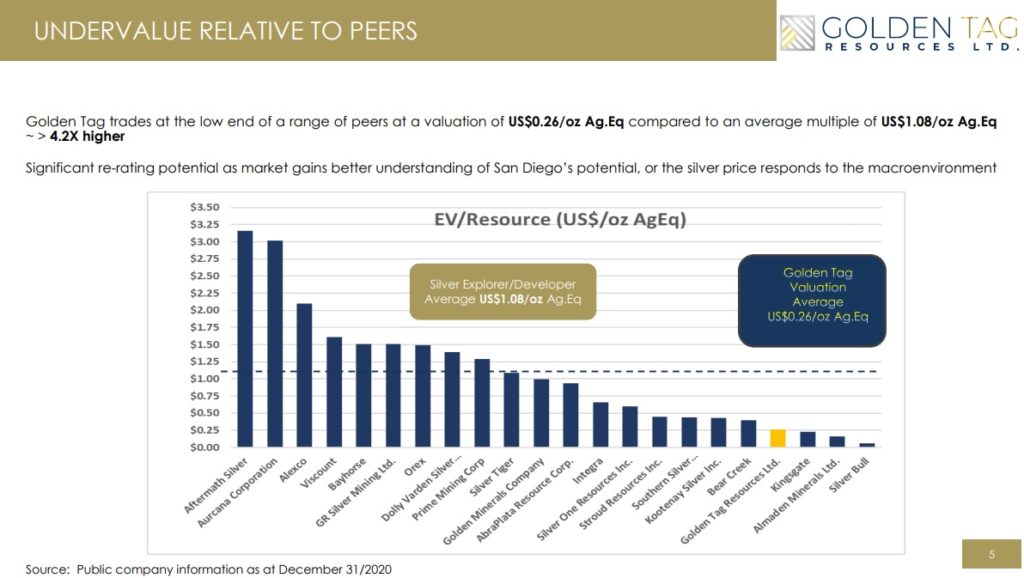 The slide above coupled with the large silver resource are two big reasons why I think that this stock could do very well if/when the masses enter the silver sector for real. A very positive aspect of the San Diego project is that it definitely is located in mining country with multiple projects nearby (two owned by a major to boot): 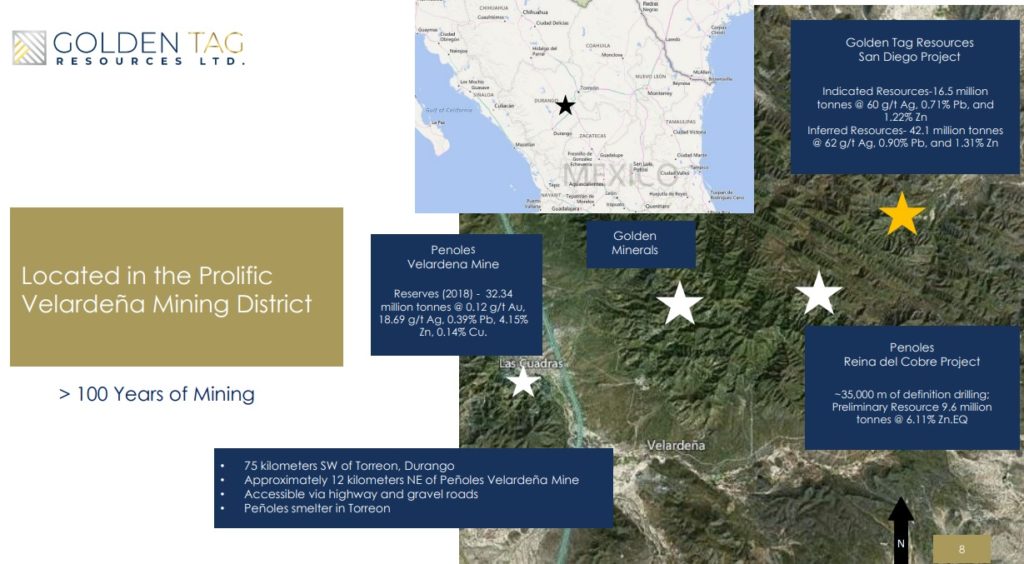 First of all, the total resources are calculated net of recovery loss. Why this is important is a) The resource is understated relative to peers that publish resources without subtracting recovery loss, and b) The recovery numbers used were not based on metallurgical tests from the actual project but instead of another project nearby. This opens up the possibility for additional upside in terms of resources given that metallurgy could probably be optimized which could lead to an increase in recoverable ounces. 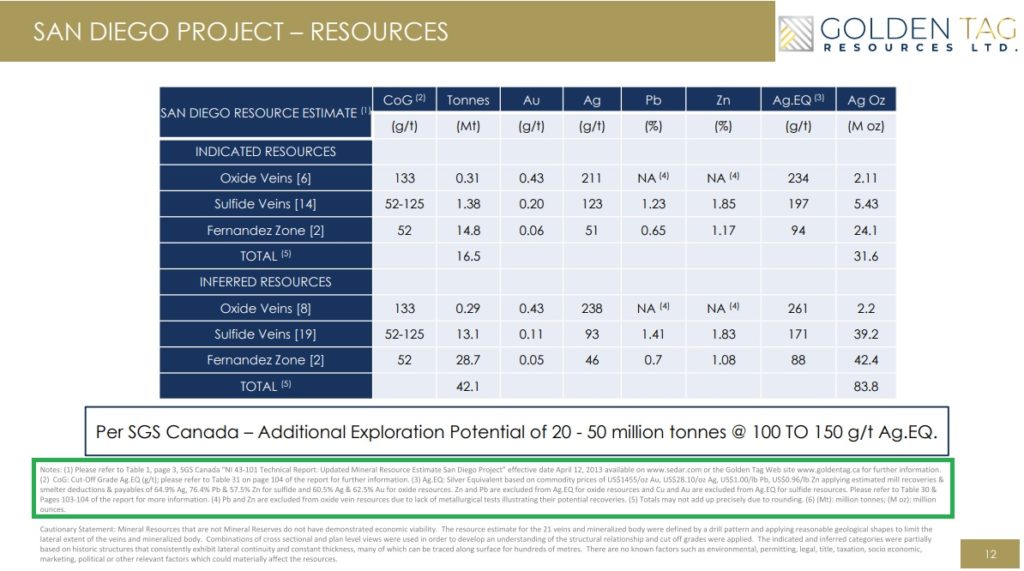 … Upside from increased recovery numbers is something I would think is not only potential but thankfully probable. In other words the resource could get a hike from this alone.

With the above said I think the bigger upside potential is found in four different exploration targets. What I like about the potential scenarios that could play out is that any of the four main targets could probably affect the intrinsic value of the project in more ways that simply adding ounces. If they prove up some of the near surface targets then that might result in a scenario where there would be a shallow starter pit (or two) etc. If they have success at some of the deeper targets, that are around the same level as the current resource, the that could result in more ore per vertical meter. This should increase the ROI per sunk cost. What I mean by that is if underground development is done to a certain depth then there could be more ounces pulled out at that depth with decreasing CAPEX per ounce.

The following slide sums up the Current Picture and the four main targets that could unlock more ounces and value: 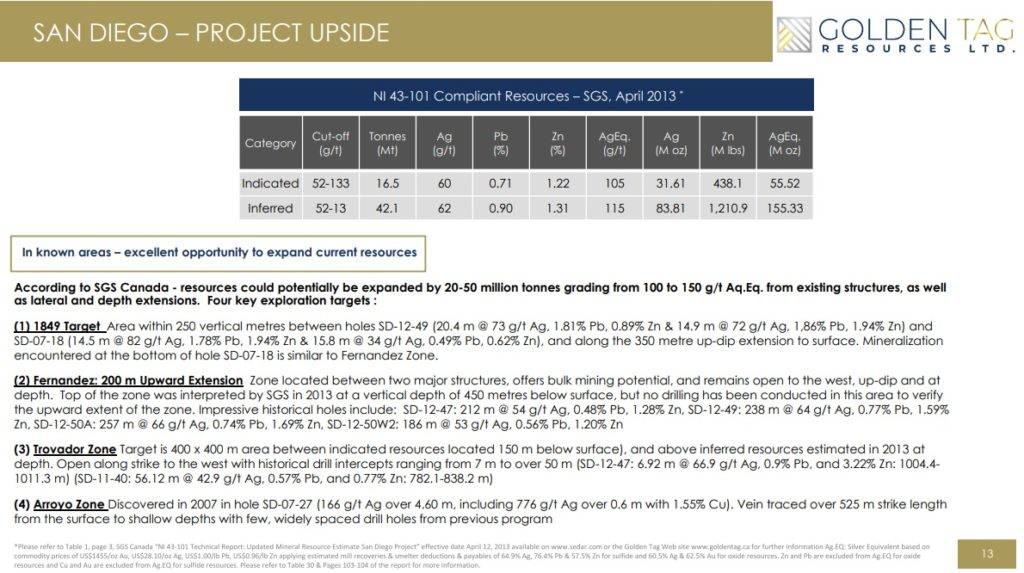 Said targets are described as follows: 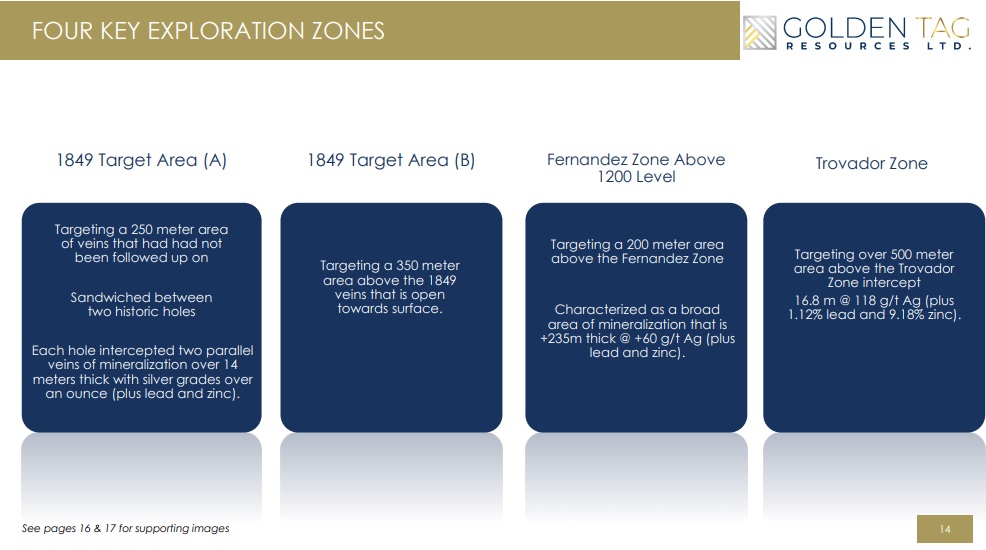 Below is an overview of the four main targets and one can see that they are all in close proximity to the current resource: 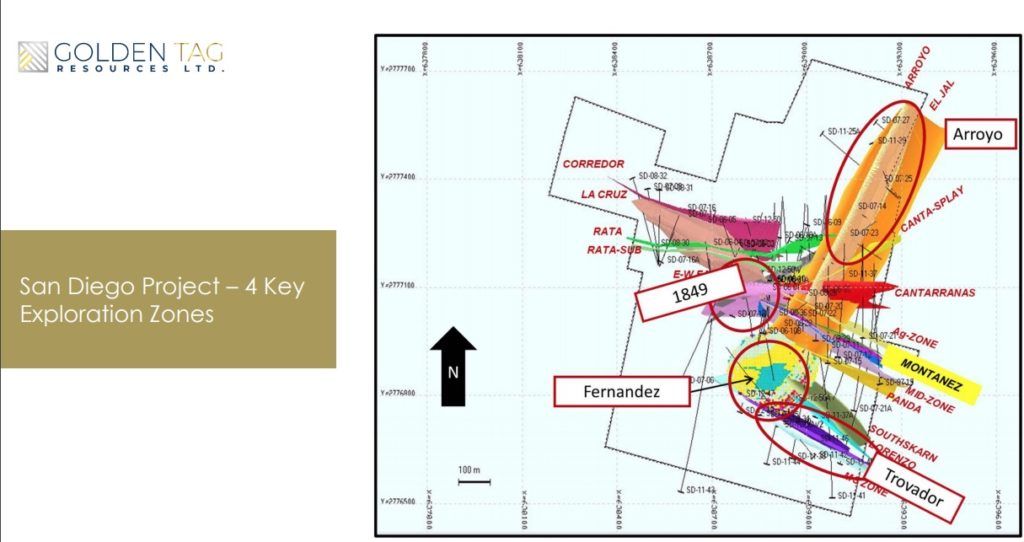 Below is a cross section where one can see the 1849 target and the potential (shallow) extension of the Fernandez Zone: 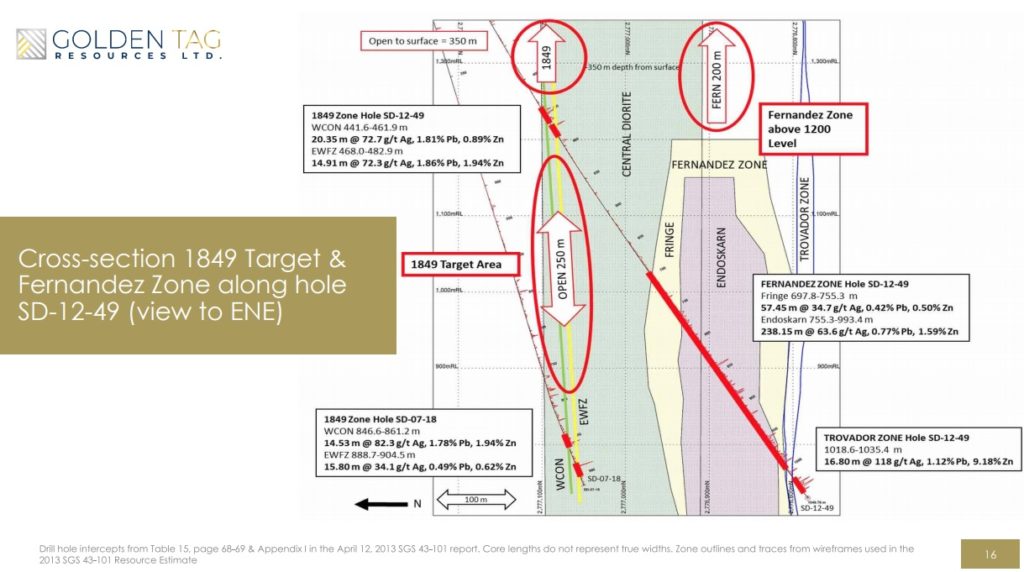 Golden Tag is an obvious High Beta play on silver but I do see avenues for internal value creation as well. I have no idea if or when the San Diego project might be bought out (by its neighbor perhaps?), or if/when it might become a mine, but one thing I put a lot of weight on is the fact that the current management team have a lot of experience when it comes to actually building mines. Thus I think these guys would not have bothered with taking on this project if they did not believe it has the potential to become an actual mine: 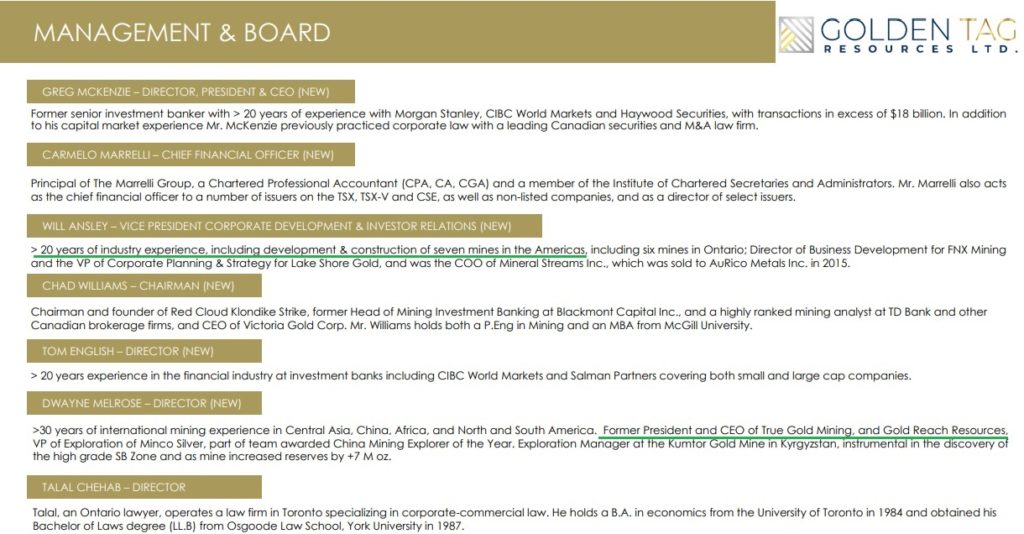 I am not betting the farm on Golden Tag put I have bought some shares in the open market since I want to have some exposure (both beta and alpha) to the silver sector.

From a long term perspective I would argue that Golden Tag has pretty much been consolidating for a whopping 35 years. It’s quite noisy on the weekly but if this will indeed be the bull market of all bull markets in silver then I simply think that the stock could go to levels that are uncomfortable to think about currently. Even though the swings as seen in the chart below look large it is actually a quite tight range given that most tops have been between C$0.60-$1.00. Thus it would not take that much (around a double from here) to have the stock breaking out to new all time highs… 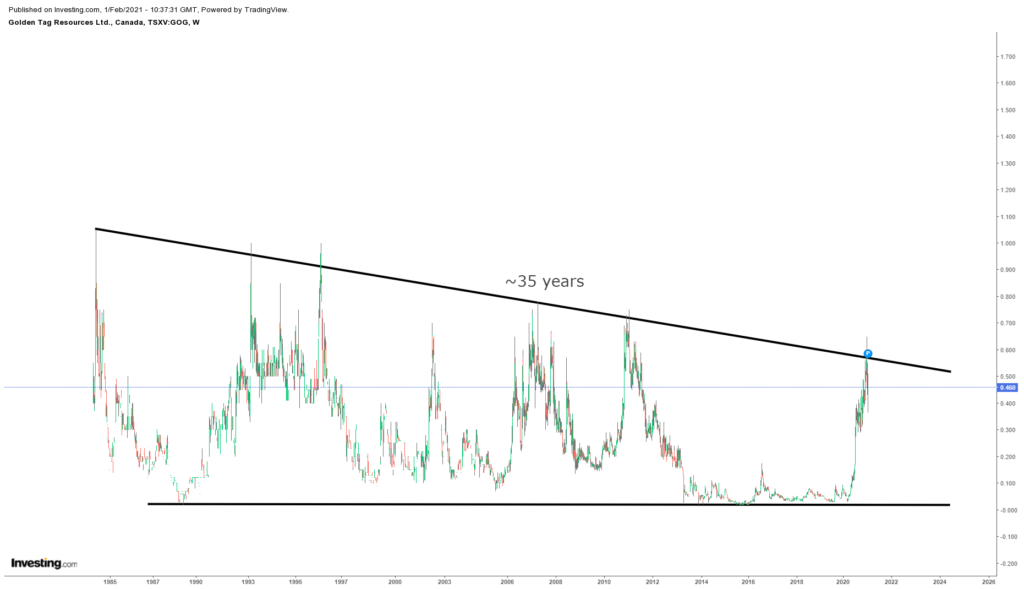 Note: This is not investment/trading advice. I am not a geologist nor am I a mining engineer. This article is speculative and I can not guarantee 100% accuracy. Junior miners can be very volatile and risky. I have bought shares of Golden Tag Resources in the open market. I can buy or sell shares at any point in time. I was not paid by any entity to write this article but the company is a passive banner sponsor of The Hedgeless Horseman. Therefore you should assume I am biased so always do your own due diligence and make up your own mind as always.