We know that almost everyone is a short term momentum trader. We know that almost no one sees shares as anything other than paper to trade. Barely anyone sees it as what it is which is a direct ownership stake in an actual company and thus part ownership of a company’s labor, infrastructure, targets, assets and any and all future potential within the company’s land package.

Imagine you would build a mining company (your portfolio) and it would be like a Berkshire Hathaway of the mining space. What would you own?

What follows is not a complete list but rather examples to help drive home the point that it is best to treat our portfolios as a conglomerate with direct investments in what are hopefully real businesses. As such one would not see stocks as just short term lottery tickets to be bought and sold depending on mood (gambling) but rather actual ownership stakes in undervalued assets with growth potential.

Metal deposits are rare but there is no doubt more discoveries will be made. What is even rarer is Real Estate (Land) because land is the only thing that we can’t discover more of.

The following companies are just some examples and not investing recommendation…

The Core – Margin of Safety and growth potential

50 Mt of Nickel, Copper and PGMs. Both assets are very advanced so they could actually get into cash flowing production and you have the team you know could actually pull it off. Magna Mining is the most advanced Nickel/Copper/PGM junior in all of North America that could start producing in 12 months time. At a rate of “only” 1,000 tpd via toll milling the resources could last for decades. 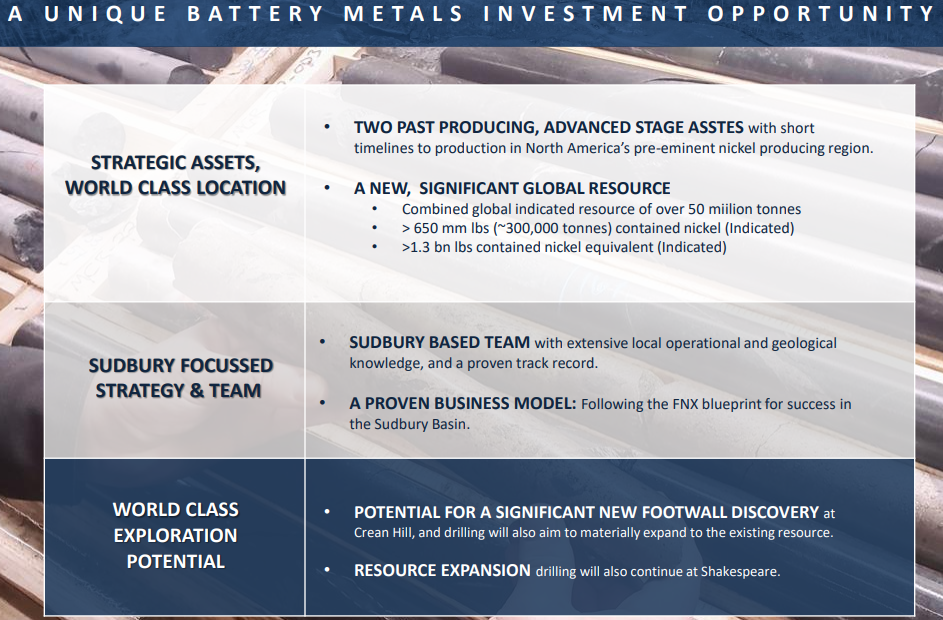 Huge asset with silver, zinc, lead and potentially a lot of TIN. You have potentially decades of large scale, possibly quite high margin production, and a big pipeline of projects. Iska Iska is likely one of the largest discoveries in recent times and could sustain a mining business for decades. Their exploration pipeline could probably keep someone busy for a few decades more. 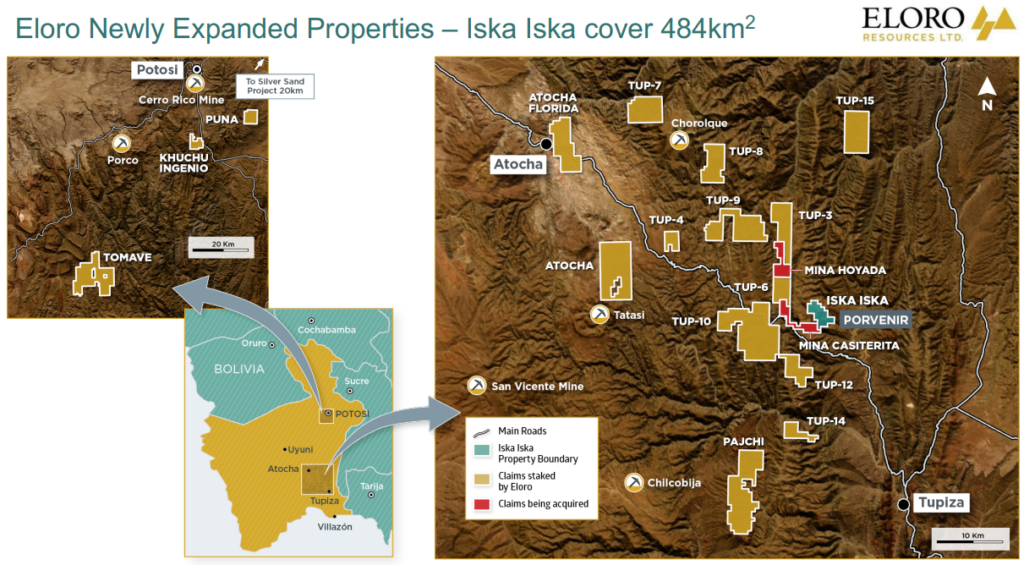 i-80 Gold – (The multi deposit, gold, silver and base metal giant in Nevada, USA)

Multiple advanced assets, near term production (cash flow), new discoveries, two mills, >10 Moz of gold, >100 Moz of silver and high grade base metal exploration in the heart of Nevada, USA. The company is already production and will be ramping up said production over the coming years while also  drilling up more ounces. 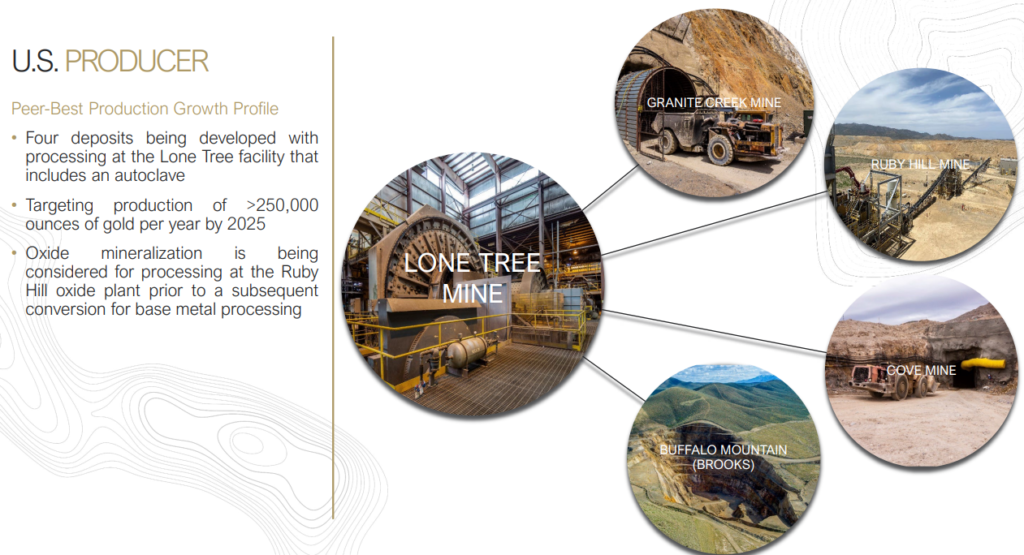 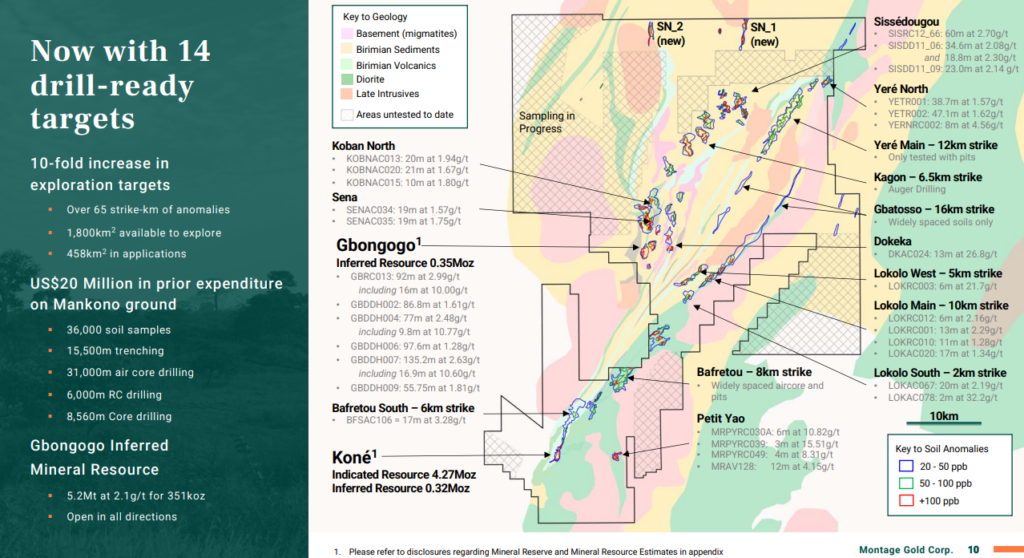 A lot of copper in the ground next to Ivanhoe Electric in Arizona. More limited than most in terms of land package but also more advanced and de-risked than most juniors. 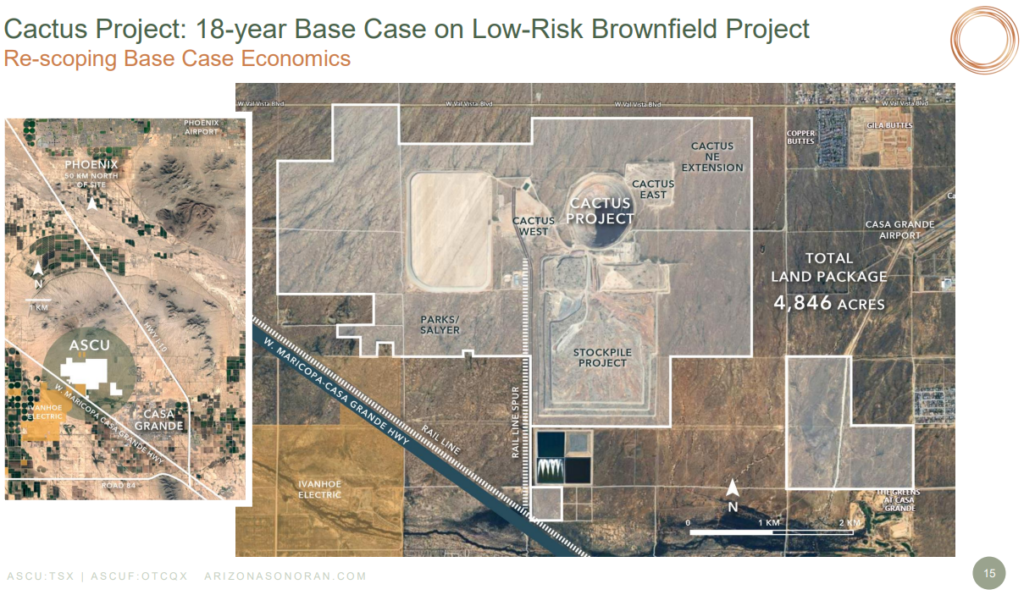 Ounces in the ground and recently had break through exploration success. Backed by Hecla. 64 Moz of silver and 1 Moz of gold in resources across seven deposits that are all open in BC, Canada. 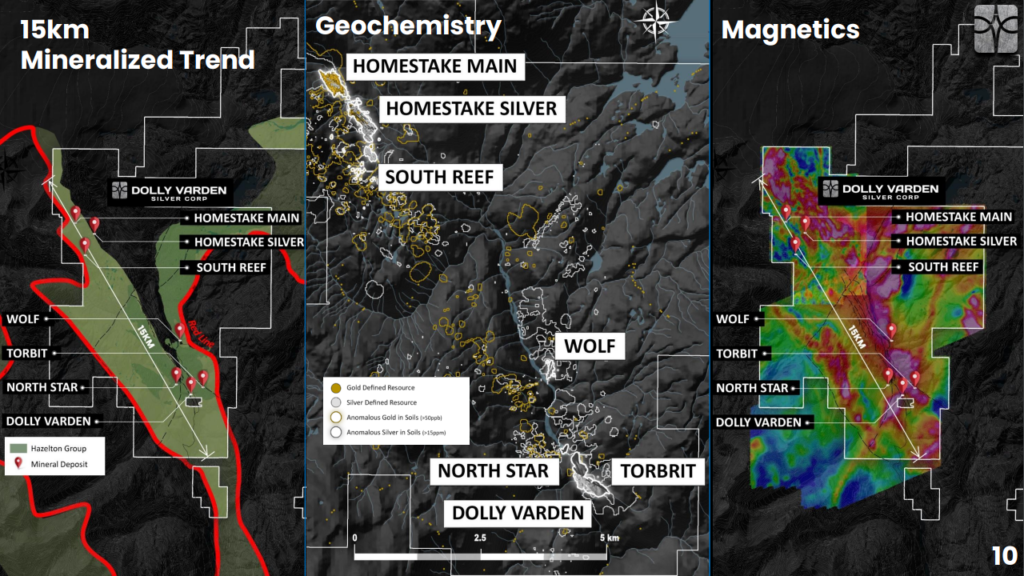 A lot of zinc in the ground with shareholders that include Teck and the Lundin family. District scale potential in Yukon, Canada. 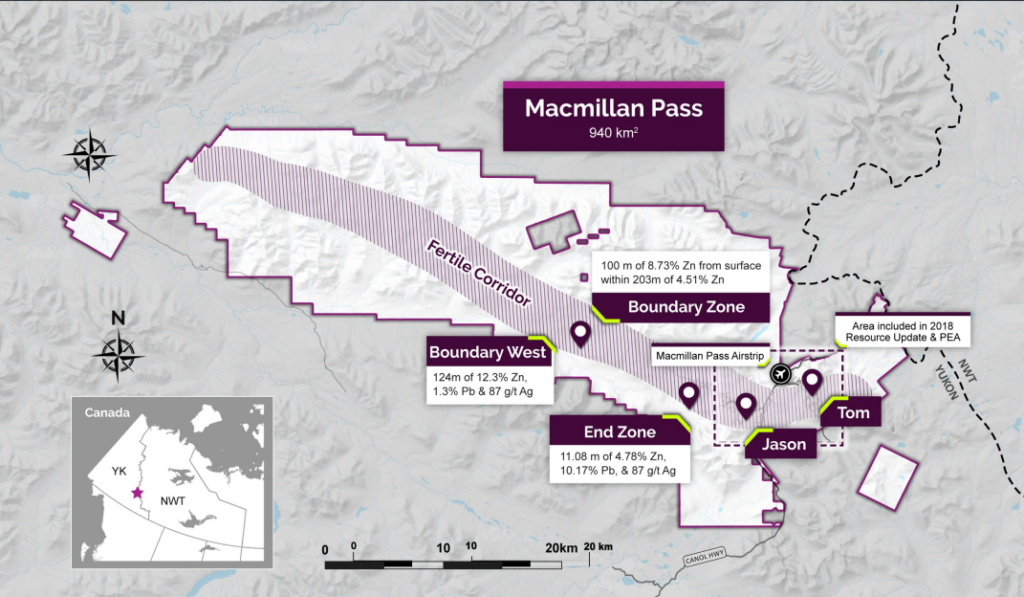 Lion One – (Gold developer in Fiji)

Advanced high-grade developer in Fiji with an ~7 km diameter caldera to explore. 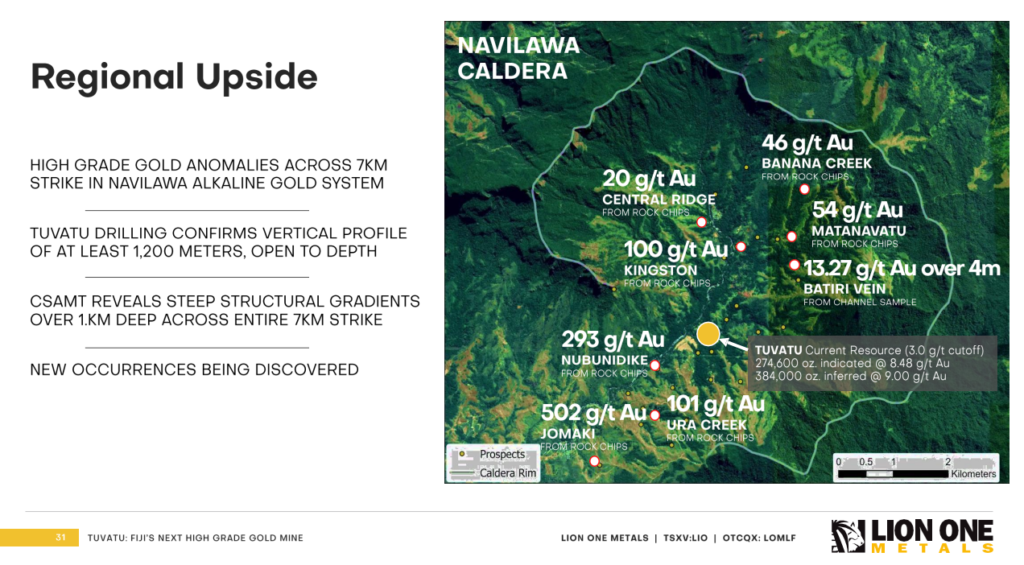 The Atlanta Gold mine mine might end up being a 1.5-2.0 Moz or more of oxide gold at good grades and the company is the third largest claim owner in Nevada. 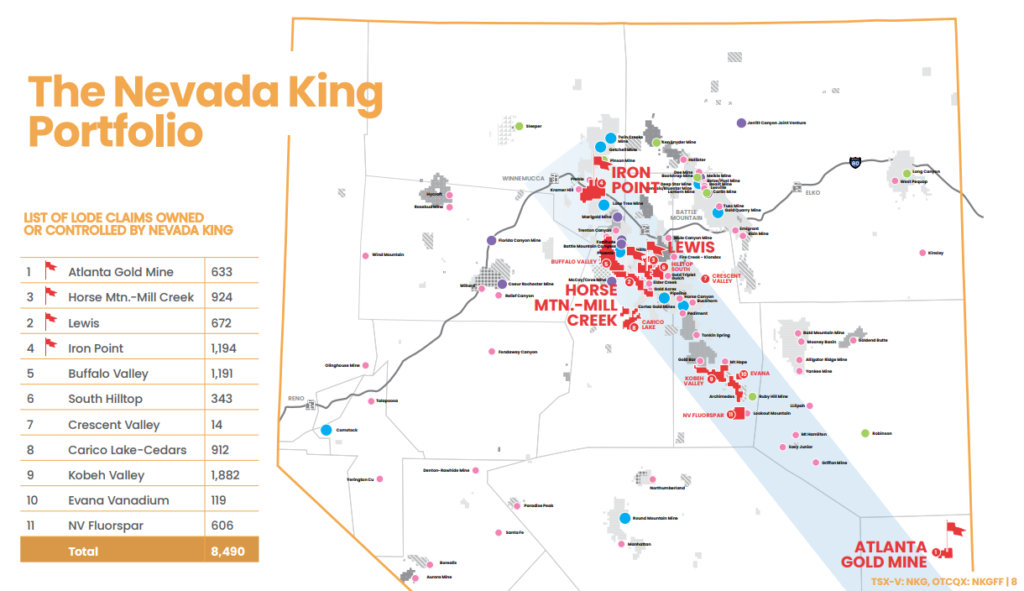 Typically earlier stage and without resources.

One of the largest claim blocks in Canada and backed by the largest mining company in the world (BHP). Gold ounces are growing rapidly at Trapper and the company has a porphyry discovery in the form of Camp Creek which attracted BHP. On top of this there are a bunch of additional targets like Metla and the company also has a JV with Ivanhoe Electric as well as additional projects like Langis (Silver, cobalt). 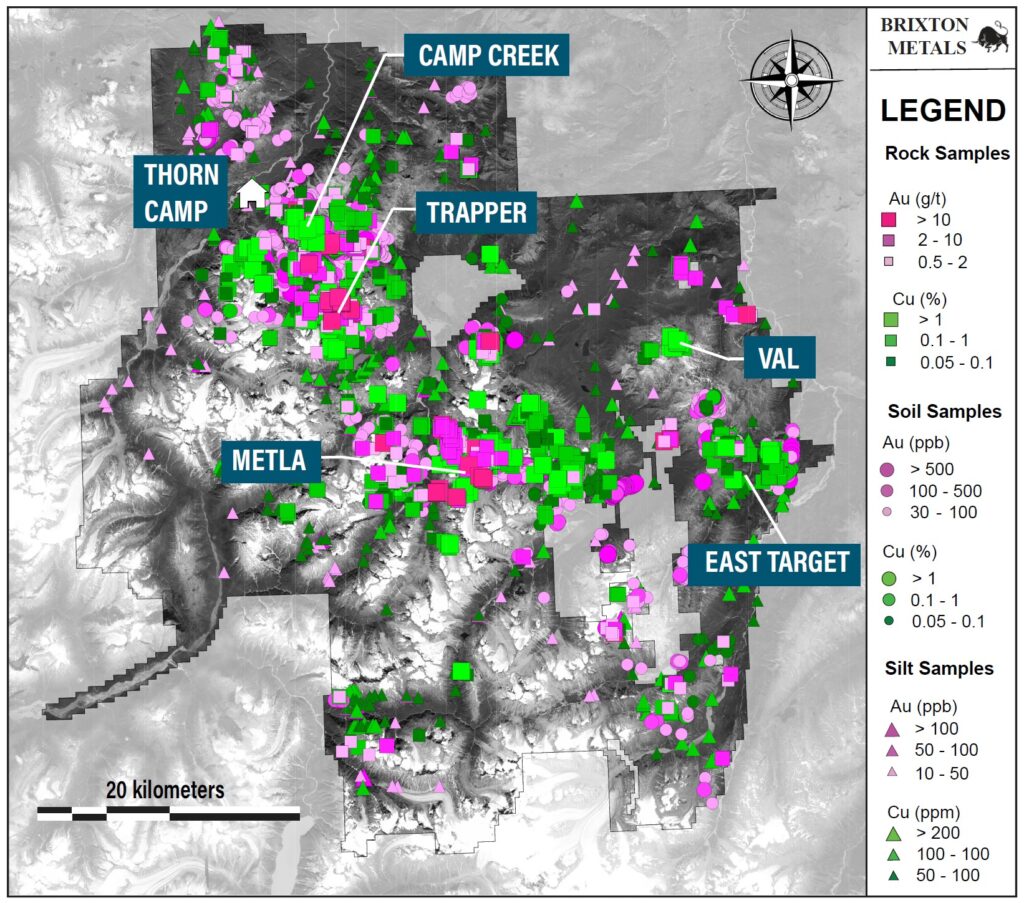 Aiming for >100 Moz of bonanza grade AgEq for next year in a district that could be very large. Hopefully this will end up being a very long lived mining district which could possibly see profitable mining decades almost regardless of metal price environment. Insiders have enormous skin in the game. 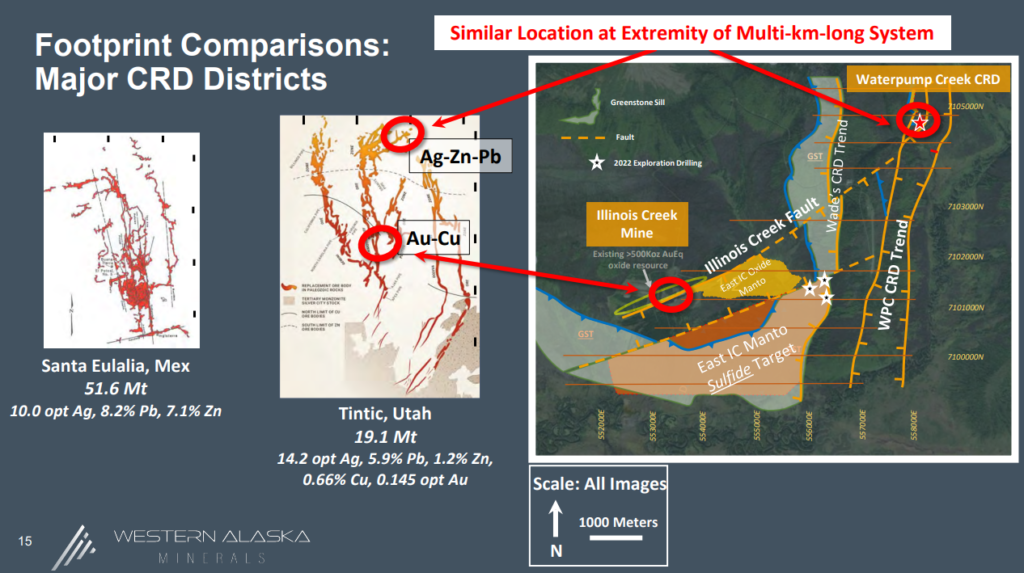 Irving Resources – (Many gold projects and backed by Newmont + Sumitomo) 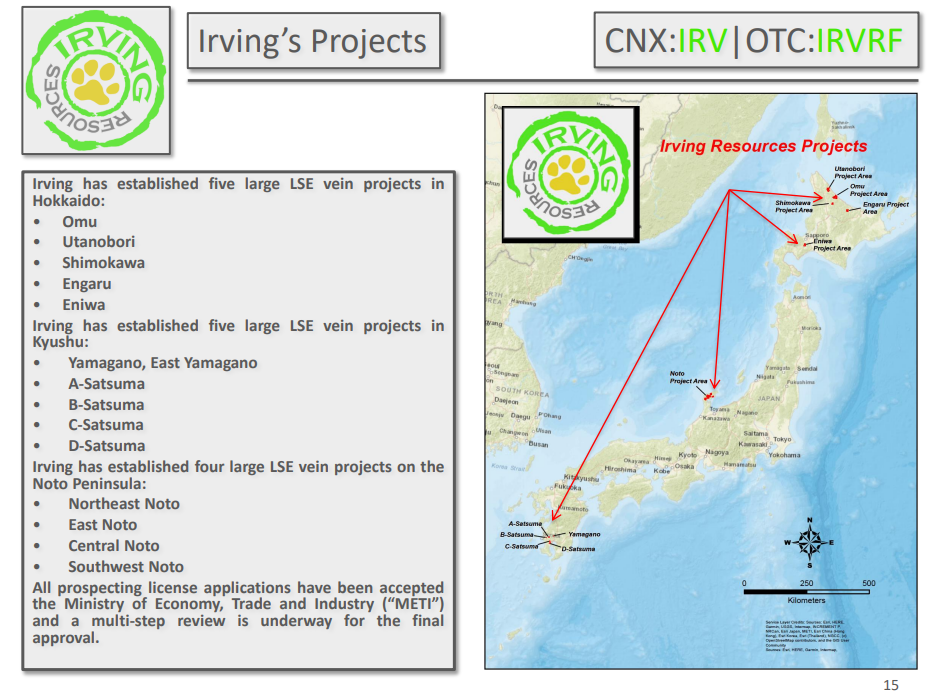 Snowline Gold – (Many gold and base metal projects in Yukon, Canada)

Two gold discoveries across one of the largest land holdings of any junior. You can see the amount of “Primary Targets” in the slide below which are marked with blue stars. 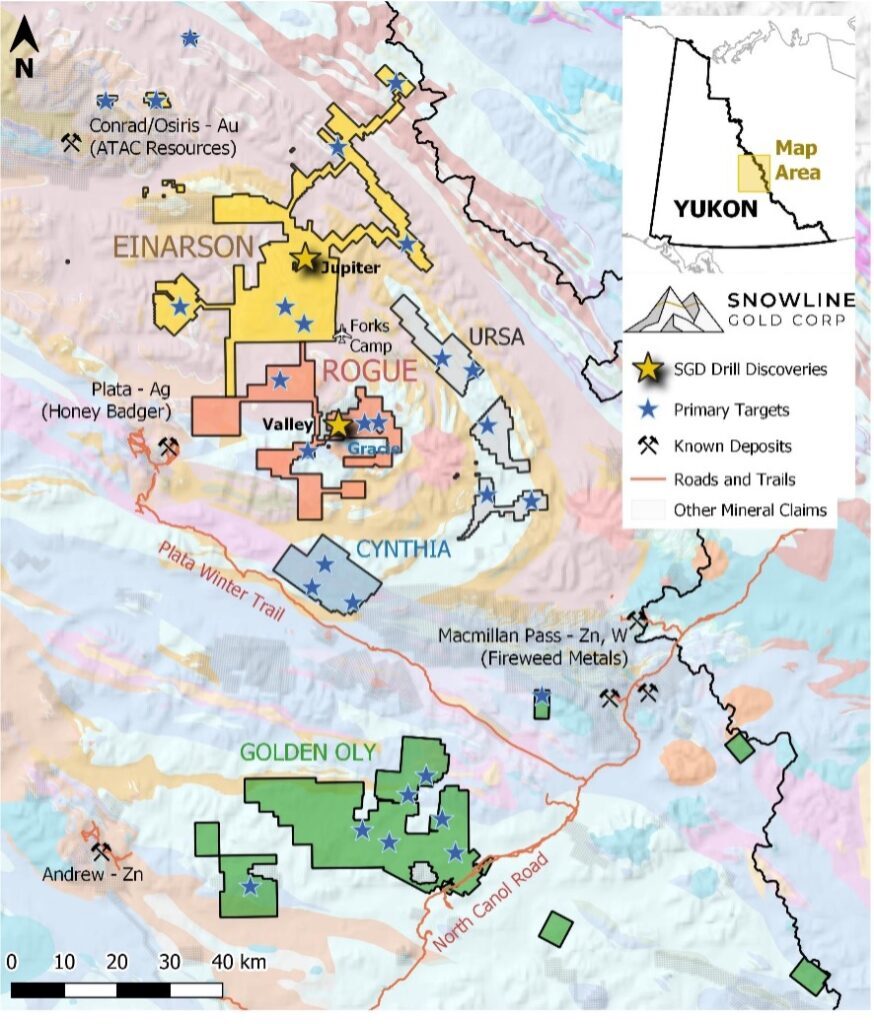 Pacific Ridge has three copper/gold projects that includes the Kliyul discovery as well as RDP which is optioned to Antofagasta. 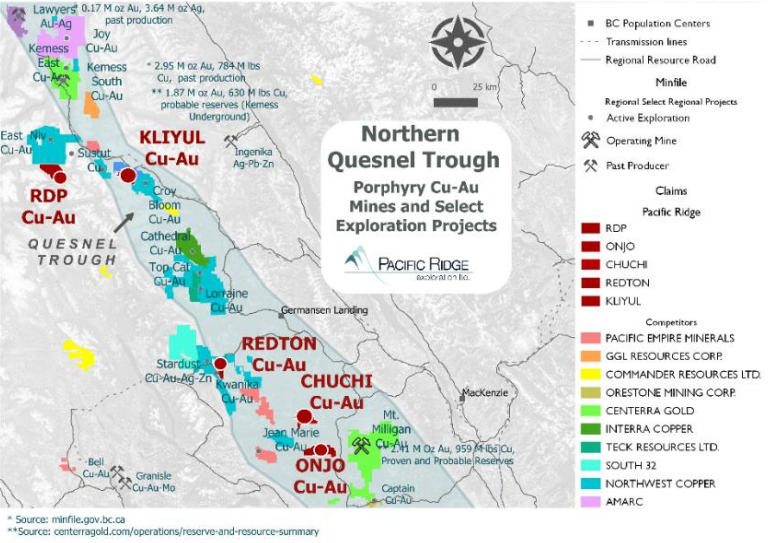 Eskay Mining – (Silver and Gold in the Eskay Creek district)

No real margin of safety but more targets than most juniors within a very large land package. 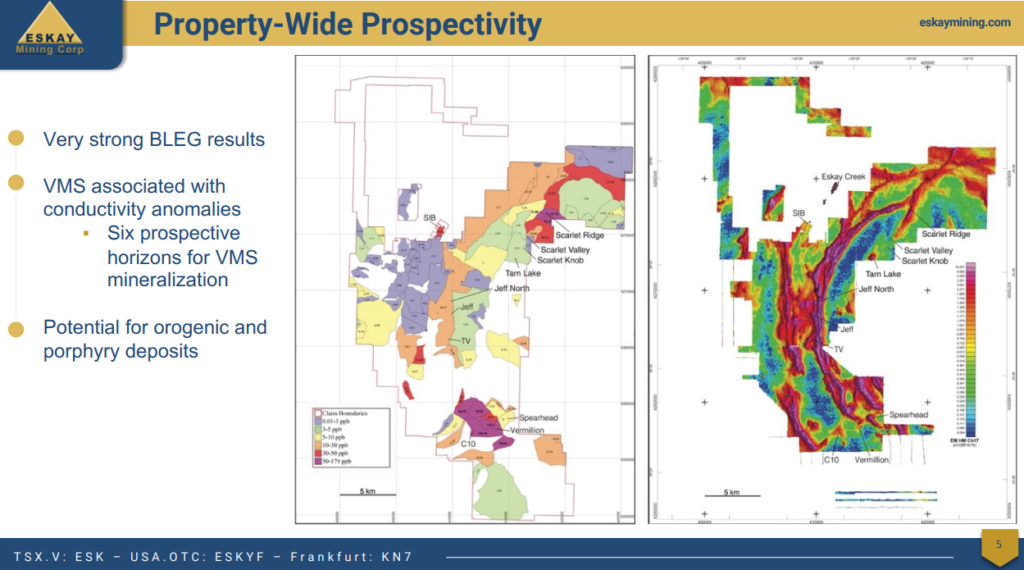 Enormous land package. Has resources and a mill on care and maintenance. Current focus is grassroot exploration with considerable cash in the bank. 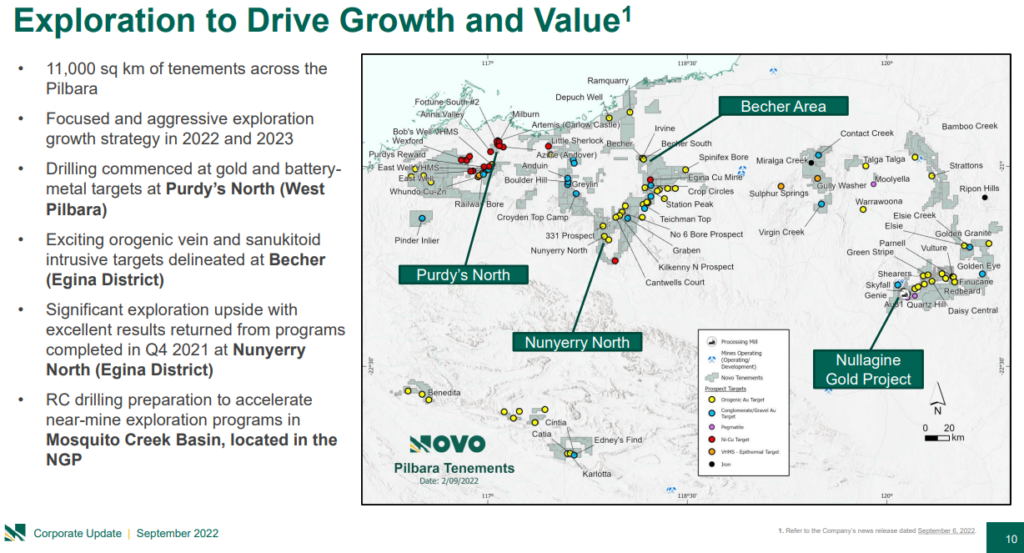 Kenorland is partnered with several majors across several projects and have 100% wholly owned projects as well. 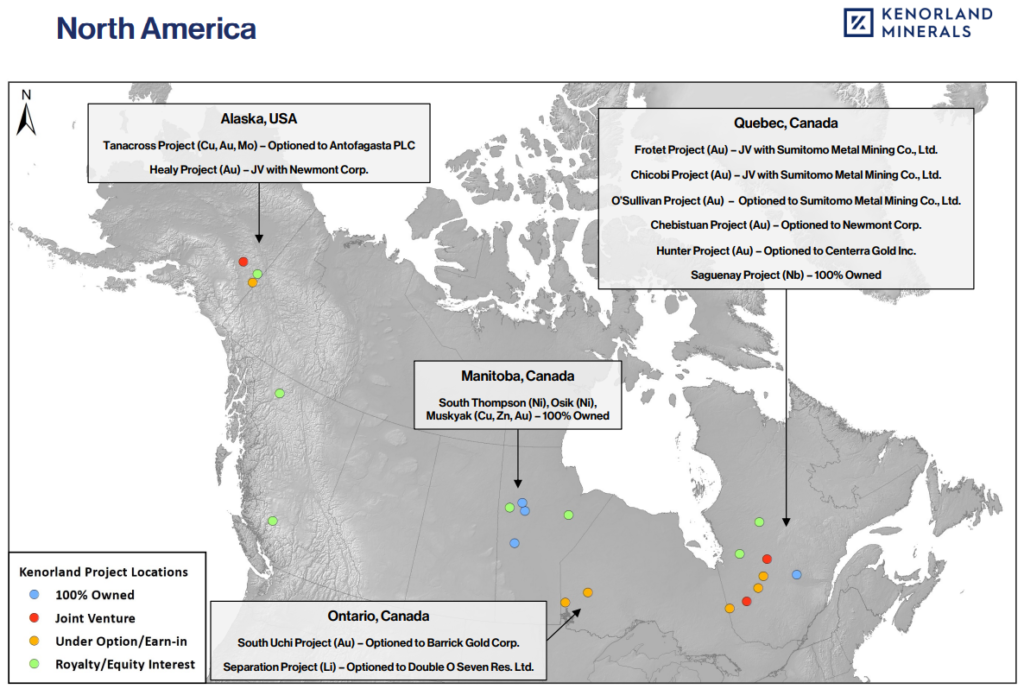 Alpha Exploration – (Gold, copper and other base metals in Etitrea)

Multiple discoveries within a very large claim block. The team is made up of serially successful orefinders. 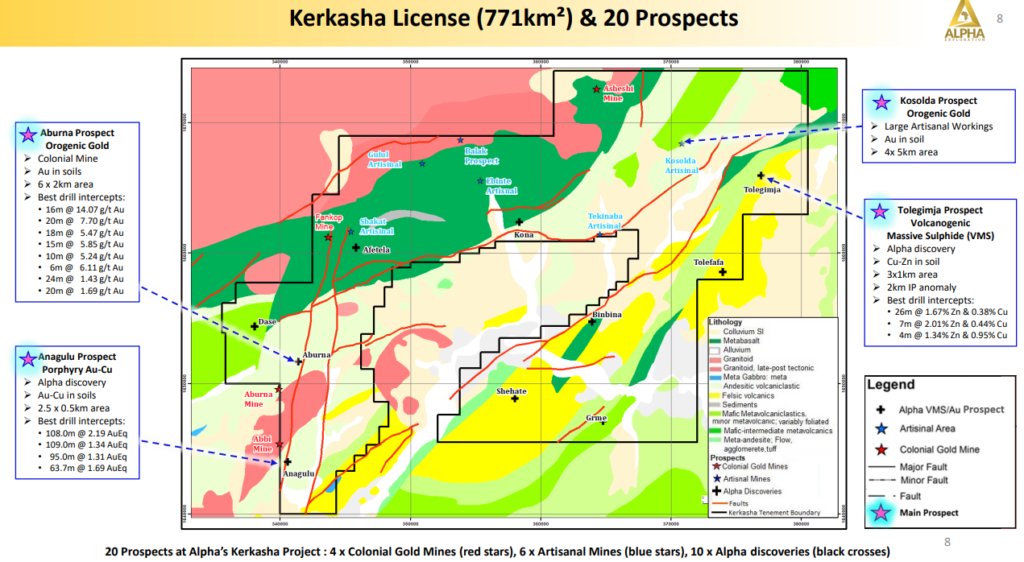 Over #11 projects in Western USA. Four of the projects have earn in deals with Newcrest Mining who is funding the exploration. The rest are 100% controlled by Headwater Gold. 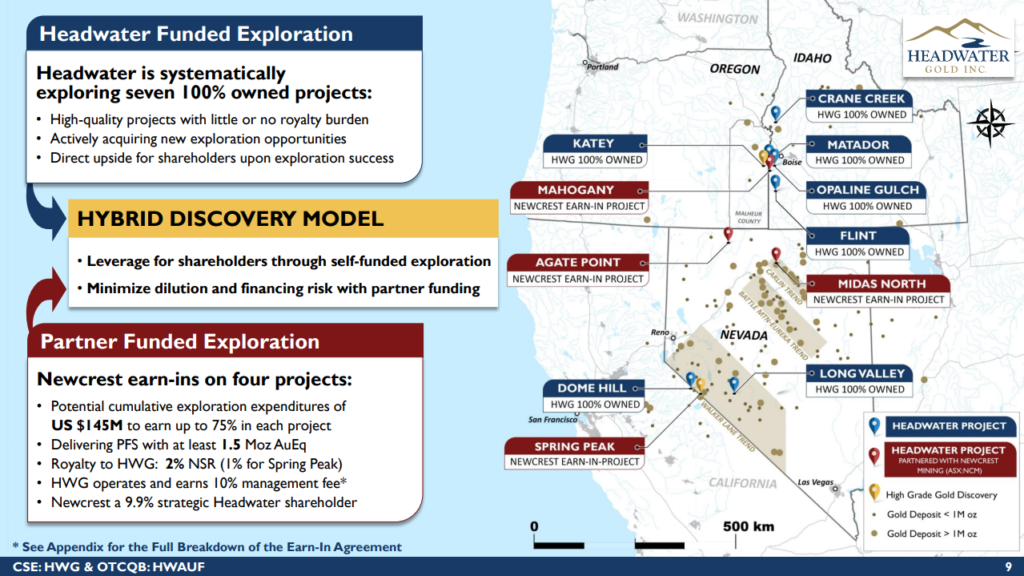 Core Assets – (Silver and base metals)

Extremely large claim block with numerous targets, with different metals, which are also confirmed by drilling. 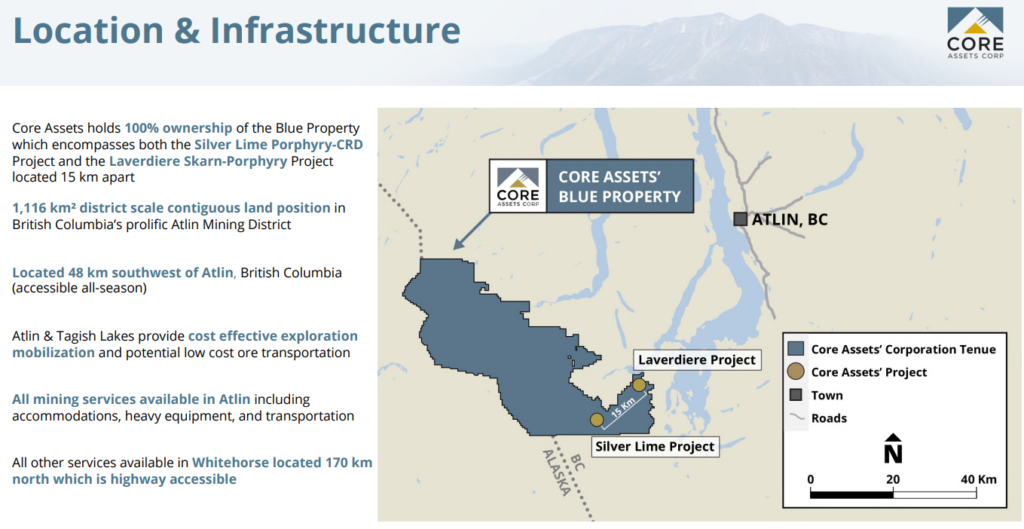 Examples of other early stage explorers with large land holdings

You don’t need to be a good trader to make money in the mining sector. You need common sense, discipline and patience. You do not need to take enormous risk to have good returns. On that note the less risky juniors have a much higher chance of becoming 5-10 baggers, than the riskiest ones, but it slowly happens over years.

Questions to ask yourself

Your company (portfolio) would be a well diversified, international mining corporation with assets all over the world, with exposure to a bunch of different metals, including some that are close to production, run by solid management teams and your company would have a pipeline of growth for the next 30 or 50 years.

Your company would have exposure to many sub sectors of the mining space where SUPPLY  is already at critical levels in many cases and where FUTURE SUPPLY therefore becomes even more important: 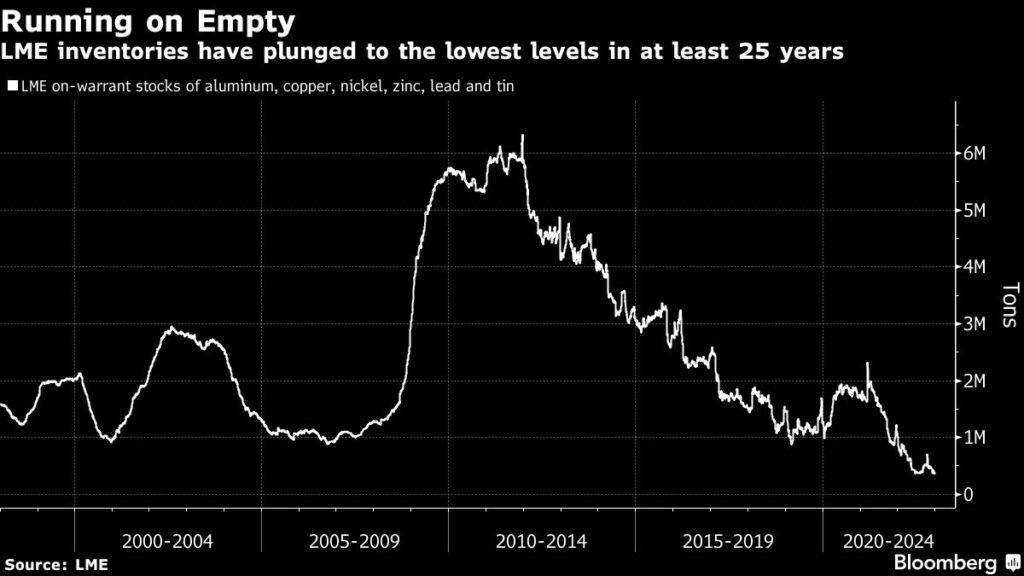 They are speaking about metal inventories for copper, zinc, lithium at the WEF today. "we are at critical stages" 🚨

In order to achieve "net zero" by 2050 copper production needs to expand by 20% PER YEAR starting now.

This has never been achieved in any decade.

Note: This is not investment advice. I own shares of most companies mentioned and some are banner sponsors. Consider me biased. Junior miners can be very risky. Never invest money you cannot afford to lose.