Metals or Miners? Silver or Gold?

Everything is relative, and the greatest opportunities for over-performance ought to be in the most unfavorable asset classes. I am a huge gold, silver and miners bull, but at any given time, the relative opportunities within that basket will differ (everything moves in cycles)…

Currently, silver is very undervalued relative to gold from a historic perspective, given that the gold/silver ratio is above 80: 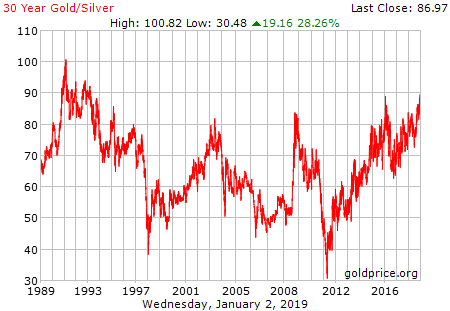 Thus, if history is any guide, the more favorable SPECULATION right now ought to be buying silver over gold. Basically it is a play on the gold/silver ratio returning to the mean (which would be silver out-performing gold in the medium to long term).

Don’t get me wrong. I prefer PHYSICAL silver over gold at the moment. BUT the thing is that I would argue that buying gold miners, or at least the gold juniors, is a better option overall at the moment. Why? Because I would argue that the silver juniors are pricing in the (crappy) price of silver, but the gold miners are not pricing in how relatively well the gold price has been doing.

For example, this is a chart of silver and a silver miners ETF (PureFunds ISE Junior Silver, SILJ): 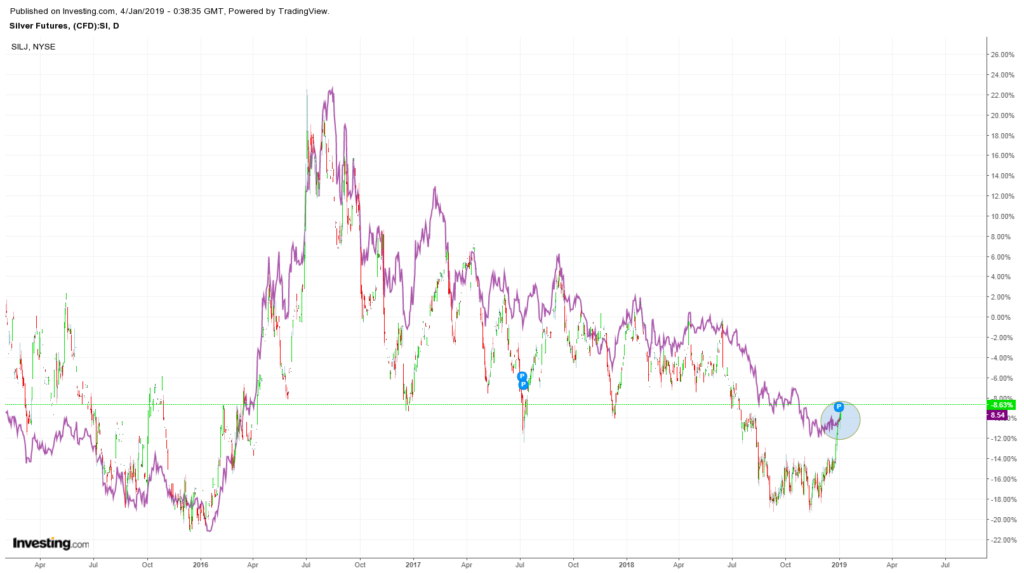 … I would argue that the silver miners are not only pricing in where the white metal is trading, but perhaps even pricing in a higher silver price than where silver is currently trading. There are very few “pure” silver miners that are producing silver at a profit at these prices. Some examples would be First Majestic, Impact Silver and Avino Silver, which are all eating up their future and equity at the moment. If you look around at the different advanced explorers/developers, you will probably find that their projects are basically worthless without silver at $20 or higher (especially since few would finance such deposits without having great margins on paper based on the prevailing silver price).

Now, lets head over to gold and gold miners…

Below is a chart with the price of gold and the GDXJ junior miners ETF:

… This chart suggests that the gold “juniors” aren’t even fully pricing in the CURRENT price of gold. Now, there are of course much more factors in play for miners than just the price of the metal, but the two charts above might still suggest that where silver miners are trading at perhaps too OPTIMISTIC levels relative to their specific metal, whereas gold miners on the other hand are perhaps trading at too PESSIMISTIC levels (all else equal). I mean, there are plenty pure gold miners who are making a buck at the moment, and there are plenty of developers with economic studies that suggest that their projects are decently- to very economic, especially with a gold price around $1,300.

In my opinion, PHYSICAL silver is a better buy than gold at the moment, mostly based on the “reversion to the mean” thesis. BUT, that is still SPECULATION. Gold miners (especially juniors) on the other hand, looks to be offering some theoretical degrees of a free lunch at the current gold price. Lastly, silver miners/juniors looks to not just be pricing in the current price of silver, but a silver price that is higher than it currently is. Thus, for many a silver miner, they would need to make quite some progress just to not be destroyers of capital. In contrast, there are quite a few gold producers/developers that could either a) continue with what they are doing, or b) sit on their hands since their projects are already economic (at least on paper).

With the above said, one can perhaps argue that the silver miners are trading at a premium due to speculation on higher silver prices going forward (probably because of the current gold/silver ratio and the mean reversion thesis). Again, this is basically a heavy speculative play given that there is often no margin of safety. Gold miners on the other hand looks to have very little speculation priced in (beta to gold), and are even trading at a discount to the current price of gold.

Basically, silver miners looks relatively crowded due to hot money wanting to hit home runs on the historically undervalued silver price. Gold miners looks cheap relative to gold due to lack of hot money (the extreme beta speculators are hanging out in silver) and an overall disgust for the sector, given how many times people have been burned over the years.

If I would rank the assets on a risk/reward AND margin of safety basis, I would put them as follows;