Gold And Silver Gets Slammed… So What?

… But why should one care?

Is the financial/monetary system and debt bubble fixed all of a sudden?

No, it’s getting worse by the day actually.

Did anything happen to your favorite junior mining companies?

As a matter of fact some even got better today…

Labrador Gold is expanding the drill campaign to 50,000 m and will hike the rig count to 4 which screams confidence.

Tombill Mines announced that the company has successfully hit the continuation of the F-zone and one of the first holes hit 13.3 m of 6.24 gpt Au.

Rokmaster put out an update on the company’s surface drill program:

John Mirko, President and CEO and Rokmaster, commented: “It is both gratifying and reassuring to note that observations of drill core from the first drill holes indicate both the Main Zone and the Yellowjacket Zones are continuing to the northwest of the current resource area.

Deep-South copper announced a negative surprise in the form of a denial of the company’s exclusive prospecting licence. As a result the stock was almost cut in half… Which means that if the company sorts out the licence then I would expect a quick 100% return to start with. If the licence does not get sorted out then well… Not much to do in that case.

… All in all the intrinsic value of my portfolio actually rose today.

Almost every junior I own is an explorer. That means that the gold will not be sold for many years and that’s when the price of gold will matter in reality. Furthermore, I pick all companies based on the internal value creation prospects, not what I think gold/silver will do tomorrow. For juniors the internal catalysts will affect the intrinsic value of the company MUCH more than the fluctuations in gold/silver…

I bought each company because I think they will go up in value regardless of what gold/silver does so why would I sell any because volatility in the metals? It makes absolutely no sense to me.

Thus, I will do what I always do: Keep buying every month and try to increase my ownership percentages in companies I like as much as possible. Cheaper shares makes that easier since I get a higher percentage of each company per dollar invested.

I have never tried to time the market or any stocks really. That means I have seen multiple 40% corrections in the last 6 years since I never sell. Still, my results have crushed the performance of GDXJ for example.

Be right and sit tight. A declining gold/silver price can’t stop the revaluation from a true discovery…

One of the best and most recent examples of why I think ALPHA investing is superior to BETA is New Found Gold. Even if one KNEW that gold was 100% going to go down quite a bit over several months, and one would have sold New Found Gold as a result, one would have missed out on a 180% return: 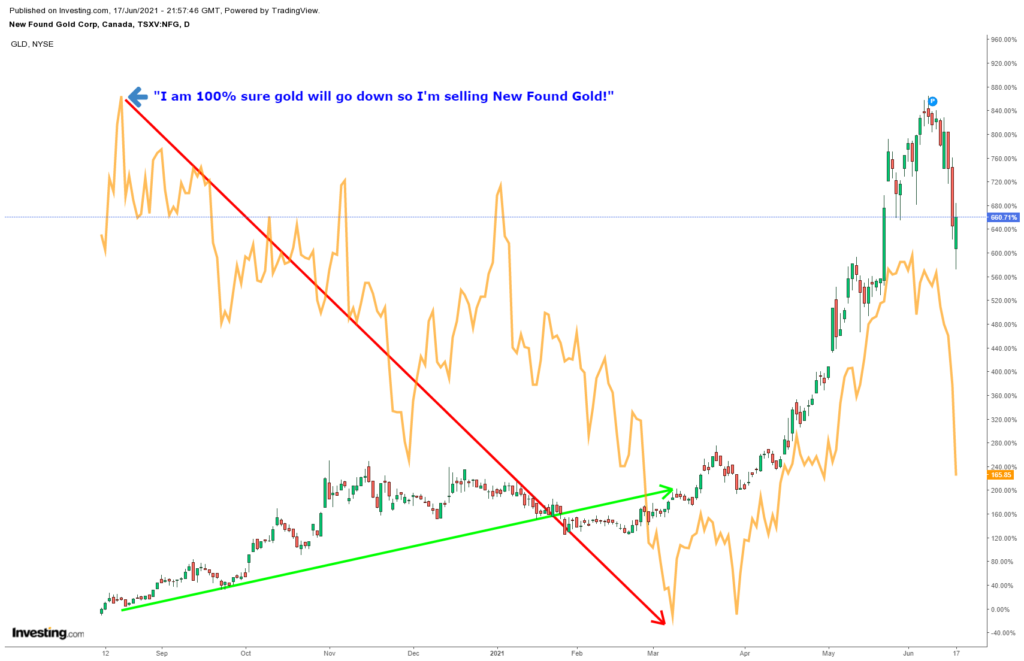 Hope for the best (assume the gold/silver bull is ON) but prepare for the worst (Pick companies like we are in a permanent bear market).

Note: This is not investment advive.

3 thoughts on “Gold And Silver Gets Slammed… So What?”