On March 15 District Metals announced the start of a 5,000 m drill campaign at Tomtebo Property:

Garrett Ainsworth, CEO of District, commented: “This is an exciting time for the Company and our shareholders as we embark on the first substantial drill program at the Tomtebo Mine in almost half a century.  The potential of the Garpenberg Mine did not get unlocked until the 1990’s, and now we are applying that knowledge and technology at Tomtebo.

Drilling will follow up, infill, and step out from significant high grade polymetallic mineralization encountered in historical drill holes, and to obtain missing assay data. Borehole electromagnetic surveys (BHEM) will be conducted on all of the holes completed, which is an important modern technology used to detect “off-hole” conductive sulphide mineralization that has never been previously carried out on the Tomtebo Property. The overall objective of this drill program will be to further establish the potential presence of a large polymetallic mineralized system that is presently daylighting at the historic Tomtebo Mine.

A total of 5,000 m of core drilling in 21 holes is planned at the historic Tomtebo Mine with a focus on the Oscarsgruvan, Steffenburgs, Gårdsgruvans, and Gamla Gruvans zones (Figure 1). Geological work carried out at the Tomtebo Mine in late-2020 identified the rock types and the hydrothermal alteration patterns that hosts the copper-gold and silver-zinc-lead mineralization.  The interpretation of this work has formed the basis upon which priority drill targets were selected. 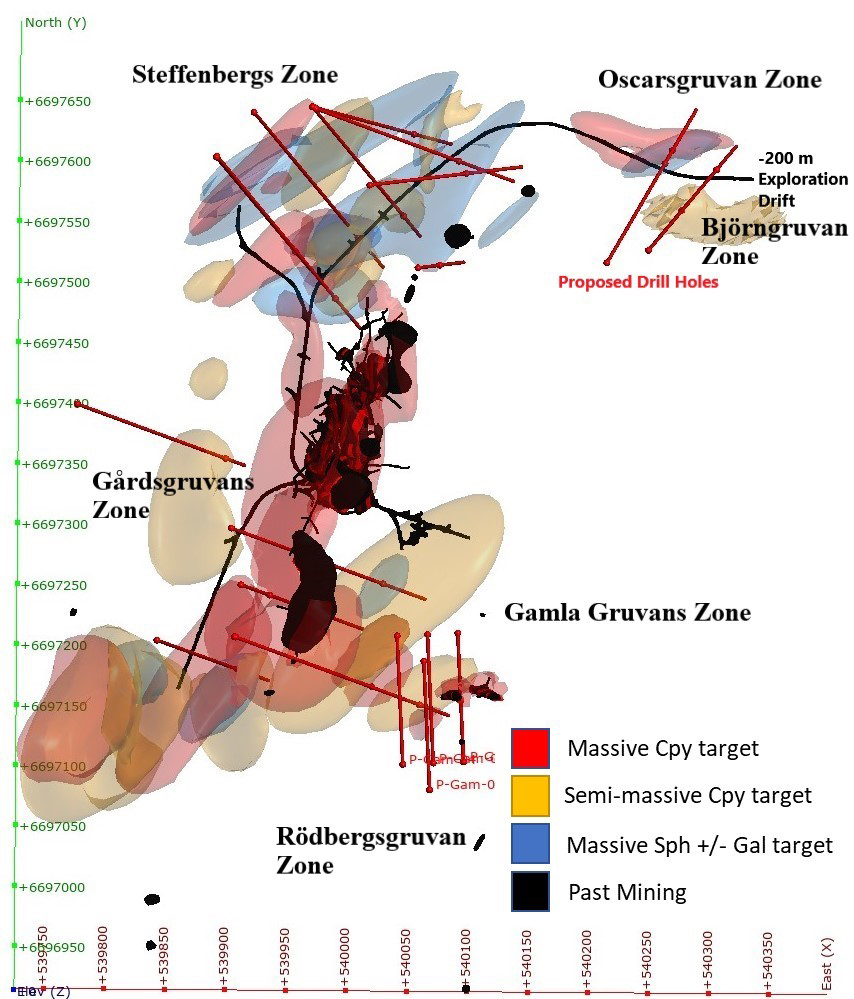 The next slide highlights the obvious exploration potential very well. The historic hits and and the exploration drift suggests there is a lot of “low hanging fruit” in the Oscarsgruvan Zone: 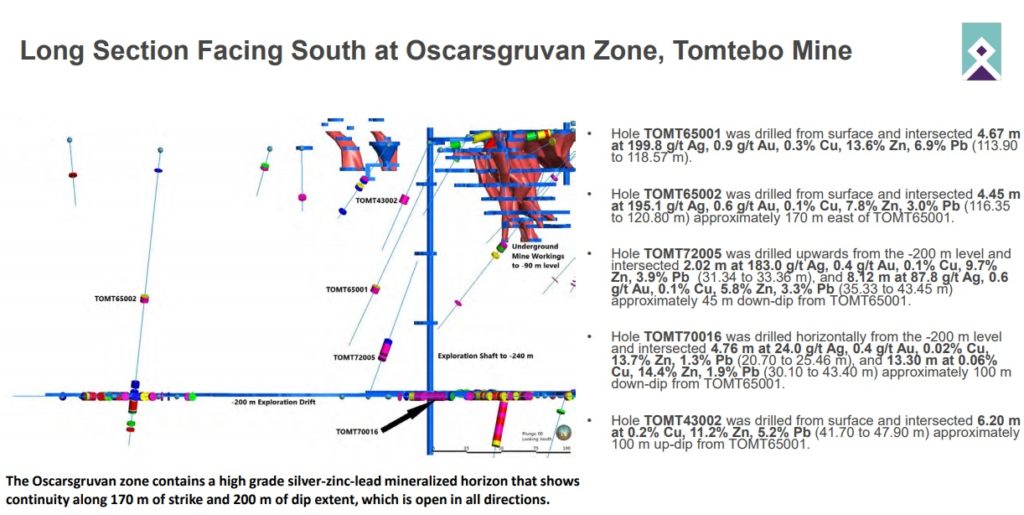 I would highly recommend watchin this segment below where CEO & President Garrett Ainsworth spells out all the, in my opinion, high probability exploration potential across in multiple zones:

…  In short, this is a (relatively) high probability drill campaign. Remember, Tomtebo was actually planned to go into (“modern”) production a few decades ago, before Stora (Swedish company) decided to get out of mining. Since then the project has been literally untouched. I should also note that there has actually been historic production at Tomtebo dating back several hundreds of years: 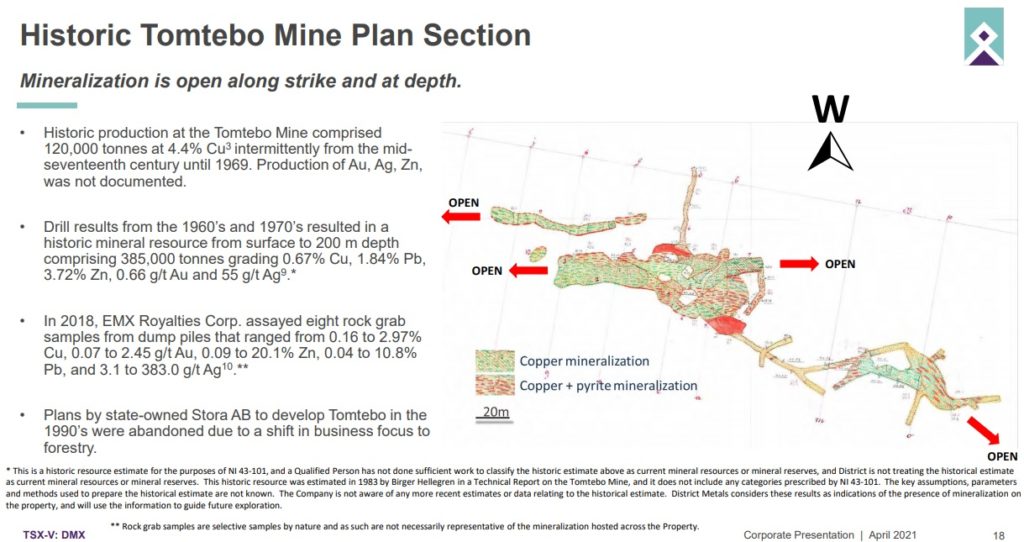 The asset is located in a part of Sweden which is very famous for having some of the best VMS, SedEx and CRD deposits in the world. The best example might be The Garpenberg mine which is owned and operated by Boliden: 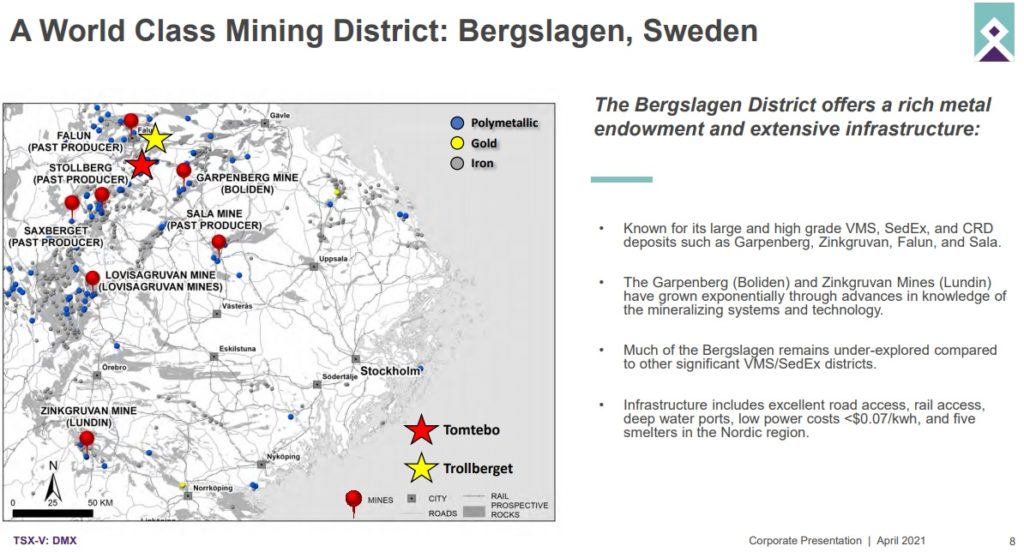 The Garpenberg mine is only 25 km away from Tomtebo and is a world class mine: 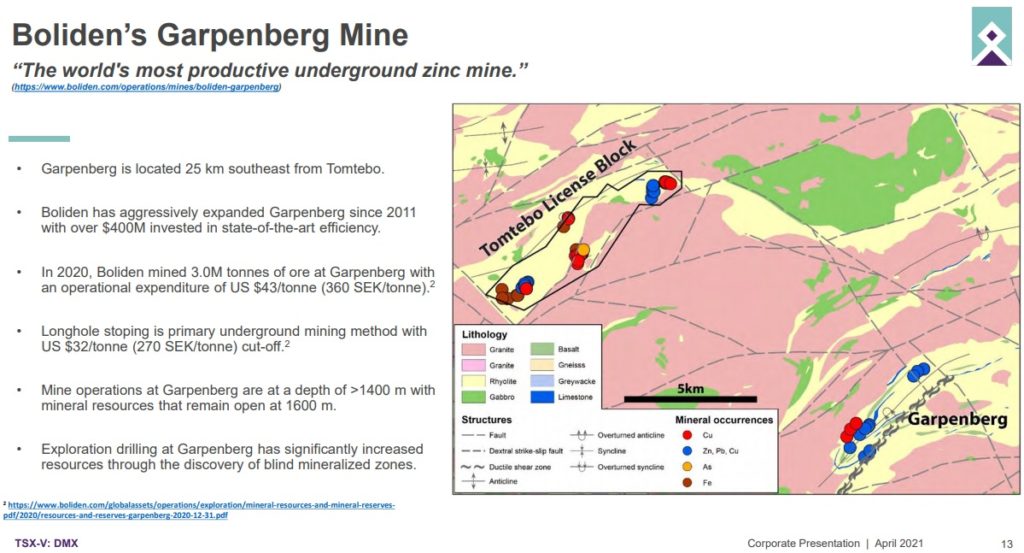 …Note the operational expenditure and cut-off value for Garpenberg(!).

Lets do some crude examples to show how impressive this mine is:

With the price of zinc currently being around US$1.1/lb the cut-off grade would be less than 1.4% ZincEQ and the operational expenditure per tonne would equal an in situ value of around 1.8% ZincEQ (assuming 100% recoveries!). If one prefers to think in terms of silver equivalent it would translate to about 40 gpt AgEQ for the cut-off grade and 53 gpt AgEQ to cover the operation expenditures (assuming a silver price of $25/oz). (Ps. Do your own calculations just to be sure).

And the remarkable thing is that the mining is taking place at a depth of over 1,400 m(!)…

In short, this is an extremely good operation with very low costs, which means that the threshold for success in terms of grade etc is very forgiving. I think this fact in terms of just how extremely good a mining operation can be in this part of Sweden is something that the market is greatly underappreciating when it comes to District Metals.

In light of the numbers presented above it is easy to see how man of the historic hits could potentially lead to some very economic mining: 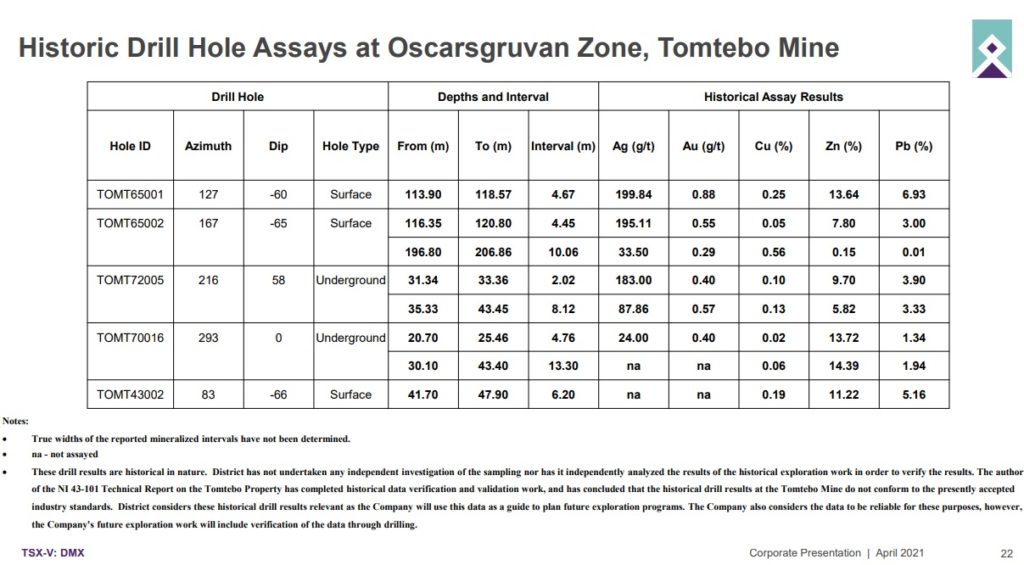 … The 10.06 m interval in hole TOMT65002, which is the LOWEST grade intercept in the table above, roughly translates to an in situ metals value of around US$91.37/tonne for example. And if the operating costs would be even close to the Garpenberg operation then… Well you get the picture ($$$). The other intercepts show grades that are multiples of what was intersected in hole TOMT65002 and could really be disgustingly economic(!).

As could be seen in a previous slide there is actually a historic mineral resource at Tomtebo already which was based on limited drilling done in the 1960’s and 1970’s:

An approximate gross metals value per tonne of that shallow resource is US$232/tonne. Now if we play around for a bit and just subtract the operating costs shown in the Garpenberg operation we can try to gauge the operating profit potential of said resource…

Note that this is obviously not the true NPV of the historic resource but rather an exercise to show just how valuable a deposit of this type can be in this part of Sweden.

They say a picture speaks more than a thousand words… 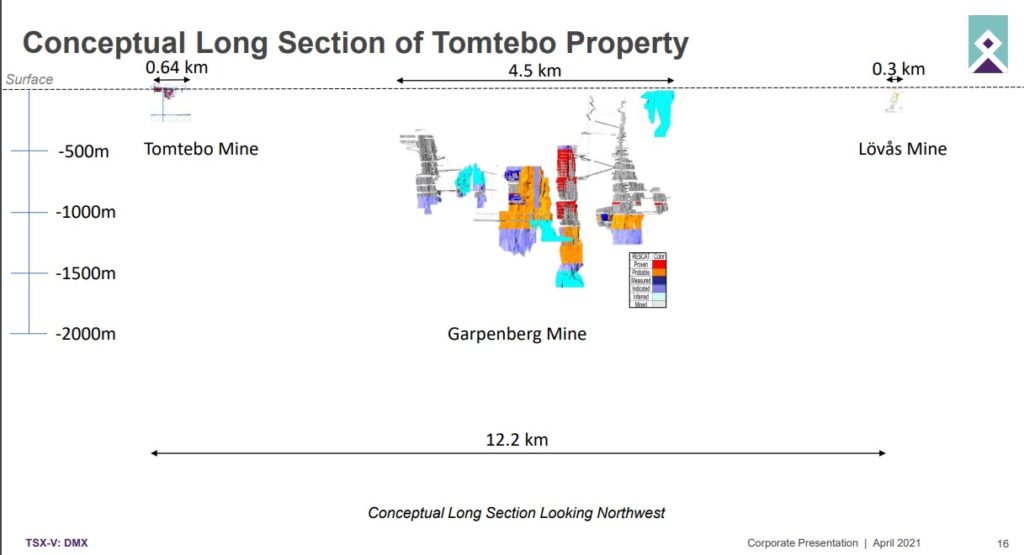 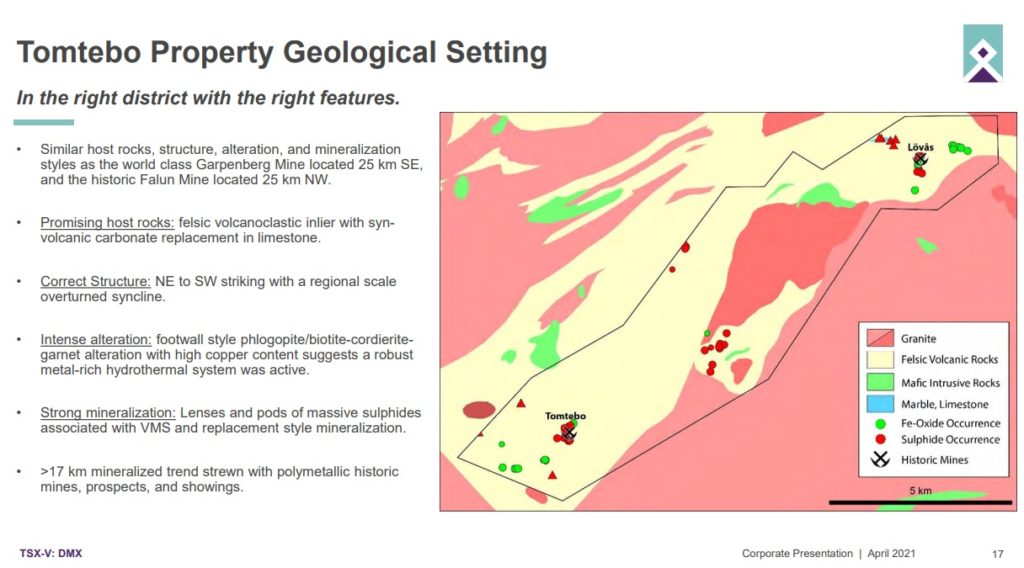 On March 31 the company releases a news release titled “District Reports on Significant Gravity High Anomalies at The Tomtebo Propert”. The gravity suvery was limited to the Tomtebo mine trend as per the slide below: 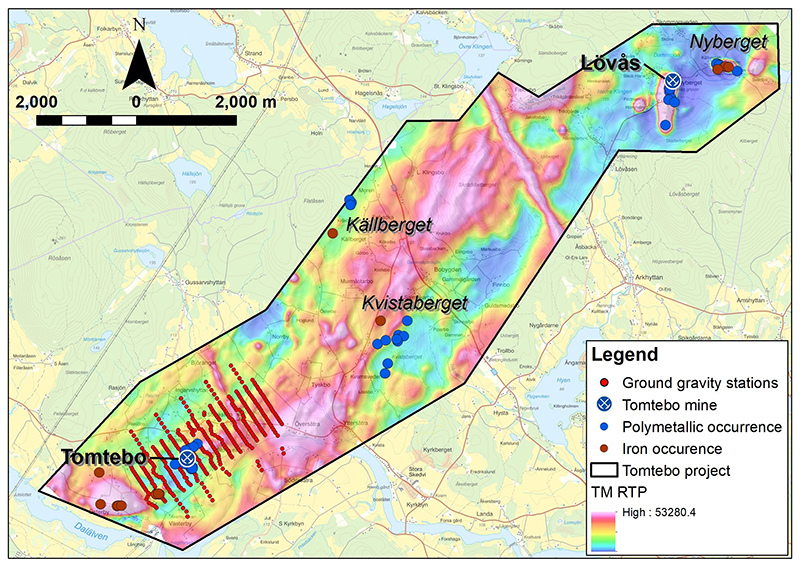 And even though the survey “only” covered the Tomtebo area the results and conclusions drawn sure are interesting: 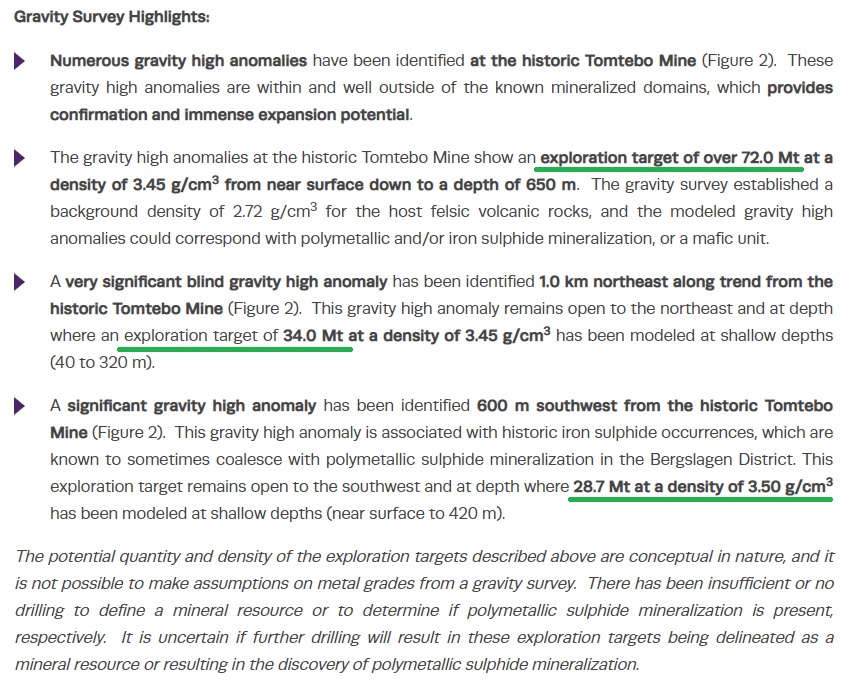 The combined tonnage of just these theoretical exploration targets is 134.7 Mt. For reference the combined P&P, M&I and Inferred resources for Garpenberg stood at 151.6 Mt as of December 31, 2019: 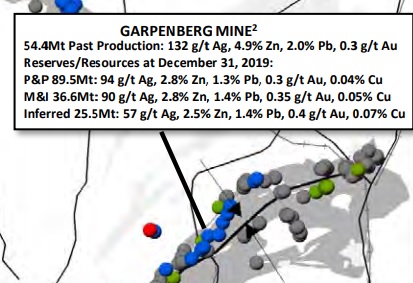 Furthermore I think a theoretical exploration of 134.7 Mt in the south-west corner of the total Tomtebo project is quite exciting given that the theoretical operating profit potential from 0.38 Mt was shown to be US$71,820,000 in the crude math exercise done earlier in the article.

The Natural Buyer: Boliden, The US$11 B Giant

Who would get the most value out of a deposit(s) of this type in this location? Boliden would be the natural candidate, given it’s crown jewel is the Garpenberg mine, which is almost right next door. In other words the entity which could probably squeeze the most value out of a big discovery at Tomtebo (Synergies, operational experience & know how etc), and therefore would be willing to pay the most for it, is our neighbor. This is a favorable strategic situation that few juniors find themselves in.

Oh and on April 14 the company announced the following:

Rodney Allen, BSc, PhD of Volcanic Resources has been appointed as Technical Advisor to the Company. Dr. Allen was Manager, Geology Research and Development for the Boliden Group in Sweden for ten years. Prior to that position, he studied several polymetallic ore deposits in Sweden. His geological interpretations were instrumental in the discovery of new ore bodies at Garpenberg and Renström.

Garrett Ainsworth, CEO of District, commented: “We are very pleased with the progression of our maiden drill program at Tomtebo. Our technical team and drill crew in the field are firing on all cylinders, which has resulted in optimized production from the drill rig with best practices being carried out with regards to health, safety, and the environment. We are very excited to receive assay results from our first three drill holes next month.

The official appointment of Rodney Allen as a Technical Advisor for District Metals is a natural fit. Rodney is an important addition to the technical team given his depth of highly relevant experience at Boliden’s Garpenberg Mine, and elsewhere in Sweden. Between Rodney and our Country Manager, Hein Raat, the Company is fully equipped to unlock the potential at Tomtebo.”

Firstly, I think that the current drill campaign has a relatively high probability of success.

Secondly, I think the market does not fully realize just how low the theoretical cut-off grade might be in light of how low the operating costs are at the nearby Garpenberg mine. What I mean by this is that the threshold for success ought to be lower and a given level of success in terms of a given grade ought to have more economic value compared to the run of the mill exploration campaign. In other words I see exploration success as both LIKELY and having an above average VALUE.

Thirdly, I think there are some shares becoming free trading soon so the current (IMO) bargain might be a bit “artificial”.

Fourthly, the chart looks quite promising… 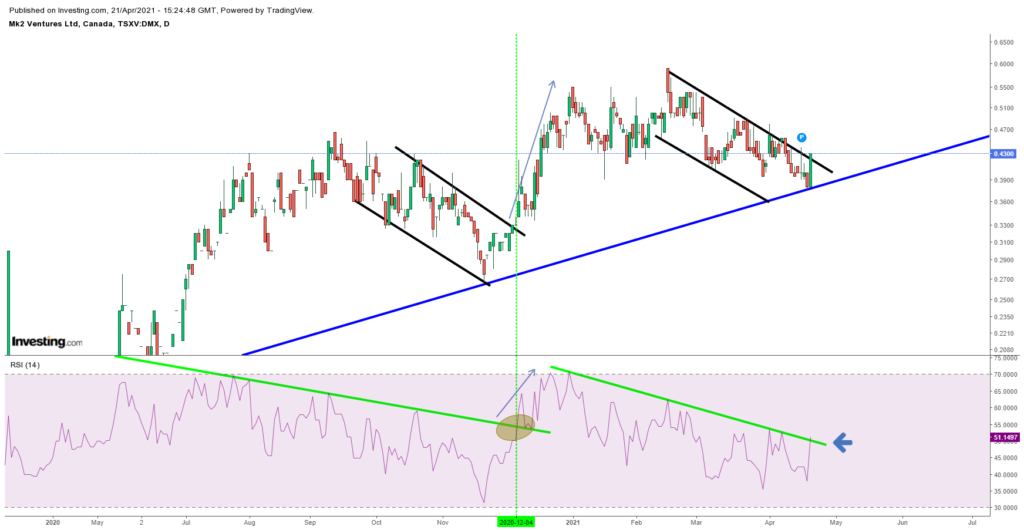 Note: This is not investing or trading advice. I own shares of District Metals and the company is a passive banner sponsor. Always do your own due diligence and make up your own mind. I cannot guarantee the accuracy of the information in this article.

Erik Wetterling aka The Hedgeless Horseman

One thought on “District Metals (DMX.V): Market Underestimates The Quality of Tomtebo”