Defense Metals (DEFN.V) is my only holding which is involved in the Rare Earth Elements (REE) space. Since I know very little about said elements my short case for Defense Metals is as simple as it can get and was primarily based on “reading between the lines” and the low valuation:

Defense Metals looks like a possible “no brainer” from a risk/reward perspective due to several factors. Firstly, the company has an advanced Rare Earth Elements (“REE”) project in a tier 1 jurisdictions. Secondly, there is simply not many of these projects around in a time when demand looks to be soaring and supply is “uncertain” to put it mildly. Demand for REEs comes from the electric power industry and green energy technologies as per the company. Where it gets even more interesting is the fact that REEs have significant military and national security applications. On that note there was recently an article titled “China may ban rare earth technology exports on security concerns“ and it stated that:

While China has no plans to restrict shipments of rare earths to the U.S., it is keeping the plan in its back pocket should a trade war break out again, the person said.

And how about this article from The Economist dated April 3, 2021, titled “Governments have identified commodities essential to economic and military security” which stated:

Cut deep into the desert rock of southern California are the jagged tiers of an open-pit mine. Mountain Pass is North America’s only mine of rare-earth metals, used in everything from fighter jets to the drive-trains of electric cars. In 2015 Mountain Pass shut, unable to compete with rare-earth producers in China.

… As the world gets more chaotic, and geopolitical tensions rise, one would expect that nations get more and more focused on securing a supply source closer at home. In other words the it seems that not only is demand for Rare Earth Metals increasing OVERALL but nations that does not have much in terms of sources of supply themselves (any country except China basically) will want to secure “local” supply.

Defense Metals is uniquely positioned to take full advantage of the current state of world affairs through its well advanced Wicheeda REE deposit as per the company: 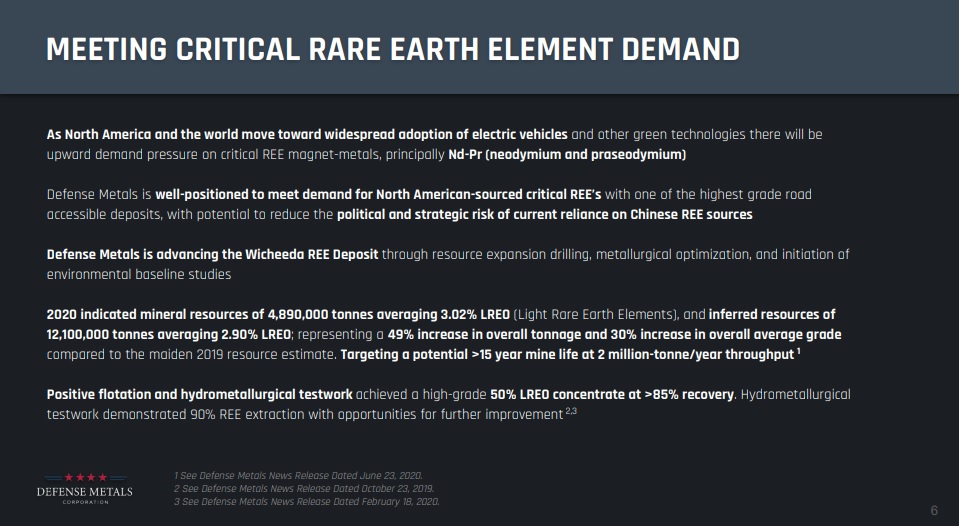 The project is located in the mining friendly, tier #1 jurisdiction that is British Columbia, Canada. It’s close to Highway 97, a major hydroelectric power line, major gas pipeline and even a Canadian National railway: 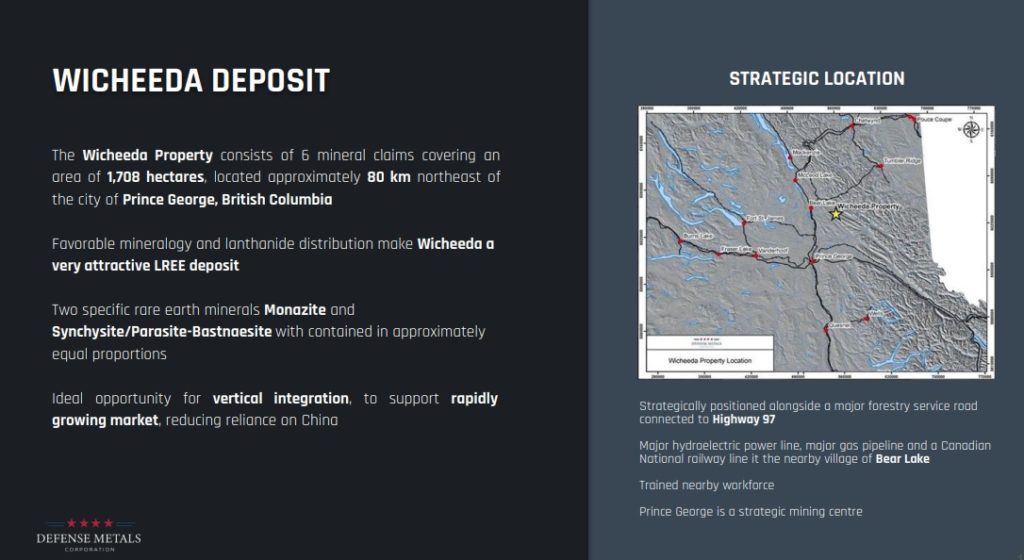 If that wasn’t enough, the deposit itself appears to be wide open with some areas that clearly looks to have pretty probable growth potential:

“The 2019 Wicheeda REE Deposit drill campaign continues to yield exceptional results. With WI19-31 we have cut the highest grade drill intercept to date on the Project. The results are particularly significant given that WI19-31 occurs at the north end of the Wicheeda Deposit in an area where no prior drilling has been completed. This drill result, in addition to those from previously released holes; clearly illustrates the potential to expand the Wicheeda REE deposit” 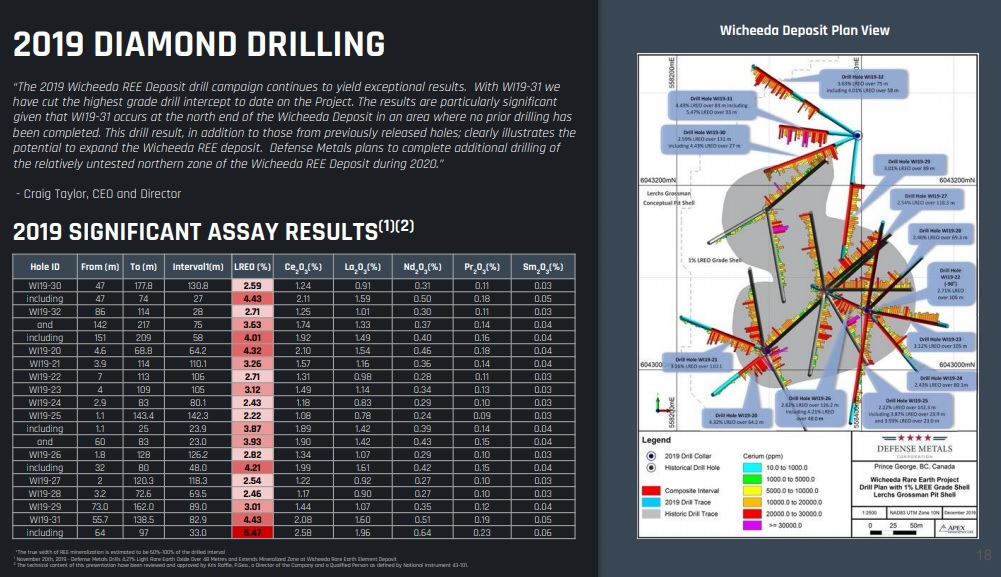 So, Who Cares About All This?

If the macro trend assumptions discussed earlier are correct, coupled with the apparent quality of the project, then one might expect to see some external parties taking an interest in Defense Metals, right(?). Well look no farther than some of the many headlines that the company has pumped out lately;

Defense Metals Corp. (“Defense Metals”) (TSX-V:DEFN / OTCQB:DFMTF / FSE:35D) is pleased to announce that it has recently been notified by Welsbach Holdings Pte Ltd. (“Welsbach“) that is has received requests from two interested third-part Rare Earth Element (REE) processors for samples of high-grade REE mineral concentrate for the purposes of evaluation prior to entering discussions with respect to the negotiation of an initial memorandum of understanding (MOU) and subsequent potential mineral concentrate offtake agreements.

Furthermore we got these comments from Defense Metals and Welsbach itself:

… Highly encouraging for sure. But wait. It gets better. Not even a month later we got the following news release…

Defense Metals Corp. (“Defense Metals”) (TSX-V:DEFN / OTCQB:DFMTF / FSE:35D) is pleased to announce that it has recently been notified by its Asian based advisor Golden Dragon Capital Limited (“GDC“) that is has received requests from two leading global Rare Earth Element (REE) smelting and separator enterprises to provide samples of Wicheeda REE mineral concentrate for the purposes of evaluation prior to entering discussions with respect to the negotiation of an initial memorandum of understanding (MOU) and subsequent potential mineral concentrate offtake agreements. These requests represent the third and fourth REE concentrate evaluation requests received by the Company to date, and discussions are currently ongoing with several other parties.

Furthermore we got these comments from Craig Taylor, CEO of Defense Metals:

… Does a Market Cap of C$24 M sound right in light of the above? To me it sounds like a case with an irrationally favorable Risk/Reward equation.

What is Defense Metals Worth?

I sure don’t know but I have read Bob Moriarty’s piece from 2019 which states:

If you ignore the facts surrounding the drill hole there is another way of determining if it is cheap or if it is expensive is to look at the June 2019 43-101 that showed 11.37 million tonnes at an average grade of 1.96%. One percent LREOs is worth about $121 USD. That’s an in the ground value. The only purpose is to show value and to compare drill holes to something we do understand, like the price of gold.

If you accept $121 being the value of 1% LREOs and you do the math, you will realize their old 43-101 showed a gross metal value in the ground of just short of $2.7 billion USD. The entire market cap of DEFN today, after brilliant drill results, is less than 1/10th of 1% of that. I’d call that pretty cheap.

Defense Metals is a permanent call on the value of REOs. I don’t see any way it could get much cheaper. We are in Tax Loss Silly Season and if investors ever wake up to what DEFN has already, the sky is the limit.

If we use the the same value assumptions as Bob then the in ground value today would be somewhere around $6.2 B assuming my math is correct. $6.2 B in gross value is equivalent to a gold deposit which contains around 3.5 Moz of gold with a grade of circa 6.5 gpt Au (calculated based on a gold price of $1,750/oz). Again, this is just a very crude mathematical exercise and I have no idea what the ACTUAL economic value of Wicheeda might be. However, the important thing is that an advanced stage deposit like this is probably worth as hell of a lot more than  C$24 M.

Well, the company is not sitting idly to put it mildly. It is in fact progressing rapidly on multiple fronts to further de-risk and increase value to shareholders…

On March 30 it was announced that:

The news release includes the following:

In other words we are approaching a time when the inferred value of the “Wicheeda REE Project” will be put in black and white. Personally I don’t think the company would bother with PEA if the current Market Cap was anywhere close to reflecting the theoretical value. And again, I doubt there would be much interest from external parties if the current Market Cap made sense.

Yesterday (April 20) it was announced that:

The news release included the following:

“Since initiating its option to acquire 100% of the Wicheeda REE Project in late 2018 and subsequently collecting a 26-tonne bulk sample, Defense Metals has rapidly advanced Wicheeda from an attractive prospect to compelling resource-stage project. Flotation and hydrometallurgical flowsheet development was completed in parallel with our highly successful 2019 diamond drill campaign that led to an upgraded and expanded mineral resource estimate. We are now excited to take the next step in demonstrating scale-up operability of the Wicheeda REE beneficiation process, leading to the production of a saleable NdPr oxide product.”

In short: The company is progressing on multiple fronts.

The only logical conclusion I can draw from all ongoing internal corporate activity, interest from major external parties, macro demand trends and geopolitical trends is that C$21.9 M in Market Cap is probably a joke valuation which should get rectified sooner or later.

From what I can gather the recent price pressure, and therefore undervaluation, has been greatly influenced by warrants being exercised. This “artificial” selling pressure will abate sooner or later and given everything that has been outlined in this article I would expect to see the uptrend continue shortly. Just to get back to the mere two month old highs the stock would need to rise almost 100%.

Then there is upside “threat” stemming from; 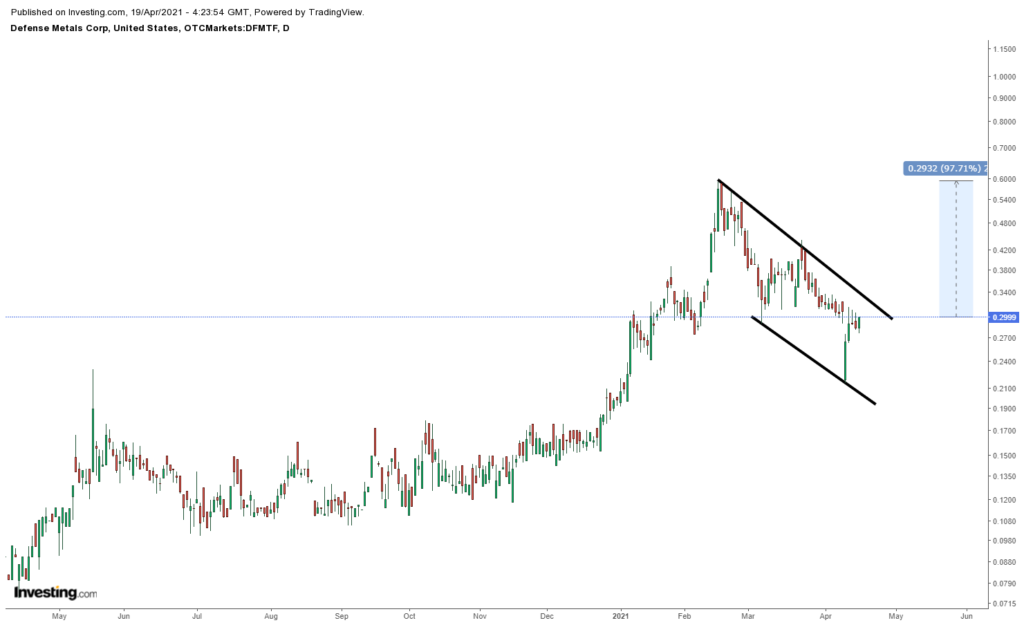 Note: This is not investment or trading advice. I cannot guarantee 100% accuracy as to what has been stated in this article. I own shares of Defense Metals and the company is a banner sponsor of The Hedgeless Horseman. Therefore assume I am bias, do your own due diligence and make up your own mind(!). Junior mining stocks are very risky and can be very volatile.