White Gold Corp (WGO.V) recently became a banner sponsor of my site and as is customary I am doing an introduction article on the company!

My Case For White Gold Corp in Short:

There are a few things worth noting when it comes to White Gold. First of all the company is the single largest landholder in the district with a massive 420,000 Hectares under control. The company also have impressive backing in the form of Agnico Eagle (MCAP: C$19.5 B), Kinross Gold (MCAP: C$10.9 B) as well as Eric Sprott. Suffice it to say that major companies obviously sees potential in all that land located in a tier 1 jurisdiction. Management and insiders control a solid 22.6% of the company which means they got a lot of skin in the game, which is always nice to see as a shareholder since their interests ought to align with regular shareholders. The company has more than C$6 M in the bank and more targets than I can count. In other words there are a lot of bullets in the chamber. Lastly there is over 1.5 Moz of gold in total resources, spread over three deposits, which means that there is a decent amount of gold underpinning the value of the company. With that said I think the exploration potential is the main value driver for White Gold.

One thing I think is worth pointing out is that in 2017 the Canadian and Yukon governments pledged to upgrade over 650 km of roads, bridges and stream crossings in the district. When this is done it should completely revamp the infrastructure in the area that should lead to cheaper exploration, quicker exploration and decreasing costs for any potential mine. This is a big thing that is going on in the background and will steadily increase the intrinsic value of the properties and every ounce found. In other words there is a “silent” value driver at work in the background that will push up the implied value of the district step by step.

All things considered I think a market cap of C$109 is too cheap for this kind of company in the current gold environment. One would be hard pressed to find; a) A cashed up juniors, b) Backed by Kinross Gold, Agnico Eagle, Eric Sprott & Shawn Ryan, c) In a tier 1 jurisdiction, d) With ounces on the books, e) An immense pipeline of targets and f) One of the largest land packages of any junior around for C$109 M and over C$ 6 M in the bank.

As I see it White Gold offers one of the better risk/reward cases around. Especially so given the current environment when a lot of juniors have already revalued a lot higher even though not much might have changed for said companies.

Now, lets go over some slides from the latest corporate presentation. 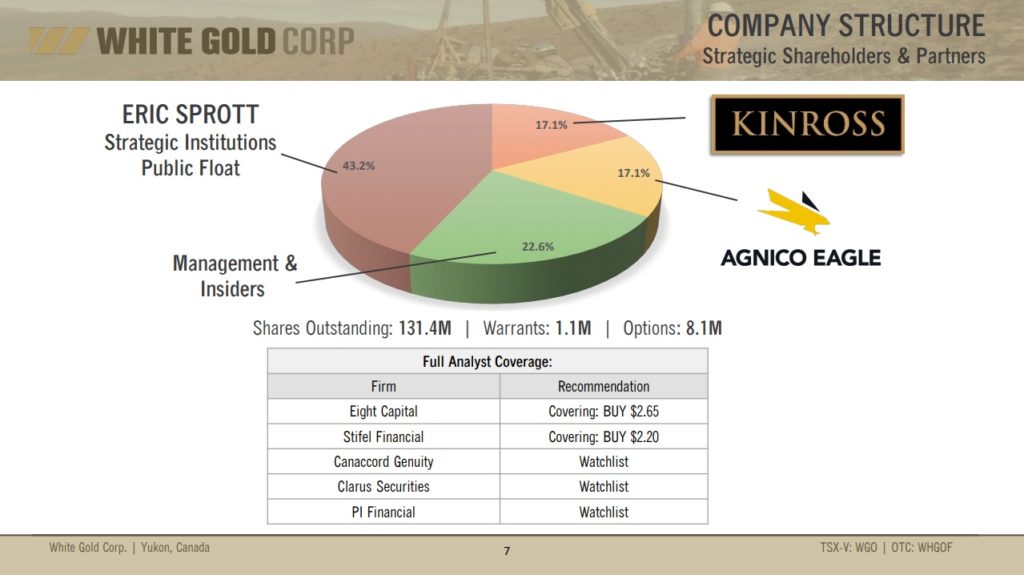 As stated earlier there are some big guns in White Gold Corp which gives the company a lot of credibility and underscores that there is real potential on the companies large land package even though they haven’t found a “bulls eye” target yet. The large insider position also, again, means that management and insiders have a real incentive to work for the benefit of all shareholders. There are certainly no guarantees of success in this business but an investor really wants the incentive for success to be there. 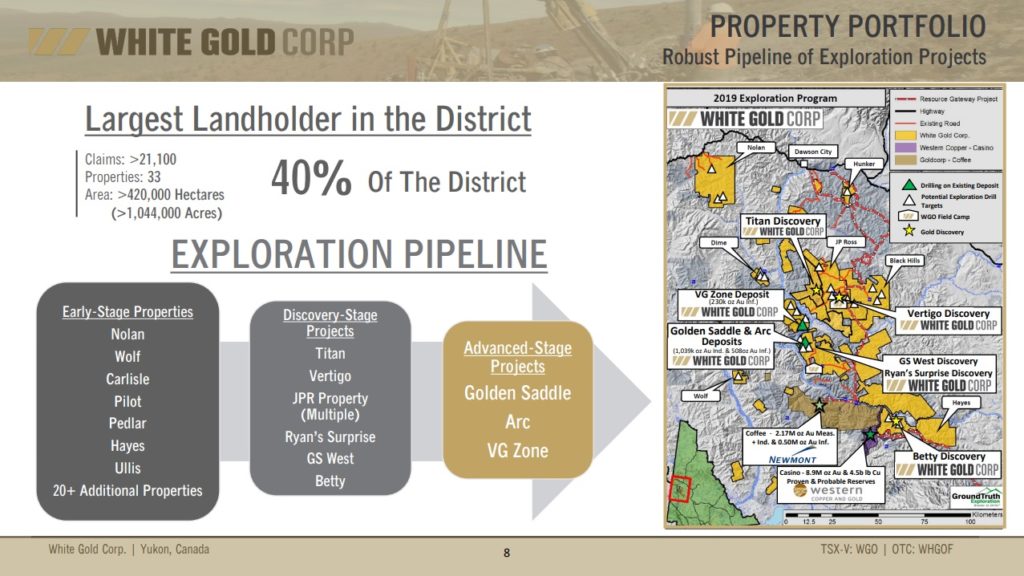 As I also stated earlier I think the blue sky exploration potential is the foremost attraction with White Gold. Yes, the company has ounces in the ground already which should help underpin the value of the company and also make sure that the stock has some beta to gold but what interests me the most is if they can find one or more large deposits that helped the Yukon create one of the most famous alluvial gold rushes in history back in the day. The company does not need to hit a home run at every project for shareholders to do well. They just need to either make a pre-existing discovery into a home run or find one in their vast early-stage property portfolio. In other words there are a lot of bullets in the chamber and only one needs to hit.

Another aspect to consider is the proximity to Newmont’s Coffee Deposit in the southern area of the district. The asset came into the hands of Newmont through the merger with Goldcorp which originally got hold of the deposit through the acquisition of Kaminak Gold. This deposit might or might not be big enough for Newmont to develop, especially since Newmont has gotten even bigger, but Newmont could therefore be very interested in case White Gold comes up with something that would complement the Coffee Deposit. A solid satellite deposit or two combined with the increased infrastructure in the district might very well tip the scale when it comes to developing the Coffee Deposit. Anyway, it’s good to have a major nearby since it increases the chance of a natural exit for White Gold in case the company hits at least one home run.

Gold in The Ground

For risk/reward to be good in a junior I usually want to see some cushion on the downside. Put another way I like to have a lot of upside potential while not paying for much more than what a company already has. This downside risk versus upside potential is the very essence of the risk/reward concept that I live by. Fortunately White Gold has some projects with gold in the ground already as well as further exploration potential. Note that the implied value of these ounces will increase, alongside with the infrastructure build-out, without White Gold even having to lift a finger themselves. 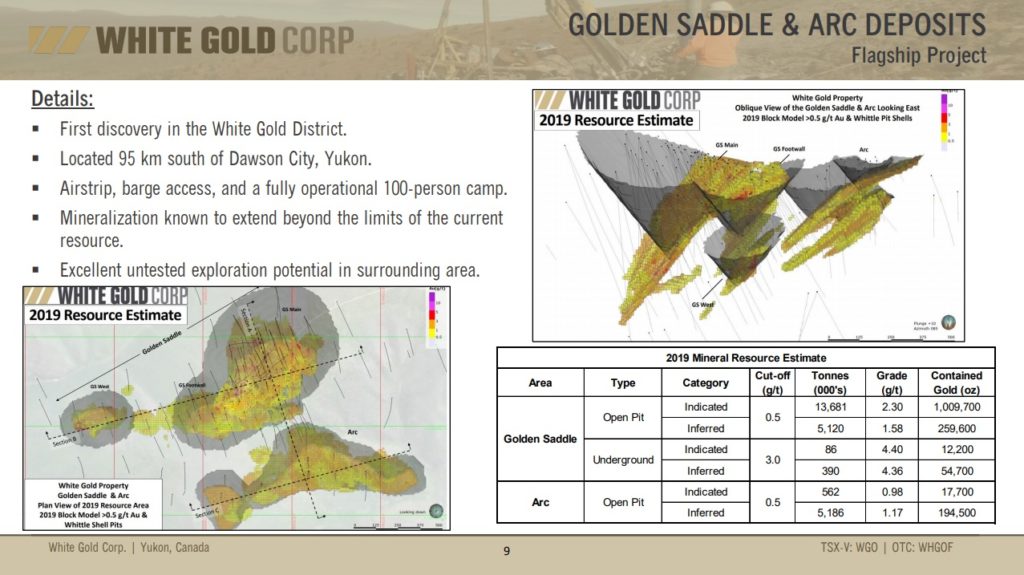 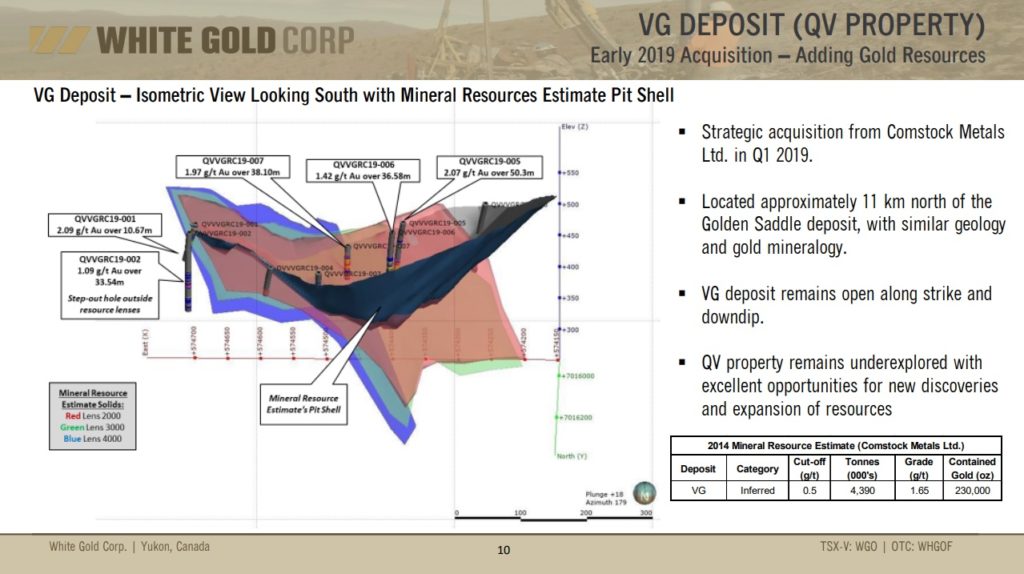 These deposits might not be big enough to put into production today but it still means that White Gold currently has over 1.7 Moz in total resources on the books and any additional ounce found should increase the value of all ounces since it would mean that the resources overall get closer to reaching “critical mass”. What I mean by that is the fact that as the resources grow the likelihood of these deposits turning into something worthy to put in production increases with it. In addition to that the increasing infrastructure will also lower the threshold for “critical mass” since the implied margins on any ounces will increase with better access etc.

It shouldn’t come as a surprise that an over 400,000 hectares land package comes with a lot of exploration potential. As stated previously White Gold has countless targets in different stages and that’s “only” the targets that are known to date. Anyway, there have already been some impressive high grade hits confirmed within these early-stage exploration properties such as the “Titan Target”: 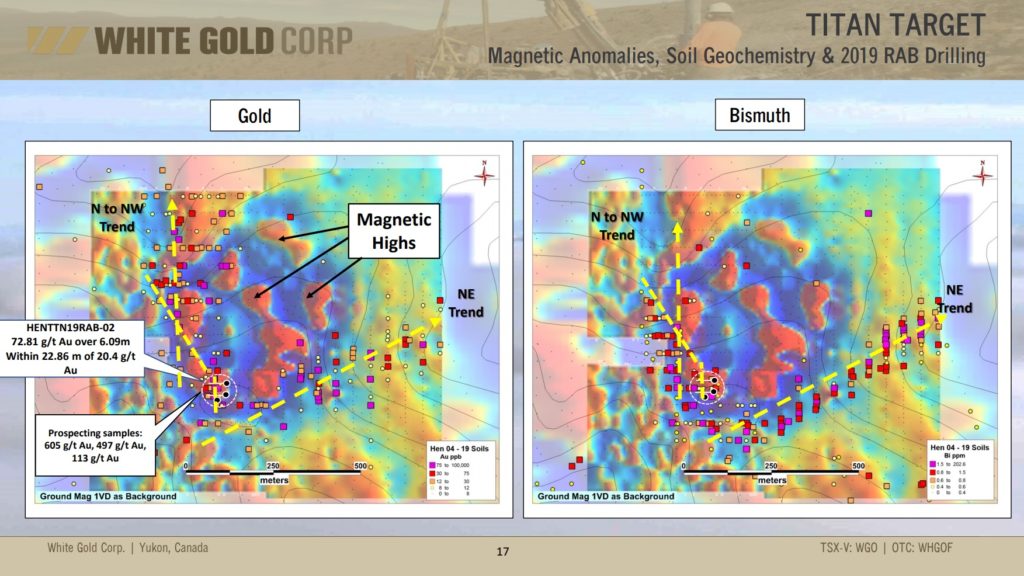 The “JP Ross Property” is another area with a lot of smoke: 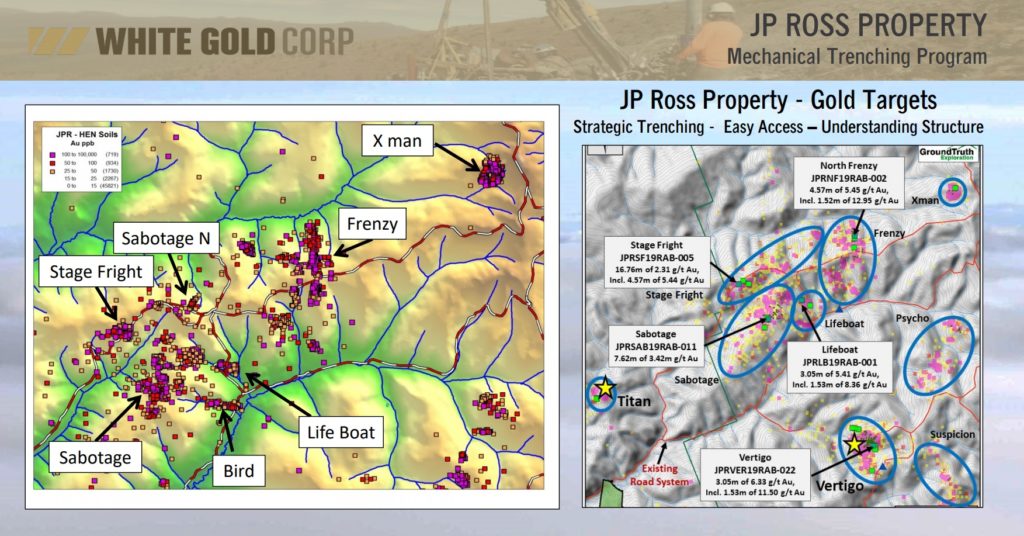 Or how about the “Ryan’s Surprise” Target: 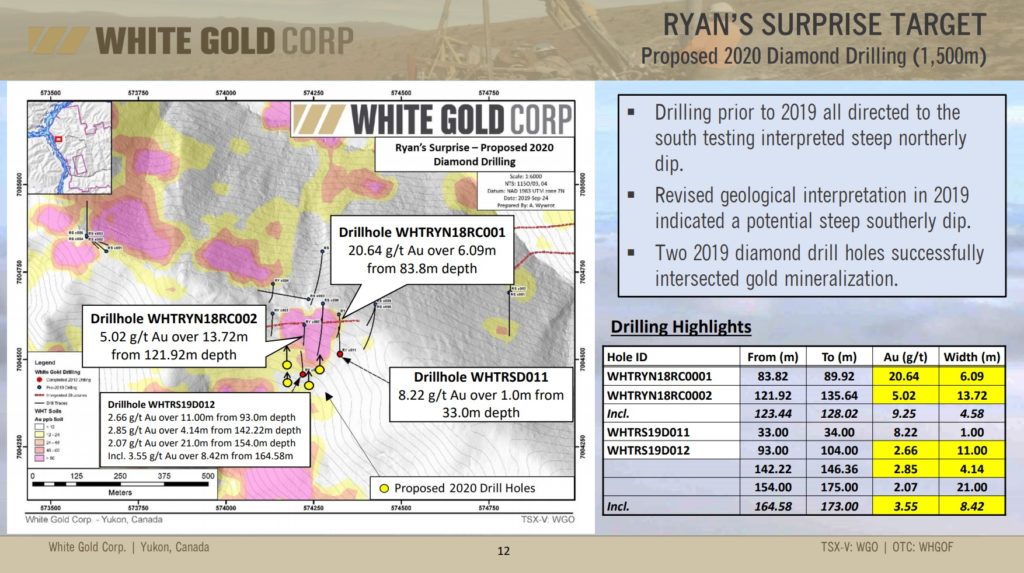 … There is obviously a lot of gold in the district as evidenced by both the legendary alluvial gold rush as well as the fact that White Gold is seeing a lot of smoke and have gotten some good hits in many different areas. The Coffee Deposit is another sign that the districts has potential for multi million ounce deposits.

There are loads more slides in the presentation deck, as well as on the website itself, showing a lot of smoke in many different areas. There is a very impressive interactive map to boot so anyone who loves maps and/or wants to dig deeper to appreciate the total amount of targets currently known then there is fortunately a lot of material to digest.

The field season in Yukon is relatively short as it is and Covid hasn’t helped. Still, the company has budgeted for a circa $4 M exploration program this year which will include multi target drilling as well as fieldwork in different areas: 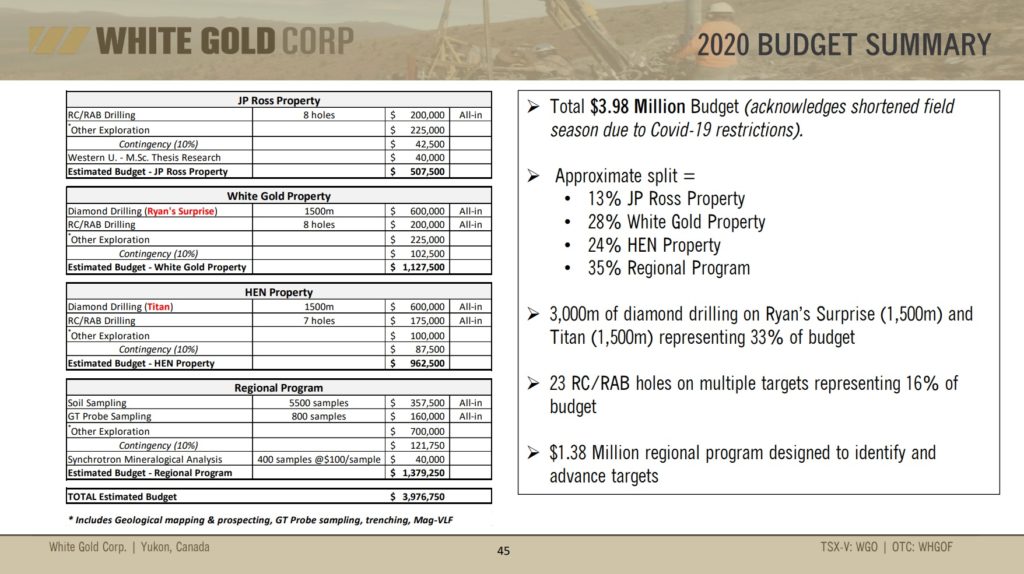 White Gold’s stock has been a laggard as of late which is the main reason for why I see it as one of the better risk/reward cases in the sector. If the stock was “hot” the company would be more expensive, downside risk higher and upside potential lower. In other words the risk/reward would be worse. Since I am primarily a value investor I don’t look for the hottest stocks. I rather look for the stocks with the best risk/reward and that usually means companies who’s stock hasn’t run that much or hasn’t run far enough for the risk/reward to be bad compared to other opportunities around. Personally I think the short(er) field season has been weighing on the stock. In other words I think there is a “boredom discount” involved. Anyhow there are multiple targets planned to be drilled this year and if a “boredom discount” can give someone else a chance to get in cheaper with a better risk/reward then who am I to complain.

The combination of people involved, resources in the ground, blue sky exploration upside and jurisdiction (with a tail wind) leads to a solid risk/reward case in my eyes. There is cushion to the downside in the form of 1.7 moz of gold on the books, in a tier 1 jurisdiction, coupled with impressive backers. This makes it hard for me to see someone losing their shirt in this stock, which is more common than not in this sector, in my very personal opinion. On the flip side there is a lot of exploration potential in the absolutely enormous 400,000 hectares land package which already have a bunch of targets outlined.

As always, I am just sharing my views and it’s up to each and every reader to make up their own mind in terms of White Gold Corp being an attractive investment or not. I own shares and so does some family members. That coupled with White Gold being a passive banner sponsor makes me biased but I think/hope I have explained the case as I see it relatively well.

I’m not really a trader but I do look at charts from time to time and this non-log chart of White Gold suggests to me that it could get wild once this coiling is complete and it (potentially) breaks that 3-year trend line in blue:

… Given that I think the company is relatively cheap compared to most other juniors, which means risk/reward looks better than most, I would think the risk is to the upside at these levels. Sure, it could do a false break down first but I don’t see any fundamental reason for why it would be cheaper at least.

Note: This is not investment advice. Always do your own due diligence. I am not an investment advisor, geologist nor am I a mining engineer. This article is highly speculative and it’s just my opinions. I own shares of White Gold Corp and the company is a passive banner sponsor. I was not paid to write this article.