I thought it was time to revisit Inflection Resources (AUCU.CN) which, along with many juniors, has been punished hard in this ongoing correction. As of this moment the valuation has come all the way down to C$10.33 M (@ $0.145/share) and assume the company has a couple of million in cash still. In short I see it as a high risk/high reward play with >>10X potential and it is part of my well diversified portfolio.

Inflection Resources owns an obscene amount of ground in NSW and Queensland, Australia:

The team which is made up of people who pretty much all have background in majors (BHP, Newcrest, Kinross, Teck, Normandy Mining and CRA etc) are taking a numbers approach in an effort to find one ore more giant Cadia type deposits in the Macquarie Arc and gold deposits in Queensland. 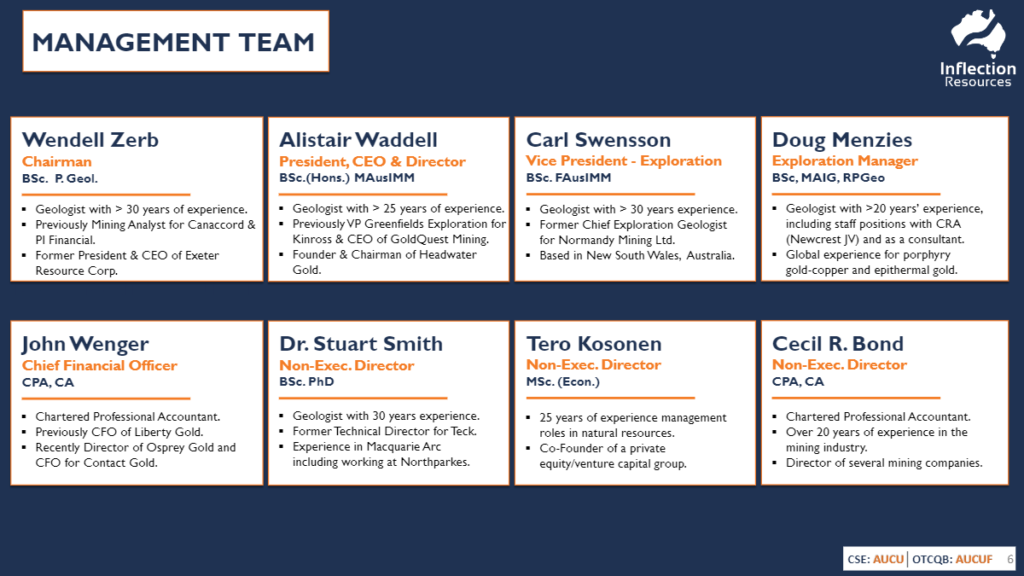 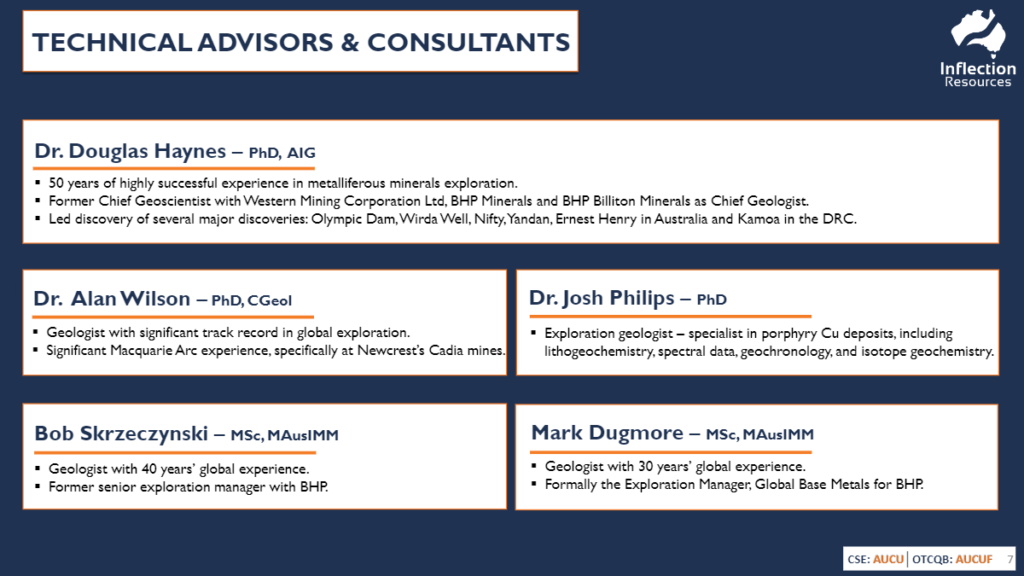 Insiders own 31% of the company and the share registry is impressive with the likes of Crescat Capital, Dundee Corporation, Plethora, Resource Capital Funds and Sprott: 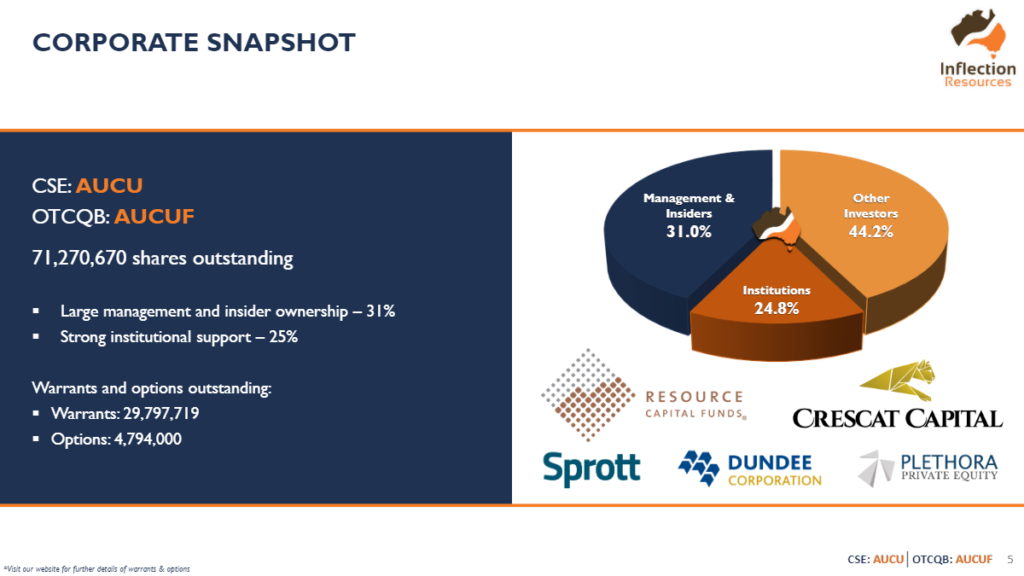 Anyway, the company has over 8,000 km2 of exploration licenses and applications, in an area of New South Wales, which is inhabited by Majors and their major mines: 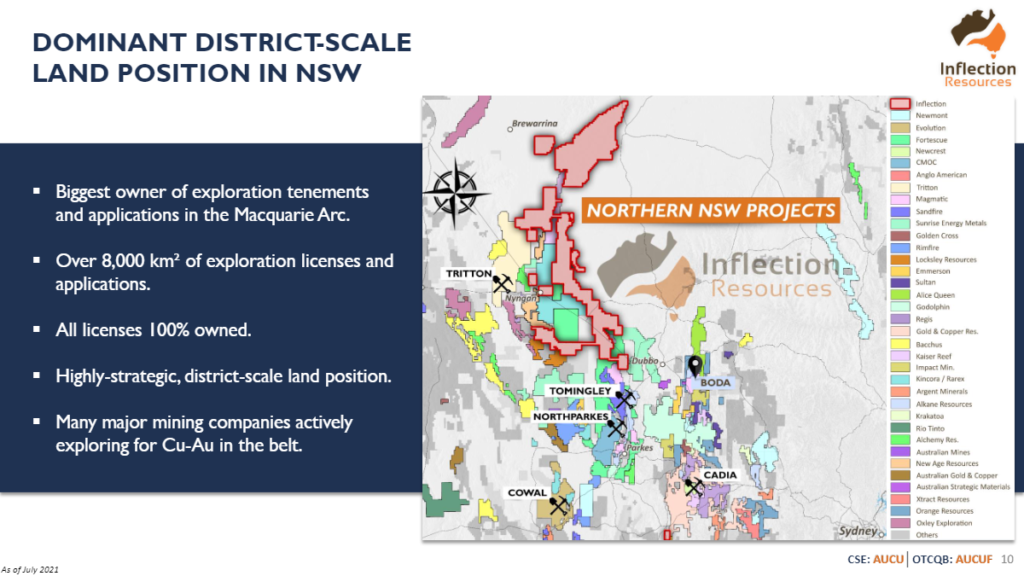 Now given the enormity of the prizes the company is chasing relative to the miniscule valuation it is easy to see that almost no success chance at all is currently priced in. It’s almost like the retail market has given the company up for dead. I mean just looking at the share price one could be forgiven to assume that “things have not gone well”. With that said this is high risk/high reward, grassroot exploration and the major mines in this region are worth say $500 M up to several billions as is the case for Cadia, the upside potential from these levels becomes obvious. Now I don’t want people to think it’s anything like a coin toss to find another Cadia. However at C$10 M in Market Cap one could argue there is a 2% chance priced in of finding somethin worth $500 M and much less than that to find another Cadia… And Inflection is planning to test some >20 targets.

So has things really gone so bad? Is the story over? Are the lights turned off as the share price action would have us believe?

Well not if you simply read the latest news release from Sept 23:

Alistair Waddell, Inflection’s President and CEO, states: “The drilling completed to-date in Northern New South Wales continues to refine our knowledge of the Macquarie Arc volcanics. We are excited to continue our efforts by focusing on the highest priority targets with first pass and step-out drill holes. In particular, a series of drill holes, recently cleared for access, will test new high priority areas at Trangie. We remain confident in our systematic, geoscience-based approach to targeting new Cu-Au systems located in the northern covered extension of the Macquarie Arc. Finally, the discovery of highly anomalous Zirconium and REE’s at Marra is encouraging and adds another dimension to our innovative exploration program.”

Exploration Update
The Company is continuing to explore its large portfolio of 100% owned projects for large alkalic copper-gold and gold deposits in the northern extension of the Macquarie Arc, Australia’s premier porphyry copper-gold province. Seven additional holes have been completed into the Waratah, Newhaven, Melmiland and Marra targets, totalling 1,603 metres. Results from these drill holes are as follows: 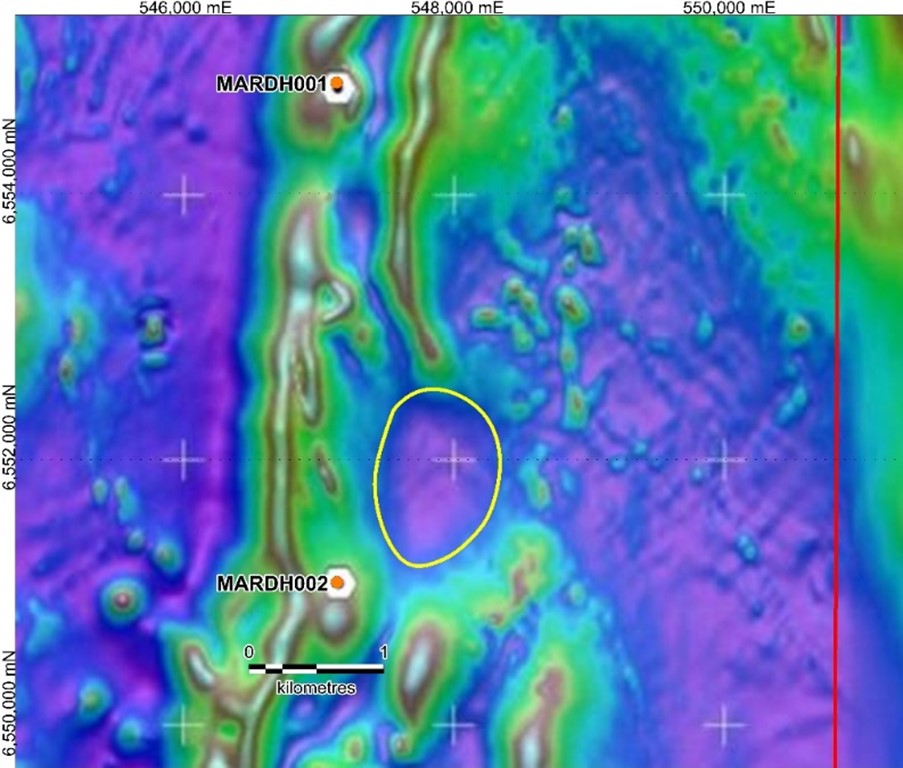 … First of all note the scale and distance between those drill holes. What is that? Like 4 km? Anyway, the company mentions that the two holes hit “highly anomalous Zirconium and REE’s” and that “A circular magnetic low evident in the regional data (Figure 1) located between the two Inflection drill holes is inferred by the Company’s geologists to potentially represent an alkaline intrusion with similarities to the Dubbo (Toongi) Project.”

The Dubbo (Toongi) Project is zirconium/REE deposit which belongs to Australian Strategic Metals that has a valuation of A$1.43 B. Even though the “plan” hasn’t been to find a zirconium/REE deposit one would be a fool not the say “please and thank you” when one gets a whiff of such potential. The plan is now to jam one hole into the yellow circle which lies between the two reported drill holes which can be seen in the picture above.

What’s the chance of success of finding a Dubbo type deposit worth A$1.43 B deposit? No idea. It’s probably a long shot… But we do get a kick at the can and again, with a C$10 M valuation, the chance of success that is priced in is like 1/143… So it’s not like one is paying up for the potential. I think Inflection would be cheap even if this target did not exist. If the company would be so lucky as to hit something then one could argue there could be “some” upside.

Updates on other targets from the NR:

Inflection has now completed 52 holes totalling 11,348 metres since the inception of the Northern New South Wales drill program. Drilling was paused for several weeks over the last quarter to reduce costly production delays due to Covid restrictions in NSW and a challenging period of extended wet weather, which impeded drill rig access onto several drill sites. Drilling is currently focusing on new previously untested targets at Trangie.

So to sum up: A sniff of copper at Waratah with another site to be test, one hole which did not see completion at Newhaven and two negative holes at Memiland.

Updates on the High Priority Targets Trangie & Nine Mile from the NR:

Initial conclusion of the test IP program is that the post-mineral sedimentary cover variably inhibits penetration using conventional IP. The Company has been in discussions with geophysical contractors to conduct surveys using the MIMDAS IP system, which reportedly has had excellent success in deep cover sequences of post mineral cover.

… So both Trangie and Nine Mile are still alive and kicking. Both targets are planned to have multiple step out holes into them with helping guidance from geophysics (although only IP will be of service at Trangie).

More 2021 Drilling Plans Going Forward as Per The NR:

… So Five additional targets in cue to be tested before year end, including the Zirconium/REE target, on top of multiple holes at Trangie as well as Nine Mile.

Firstly let me state the obvious: It’s not the company’s fault that Mr Market has no clue how to value juniors during extreme pessimism. Now it has fallen a lot like 98% of juniors so I was wrong and the story has turned to crap right? Well yes of course, because “the market is always” right, and “great Risk/Reward” in the form of a high risk/high reward, grassroot, blind exploration story where the case will play out over years with tens of targets tested means that it cannot go down in Price during the worst sector sentiment I have seen since 2015.

On a more serious note, what we know is that PRICE has gone down, but one could argue that the story is at least more de-risked today with; 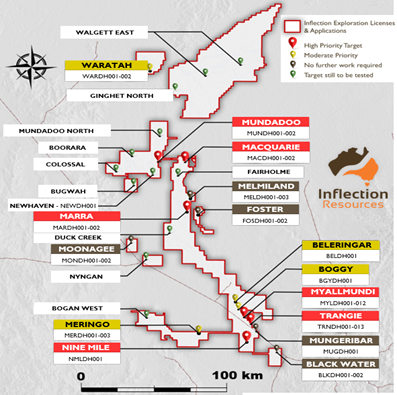 … So does that look like a dead and failed case, or a case of Mr Market being Mr Market at sentiment extremes, and simply cut the PRICE in half (same with many juniors) while the company itself has progressed things (same with many juniors)? To me this looks like a junior exploring that is steaming ahead according to the original plan. To me this looks a company that will test more targets in one field season than most juniors test over a couple of years. Granted some targets will only see a drill hole or two but that is also the beauty of the approach. An A-team like this can quickly judge the potential based on one or two holes which is why Inflection can cheaply drill (and kill) a bunch of targets.

In short I think that Inflection Resources at C$10 M offers investors (speculators) with a steady stream of shots at something big in a tier one jurisdiction.

Lastly I would say this about juniors overall right now:

I am still surprised to this day how many think that “The market is always right” or that “The market knows something” when in reality this is the most irrationally priced, brain dead sector there is where Price goes from way overshooting Value at sentiment peaks to Price way undershooting Value at sentiment bottoms. I got like >50 stories I personally think are no brainer buys and Inflection at this level is one (and was at $0.40/share). When this story is REALLY over we will either have lost money or made a lot of money.

Ps. Don’t put your whole pension fund in any one grassroot exploration stock.

Looks like there is some “bottom fishing” accumulation ongoing… 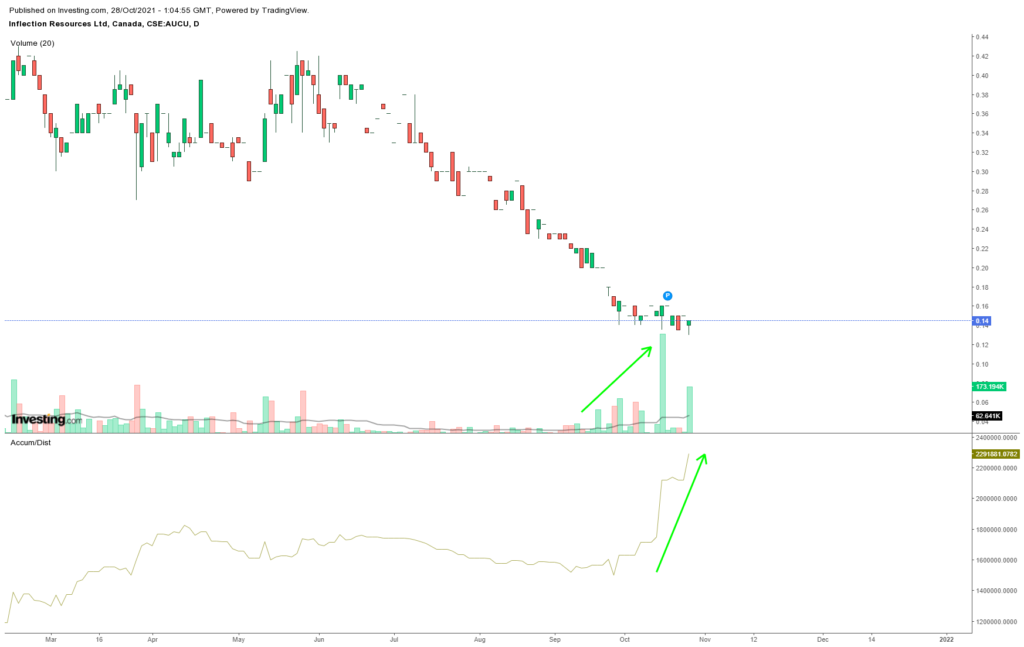 Note: This is not investing advice and I am not an investing advisor. I own shares of Inflection Resources and the company is a banner sponsor. Therefore assume I am biased, do your own due diligence and make up your own mind. I will not share in your potential profits or share in your potential losses. Junior explorers are risky and can be very volatile. Never invest money you cannot afford to lose. Assume I may buy or sell shares at any time etc. I cannot guarantee the accuracy of the information in this article.

One thought on “THH – Inflection Resources (AUCU.CN): Forgotten Yet Steaming Ahead”