Scottsdale, Arizona–(Newsfile Corp. – March 16, 2021) – TriStar Gold Inc. (TSXV: TSG) (OTCQX: TSGZF) (the Company or TriStar) is pleased to announce an interim mineral resource estimate for the Castelo de Sonhos gold project in Pará State Brazil. This model incorporates new information available at the end of 2020; drilling is still ongoing so an updated estimate will be completed in the upcoming months to be used in the prefeasibility study. The interim estimate shows that the CDS Project now has:

“This interim resource estimate already exceeds what we had targeted as a base for the preliminary feasibility study (PFS). We’re continuing to drill, and will have more drill results to add when resources are updated for the PFS. Grade remains strong, especially in Esperança South which anchors the project.” says Nick Appleyard, TriStar’s President and CEO. ” This interim model will be used to target any remaining drilling needed to eliminate gaps and to better delineate the extension that has opened up on the northern end of Esperança South, as well as to locate geotechnical investigations for pit wall stability.”

Table 1, Mineral resource estimate1 for the Castelo de Sonhos gold project (with an effective date of December 31, 2020) above a reporting cutoff 2 of 0.3 g/t Au. The Qualified Person is TriStar’s Vice President Mo Srivastava.

1Project totals may appear not to sum correctly since all numbers have been rounded to reflect the precision of Inferred and Indicated mineral resource estimates.

2The reporting cutoff corresponds to the marginal cutoff grade for an open pit with processing + G&A cost of $US 12/t, metallurgical recovery of 98% and a gold price of $US 1,250/oz. To meet the requirement of “reasonable prospect for eventual economic extraction” the mineral resources must also fall within a bounding pit shell with 55° walls. These are mineral resources and not reserves and as such do not have demonstrated economic viability.

3The metal content estimates reflect gold in situ, and do not include factors such as external dilution, mining losses and process recovery losses.

4TriStar is not aware of any environmental, permitting, legal, title, taxation, socio-economic, marketing or political factors that might materially affect these mineral resource estimates.

Shown in Figure 1, are examples of the litho-geochemical units and erosional surfaces on a cross-section interpreted with the help of GoldSpot Discoveries. Across the entire plateau, 15 units were interpreted and rendered as wire-framed solids. Some of these are sedimentary units that run sub-parallel to the bowl-shaped stratigraphy of the plateau’s meta-sediments. Others do not run parallel to the general bedding direction; instead, they are non-sedimentary rocks that cut across the stratigraphy. These were grouped into seven domains, separated by two erosional unconformities. 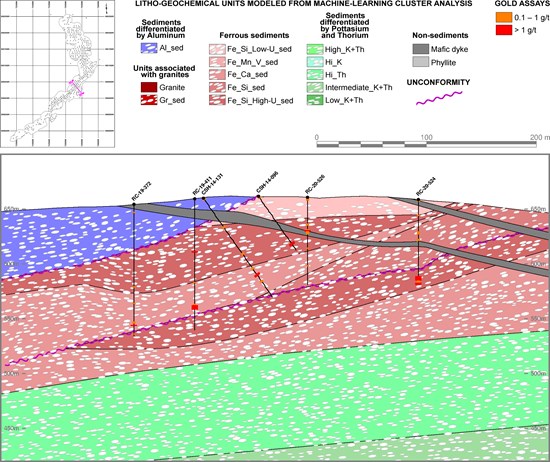 Figure 1, Model of litho-geochemical units on cross-section B-B’ on the southwest arm of Esperança South, where the mafic dykes cross. NOTE: except for silica, the specific elements used in the names of the clusters are not major constituents; they occur only in minor and trace quantities, but the machine learning cluster analysis identifies them as important discriminators.

The resource block model uses 20×20×4m blocks, the horizontal dimension of the blocks is slightly less than half of the 50m drill spacing. The block height is the same as the bench height chosen for the Preliminary Economic Assessment done in 2018.

In each block, the volumetric contribution of the seven domains was calculated directly from the litho-geochemical wireframes and the erosional unconformities. Approximately half of the blocks lie entirely inside a single domain; the other half have a mixture of two or more domains.

All rock in the resource model is assumed to have a dry bulk density of 2.68 t/m3, the average of the density measurements done on drill core in 2018.

For each domain that contributes to a block, Multiple Indicator Kriging (MIK) was used to estimate the gold grade distribution of its selective mining units (SMUs) using nearby samples from the same domain, with the SMU size based on planned equipment size, bench height, blast hole spacing, and on the experience of the operating mine at Tarkwa, in the same type of paleo-placer gold deposit. A 200×200×25m search ellipsoid was used for the MIK estimates for every domain in every block, aligned with the variogram model for the dominant domain. 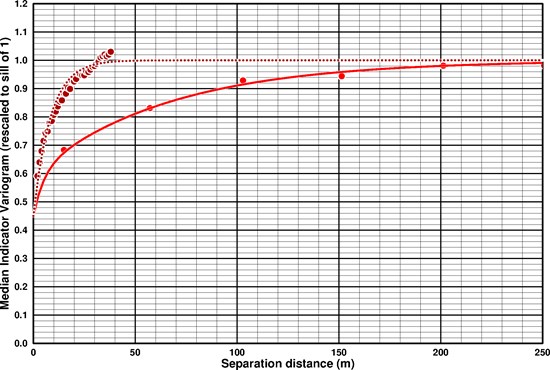 The mineral resources in Table 1 are constrained by open pit shells to meet the requirement that resources have “reasonable prospects for eventual economic extraction”. Within the pit shell material above a cut-off grade of 0.3 g/t was classified as Indicated in blocks for which grade estimation was able to use data from at least two separate drill holes in four octants, and for which the average distance to the nearby data was less than half the variogram range; these criteria are almost always met only in the areas where the drill holes are more closely spaced than 50m. All other blocks with grade estimates were classified as Inferred resources; since the search ellipse was aligned with the variogram ranges, Inferred blocks must have at least one sample within the range of the dominant domain variogram. These block-by-block classification codes were then spatially smoothed to avoid inconsistent classification of isolated blocks.