Rokmaster Resources is one of my favorites from a Risk/Reward and Margin of Safety perspective. It is a core holding in most of the more conservative portfolios I help manage . In these portfolios I prefer to concentrate holdings to plays with a lot of “Margin of Safety” which means that the companies should have de-risked projects which provides a big valuation cushion. Unfortunately I did not get into the latest Private Placement so I have bought my position in the open market. Note that the company is also a banner sponsor so always do your own due diligence given that I likely have a bias.

The company has a >2 Moz AuEQ resource in hand already and the Revel Ridge system(s) is wide open which has been confirmed by drilling. I am not alone thinking this since insiders have been buying like crazy for weeks on end: 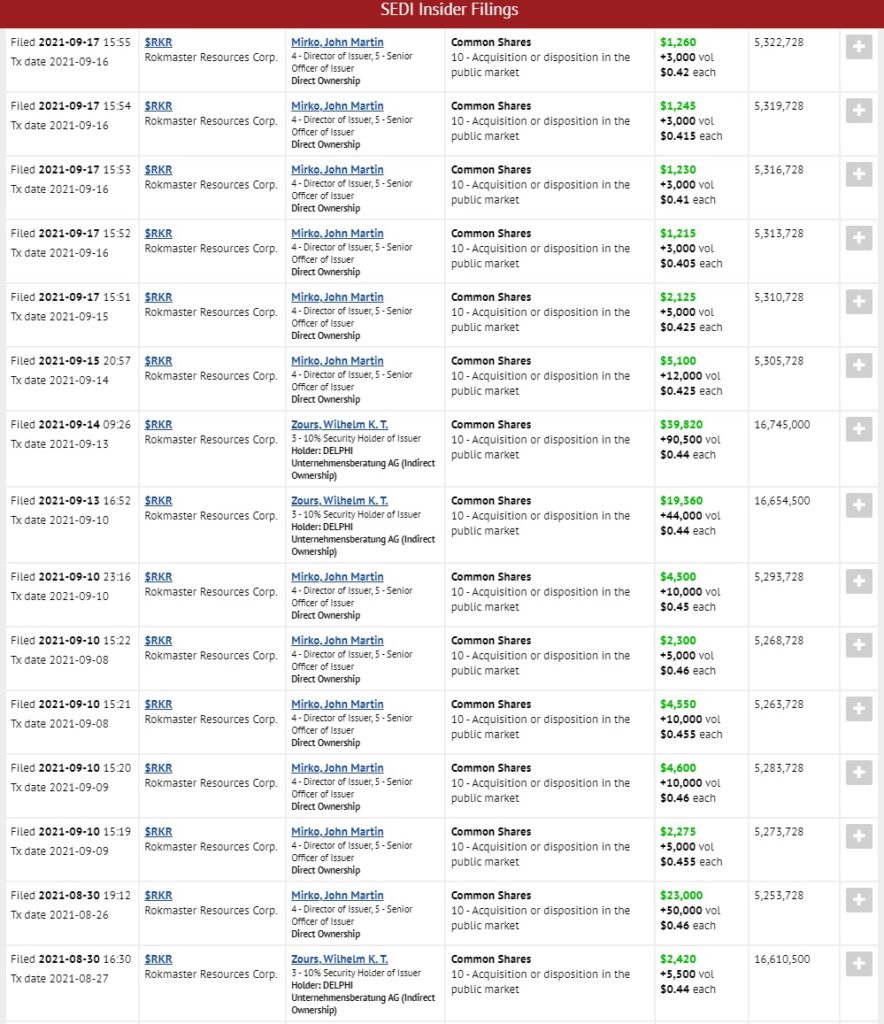 … That’s just a snapshot and the buying spree actually goes back all the way to November of 2020.

If anyone should know how good the project is and how undervalued the company is it would be the insiders. This kind of insider buying is not something one sees every day. Especially from more than one insider. One thing to note is that Rokmaster needs to pay C$44.2 M over a five year period to acquire 100% ownership of the flagship “Revel Ridge” project. I don’t see this as a major hurdle because I think that within a few years the resource will be substantially larger and I would also guess that the gold and silver price will be substantially higher.

Insiders, family and close associates own around 31% of the company already so it’s not like the insiders didn’t have significant exposure already. This kind of additional insider buying in the market tells me that they are very confident that they will make a killing in this stock and by extension it signals that they think there will be little problem in terms of raising the money needed to acquire 100% ownership.

My Case in Short

Rokmaster is in my opinion one of few high quality cases that provides me with;

… Which means that if precious metals rocket higher I will get a lot of leverage and if precious metal prices stay put or go down the company could still increase the value of my shares a lot simply by expanding the resource. The blue sky case would be to have bought the stock cheap, like now, and find myself owning a company in a few years that has grown its inferred resource number by 2-3X while gold and silver are hitting new all time highs. If that happens I might be owning one of very few multimillion ounce, underground projects in a tier #1 jurisdiction that would interest mid tier or majors during a period with frothy M&A activity (Maybe that’s what the insiders see happening as well?).

The Revel Ridge Project is located in Southwest British Columbia (Canada) which is a tier #1 jurisdiction: 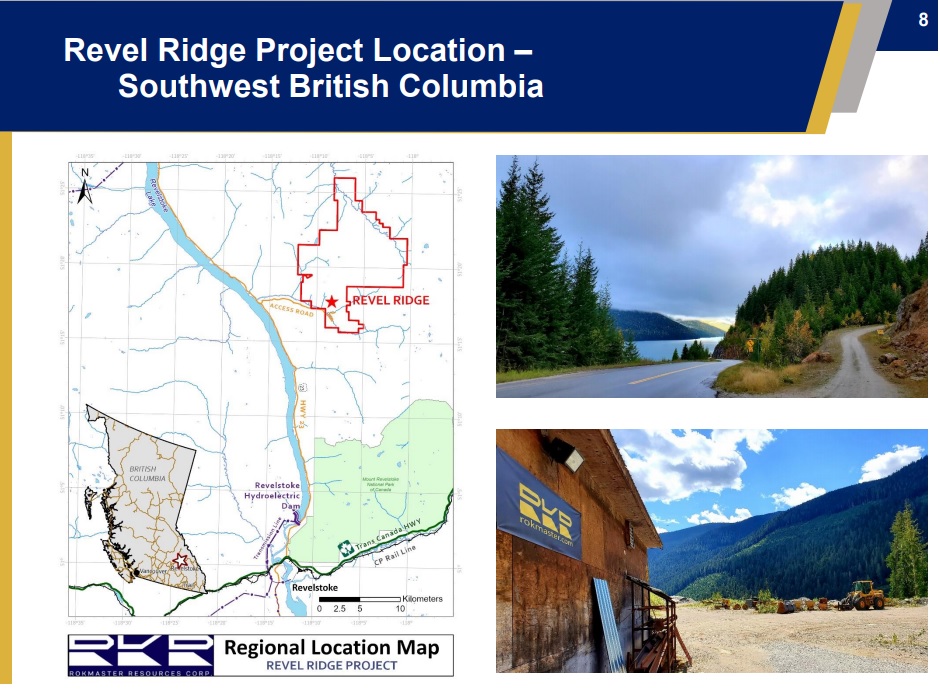 It’s a very large project and neighbours include the likes of Imperial Metals and Teck: 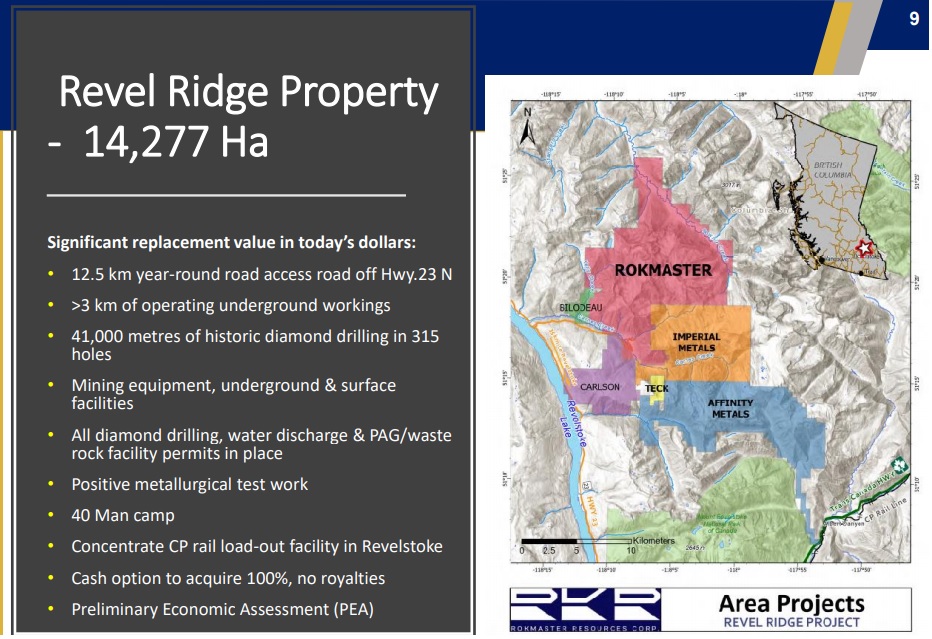 … As you can see one gets a lot of banked success with Rokmaster. Roads, underground workings, historic drilling, test works, 40 man camp and a PEA (!) etc.

The existing resource, which is getting outdated by every news release with assay results, amounts to ~2 Moz AuEQ: 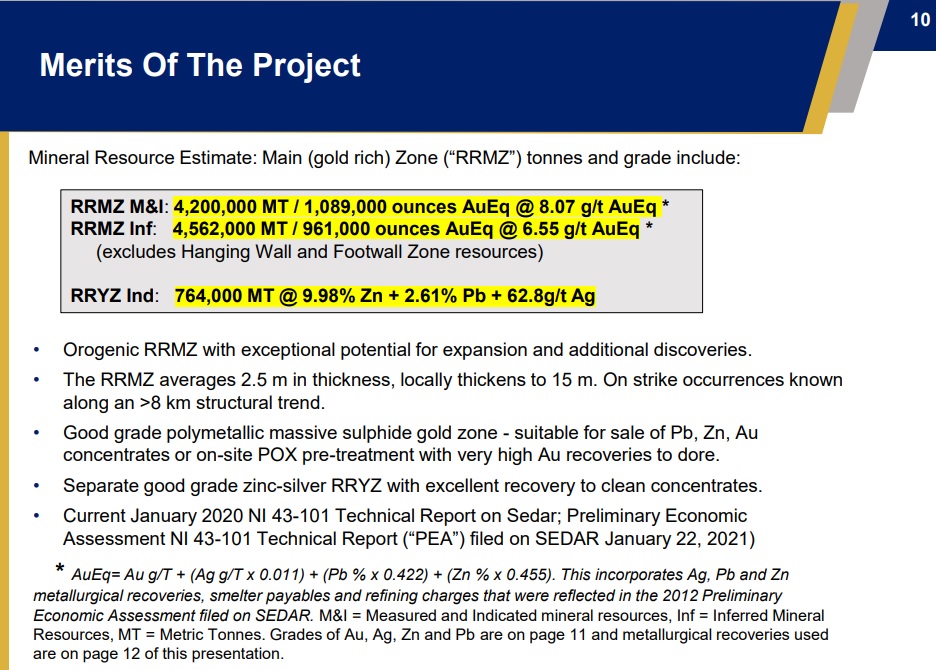 The mineral resource contains gold, silver, lead and zinc which combine to a gold equivalent (high) grade.  In other words one gets metals diversification since the system(s) contains both precious- and base metals.

The only reason I can see in terms of explaining the, in my opinion, ridiculously low share price is the fact that the company needs to pay C$44.2 M over 5 years in order to gain 100% ownership of the project:

… Personally I don’t think this will be a problem (Especially over a 5-year period). There simply aren’t many high-grade, underground, 2 Moz AuEQ deposits in a tier #1 jurisdiction around.

Quinton Hennigh has publicly stated he can see this deposit grow to 6 Moz over the coming years and if that happens it will be one of extremely few deposits of that size and grade in Canada.

Revel Ridge has immense potential which can be seen in the following slide. The Purple area in the left is the current resource, the red circle is where the company has been recently drilling (with great success), and the yellow circle is an area that is being tested right now. In theory the whole Orange area is still live! 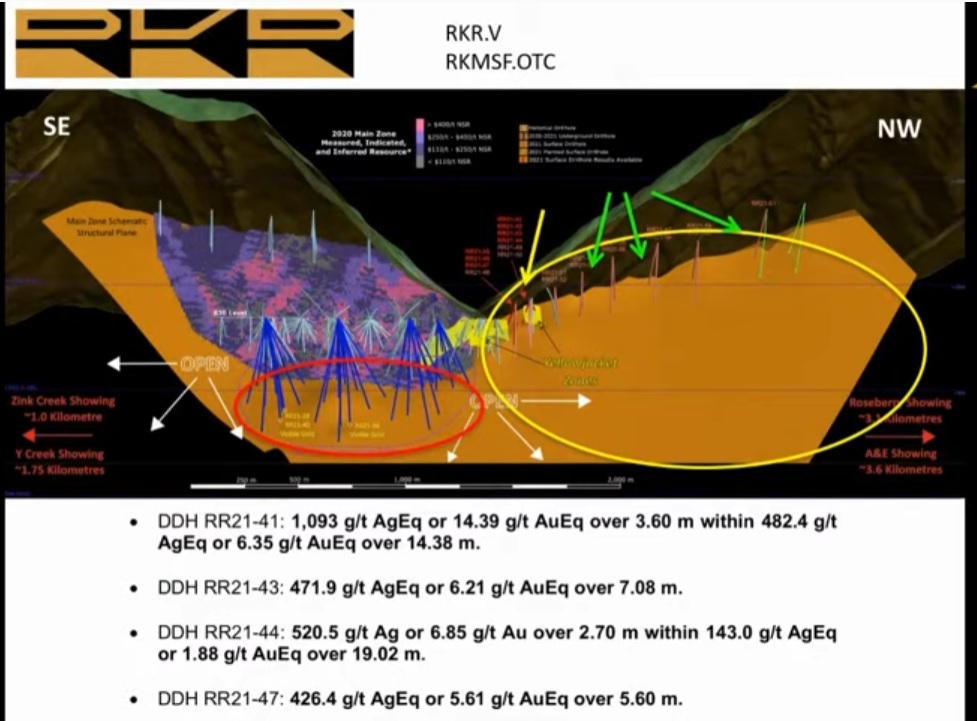 The slide above is taken from a recent Crescat Capital video which can be accessed HERE.

This blue sky potential isn’t just based on hope but the fact that there is a lot of smoke on surface over many kilometers: 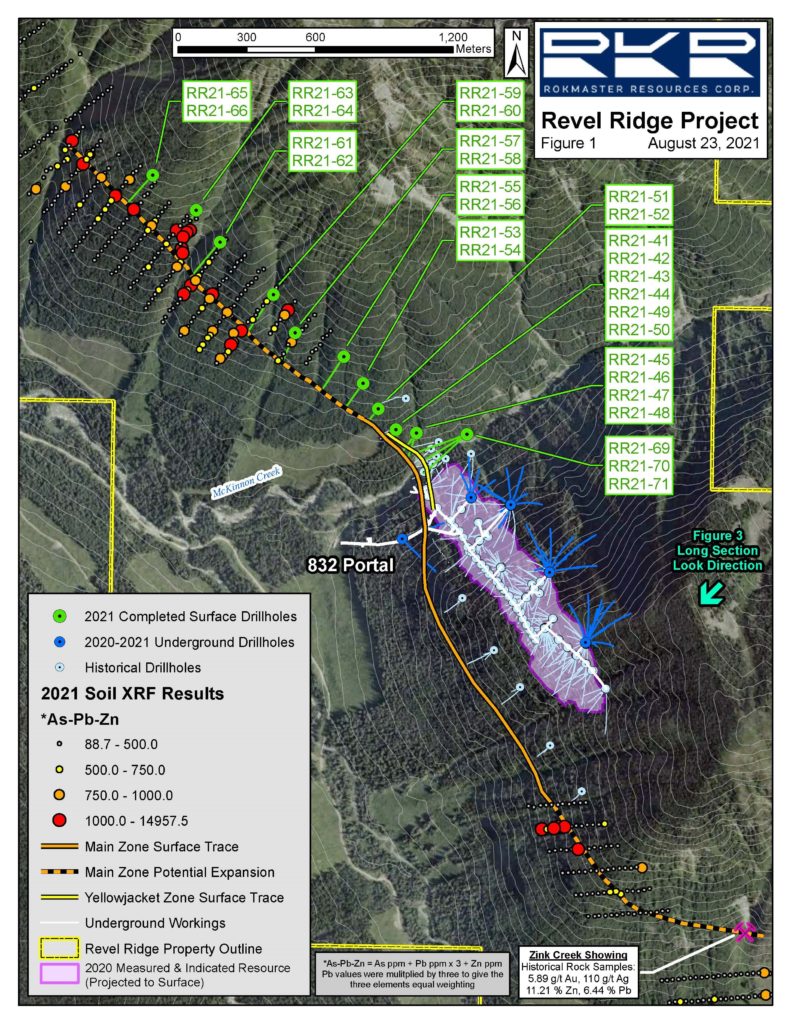 In total Rokmaster has a 7-8 km of strike with Au-Ag occurrences which obviously means there is a LOT of blue sky potential left. In one Crescat Capital video I remember Quinton stating that these types of system can go very deep as well. In other words there is both a lot of vertical and lateral potential left in addition to the 2 Moz AuEQ that is already banked.

The very aggressive step out drilling (green drill traces) which is currently being done should be considered to potentially have material impact on the implied value of Rokmaster:

Highlights from the latest NR from the Revel Ridge Surface Drill campaign:

Significant expansion of known RRYZ silver-zinc mineralization is documented by:

With a Market Cap of C$42.5 (US$31 M) I think that Rokmaster Resources is a “no brainer” from a Risk/Reward perspective given that the company already has 2 Moz AuEQ banked and that it looks like this system(s) has potential to be a several times larger. With the very aggressive insider buying I am even more confident that this is ridiculously undervalued. In a few years this might be one of the largest, undeveloped, underground high-grade projects in Canada.

The company is doing a lot more than drilling. Metallurgical studies, Lidar surveys, rock sampling, initiation of a detailed environmental audit and P&E Mining Consultands Ltd. has been engaged for a new 43-101 compliant resource.

Within 12 months I believe that the current ~2 Moz AuEQ resource will have grown materially and if we’re “lucky” some of the many step out holes will have hit and we can start playing with the thought of Revel Ridge having the potential to be an almost uniquely large underground deposit located in a tier #1 jurisdiction.

Note: This is not investment advice. Always do your own due diligence an make up your own mind. I cannot guarantee the accuracy of the information in this article. Assume I am biased. Junior mining companies can be very volatile and risky. I may buy or sell shares at any time.