Given that Beaton’s Creek still seem to not having been forgotten (and Sumitomo), I decided to go over some old schematics of Beaton’s Creek that are up on Novoresources.com. I really think these schematics captures the whole concept well and are probably foretelling of how Comet Well and the other Pilbara prospects will play out: 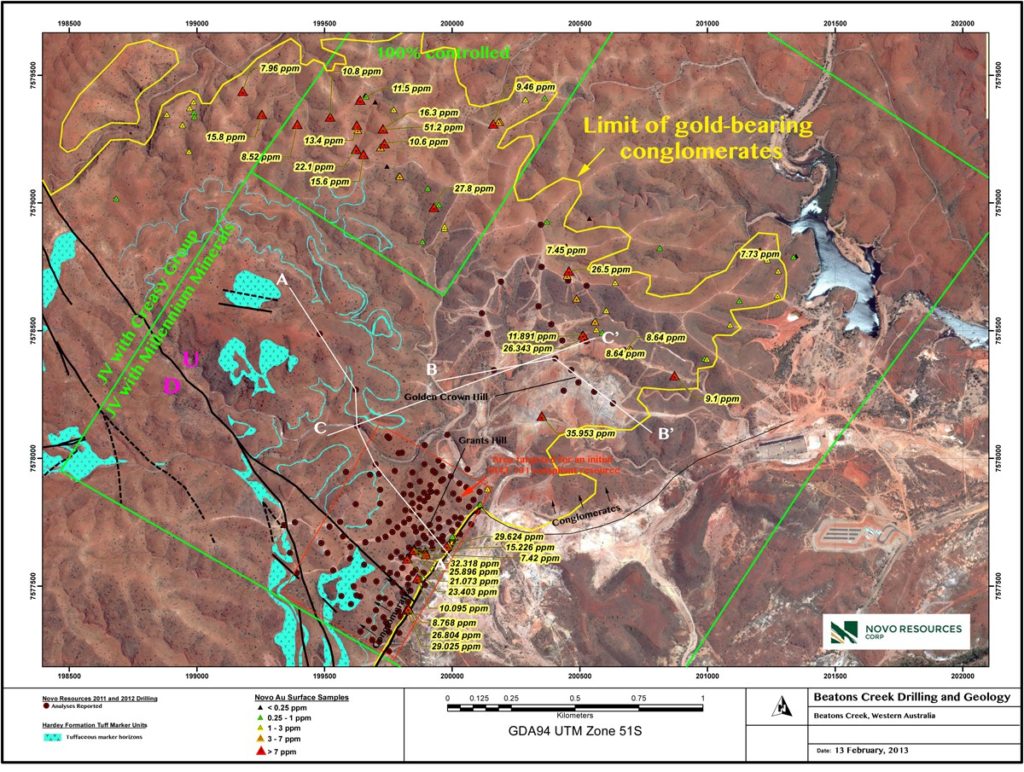 We can see a couple of things in the slide above: 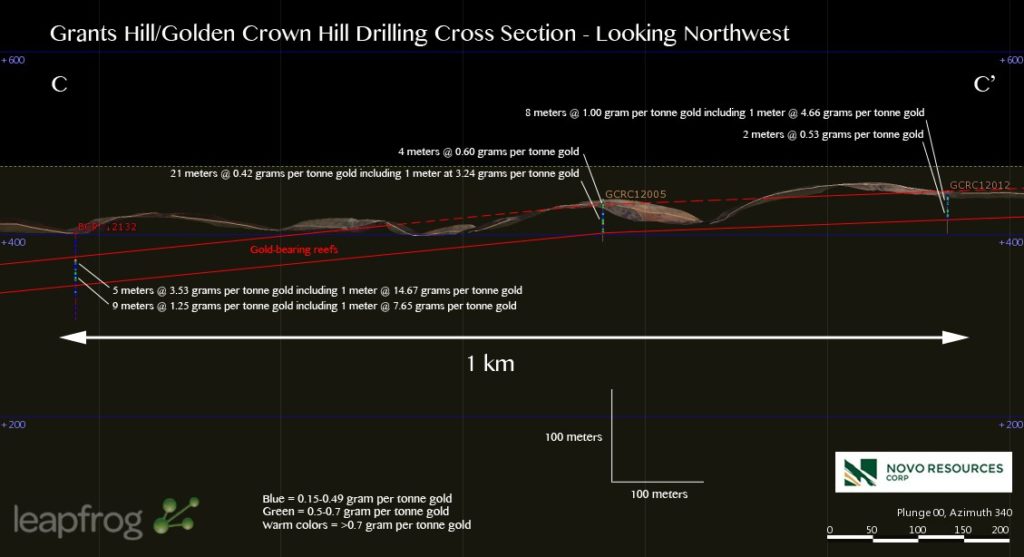 In the slide above we can see some impressive step out distances (400 and 600 metres) that all hit economic gold values over about the same length. One can also see the interpreted dip and that erosion (water etc) has randomly eroded away most of the cover rock at some places, thus exposing the gold bearing reef. 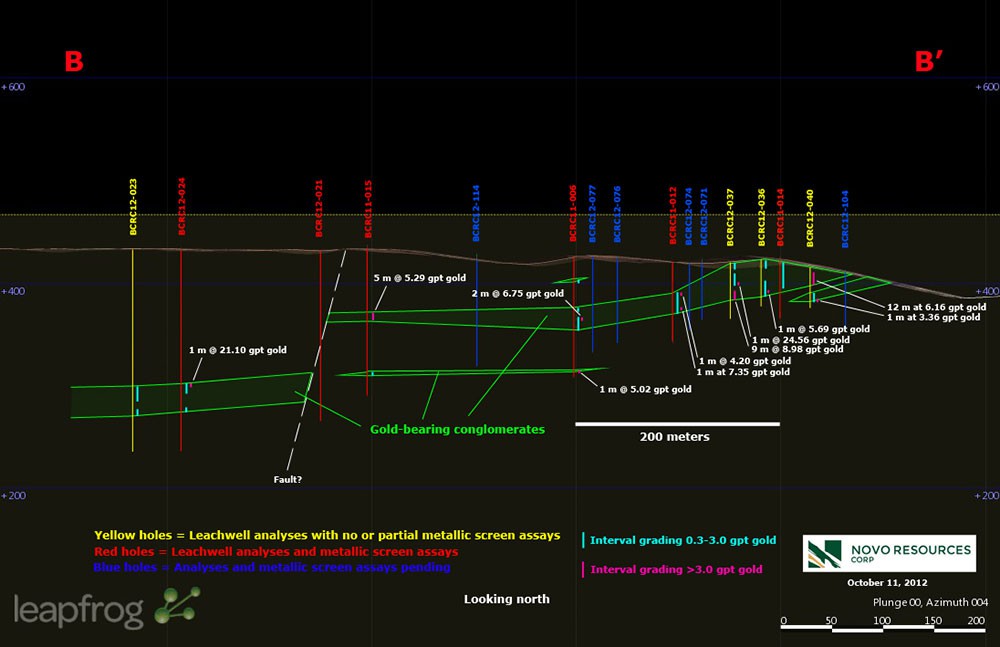 In the slide above we can see that the mineralization takes a step down due to faulting most likely. Novo has encountered faults already at Comet Well also. I doubt these faults play any role in regards to mineralization since the faulting most likely happened after the conglomerates were laid down, bu t it is interesting that at least a thin sequence of gold bearing conglomerates continue at the same level to the right in the mentioned slide. 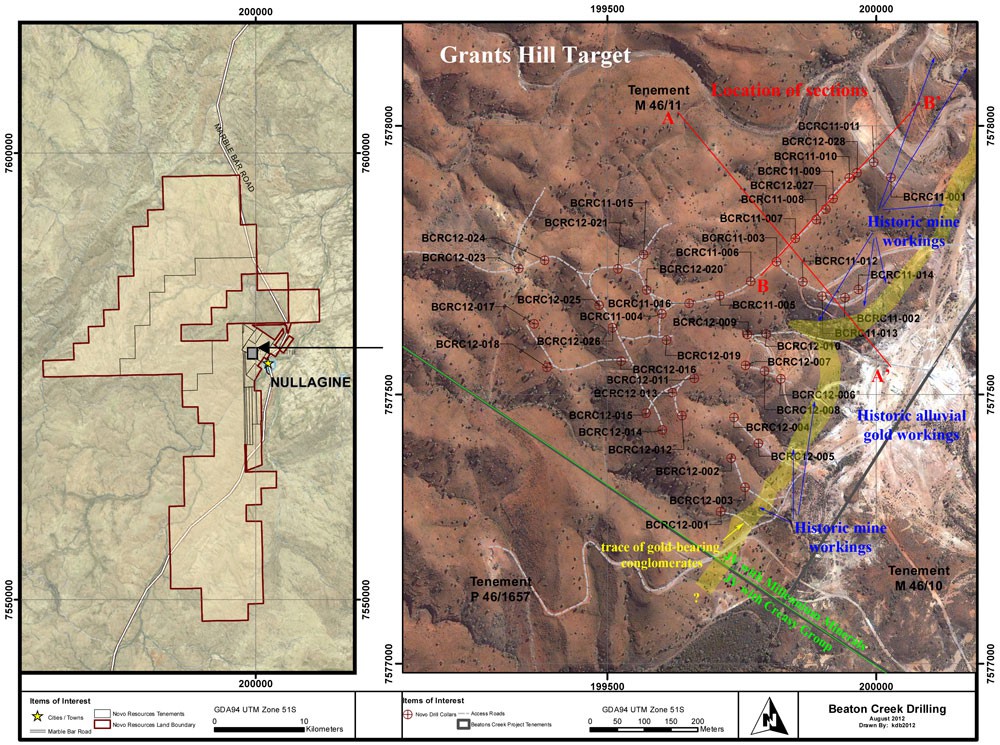 In the slide above we can see where Novo traced the gold bearing conglomerates marked in yellow. The area east of the strike seems to have been mined away already. What it does show is a continuous strike that really drives home the point about it being sheet like. 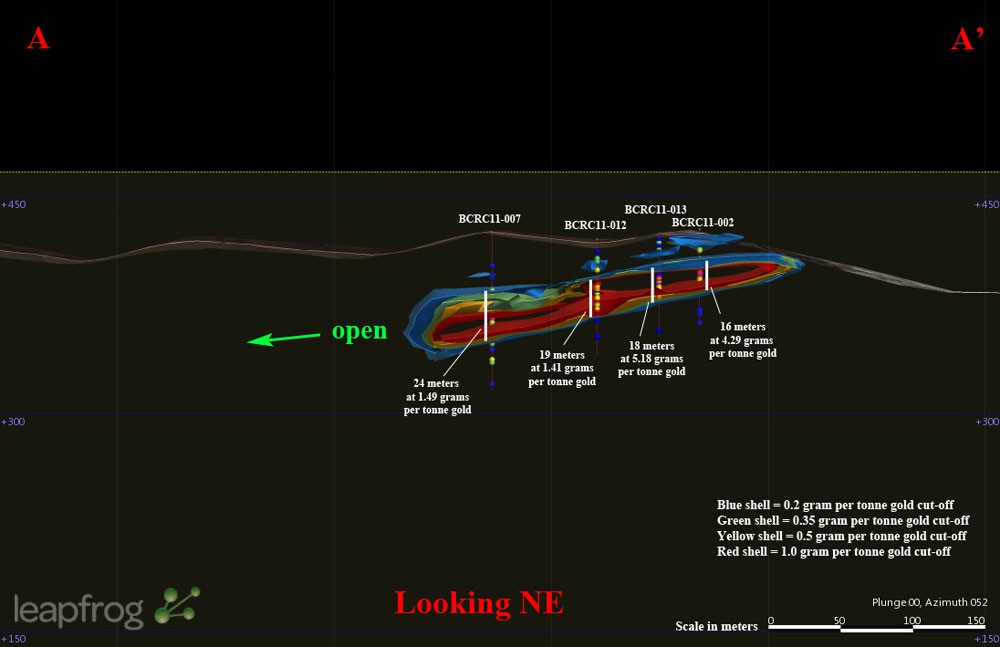 The slide above shows a situation where we seem to have a gently dipping conglomerate sheet that seems to incrementally get thicker down dip, and more importantly, looks to be wide open.

Sumitomo probably got interested because A) The Beaton’s Creek oxides are probably very high margin ounces and B) The conglomerate system seems wide open. I also think that the slides in this article is a good visualization of how I think Comet Well and Purdy’s reward (along with the other nearby areas) gold systems will turn out to be. Namely, very high grade gold sheets (we are up to THREE at Comet Well) that extend over a very long distance down dip. There might be local areas that are better than others though given that the terrain is never 100% uniform and some overlapping fan style streaks may be present.

The key takeaways would be that A) we have a lot data of how widespread the “melon seed” nuggets are, which suggests that this is indeed an entire basin play B) Beaton’s Creek confirms the “sheet style” gold systems that are present in Pilbara, and C) All these factors taken together suggests to me that we will find many and very large gold deposits all over pilbara in the coming years. We have barely scraped the surface, and the big gun Sumitomo got interested in Beaton’s Creek, and Kirkland Lake forked up $56 M to get a piece of Novo after the Purdy’s Reward and Comet Well prospects were discovered. This interest is only rational if both corporations believe that these kind of conglomerate gold systems found in Pilbara can be huge.

Who knows how big these systems will get. Beaton’s Creek, Comet Well and Purdy’s Reward is in my opinion just the edges or the tip of an iceberg if you will, and we get more news of gold bearing conglomerates many kilometers away all the time. I am personally convinced that Novo and some other Pilbara juniors are have only literally scratched the surface. If only some of these reported Fortescue gold prospects line up, we are talking so much gold that I don’t even dare to put a (public) number on it.

Novo has already discovered MULTIPLE prospects on their enormous land holdings, both Mt Roe and Hardey Formation targets. If Sumitomo saw enough potential in Beaton’s Creek system alone and Kirkland saw the potential in Purdy’s Reard and Comet Well system to warrant investment, what is the potential for Novo Resource and its 10,000 km2 land package as a whole?

I highly recommend listening to the latest interview with Quinton Hennigh while having the discussion above in mind: