The high-grade intersection is from hole K-21-17 that contains fine particles of visible gold in quartz vein. The hole intersected 50.38 g/t Au over 1.85 metres including 160.42 g/t over 0.55 metres. The quartz vein containing the visible gold is typically vuggy and locally contains stylolites and is similar to quartz veins containing high grade gold intersections of 20.6 g/t Au over 3.6 metres including 103.36 g/t over 0.3 metres and 10.48 g/t Au over 2.4 metres reported previously (see news release dated June 3, 2021). The intersection in hole K-21-17 represents a 30 metre step out to the northeast from the previous intercepts and extends the high-grade mineralization to approximately 40 metres along strike. The mineralization remains open in both directions. A summary of the high-grade intersection, as well as other assays received to date, are given in Table 1 below.

*Interval contains visible gold. All intersections are downhole length as there is insufficient Information to calculate true width.

“We are excited to see additional near surface high-grade gold assays, the highest to date, from our early drilling at Big Vein,” said Roger Moss, President and CEO of the Company. “We are extending the high-grade mineralization along strike and getting a handle on its plunge. Adding extra drills will allow us to aggressively test Big Vein as well as to follow up targets developing along the quartz vein corridor.”

The Big Vein target is an auriferous quartz vein exposed at surface that has been traced over 400 metres at surface along the Appleton Fault Zone. It lies within a larger northeast-southwest trending “quartz vein corridor” that stretches for over 7.5 kilometres as currently outlined with potential for expansion along the Appleton Fault Zone in both directions. Gold mineralization observed at Big Vein includes six occurrences of visible gold, assays of samples from which range from 1.87g/t to 1,065g/t gold. The visible gold is typically hosted in annealed and vuggy gray quartz, that is locally stylolitic with vugs often containing euhedral quartz infilling features characteristic of epizonal gold deposits.

The current drill program, recently increased to 50,000 metres, has only tested Big Vein over approximately 100 metres of strike length of the 400m surface exposure and vertical depths of 50 metres. However, drilling has already produced visible gold in four drill holes giving high grade intercepts as well as wide areas of gold mineralization associated with significant quartz veining and sulphide mineralization including arsenopyrite, pyrite and possible boulangerite noted along vein margins and as strong disseminations in the surrounding wall rocks.

True widths of the reported intersections have yet to be calculated. Assays are uncut. Samples of HQ split core were securely stored prior to shipping to Eastern Analytical Laboratory in Springdale, Newfoundland for assay. Eastern Analytical is an ISO/IEC17025 accredited laboratory. Samples are routinely analyzed for gold by standard 30g fire assay with ICP (inductively coupled plasma) finish with samples containing visible gold assayed by metallic screen/fire assay. The company submits blanks and certified reference standards at a rate of approximately 5% of the total samples in each batch.

Roger Moss, PhD., P.Geo., President and CEO of LabGold, a Qualified Person in accordance with Canadian regulatory requirements as set out in NI 43-101, has read and approved the scientific and technical information that forms the basis for the disclosure contained in this release.

The Company gratefully acknowledges the Newfoundland and Labrador Ministry of Natural Resources’ Junior Exploration Assistance (JEA) Program for its financial support for exploration of the Kingsway property.

About Labrador Gold
Labrador Gold is a Canadian based mineral exploration company focused on the acquisition and exploration of prospective gold projects in Eastern Canada.

In early March 2020, Labrador Gold acquired the option to earn a 100% interest in the Kingsway project in the Gander area of Newfoundland. The three licenses comprising the Kingsway project cover approximately 16km of the Appleton fault zone which is associated with gold occurrences in the region, including the New Found Gold discovery. Infrastructure in the area is excellent, located just 18km from the town of Gander with road access to the project, nearby electricity and abundant local water. LabGold recently increased its 20,000 metre diamond drill program to 50,000 metres targeting high-grade epizonal gold mineralization following encouraging early results. The Company has approximately $36 million in working capital and is well funded to carry out the planned program.

The Hopedale property covers much of the Hunt River and Florence Lake greenstone belts that stretch over 80 km. The belts are typical of greenstone belts around the world but have been underexplored by comparison. Initial work by Labrador Gold during 2017 show gold anomalies in soils and lake sediments over a 3 kilometre section of the northern portion of the Florence Lake greenstone belt in the vicinity of the known Thurber Dog gold showing where grab samples assayed up to 7.8g/t gold. In addition, anomalous gold in soil and lake sediment samples occur over approximately 40 kilometres along the southern section of the greenstone belt (see news release dated January 25th 2018 for more details). Labrador Gold now controls approximately 57km strike length of the Florence Lake Greenstone Belt.

The Ashuanipi gold project is located just 35 km from the historical iron ore mining community of Schefferville, which is linked by rail to the port of Sept Iles, Quebec in the south. The claim blocks cover large lake sediment gold anomalies that, with the exception of local prospecting, have not seen a systematic modern day exploration program. Results of the 2017 reconnaissance exploration program following up the lake sediment anomalies show gold anomalies in soils and lake sediments over a 15 kilometre long by 2 to 6 kilometre wide north-south trend and over a 14 kilometre long by 2 to 4 kilometre wide east-west trend. The anomalies appear to be broadly associated with magnetic highs and do not show any correlation with specific rock types on a regional scale (see news release dated January 18th 2018). This suggests a possible structural control on the localization of the gold anomalies. Historical work 30 km north on the Quebec side led to gold intersections of up to 2.23 grams per tonne (g/t) Au over 19.55 metres (not true width) (Source: IOS Services Geoscientifiques, 2012, Exploration and geological reconnaissance work in the Goodwood River Area, Sheffor Project, Summer Field Season 2011). Gold in both areas appears to be associated with similar rock types.

The Company has 150,577,206 common shares issued and outstanding and trades on the TSX Venture Exchange under the symbol LAB. 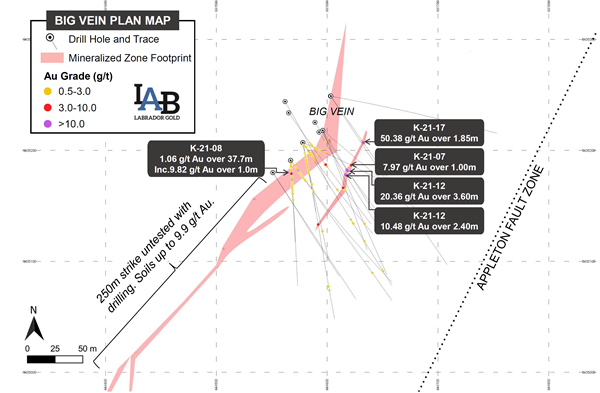 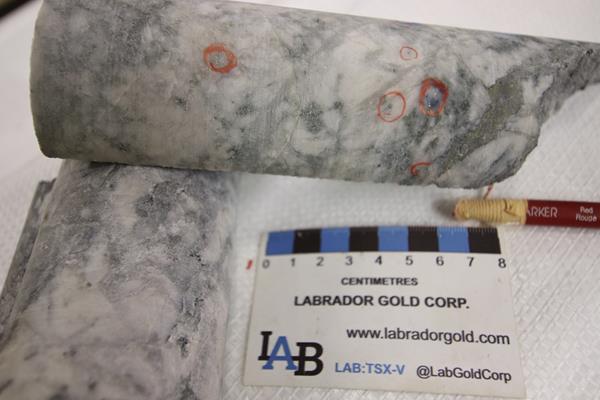