Vancouver, British Columbia–(Newsfile Corp. – April 8, 2021) –  Kuya Silver Corporation (CSE: KUYA) (OTCQB: KUYAF) (FSE: 6MR1) (the “Company” or “Kuya“) is pleased to announce the results of a recent surface sampling program to prospect the Bethania extension zone and the vicinity of the historical Española 2 adit. This batch of the program consisted of 97 rock chip samples, employing a combination of trenching to expose bedrock and outcrop along visible or inferred vein zones. Of the 97 samples reported, 76 were taken from veins (observed or inferred) and 21 samples taken from altered or unmineralized host rock (hanging wall or foot wall). These sampled vein zones are located approximately 600 metres to 1000 metres from the main Bethania adit and 100 metres to 500 metres east of easternmost underground development. When mineralized, the vein zones sampled reported anomalously high silver and lead, and in some cases anomalous gold. Anomalous zinc and copper grades, which can be associated with silver mineralization in the fresh veins underground, were rarely observed on surface.

Highlights of the Program

Kuya’s President and CEO, David Stein stated, “Kuya is very excited with this initial surface sampling program, which clearly indicates that the Bethania vein system continues along strike even further east than previously known. While we are highly confident in finding new veins in this swarm-like system, it is always a pleasant surprise to see new zones of high-grade mineralization sitting on surface up to 500 meters from the nearest underground development. The Santa Elena vein is particularly exceptional due to its high gold grades, something we have not seen to this extent in any other vein at Bethania. Kuya will use this information to help target future drilling and exploration along the strike extension of the Bethania mine.” 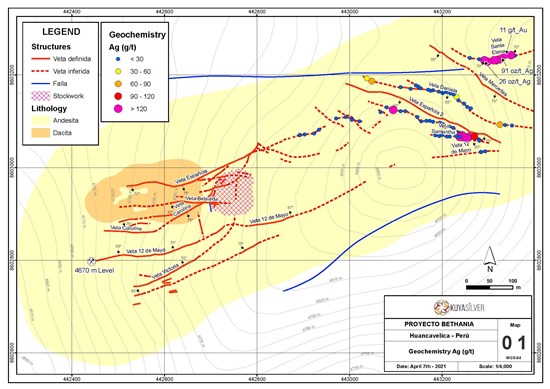 The technical content of this news release has been reviewed and approved by Dr. Quinton Hennigh, P.Geo., Chairman of Kuya and a Qualified Person as defined by National Instrument 43-101.

Neither the Canadian Securities Exchange nor the Investment Industry Regulatory Organization of Canada accepts responsibility for the adequacy or accuracy of this release.