Many know greed in the form of FOMO (“Fear of Missing Out”). This tends to happen when a security is quickly going up a lot. One thinks that it will “run away from me” and it’s best to get in no matter the valuation etc. Basically one simply believes that it will become more… Expensive and that one can’t miss out on that.

Another version of what I would call greed is when one knows that a security is cheap, with a good positive Expected Future Return, but does not buy due to fear of it going lower (becoming cheaper). I think a lot of people don’t realize how greedy this “strategy” is…

If a security is undervalued, which often happens during poor market sentiment, then one must understand that the pendulum will swing one day (it always does). So in essence one is rationally cognizant that one should make a good return on said security by buying it now and waiting for the wind to change. However, when one does not act on the opportunity, out of “fear” that said opportunity MIGHT get better, one is actually quite greedy…

Why? Because if there is an opportunity to buy something that is very likely to return say 80% within a two year period then it would be stupid not to act on said opportunity. Such a return is better than 99% of people will achieve at a going annual rate. What one is actually doing by not acting on it out of fear of a better opportunity POTENTIALLY materializing is saying that “An 80% return is not good enough for me and if it goes down I might buy and get a 120% return”…

First of all there are absolutely no guarantees that something that is already severely undervalued will get even more undervalued since the “risk” is to the upside by default. Furthermore, there are no guarantees that one will not fear that it will get even lower after it has gone lower and one is still too paralyzed to act on the opportunity. The only thing one can control is what Price one pays and the only thing one knows is what the Price is right now…

More importantly (and this is very important) when you buy something with an Expected Return of 80% and it goes lower it does NOT MEAN that the 80% return will not materialize. It simply means that before the 80% is realized one will have to stomach looking at a paper loss for some time. The absolutely worst thing one could do is to get “shaken out” of ones position when it heads lower and by doing so not only giving up the 80% of Expected Return from the purchasing level but one is throwing away a possible 140% return from the new (lower) level. This is why I am terrified of selling bottoms because it’s at bottoms when the Expected Return on any security is obviously the highest. 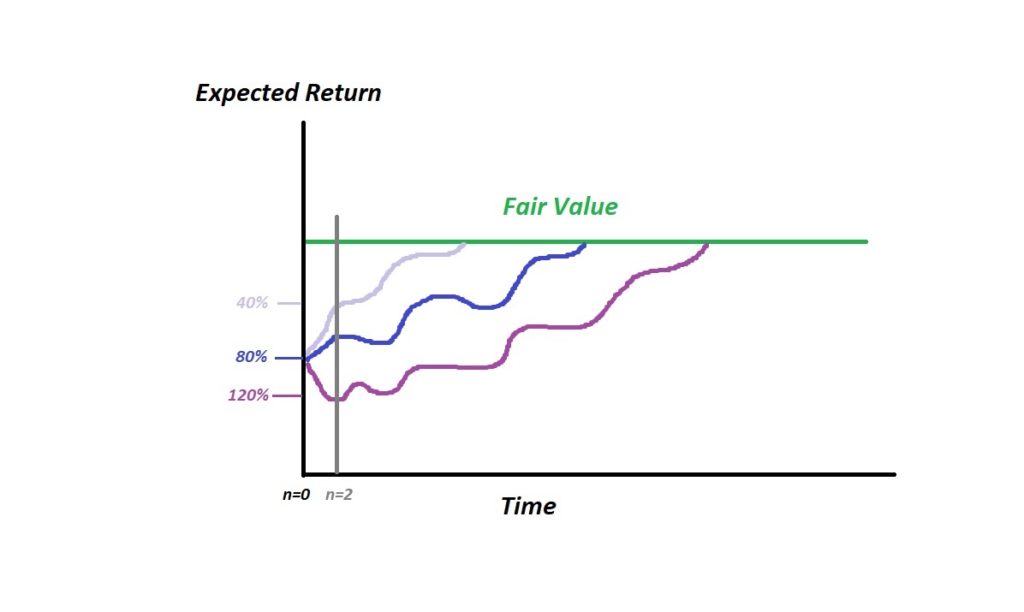 Above  is a chart with three possible trading scenarios for the same security. If I buy at n=0 (today) then no matter what trading pattern will materialize, out of the three possible scenarios, I will see an 80% return before two years have passed. On the other hand if I wait to buy until n=2 out of fear (hope) of the security becoming cheaper still I am risking forsaking an 80% return for a say a 40% return. In other words I was so greedy that I passed on a spectacular return because I was soo greedy that I thought I required to get a nose bleed return.

Again, a purchase can see a 50% drop before it delivers the final 80% return and it would still be a FANTASTIC decision/action to buy it. Only traders or people who don’t know how to invest (95%) actually believe that every good investment will see a green return directly and will have a smooth trend all the way to the promised land. 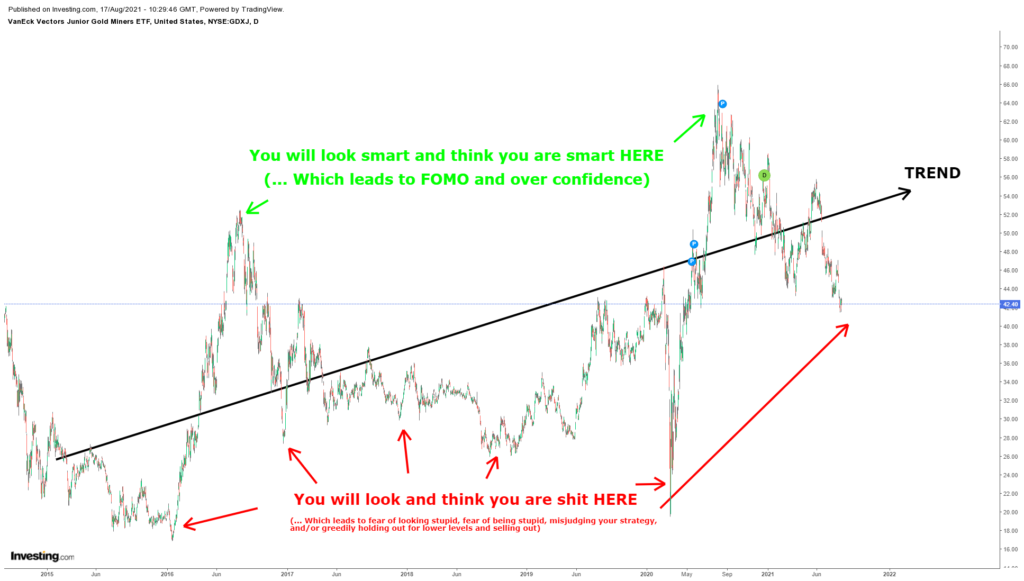 In the chart above one can clearly see that one would easily outperform the market by simply being more aggressive whenever GDXJ was trading under the trend line. Yet no one wants to buy when GDXJ is down and the chart looks horrible. Why? Out of fear of it going lower of course. I don’t know about you but I’m not rich enough to pass on a $1,000 bill because there might be a $2,000 bill down the street.

If one bought every time the majority ridiculed anyone for being in miners then one would have spectacular returns. Do you feel dumb for being in miners right now? Good, it’s probably a good entry. I repeat, 95% of people don’t beat an index so why take investing advice from the masses…? When every idiot think that you are an idiot then you are probably doing something smart!

Retail participation non existent while financings are still flying off she shelf and insider buying has been ramping up (Ross Beaty just bought a lot for example). “Dumb money” out, “smart money” in… Good sign. #Gold #Silver https://t.co/KZiSgQbawe

Note: This is not investment advice.