Daily swings in metals and miners will make you want to buy or sell on impulse.

Daily commentary on stocks across forums and twitter makes you greedy or fearful in the moment.

None of the above should lead to a buy or sell decision.

Try to figure out what the risk/reward is for a particular company over at least 12 months and go from there.

A case usually gets clearer the longer time horizon you factor in.

Knowing if a stock is cheap or expensive based on what the very next material news release might show is extremely hard to figure out.

Eskay Mining (ESK.V) controls 85% of the Eskay Creek district and have more targets than I can count. I have no idea what the next news release will say but I would be surprised if the company does not have at least two material discoveries within 12-24 months (and even more in 36 etc). In light of that I believe the odds are good that I will see a multi bagger in Eskay Mining with TIME. If my time horizon for investing was instead one or two months it would be very hard for me to know if I think I will make money on Eskay from here because there is too much uncertainty in such a short time horizon.

Cabral Gold (CBR.V) has at least 5 rigs operating and is hitting gold all over the place in different targets. In 12-24 months I would be surprised if Cabral hasn’t grown a lot in terms of “inferred” ounces along with the intrinsic value of the company. I have little to no idea how much it might grow or not grow within one or two months however. Again, TIME and a longer time horizon makes the case a lot clearer.

White Rock Minerals (WRM.AX) has some 20 VMS targets at Red Mountain and a lot more gold targets in both Alaska (Last Chance) and Australia (via the Austar merger). I would be surprised if the high grade resource at Red Mountain would not see growth over say two field seasons and the same goes for Australia. I have no idea if White Rock will have grown materially within the next one or two months.

Novo Resources (NVO.V) has more land, projects and targets than any junior I know of. I would be surprised if none of the >20 targets that could be tested over the next 12-24 months would not lead to a material discovery or two. In 36 months and beyond Novo could be a totally different company in a good way. I have no idea of knowing how much Novo could change in a month or two however.

Rokmaster Resources (RKR.V) has continued to hit and hit. Given that the company started out with 2 Moz of AuEQ I think that the “inferred” resource could grow a lot year over year for some years to come. Based on that view the current valuation is ridiculous (insiders obviously agree since they are buying hand over fist). I have no idea of how much Rokmaster could change in one or two months however.

Eloro Resources (ELO.V) is showing that Iska Iska just gets larger and larger with every news release pretty much. As we know economies of scale kicks in and the larger a deposit it the lower the deposit grade can be (not that Iska Iska looks low grade!). There has been a lot of shit talk about arsenic and the way the company’s calculating AgEQ grade but at the end of the day what I think is important is that it is indeed growing every month and the company has yet to find the system(s) limits. In the coming 12 months I think the inferred tonnage will grow a LOT and that the current valuation will look very low in light of that. I have no idea what the very next assay results will be however.

Lion One Metals (LIO.V) is showing that the Tuvatu system and greater Navilawa caldera has a lot more to offer. Again I have no idea what the next news release will say, or how much the company might have changed in one or two months, but I do believe that Lion One will be a lot bigger in 12 months.

I could go on and on about every company I own but I think that the important take away is that every case/stock that I own in my portfolio is held with a lot longer timeframe in mind than the market uses to value companies. The present and the short term is a crowded place to invest but 12 months and beyond is not crowded at all and very few companies are priced based on such a time frame in my opinion. This is very patience and “seeing the future early” leads to an edge. Thus, I don’t care much for short term volatility but instead care a lot about the trend of growth (intrinsic value).

Never forget that 100% of people will have an opinion but somewhere around 95% of said opinions will be worthless from an investing stand point. 95% are focused on the short term and will make judgements about the success or failure of an investment on a daily basis. If every geologist or mining engineer would be so great at mining investing they would be multi millionaire investors and possibly be zippin Margaritas on a beach somewhere. Mining and mining investing are two totally different skill sets.

Every day I read about people believing gold MAY go up or down $30 in the short term. To me as a mining investor this is pretty much useless information. Why? Because there is no margin of safety in trading and I don’t see many people who are exceptionally accurate when it comes to foreseeing short term movements in paper gold. In contrast I can have a pretty good grasp if a company is undervalued or not. The catch is of course that I have no idea when said undervaluation will be rectified… But in my book it is much more valuable to know that you are going to “win” (on average), sometime in the future, than trying to guess where gold is going in the short term. If a company is cheap even if gold was $200 lower than it is today then why on earth would I sell it because someone says there is a 65% chance that gold could go down $30 within two weeks(?).

How do you trade this…? 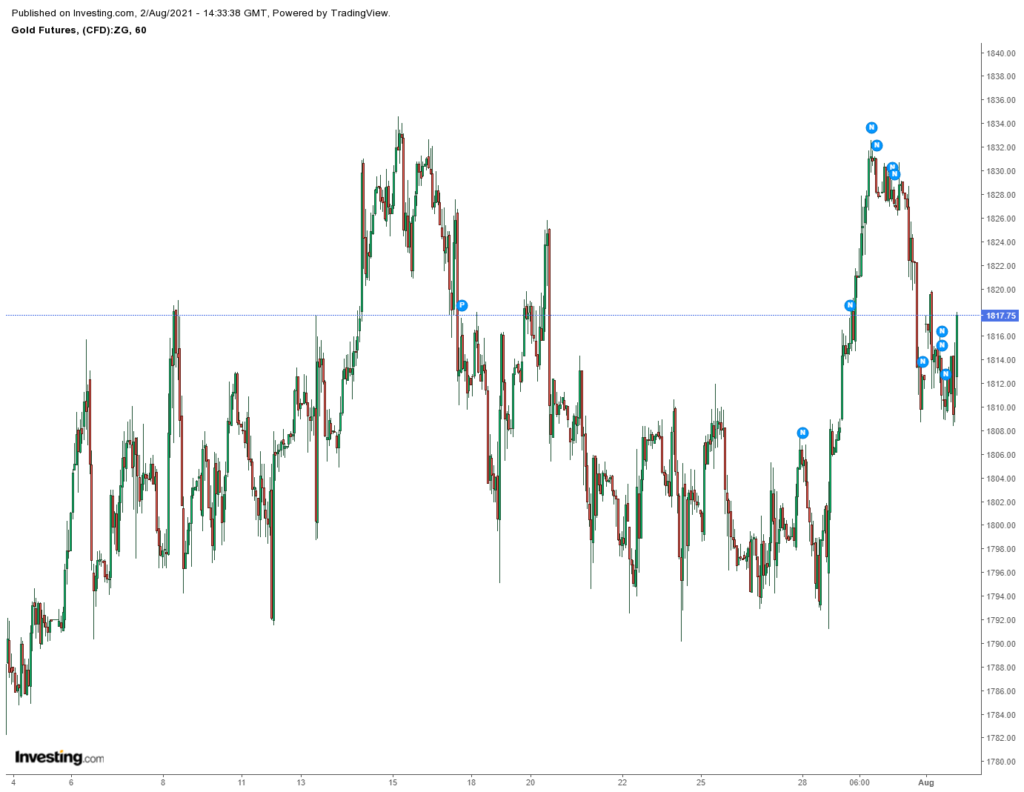 … Why should one even try to care about such volatility and what does it matter to a long term investment case where company fundamentals will drive the value more than the price of gold?

Bashers and the 95% of people who do not beat an index over the long term are usually the loudest on twitter and in forums etc. They invest based on the short term and keep the general discussion on the short term…

Novo bashers harping on about what Beaton’s Creek’s production number will exactly show every month like it says anything at all about the long term value in Novo Resources. New Found Gold was called overvalued all the way from $1/share but the company has been able to show that it has been successful at turning the blue sky potential to reality with the discovery of multiple bonanza grade lenses. Eskay Mining looked expensive at face value when I first got interested but when I really understood the blue sky potential and target diversification then it became a no brainer (I still hold all shares today). 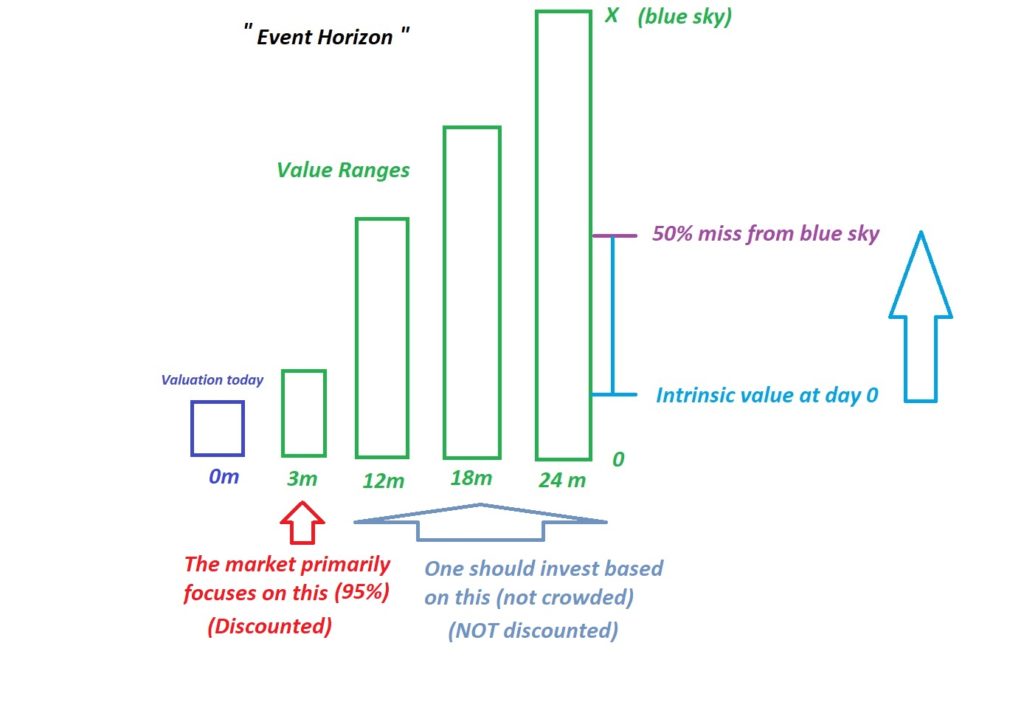 Note: This is not investing advice. Always do your own due diligence. I cannot guarantee the accuracy of this article. Junior miners can be very volatile and risky. I own shares of all the companies mentioned and they are banner sponsors. Thus consider me biased.