Vancouver, British Columbia – TheNewswire – April 13, 2022 – Inflection Resources Ltd. (CSE:AUCU) (CNSX:AUCU.CN) (OTC:AUCUF) (FSE:5VJ) (the “Company” or “Inflection”) is pleased to outline the next series of high-priority copper-gold alkalic porphyry projects to be drill tested in Northern New South Wales, Australia.  The Company is currently preparing to mobilise a drill to test an additional five targets, three of which have not previously been drill tested, and two of which follow-up highly encouraging alteration and geochemistry previously drilled by the Company.

The planned drill program is part of the Company’s ongoing initiative to explore the northern covered extension of the Macquarie Arc, primarily for previously unrecognised alkalic porphyry systems.  All of this next group of targets are fully permitted with drilling expected to recommence in the coming days.

Alistair Waddell, Inflection’s President and CEO, states: “Inflection is committed to systematically explore its 100% owned portfolio of large copper-gold alkalic porphyry targets in New South Wales.  The targets have been generated through the application of leading geoscience and a disciplined, analytical systems-thinking approach utilising the Company’s ever-increasing primary exploration data.  We are excited to drill test this next series of high-priority target areas.”

Duck Creek – EL 8965:  The Duck Creek project is a large alkalic porphyry-related copper-gold style target.  This 4.5 x 5.0-kilometre target area (Figure 1) covers favourable magnetic and gravity features identified by geophysical surveys which the Company interprets to be part of the prospective Macquarie Arc volcanic sequence.  The broad target area comprises a large gravity low embayment within the large regional magnetic high which the Company interprets to reflect the northern extension of the Macquarie Arc.  The Company considers the geological setting highly analogous to the Northparkes mine located approximately 210 kilometres to the south.  Specifically, the Company has identified high amplitude, complex, curvilinear magnetic patterns very similar to those typical of the intrusion-related signatures of the Macquarie Arc mineralized districts.  Furthermore, the target area is marked by a distinct 10 x 15-kilometre gravity low similar to the signature which marks the extent of the Northparkes intrusion complex.  None of the areas the Company plans to drill have previously been tested. 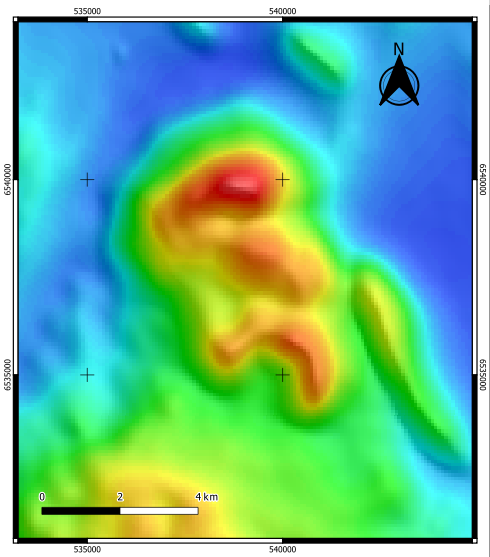 Fairholme – EL 8422:  The Fairholme project is a large alkalic porphyry-related copper-gold style target.  The principal, priority target at Fairholme was scheduled to be drilled in late 2021 but was delayed due to an extended period of unseasonal wet weather.

Fairholme is a large 4 x 2-kilometre target with a deep, low magnetic susceptibility central zone over a deep, high magnetic susceptibility cylindrical body identified by inversion modelling of high-resolution airborne magnetic data (Figure 2).  The target is suggestive of a zone of magnetite enrichment similar to that associated with other porphyry-related copper-gold deposits. 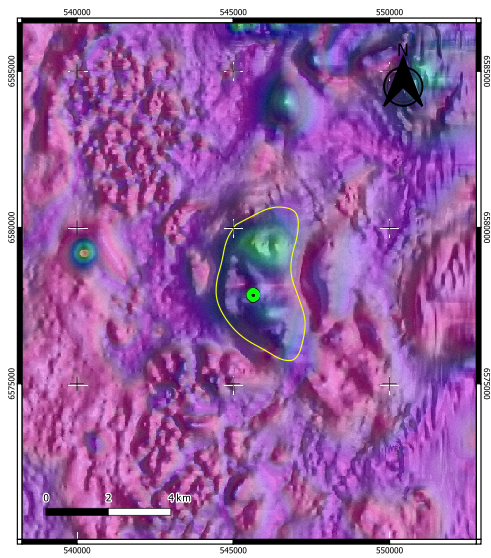 Meringo – EL 8422:  Meringo is a porphyry-related copper-gold target defined from detailed geological interpretation of aeromagnetic data and extensive research into the controls of mineralisation in the exposed parts of the Macquarie Arc.  High resolution, 100-metre spaced aeromagnetic data flown by Inflection over the target area exhibits characteristics interpreted to represent zones of magnetite enrichment and depletion, suggestive of porphyry intrusions at depth below an unconformable sequence of younger limestones (Figure 3).  The interpretation of the aeromagnetic data suggests this target has a signature similar to that manifest above other Macquarie Arc porphyry-related copper-gold deposits.

Previous drilling in the target area did not drill through the cover sequence of post-mineral limestone, leaving the target untested.

Inflection announced on March 4, 2022 that it had received a drilling grant for AUD$98,000 to drill the Meringo target as part of the New Frontiers Cooperative Drilling program from the Government of New South Wales. 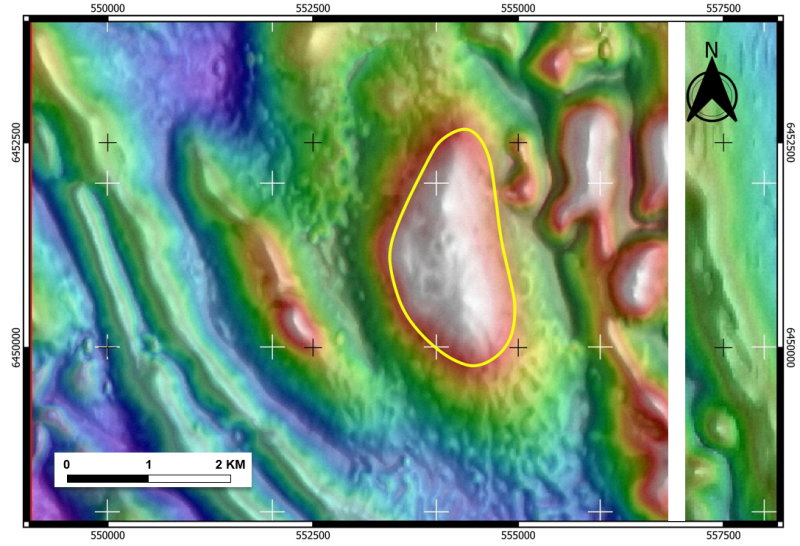 Marra (Canoba) – EL 8695:  The Company plans to drill test the Marra Zirconium-REE target interpreted to have characteristics analogous to the Jurassic aged Australian Strategic Metals (ASX.ASM) Dubbo (Toongi) Project located approximately 180 kilometres to the southeast.  Inflection announced on March 4, 2022 that it had received a drilling grant for AUD$43,120 for the Marra target as part of the New Frontiers Cooperative Drilling program from the Government of New South Wales.

Zirconium and REE’s are considered highly strategic and are in high demand for a range of clean energy and different technologies.  Further details of the Marra target can be found in Inflection news release dated September 23, 2021. 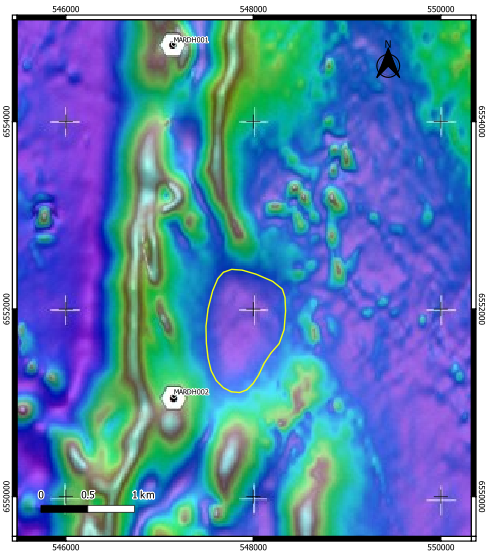 Trangie – EL 8771:  Trangie is a large alkalic porphyry-related copper-gold style target which the Company has tested with a series of shallow penetrating bedrock core holes.  Drilling has returned widespread, favourable potassic-style alteration, manifest by biotite-magnetite, which remains indicative of proximity to an intrusion-related system over several kilometres that the Company considers typical of an alkalic porphyry environment.

Recent ongoing work by Inflection, to assist in vectoring additional drilling, includes a MIMDAS geophysical survey and green rock and sulphur isotope geochemistry studies.  The recently completed MIMDAS geophysical survey (chargeability, resistivity and conductivity) over the southwest side of the Trangie target highlighted a zone of elevated resistivity, although additional modelling is required to fully understand the significance of these features.

Analysis of drill core taken from the Trangie target area suggests the presence of multiple hydrothermal alteration cells at the district scale.  Alteration intersected at Trangie is confirmed as a strong hydrothermal signature with a distinct porphyry affinity and trace element enrichment similar to that observed around the mineralised Cadia and Northparkes districts.

Drilling will focus on the south-west of the project which green rock, sulphur isotope, geochemical, geophysical and hydrothermal alteration data have vectored towards an area of specific interest (Figure 5). 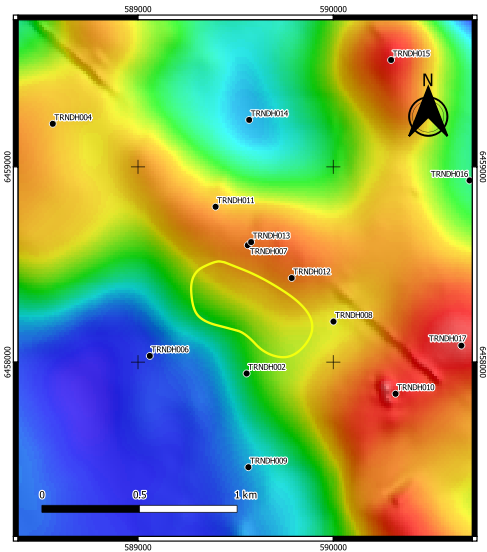 The scientific and technical information contained in this news release has been reviewed and approved by Mr. Carl Swensson (FAusIMM), a “Qualified Person” (“QP”) as defined in National Instrument 43- 101 – Standards of Disclosure for Mineral Projects.

Mud rotary drilling will be utilised to drill through the post-mineral, sedimentary cover sequence.  At the unconformity the drilling method will changed to diamond drilling using NQ–sized core.  All materials and core will be transported to the Company’s Trangie field office at the end of each shift.  The core will be logged in detail then cut in half to the Company’s specified sample intervals with half core samples placed in numbered calico bags with internationally certified blanks and standards inserted every 20th sample.

Samples are to be sent to ALS Laboratories in Orange NSW.  ALS Laboratories are an accredited analytical laboratory meeting ISO/IEC 17025:2005 and ISO 9001:2015.  Samples will be prepared by crushing and grinding via ALS methods CRU-21 and PUL-32 respectively.  The pulps will be then assayed for 48 elements via ALS method ME-MS61 using a 25g sample after a four acid near total digest with an ICP-MS finish.  Gold is to be assayed by fire assay using ALS method Au-AA23 using a 30g sample charge and AAS finish.  Laboratory standards and QA-QC are monitored by the Company.  Coarse rejects from the sample preparation are subjected to short-wave infrared spectral analysis.

The Company is exploring for large copper-gold and gold deposits in the northern interpreted extension of the Macquarie Arc, part of the Lachlan Fold Belt in New South Wales.  The Macquarie Arc is Australia’s premier porphyry gold-copper province being host to Newcrest Mining’s Cadia deposits, the CMOC Northparkes deposits and Evolution Mining’s Cowal deposits plus numerous exploration prospects including Boda, the recent discovery made by Alkane Resources.

For more information, please visit the Company’s website at www.inflectionresources.com.

This news release includes certain forward-looking statements and forward-looking information (collectively, “forward-looking statements”) within the meaning of applicable Canadian securities legislation. All statements, other than statements of historical fact, included herein including, without limitation, statements regarding future capital expenditures, anticipated content, commencement, and cost of exploration programs in respect of the Company’s projects and mineral properties, and the anticipated business plans and timing of future activities of the Company, are forward-looking statements. Although the Company believes that such statements are reasonable, it can give no assurance that such expectations will prove to be correct. Often, but not always, forward looking information can be identified by words such as “pro forma”, “plans”, “expects”, “may”, “should”, “budget”, “scheduled”, “estimates”, “forecasts”, “intends”, “anticipates”, “believes”, “potential” or variations of such words including negative variations thereof, and phrases that refer to certain actions, events or results that may, could, would, might or will occur or be taken or achieved. Forward-looking statements involve known and unknown risks, uncertainties and other factors which may cause the actual results, performance or achievements of the Company to differ materially from any future results, performance or achievements expressed or implied by the forward-looking statements. Such risks and other factors include, among others, statements as to the anticipated business plans and timing of future activities of the Company, including the Company’s exploration plans. the proposed expenditures for exploration work thereon, the ability of the Company to obtain sufficient financing to fund its business activities and plans, delays in obtaining governmental and regulatory approvals (including of the Canadian Securities Exchange), permits or financing, changes in laws, regulations and policies affecting mining operations, the Company’s limited operating history, currency fluctuations, title disputes or claims, environmental issues and liabilities, as well as those factors discussed under the heading “Risk Factors” in the Company’s prospectus dated June 12, 2020 and other filings of the Company with the Canadian Securities Authorities, copies of which can be found under the Company’s profile on the SEDAR website at www.sedar.com.