“The addition of a new western gold target with 600 metres of strike length in the Orogrande Shear Zone reinforces our confidence that the Baner Project has a scale and scope that will lead to the identification of a large gold system,” stated President and CEO, Jonathan Buick. “The details of our 2021 field program will be announced later in the second quarter.”

There were very encouraging assays in the soil samples collected in October 2020. The gold values in the soils range from below detection limit (3 ppb) to a maximum of 1,080 ppb (1.08 ppm). Nine soil samples assayed greater than 100 ppb gold, all occurring within approximately 150 meters of the interpreted western boundary of the Orogrande Shear Zone (OSZ). The sample hosting the highest gold value of 1,080 ppb is located directly along the interpreted trace of the shear zone (Figure 1). These strong gold values, taken together with historic soil data and rock chip samples, indicate a northwesterly linear trend having a strike length of approximately 600 metres, apparently associated with the western margin of the OSZ.

Silver and base metal enrichments associated with gold mineralization are characteristic of the Elk City Mining District. Soil samples from the Angel Zone yield anomalous silver and copper.

The regional-scale Orogrande Shear Zone (OSZ) hosts widespread gold mines which were active in the late 19th and early 20th centuries that comprise the Elk City and Orogrande Mining Districts. The Friday Mine, one such historic gold mine 8 km south of the Baner Project, has been reopened by Endomines AB and is currently producing gold from a published measured plus indicated resource of 462,000 tonnes grading 6.54 g/t gold (Endomines AB Annual Report 2019).

Exploration core drilling at Baner in 2018 and 2020 by Idaho Champion has concentrated along the eastern boundary of the OSZ, yielding significant gold mineralization in both near-surface oxide and deeper quartz-sulfide intercepts (news releases dated 30 November, 2018; 9th, 16th, 22nd March, 2020). However, property-wide exploration has been ongoing including evaluation of isolated anomalous gold values reported in historic soil and rock geochemistry surveys. One such occurrence near the western edge of the Baner claims consisted of 4 closely spaced gold-anomalous soil samples (Figure 2), which were corroborated by previously completed rock sampling. This location, now known as the Angel Zone, is the first defined exploration target along the western margin of the OSZ within the Baner Project.

Work completed at the Angel Zone by Idaho Champion in 2018 and 2020 includes:

The patterns in the soil geochemistry from the Angel Zone soil survey suggest a north to northwest trending mineralized structure near the western boundary of the OSZ. It is unclear how this structure fits with the shear zone boundary, but it could represent a dilational jog in the bigger structure, accounting for local concentrations of gold and other elements in the soil. This structure may also be the southern continuation of the Lucky Strike Zone described by Premium Exploration in their technical report dated 30 April 2013. As such, it represents a separate, parallel, and underexplored zone from the significant gold mineralization intersected by Idaho Champion drill holes near the eastern margin of the OSZ. Further work along the western boundary of the OSZ is warranted and is a priority for the Baner Project in 2021. 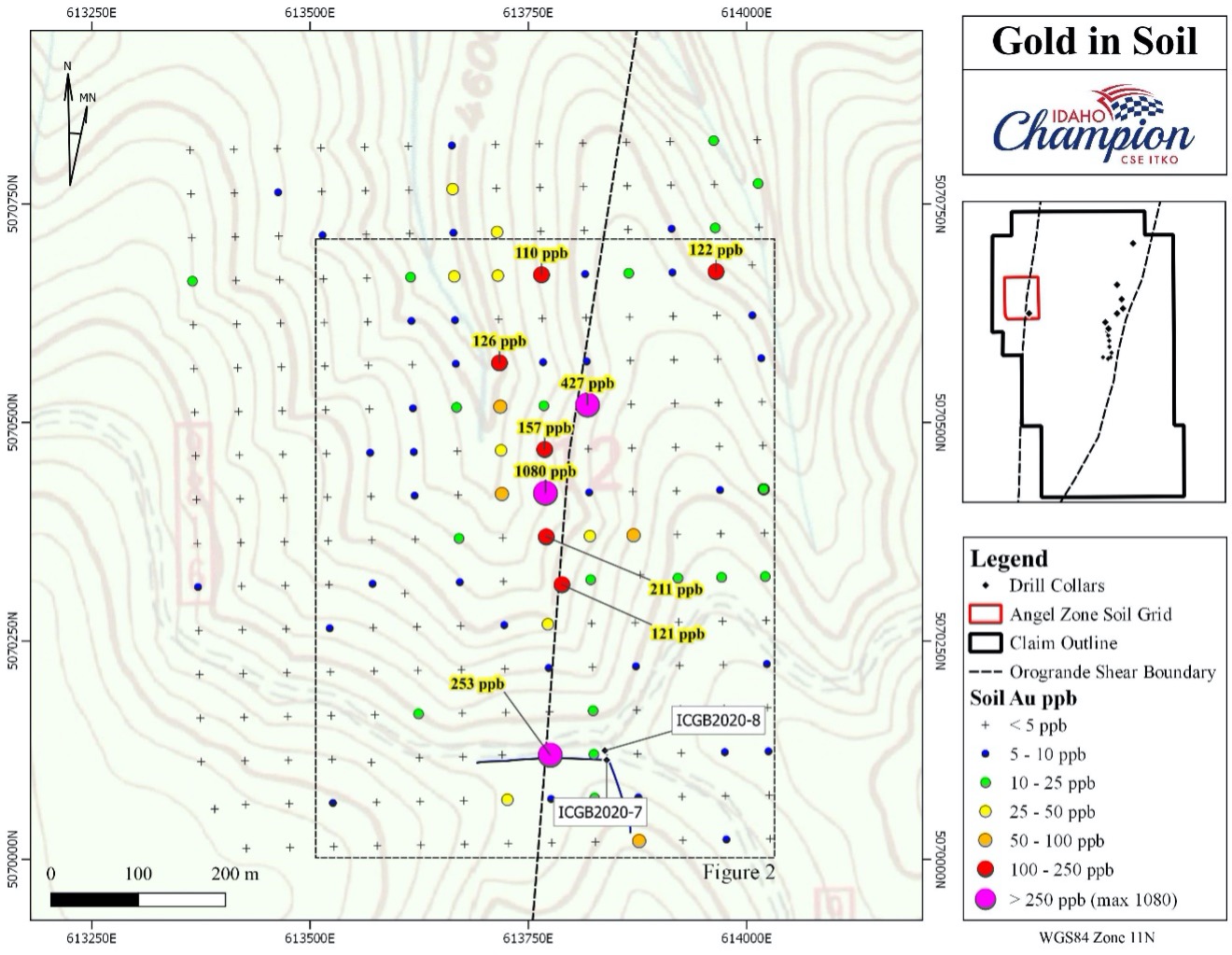 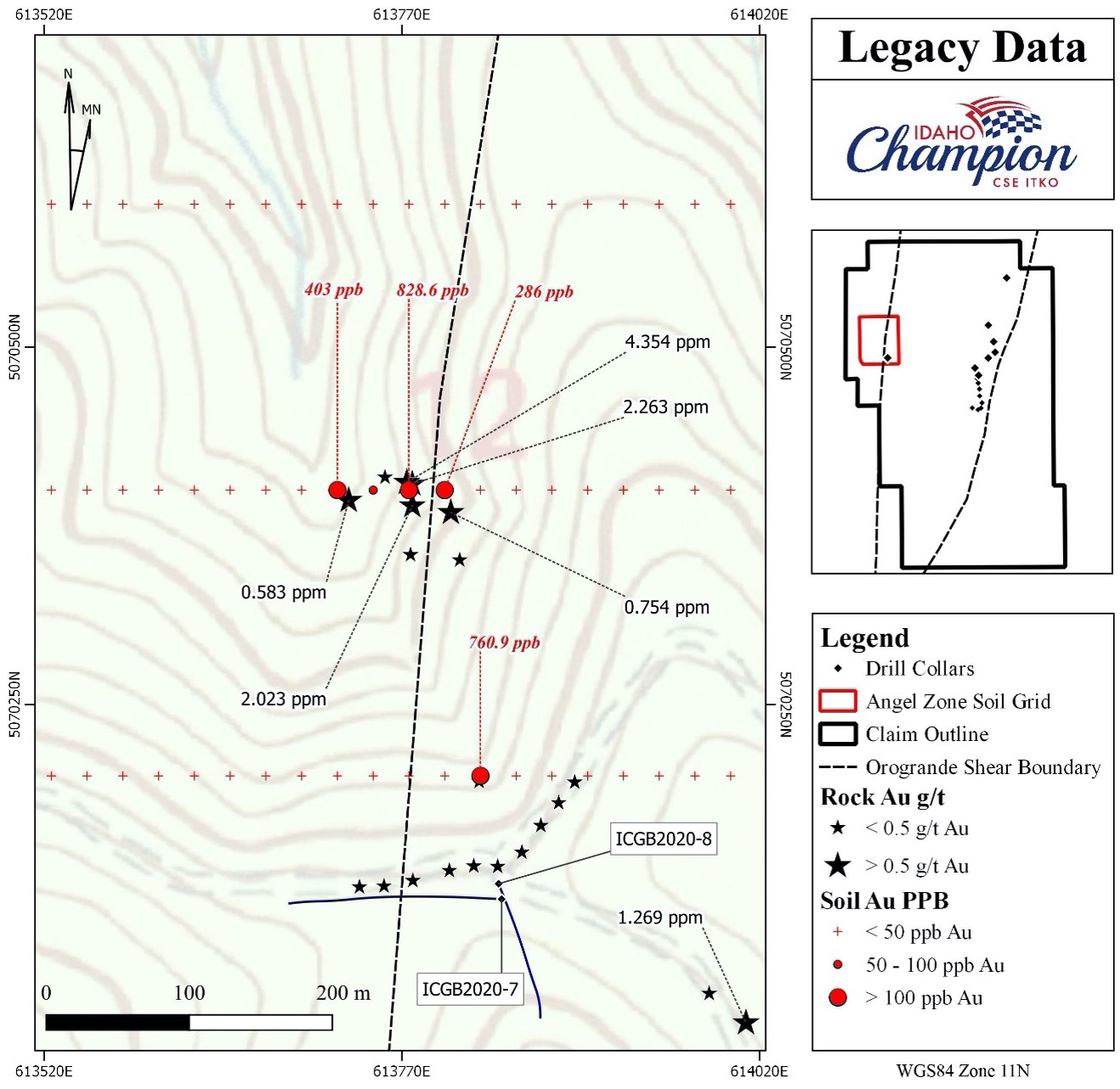 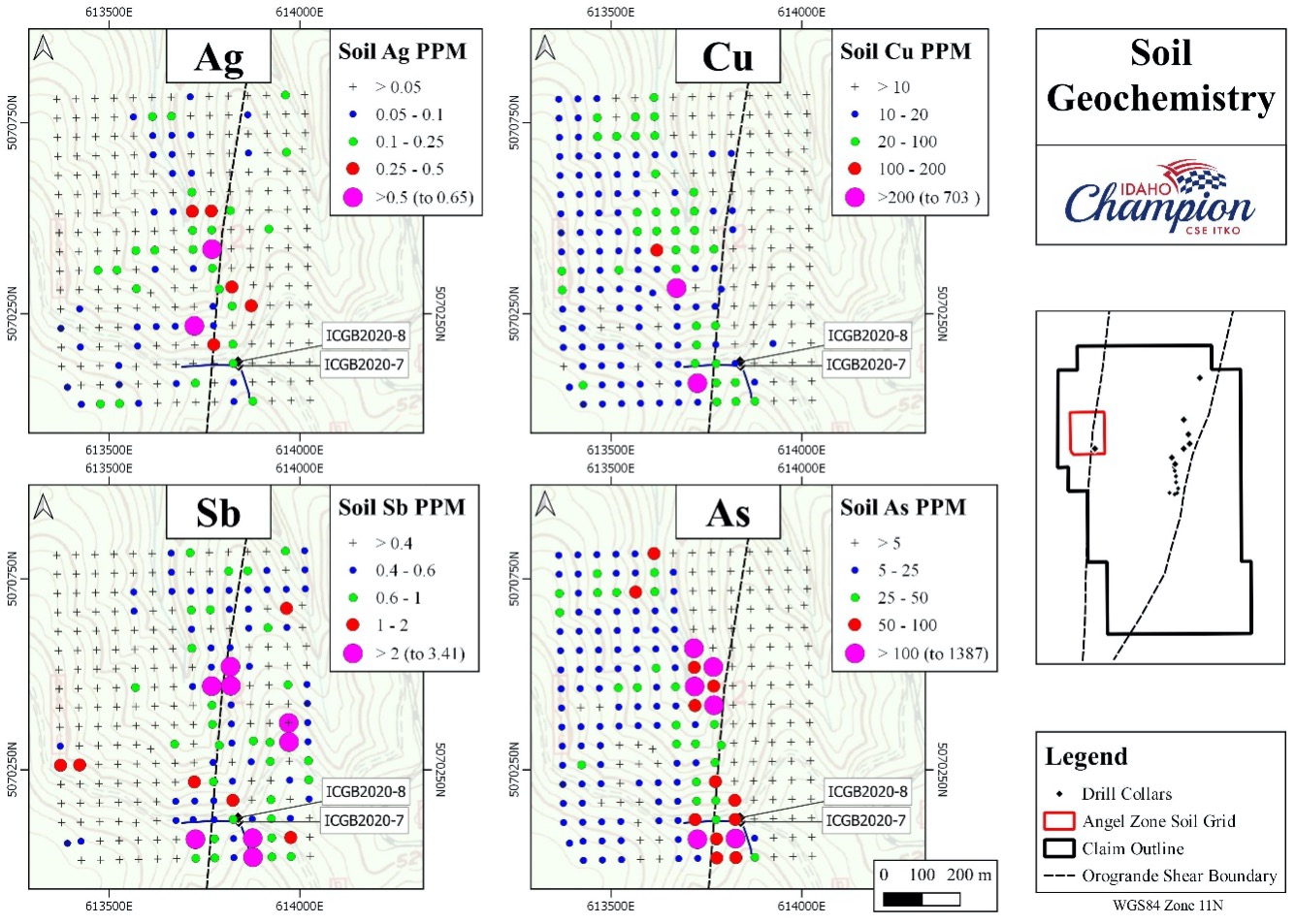 Quality Assurance/Quality Control (QAQC) blanks and standard pulps were blindly inserted into the sample stream and lab performance was validated by company geologists.

About the Baner Project

The Baner Project is located within the Orogrande Shear Zone (OSZ), a 20-kilometre long and up to 1-kilometre wide regional shear zone located in Central Idaho. The OSZ is a transpressional shear zone composed of metamorphosed Proterozoic sedimentary rocks of the Belt Supergroup and granitic rocks of the Cretaceous Idaho Batholith, which is intruded by Tertiary rhyolites and dacitic dikes. Hydrothermal alteration is spatially associated with the OSZ consisting of: silicification, sericitization, and chloritization. Different types of mineral systems occur in the OSZ and along sympathetic structures in the area, most likely of Cretaceous or Tertiary ages. Mineralization may include disseminated bulk-mineable precious metal mineralization associated with sheeted or stockwork veins, hydraulic breccias and with extensive widespread alteration; but high-grade gold also occurs within discreet structurally controlled quartz veins and silicified zones.

The Baner Project is located 8 kilometers southwest of Elk City, Idaho, in the heart of the historical Orogrande-Elk City Mining District. Elk City is an historic gold mining region dating back to the 1860s that once supported more than 20 underground mines and extensive placer operations. During the 1930s there were three cyanide mills along the Crooked River processing open pit and underground sulfide ore. Exploration in the district was conducted by Cyprus Amax, Kinross Gold, and Bema during the 1980s and 1990s.

Premium Exploration conducted extensive soil sampling, airborne and surface geophysics, and drilling during the period around 2010. In 2020, Endomines AB brought the Friday Gold Project into production based on a reported measured plus indicated resource of 462,000 tonnes grading 6.54 g/t gold and mined 6,600 tonnes of ore with a 3.52 g/t head grade (Endomines AB Annual Reports for 2019, 2020). The Friday Gold Project is located within the OSZ approximately 8 kilometres south of the Baner Project.

The technical information in this press release has been reviewed and approved by Peter Karelse P.Geo., a consultant to the Company, who is a Qualified Person as defined by NI 43-101. Mr. Karelse has more than 30 years of experience in exploration and development.

Idaho Champion is a discovery-focused gold exploration company that is committed to advancing its 100%-owned highly prospective mineral properties located in Idaho, United States. The Company’s shares trade on the CSE under the trading symbol “ITKO”, on the OTCQB under the trading symbol “GLDRF”, and on the Frankfurt Stock Exchange under the symbol “1QB1”. Idaho Champion is vested in Idaho with the Baner Project in Idaho County, the Champagne Project located in Butte County near Arco, and four cobalt properties in Lemhi County in the Idaho Cobalt Belt. Idaho Champion strives to be a responsible environmental steward, stakeholder and a contributing citizen to the local communities where it operates. Idaho Champion takes its social license seriously, employing local community members and service providers at its operations whenever possible.

ON BEHALF OF THE BOARD

For further information, please visit the Company’s SEDAR profile at www.sedar.com or the Company’s corporate website at www.idahochamp.com.