Just thoughts I would do a short article with some thoughts on the latest developments from Novo Resources, Cabral Gold and Eskay Mining…

As I had expected, Novo has been dropping cluster bombs of news lately, in the wake of the Millennium deal being wrapped up. I take this as a pretty clear signal that most, if not all, ducks are finally in a row…

Between September 9 and September 24 Novo has come out with no less than 7 news releases which can all be accessed HERE.

The two latest news releases had to do with GBM’s “Malmsbury Project” and Kalamazoo Resources’ “Queens Project”. As many already know, Novo had an option on GBM’s Malmsbury Project which is located south-west from the Fosterville mine in the Bendigo Zone, Victoria, Australia. I take this new option on the neighboring “Queens Project” as a sign that the Novo team/QH really believes that there might indeed be a Fosterville look alike hiding in that area. 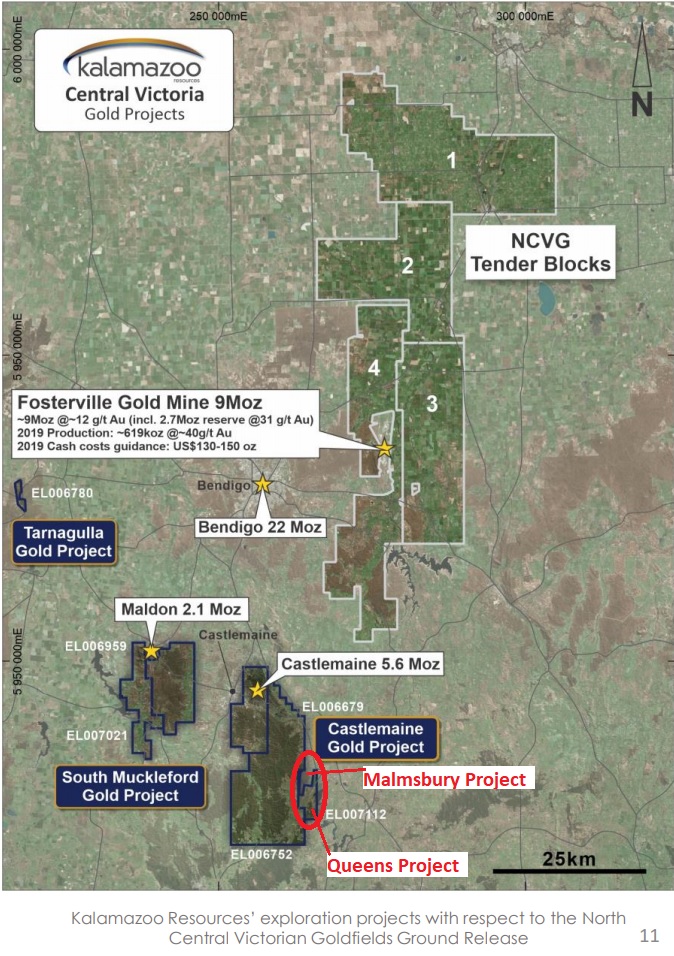 As I have been saying for quite some time: Do not confuse lack of NRs with lack of things getting done. The 70+ people employed by Novo have not been sitting idle for the last couple of months. Thus I believe that this is just the start of a longer “cluster bomb” campaign. 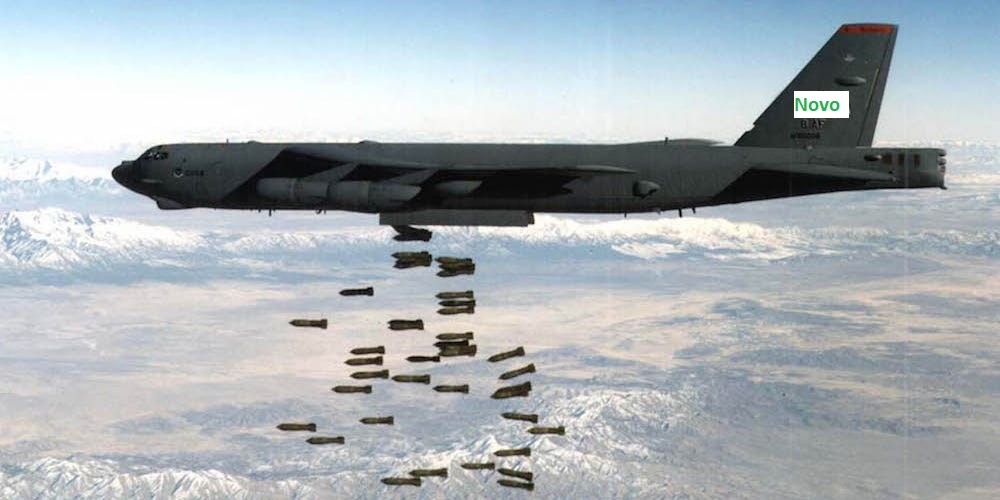 I am still expecting more news from Egina, ore sorting, Karratha and a number of different battleships in the Novo convoy (which is much larger than I can fit in the picture below): 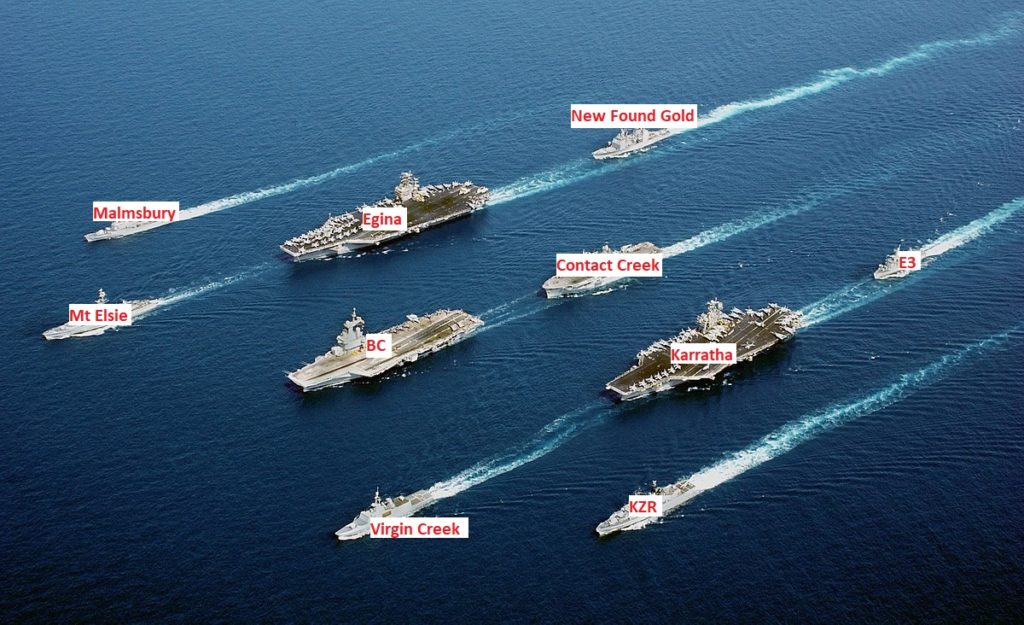 The market might only be able to keep one project in mind at any one point in time but it’s an investor’s job to make a well thought out decision based on all moving parts (even though one can’t keep them all in the front of ones head every second). Trust and act on your Due Diligence not your current impulse.

Eskay Mining seems to be on to something quite large up in the Eskay Creek area in BC, Canada…

Snippets from the NR:

I would recommend reading the whole NR because it is packed with interesting information.  My take is that it looks like the TV/Jeff system might be a big one and it’s just one of many areas that Eskay Mining plan on testing. The best part is that we only need one good deposit(s) to see Eskay Mining become a real success. In other words I see this as a very encouraging start. Or in the words of Quinton Hennigh:

“Now that we have confirmation of a large, stacked, mudstone-hosted system, we plan to aggressively drill this area to see if we can vector in on the high grade core of the system. Two rigs are now on site. We plan to hit this hard the remainder of the current field season, but also be prepared to return here in 2021 to follow up on what looks to be a discovery in the making”

I was quite surprised to learn that they are actually bringing in a second drill rig THIS field season already because I was personally expecting this field season to be pretty close to being wrapped up already. I take that as a very good sign in terms of the Eskay Mining team’s confidence level in regards to TV/Jeff!

And I think this slide pretty much sums it up: 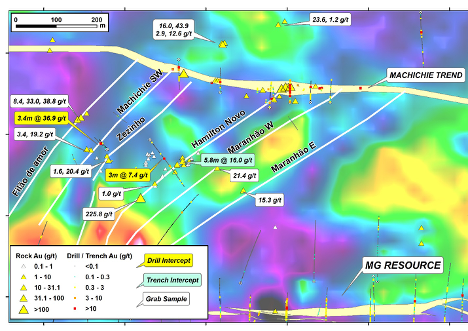 The Machichie SW target area of the Cuiú Cuiú district is located between the E-W trending MG deposit, which currently contains an Initial Inferred Resource of 8.6Mt @ 1.45 g/t gold (400,000oz), and the recently discovered Machichie zone, which is a parallel E-W trending zone located approximately 500m north of the MG deposit.

Prior to 2019, a surface trench in the area cut 5.8m @ 16.0 g/t gold and a single drill hole below the trench intersected 3.0m @ 7.4 g/t gold. This occurrence was never followed up. In early 2019, however, a single hole was drilled 125m to the west of the initial hole and cut 3.4m @ 36.9 g/t gold. At the time, it was not known whether this was the western extent of the Machichie structure, which had been faulted to the south, or a separate structure.

Recent mapping by Cabral Gold’s geologists has not only concluded that the two occurrences described above are related to two separate NE trending veins, but four additional NE trending veins have also been recognized further east, none of which have been previously drill tested. These clearly form part of a high-grade vein array and are shown in Figure 1.

Details regarding each vein structure from west to east are as follows:

As I had thought/hoped there just seems to be a truckload of gold bearing structures in the Cuiú Cuiú district. And remember that this area is just a small part of Cabral Gold’s total land package. Cabral is already up over 200% since I made the comment that I thought the company would be one of the best performing juniors this year. So far so good. The key thing is that this NR just enforces my belief that Cabral should have a LOT of growth ahead. Said growth should be even faster now given that the company also announced that they are bringing in a second drill rig…

Or in the words of Alan Carter:

“These new veins are significant because they occur between the MG deposit and the new Machichie zone (which we drilled in 2019) and they appear to have very high grades. Adding a second rig will allow us to double the news flow and drill 2 targets simultaneously.”

… Simple enough! Steady as she goes!

Note: This is not investment advice. Always do your own due diligence. I own shares of all companies mentioned and all are banner sponsors of The Hedgeless Horseman. Thus, assume I am biased.