In this article I will discuss Aloro Mining Corp which is a junior gold exploration company located in Mexico. The company holds a claim block that is sandwiched between Agnico Eagle and Alamos Gold in the famous Mulatos district.

The company recently presented the results from the first drill campaign ever on the property, on the first of many targets, and saw a sell off (probably) primarily because there were no bonanza hits on the first go. The shares have traded down to $0.10 from a high of about $0.23 and the market cap currently sits at C$4.65 M (Management owns about 50% and Agnico Eagle owns 8.7%). I bought shares (prior to first assays) between $0.14-$0.22 and increased my position by approximately 30% during this pull back, simply because I don’t think the story ends just because they did not hit some real head turners on the first go (and I doubt Agnico Eagle invested on a one off “fire and forget” basis).

Contrary to perhaps most, I did not expect any bonanza hits on there first few holes, but I was cautiously optimistic in regards to them hopefully finding signs of there being a mineralized system(s) in the area. This they did, and particularly one deep step out hole coupled with new geological mapping made the NR very interesting in my opinion.

First off, here are the assay results: 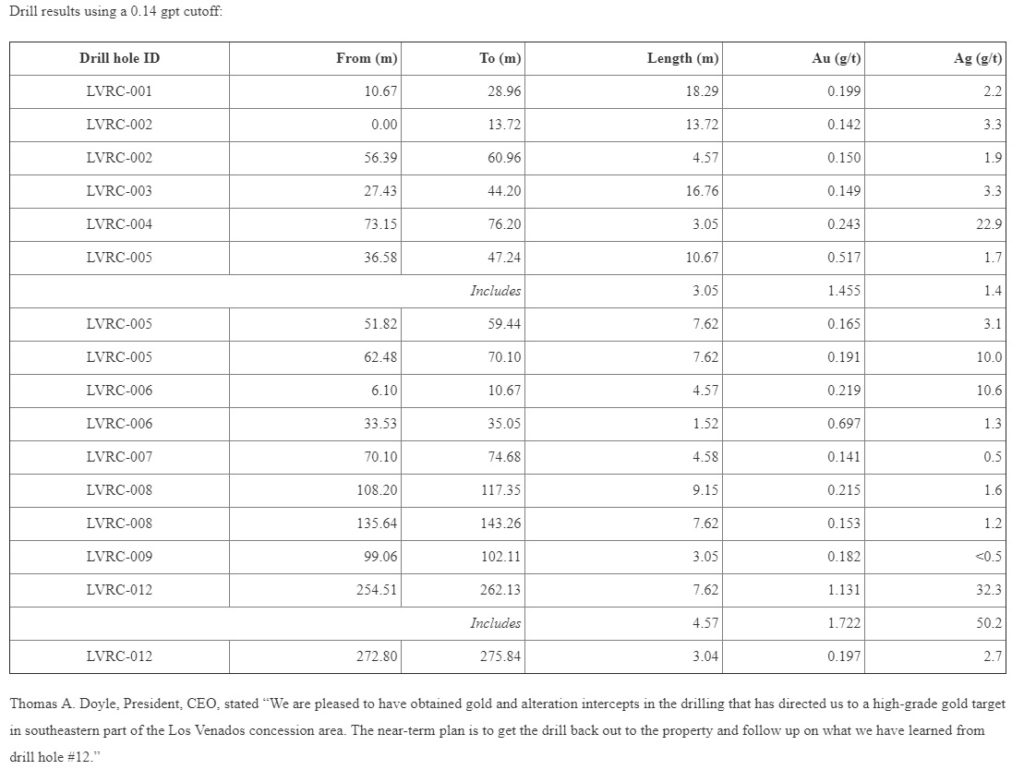 … Holes #1 to #11 were shallow holes that tested the low hanging fruit in terms of a potential near surface high sulphidation system centered around a felsic dome complex. The first 11 shallow holes did not hit economical gold intercepts (although anomalous), but the deep #12 hole that was collared much closer to Alamos Gold’s (Mulatos Mine) border, was much more interesting: 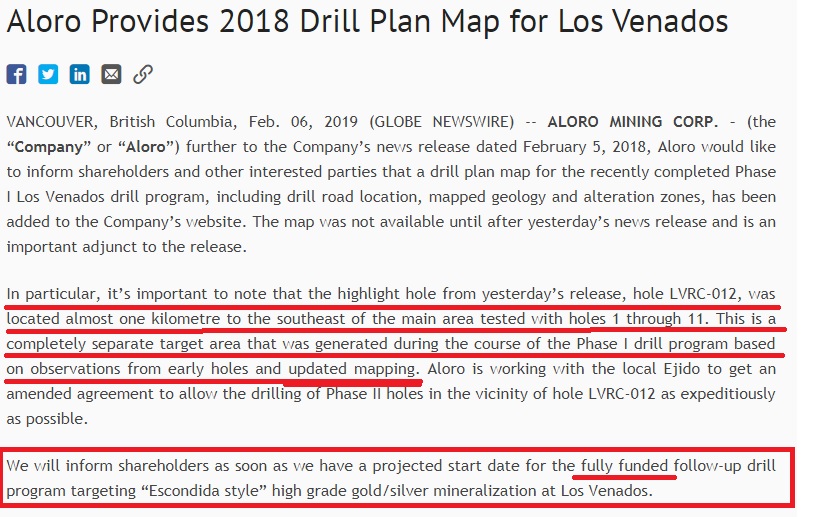 In my opinion, the key takeaway is that; the best results came from a 1km blind “step out” hole in a “completely seperate target area that was generated during the course of the Phase 1 drill program based on observations from early holes and _updated mapping_“.  This means that Aloro’s geological expert on Mulatos style mineralization (Ken Bellewag) saw something he obviously liked from the incoming geological information and formed a hypothesis. This was thus followed by a real “wild cat hole” that just happened to hit the best intercept… This sort of stuff is what I love to see, and given that they decided to push for a follow up drill campaign centered around that very hole, I guess they feel like they might be on to something.

Mapping of the south-eastern parts of the claim block found in the first pass Field Report: 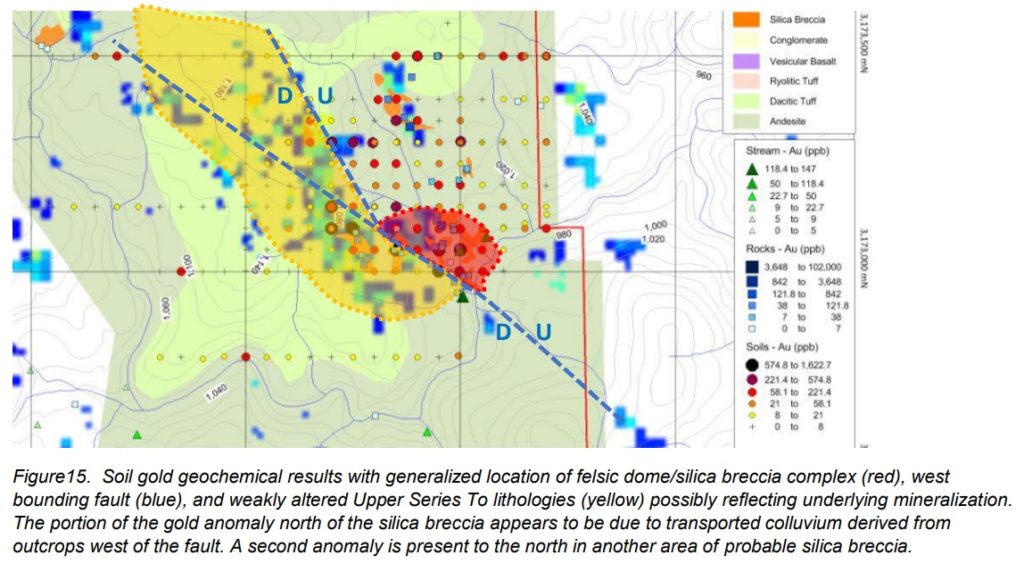 This is the geological map that was released shortly after the drill results (and what helped guide their deep hole): 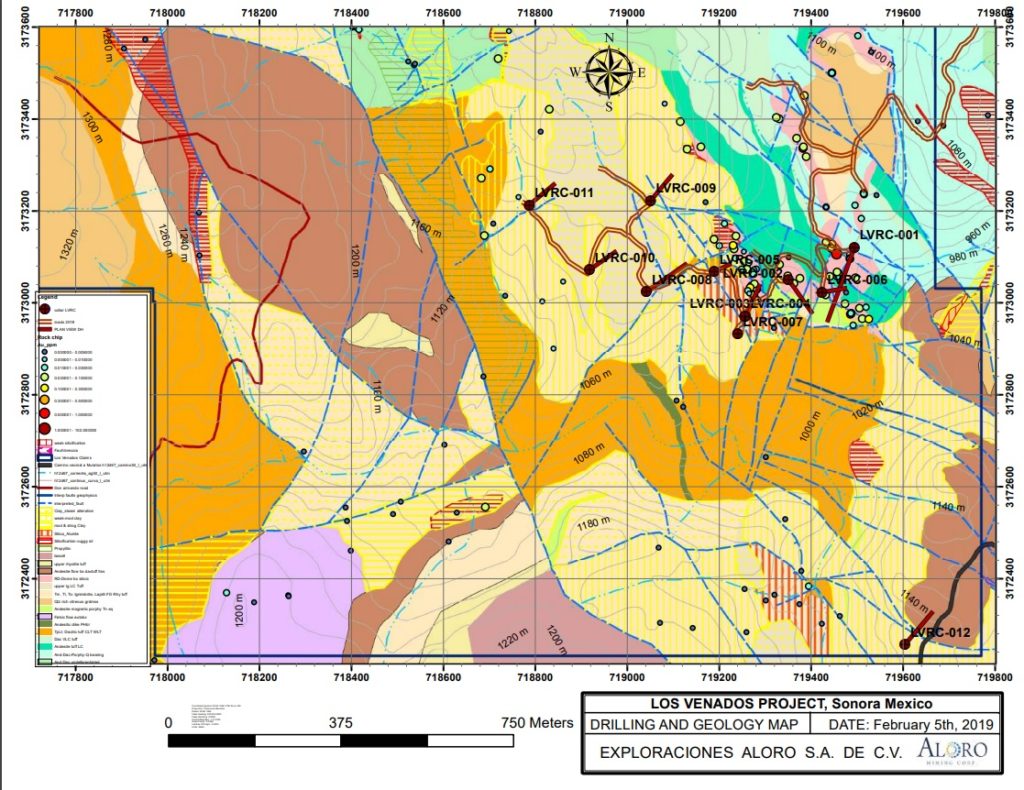 … Note how much more information they have now, and note the red horizontally striped areas.

Zoomed in (red and black circles/arrows/lines added by me). Source: Aloromining.com

… Note the geological description “Silicification-vuggy sil” and then read the following comments by the “Mulatos expert” Ken Belleweg: 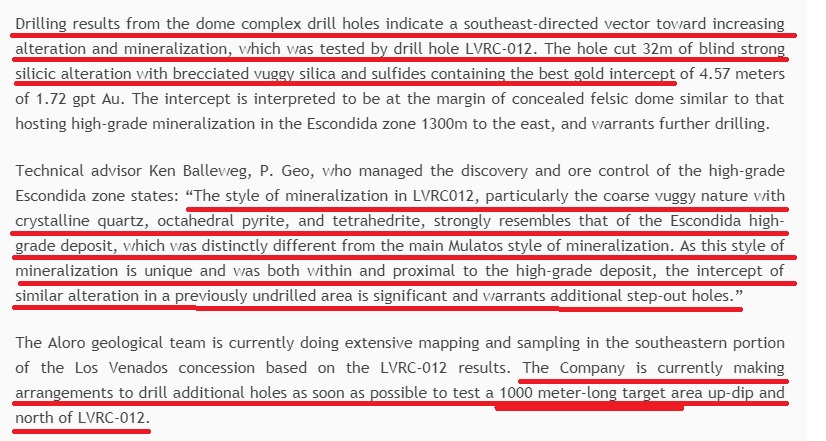 … Basically it means that the “wild cat” hole #12 hit mineralization that “strongly resembles the Escondida high-grade deposit”, which is the exact target type that they are in fact hunting. This has thus led Aloro to decide on testing a 1,000 meter-long target area as soon as possible, based on the current hypothesis that they hit “the margin of a concealed felsic dome” . Furthermore, the new geological map (two slides up) show new areas where “silicification-vuggy sil” has been mapped. I’m no geo but I interpret it as a big positive in light of this slide from Alamos Gold: 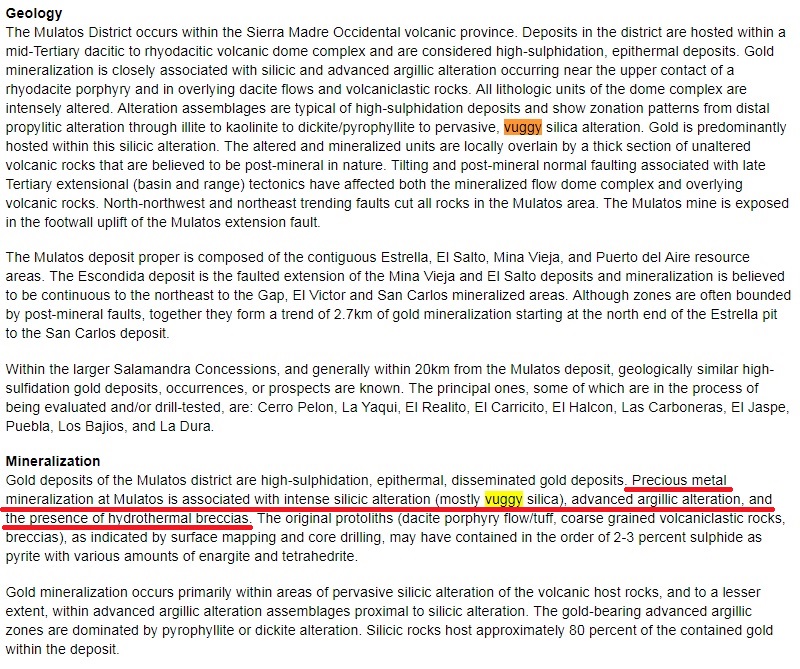 Now, lets go back and look at the new geological map again, with the Vuggy Silicification and the two best drill intercepts highlighted: 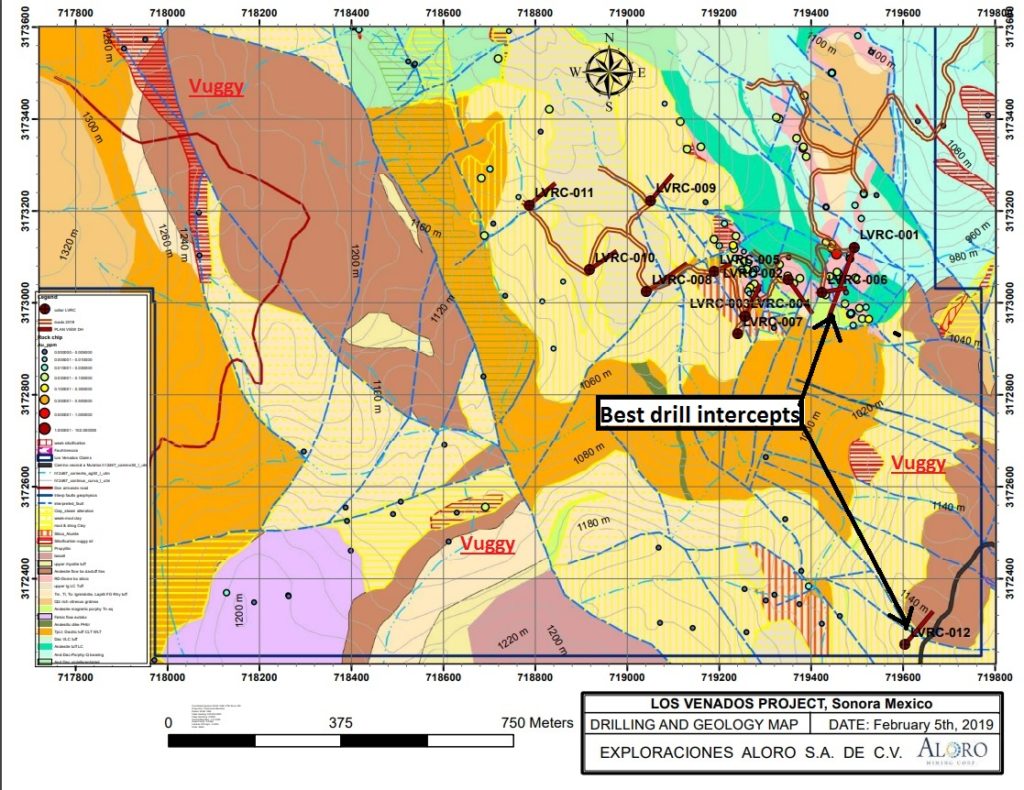 … If I understand it correctly, the priority follow up target is the circa 1,000m space between drill hole #1 and drill hole #12. In between said drill holes there seems to be some vuggy silicification that is surfacing. One can also see that there has been more vuggy silicification mapped to the west and north-west. Now, the map above only covers the very south-eastern tip of Aloro’s concessions in the area as can be seen in the following slide: 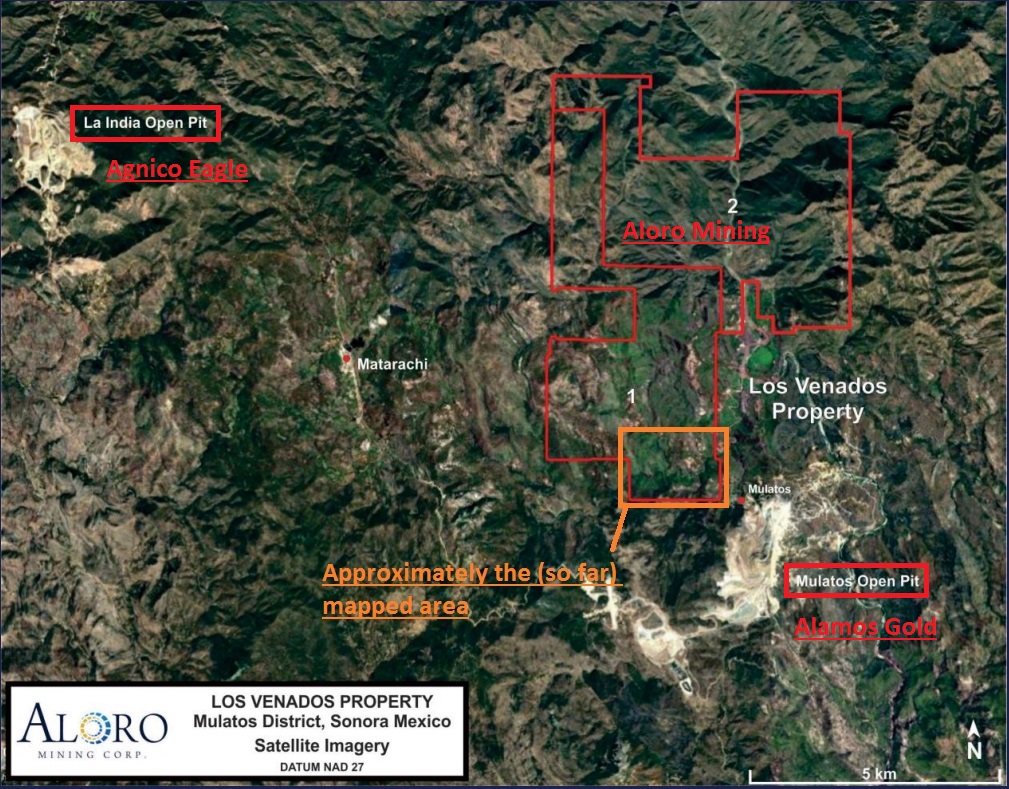 Aloro’s claim block is obviously in a very good neighborhood, given that it is firmly cemented between two producing mines. Also note that the two best drill intercepts were collared at the very edge of the claim block, only a stone throw away from the Mulatos open pit. As a matter of fact, it is theorized that faulted extensions of the Mulatos deposit are likely, but were thought to be too deep to warrant hunting for them. With that said, Ken Belleweg is open to the possibility that this assumption might be false: 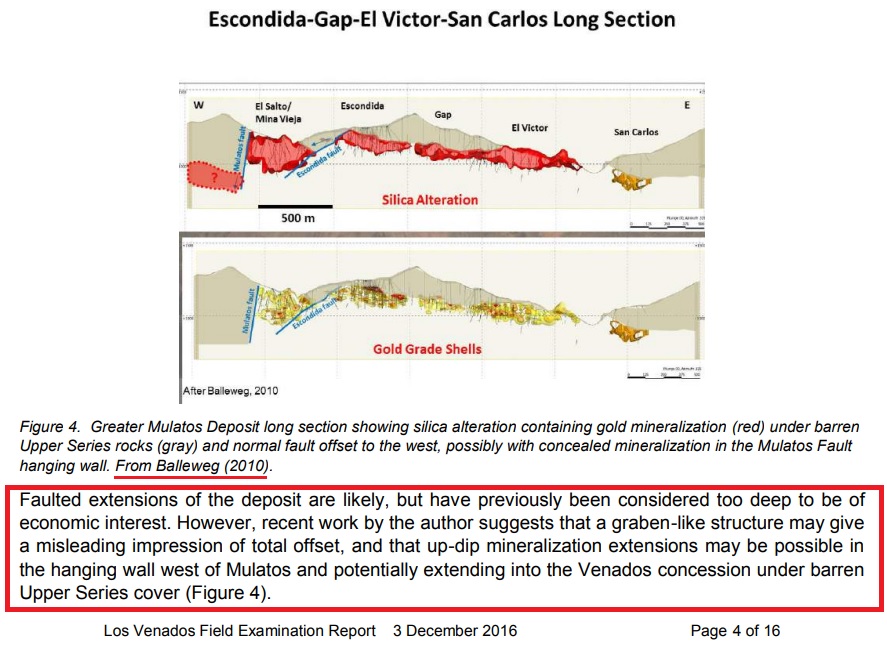 … keep in mind that the one who came up with the theory (Ken Belleweg) spent 16 years working on the Mulatos deposit and the geology of the Mulatos district. Maybe they indeed nipped the tail of some faulted extensions of the “Greater Mulatos Deposit”.  This theory coupled with the best intercepts being located closest to the Mulatos (and the Escondida zone) might further explain the decision to prepare for a follow up drill campaign as soon as possible.

We also got this encouraging tidbit from the drilling results NR:

… In context of the Mulatos deposit: 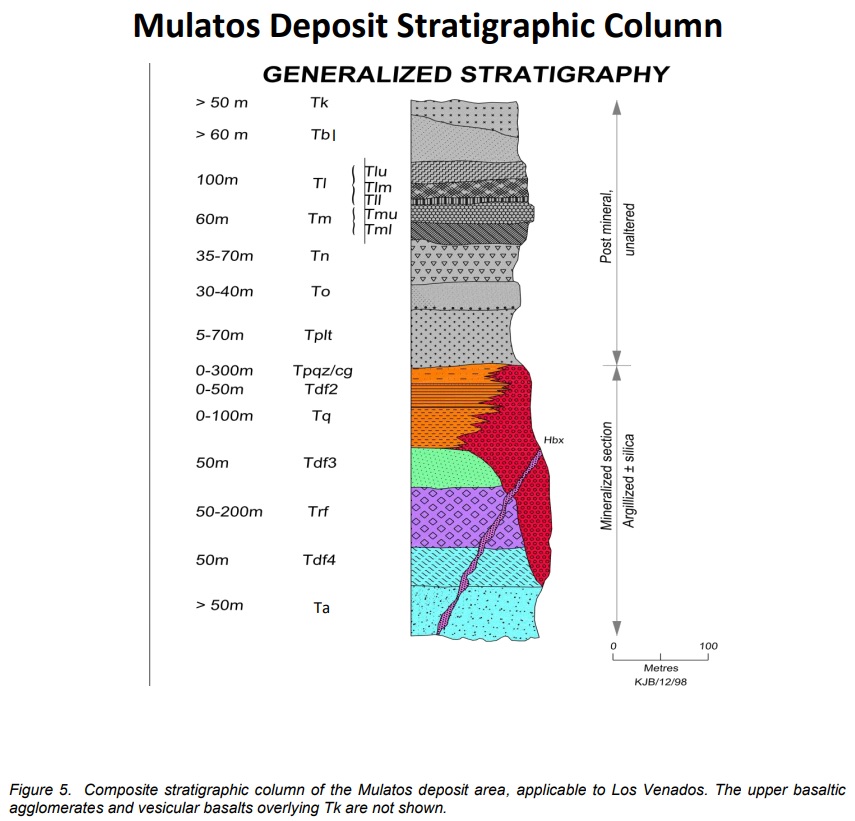 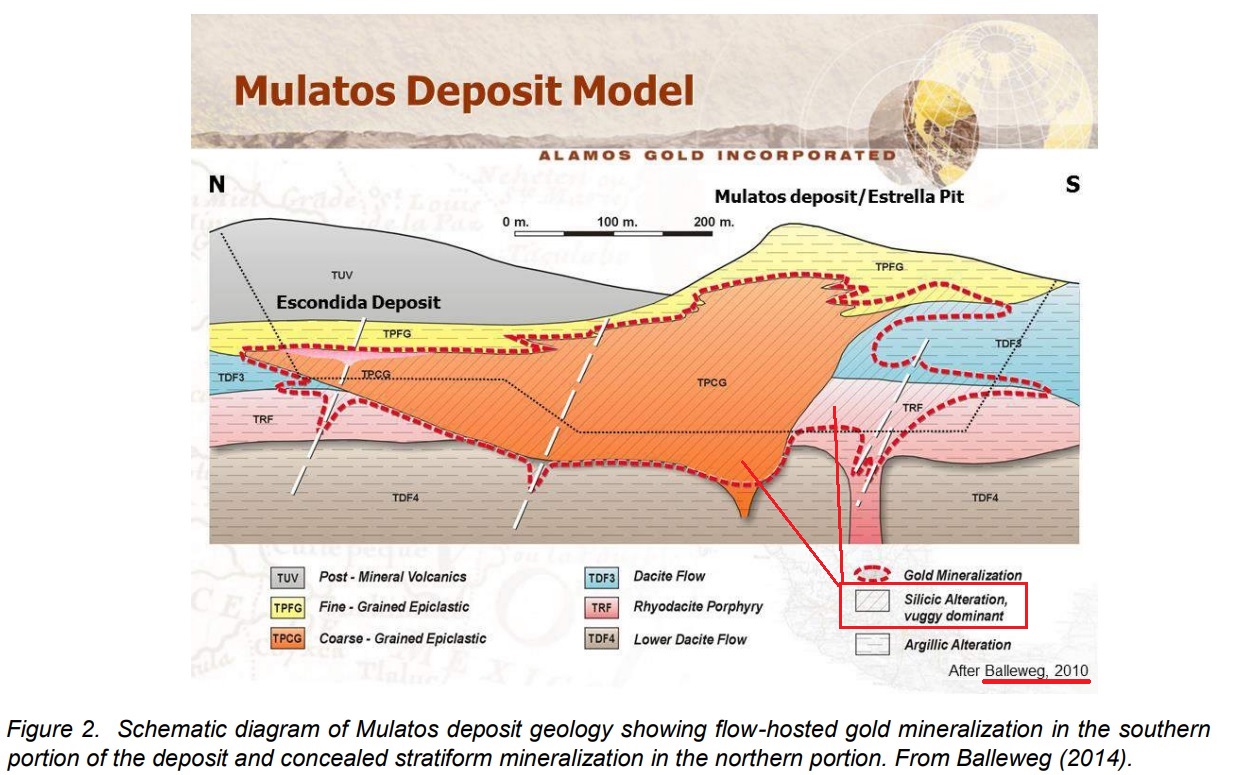 … There certainly is a possibility that one of the drill holes could have clipped a mineralized zone and proceeded to hit a feeder dike just by looking at the pictures above (granted a certain drill orientation).

I really like the story (The address, the project’s neighbors,, the people involved, very high insider ownership, financed by a major and what looks to be more positive results than the market realized. Thus I think that perhaps Aloro’s stock was punished a bit too hard on the back of not hitting eye popping numbers from the area’s first ever drill holes, but I digress, since I bought more instead of selling on impulse.

Given the close proximity to two active mining operations belonging to Agnico Eagle and Alamos Gold, I would assume that the threshold for success is much lower (thus value/oz higher) than your average exploration play since both operators already have high sunk costs involved (Mills already built). In 2011, Agnico Eagle acquired Grayd Resource Corp and its 1.27 Moz La India deposit for $275 M. The deal included a large land package, near term targets and a higher gold price, but they had to cough up $158 M to get it up and running (now partly sunk costs for Agnico Eagle).

I don’t know what exact chance of success Aloro Mining has of finding even a small satellite deposit for one of the local big boys to acquire. Every additional economic ounce that is found in the district will be worth a lot more for Agnico and Alamos since they already have the infrastructure (sunk costs).  Given that the La India transaction was done at over $200 per resource ounce, I would argue that Aloro’s market cap of $4.65 M with signs of a hidden Escondida type system, and a fully funded follow up drill campaign in the works, isn’t pricing in much of anything. Also keep in mind that these first targets just covers a small part of their claim block, and its all located in the top tier Mulatos district.

I simply very much like the Risk/Reward, even if the potential prize would theoretically be a small satellite deposit, because I think any deal valuation would be higher than the norm on a dollar per ounce basis as well as the threshold for success being much lower. If they find something akin to another Mulatos, well that would be worth… A lot more.

Note: This is not investment advice. Always do your own due diligence. I am not a geologist or an investment adviser. I cannot guarantee the accuracy of the information in this article and encourage everyone to do their own due diligence. I did not get paid by any entity to write this article. I own shares in Aloro Mining and might thus be biased. I may buy or sell shares at any time. This is a high risk/high reward case and not for the feint of heart. Junior mining shares can have extreme volatility and have low liquidity. Do not bet the farm whatever you do!