This is a very simple case with the best driver there is: It’s just so damn cheap…

Deep-South Resources is a Canadian listed junior with its flagship project located in Namibia. Even though Namibia might sound scary it is actually one of the better jurisdictions in Africa according to the Fraser Institute. Since I am not really a copper guy I want to see an investment case so simple that even I feel like I can’t mess up the risk/reward. In the case of Deep-South it’s remarkably simple because it’s just so incredibly cheap. On paper the asset has an After Tax NPV of $1,648 B and an IRR of 42.1% given a copper price of US$4.00/lb (Right now copper is actually trading for US$4.59/lb).

Now I have read a variety of opinions regarding why it’s so cheap. Anything from metallurgy being untested (bio-heap leach) to questions about power and water. The company recently appointed Dr. Marinez Bellange as a Special Advisor to the company in regards to “Bio Leaching”. This tells me that the company is serious about pushing the project up the value chain and as far as I know Bio-Leaching could (should?) work. As for the the other questions I simply don’t have the answers. All I can say is that there seems to be no active rivers or population centers at/near the project so it does look like a pretty good place to build a mine. Lastly, the total resource is 3.5B lbs of copper in the Indicate Category and 2.2B in the Inferred Category, which at the end of the day is simply a “tonne” of copper. I simply can’t see this being practically worthless with no chance in hell of becoming a big mine…

On that note Red Cloud Securities has a Target Price of $2.00/share for Deep-South Resources. Given that shares are trading at $0.205/share as of today (June 7) the “risk” to the upside is obvious. Red Cloud could be off by 50%, to the downside, and it would still be 400% of gains left until “fair value”.

The leverage to any additional “tweak” should be obvious given that, theoretically, a one percent increase, in terms of chance of Haib becoming the mine it is “on paper”, would be worth over C$16.5 M (which is more than half of the current Market Cap). A ten percent increase is C$165 M.

I believe that copper has a very bright future due to rising demand (EV revolution etc) and supply might have a difficult time keeping up. Since I am far away from an expert on copper I prefer to play a copper bull via simple cases. Something being dirt cheap like Deep-South Resources is ideal since it almost guarantees I can’t really be making a mistake (overpaying for something).

Digging Into The Presentation…

Investment Case in The Words of The Company: 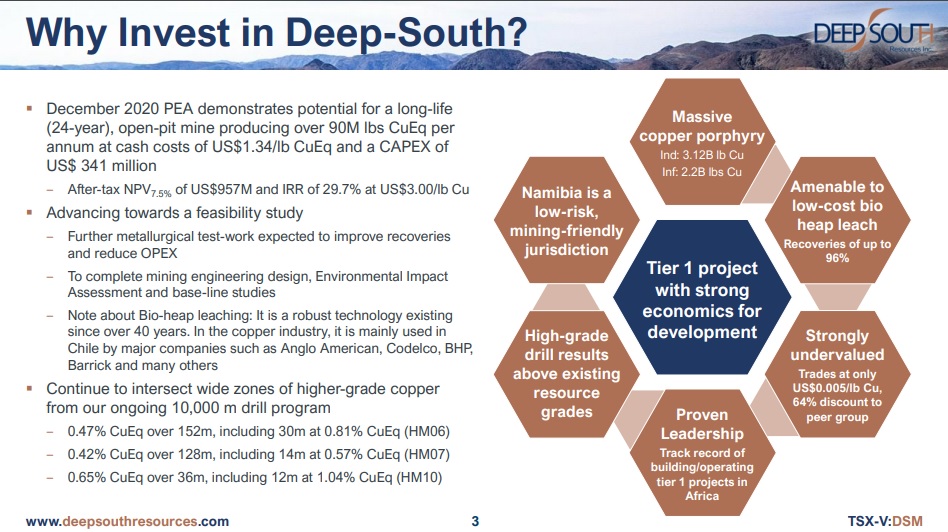 The important thing here is not what the company argues that it has but what is priced in. Obviously the market does not agree with the slide above, right now, but I think the market is way too bearish. Again, if there was no shot in hell that this could be a mine then the market might be “efficient” but this is a lot of copper and copper is in a bull market. If there is even a 10% chance of this becoming a mine then the shares ought to be significantly undervalued at these levels. 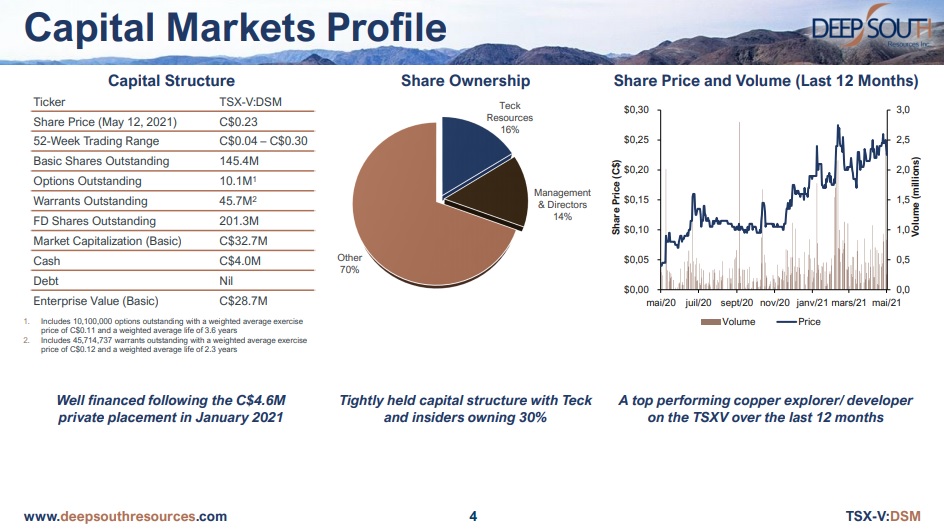 The company has a decent cash position, pretty high insider ownership and Teck as a significant shareholder. Teck is a major mining company and was previously the operator of the project. It is my understanding that Teck pulled away from the region when the bear market in metals hit. Regardless I think it is noteworthy that such a mining house still has a large stake in the company. 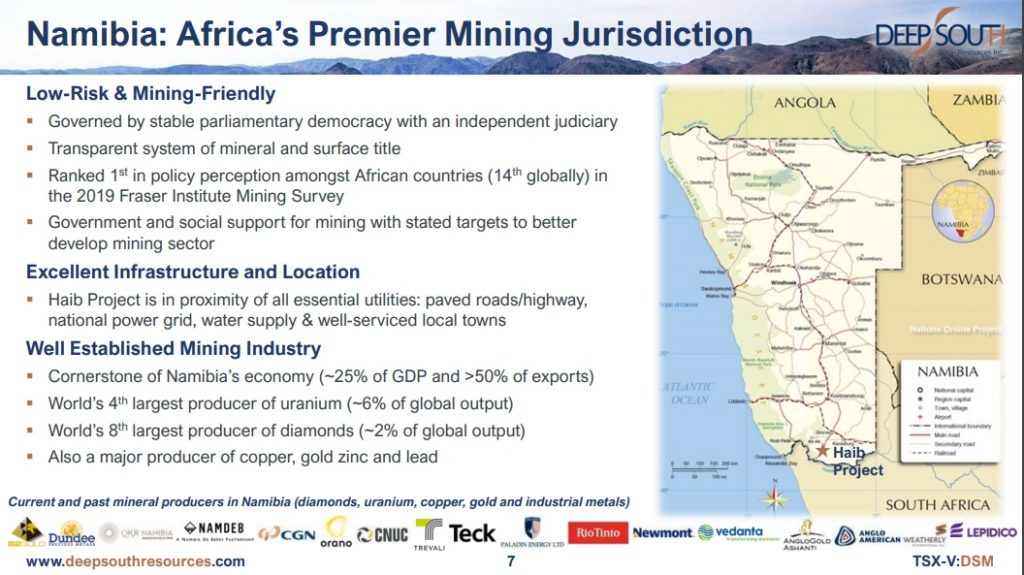 As was touched on earlier Namibia is one of the best places to be in Africa and the country has a pretty rich history of mining.

The Haib Project Itself: 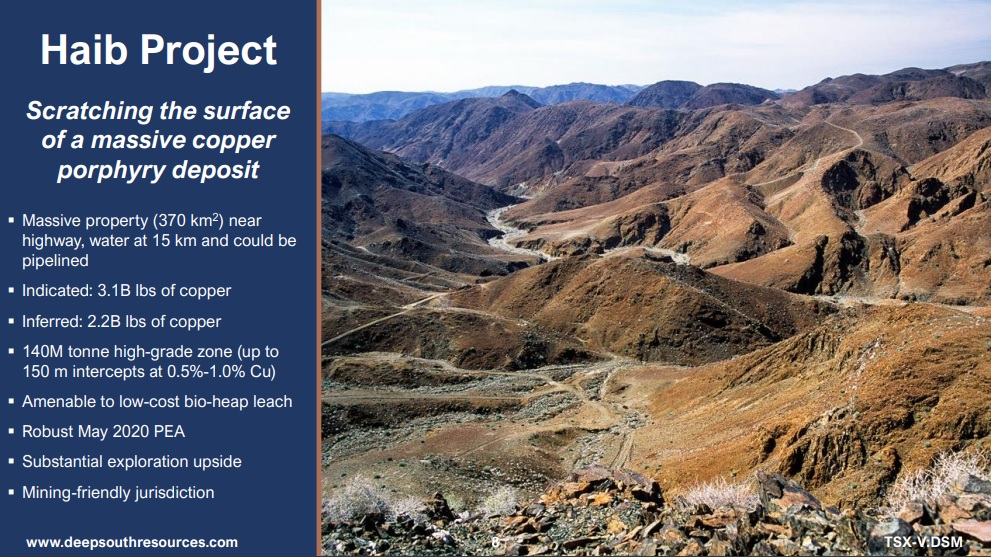 As can be seen in the slide above it is not a populated area and ought to be a pretty good place to host a mine. Haib contains a very large amount of copper and there is a distinct high-grade zone which opens up some flexibility. Infrastructure seems to be well above average as well:

As you can see there are a couple of mines nearby and the Haib project looks to perhaps even be better situated than said mines. In short I can’t see any red flags in terms of infrastructure/location. 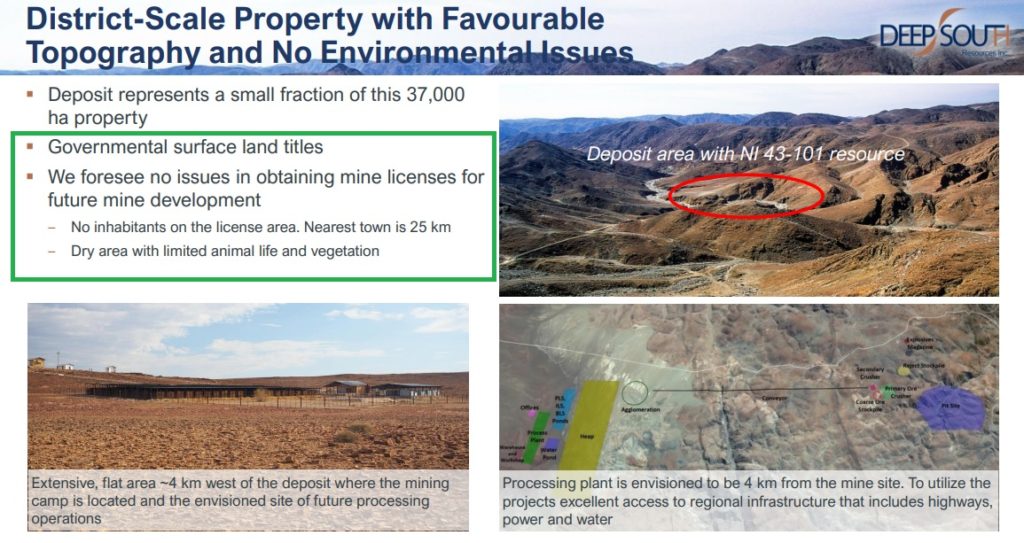 … “The company foresees no issues in obtaining mine licenses for future mine development”. This is obviously a big deal and I personally have no reason to believe this not to be true. It really is getting difficult to explain the rock bottom valuation. 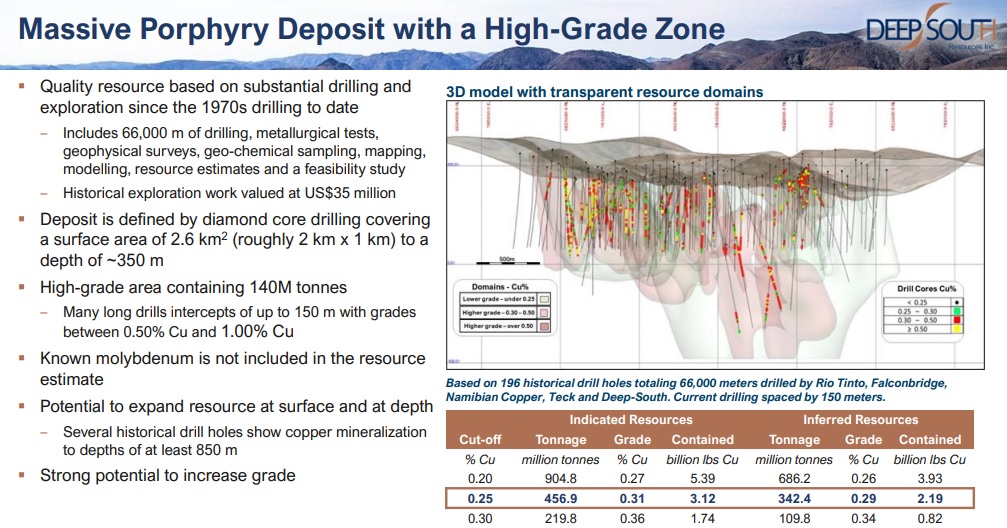 What I really like about Haib is that there is in fact a high-grade zone which opens up for some flexibility. Maybe a smaller but more robust mine could be an option? Maybe the molybdenum portion, which is not included, makes this even better than it already looks? Maybe the company can even make the deposit bigger, and have the high-grade zone as an economics booster, given that the resource could potentially be expanded at surface as well as at depth?

It is my understanding that the company has a much better grasp on what controls the high-grade zone nowadays (compared to when Teck drilled it). Maybe the company can drill up a bigger and higher grade portion with this new understanding?

In short I think there are a lot of ways to increase and/or distill value at Haib. 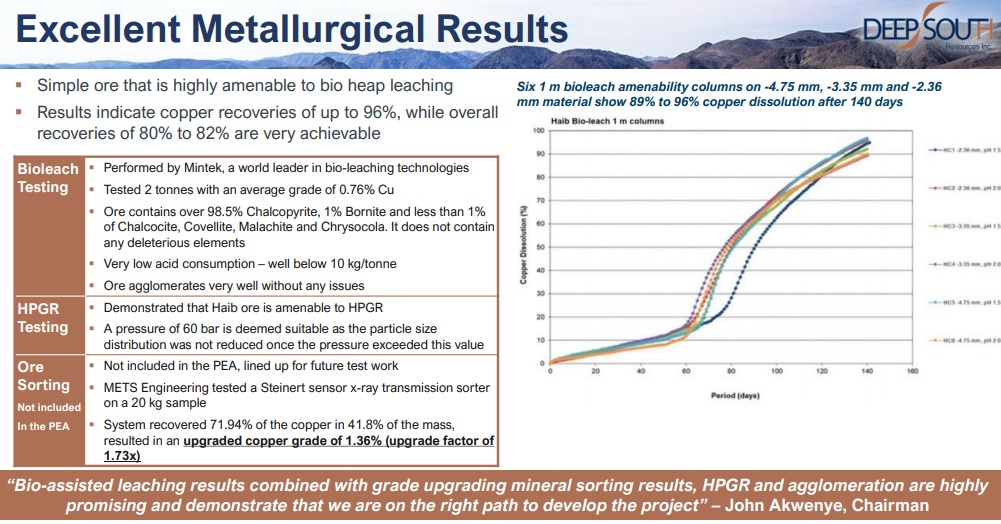 Metallurgy might be one of the bigger (biggest?) value drivers and as mentioned earlier the company has brought on a special advisor with an impressive resume:

“It has appointed Dr. Patricio Martinez Bellange as a Special Advisor on bio assisted leaching and mining. Dr. Martinez was Director of Hydrometallurgical and Biotechnological Processes at CodelcoTech, a technological subsidiary of Codelco, the largest copper mining company in the world.”

Personally I think that the project will get better with time since the company seems highly motivated to actually unlock this sizeable deposit. There simply isn’t too many large copper deposits around that are close to surface as well as being in a relatively good jurisdiction. Every one percent increase in terms of chance of development adds a LOT of intrinsic value relative to the abysmal Market Cap. 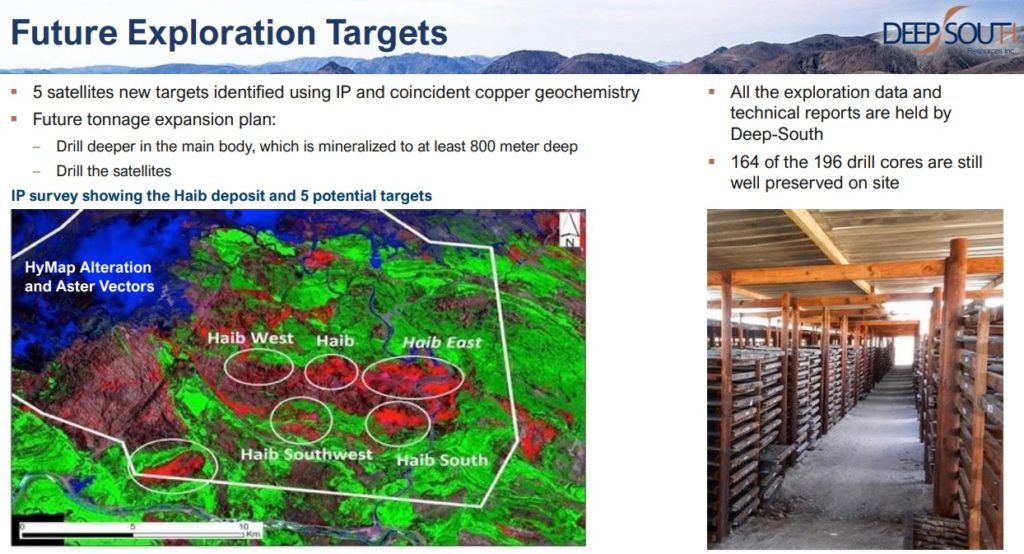 Typically when one buys a junior that is trading for less than C$30 one is hoping for a potential “ten bagger” from blue sky exploration success. The very thankful thing with Deep-South is obviously the fact that, on paper, “blue sky” is already in hand given that the face value is over >$1 B as we speak. Finding a deposit worth over $1 B might happen once in a blue moon (aka very low chance of happening). In other words the “miracle” of a big discovery is already in hand and now it’s just a matter of waiting for the company to further de-risk it and the market to start appreciate it. With that said the company has several additional targets which could further jack up the value. Regardless if these targets are explored in the short term it is something that most majors want to see since I have heard a couple of junior mining executives say “Always leave some blue sky for the acquirer”.

Suffice it to say that the company is on the way to crystallize and unlock even more value. Infill drilling, further metallurgical test-work and studies/assessments. Once this project reaches Feasibility Study level then the stock will simply look even cheaper in my book.

It’s not a tier #1 deposit. It’s not the best jurisdiction in the world. BUT, it’s certainly worth more than C$30 M. I do love stories where the risks are clearly to the upside and it’s more a matter of WHEN rather than IF a company should revalue higher. It is also quite rare to see a company so cheap that even if it goes up 400% it would still be quite hard to look call it overvalued.

Personally I expect to see shares of Deep-South simple start trending higher for real one of these days because that ought to be the path of least resistance given that there is no rational reason that I can see for the company to be this cheap. On that note I think that there has been free trading shares hit the market since a week ago which might have resulted in some “artificial” selling pressure recently.

Lastly, I think the chart below is aligned with my expectations since it appears that price has been bumping its head on major resistance line. When price finally gets through this resistance line I don’t expect it to go back down unless there would be some kind of market crash that brings everything down for a while. Personal expectations are a future “multi bagger”:

(I like major break outs that could lead to big moves) 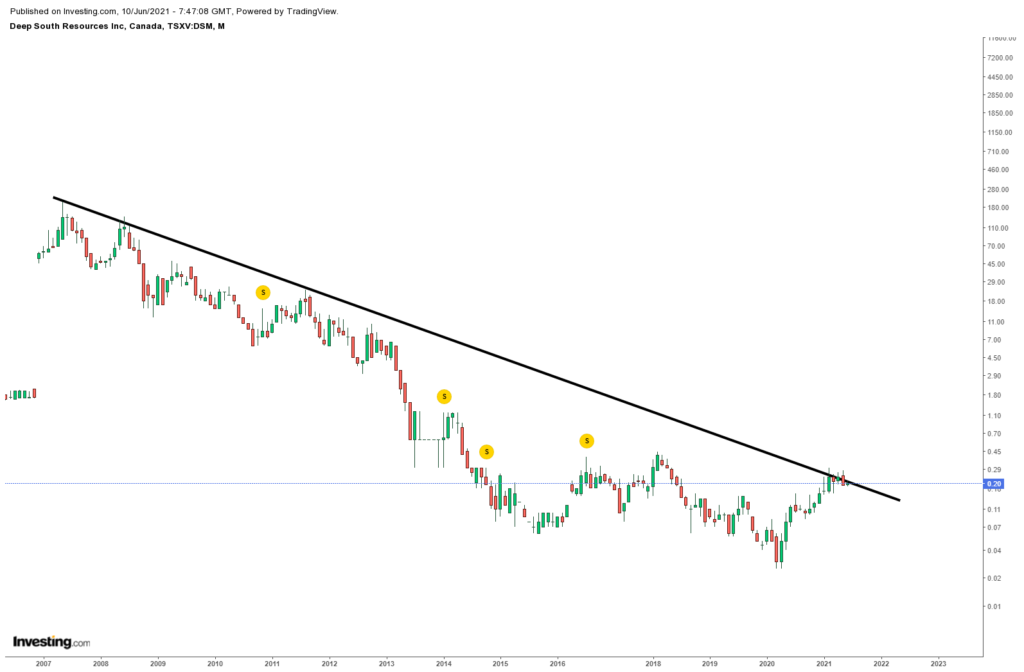 I have bought shares in the open market and honestly I see this as a “fire and forget” case where I can just check in one day and hopefully see a good return. Again, it’s so cheap that I can’t come up with many scenarios what would make the current MCAP look expensive. As always, never bet the farm on a single company. It’s not a huge position for me

Note: This is not investment or trading advice. I own shares of Deep-South Resources and the company is a banner sponsor. I cannot guarantee the accuracy of the content in this article. Always doe