Holes SLM22-001 and SLM22-011 were part of the first-pass diamond drilling of two of the >250 exposed mineralized structures cross-cutting favourable host rocks and surrounding one or more molybdenum-copper porphyry centers within the mineralized area observed at the Silver Lime Project. These high-grade intercepts show that surface mineralization continues to depth and the preliminary select assays indicate that base and precious metal grades increase with depth.

“The greater than 47% combined base and precious metal content of the Grizzly CRD intercept is the highest-grade result recovered from the Silver Lime Project to-date and puts the Silver Lime Project on the map for high-grade CRD projects globally”, said Core Assets’ President & CEO Nick Rodway. “This CRD mineralization fits well into the Porphyry-CRD continuum model that we are revealing through drilling and gives us a much better understanding of the system’s plumbing network. We look forward to good results from the remaining drill holes and integrating what we’ve learned in 2022 into our future drill targeting for the additional >250 exposed CRD occurrences at Silver Lime.” 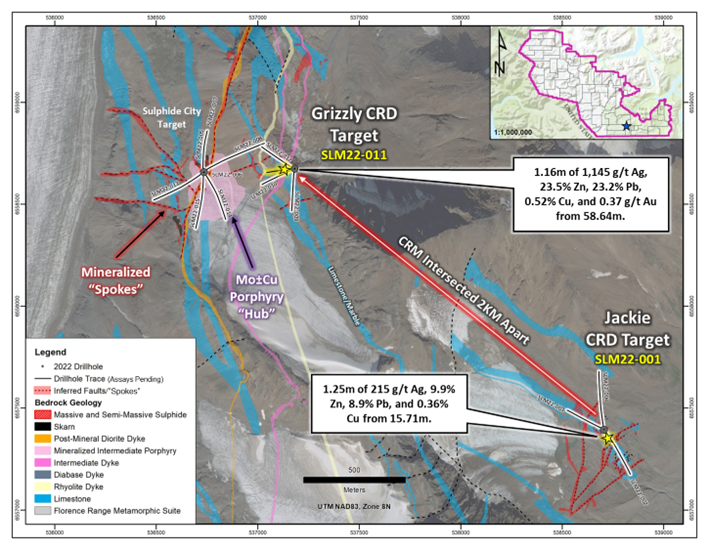 About Rushed Samples from the Jackie and Grizzly CRD Targets

Samples from two drill holes (SLM22-001 and SLM22-011) representing classic CRD mineralization and textures were rushed for assay in order for the company to confirm near surface grade and to compare these values to visual mineralization estimates and portable XRF values obtained in 2022. These early assay results will aid the geological modelling process in terms of defining metal zoning patterns and linking mineralized structures (“spokes”) in the subsurface in anticipation for the 2023 drilling campaign. The 2022 diamond drilling program has been concluded with a total of 5,355 meters drilled at the Silver Lime Porphyry-CRD Project.

All recovered drill core was transported by helicopter to the core logging facility in Atlin, BC for processing. Down hole surveys were conducted on all drill holes upon termination, using a Reflex Gyro Sprint downhole survey tool equipped with azimuth positioning capability. Drill core was typically sampled over two-meter intervals and occasionally reduced in areas of higher visual sulphide mineralization. Core samples were cut in half with an electric core saw, bagged, labelled, sealed, and submitted to ALS Minerals preparation facility in Whitehorse, YT with the remaining core stored in Atlin, BC. Half core samples were finely crushed and sieved to <75 microns. Samples were then shipped to ALS Geochemistry in North Vancouver, BC where they were analysed for gold by fire assay with an AA finish, over limits for Ag, Pb Cu and Zn and additional elements were analysed using four acid digestion with an ICP-AES or ICP-MS finish.

About the Silver Lime Porphyry-CRD Project

The Silver Lime Porphyry Carbonate Replacement Project is hosted in carbonate rocks of the Florence Range Metamorphic Suite (ca. 1150Ma). Target limestone and marble host rocks are intercalated with upper amphibolite grade metapeltic rocks, quartzite, and amphibole-bearing gneiss. The protoliths to the metasedimentary units include continentally derived clastic strata and platform carbonate, whereas the amphibole-bearing gneiss is interpreted as probable basaltic flows, sills, dykes, and tuffaceous units related to early rifting of the ancestral North America continental margin (i.e., Mihalynuk, 1999). Younger felsic to intermediate intrusive rocks are also widespread within the project area and range from Triassic to Eocene in age. Widespread Eocene magmatic activity was associated with Cordillera-wide, brittle strike-slip faulting. Eocene volcano-plutonic centres in the western Cordillera are known to host porphyry, skarn, and epithermal-type mineralization extending from the Golden Triangle in NW BC to the Tally-Ho Shear Zone in the Yukon (>100 kilometers).

Three well-defined target areas exist at the Silver Lime Porphyry-CRD Project and include the Jackie, Sulphide City, and Grizzly targets. The Jackie Target represents a distal expression of Ag-Pb-Zn-Cu CRM that consists of numerous massive-to-semi massive sulphide occurrences measuring up to 30 metres long and 6 metres wide and comprise an approximate area of 400 metres by 380 metres, within the extensive 6.6-kilometre by 1.8-kilometre mineralized zone that remains open in multiple directions. Many sulphide occurrences at Jackie are clustered and hosted within NE-SW trending faults and fault splays, proximal to undeformed felsic dykes oriented sub-parallel to faulting. These fault-hosted sulphide bodies are interpreted as “spokes” that typically broaden at depth and express continuity back towards a causative intrusion. The Sulphide City Zn-Cu±Ag Target is characterized by multiple semi-massive to massive sulphide occurrences measuring up to 40 metres along strike and 8 metres wide. In 2022, detailed geological mapping and diamond drilling discovered a Mo-Cu-bearing and causative porphyry intrusion. The Sulphide City Target boasts an average surficial grade of 13.3g/t Ag, 0.34% Cu, and 3.9% Zn (83 rock samples) that remains open. The Grizzly Ag-Zn-Pb-Cu-Au CRD Target represents the largest, untested surficial exposure of CRM globally. Carbonate replacement manto, chimney, and dyke-contact skarn mineralization at Grizzly are observable at surface across open strike lengths of up to 1 kilometer, and at widths of over 5 meters. Average surficial grade at the Upper Grizzly CRD Target yields values of 164.7g/t Ag, 0.42% Cu, 3.8% Pb, and 7.1% Zn over 450m strike length, whereas the Lower Grizzly Manto has an average graded of 70. g/t Ag, 0.36% Cu, 0.2% Pb, and 7.1% Zn over an inferred strike length of 1km.

Nicholas Rodway, P.Geo, (Licence# 46541) (Permit to Practice# 100359) is President, CEO and Director of the Company, and qualified person as defined by National Instrument 43-101. Mr. Rodway supervised the preparation of the technical information in this news release.

Core Assets Corp. is a Canadian mineral exploration company focused on the acquisition and development of mineral projects in British Columbia, Canada. The Company currently holds 100% ownership in the Blue Property, which covers a land area of111,648.8 ha (~1,116 km²). The project lies within the Atlin Mining District, a well-known gold mining camp located in the unceded territory of the Taku River Tlingit First Nation and the Carcross/Tagish First Nation. The Blue Property hosts a major structural feature known as The Llewellyn Fault Zone (“LFZ”). This structure is approximately 140km in length and runs from the Tally-Ho Shear Zone in the Yukon, south through the Blue Property to the Alaskan Panhandle Juneau Ice Sheet in the United States. Core Assets believes that the south Atlin Lake area and the LFZ has been neglected since the last major exploration campaigns in the 1980’s. The LFZ plays an important role in mineralization of near surface metal occurrences across the Blue Property. The past 50 years have seen substantial advancements in the understanding of porphyry, skarn, and carbonate replacement type deposits both globally and in BC’s Golden Triangle. The Company has leveraged this information at the Blue Property to tailor an already proven exploration model and believes this could facilitate a major discovery. Core Assets is excited to become one of Atlin Mining District’s premier explorers where its team believes there are substantial opportunities for new discoveries and development in the area.

On Behalf of the Board of Directors
CORE ASSETS CORP.

Neither the Canadian Securities Exchange nor its Regulation Services Provider (as that term is defined in the policies of the CSE) accepts responsibility for the adequacy or accuracy of this release.

Statements in this document which are not purely historical are forward-looking statements, including any statements regarding beliefs, plans, expectations, or intentions regarding the future. Forward looking statements in this news release include expectations regarding the pending core assays, including speculative inferences about potential copper, molybdenum, gold, silver, zinc, and lead grades based on preliminary visual observations from results of diamond drilling at the Silver Lime Project; that preliminary results of drilling have exceeded the Company’s expectations; the Company’s plans to further investigate the geometry and extent of the skarn and carbonate replacement type mineralization continuum at Silver Lime through additional field work and diamond drilling; the proposed diamond drilling program planned for Silver Lime in 2022; that drilling efforts will aim to confirm and extend certain targets and mineralization on the property; that the Company’s exploration model could facilitate a major discovery at the Blue Property; that the Company anticipates it can become one of the Atlin Mining District’s premier explorers and that there are substantial opportunities for new discoveries and development in this area. It is important to note that the Company’s actual business outcomes and exploration results could differ materially from those in such forward-looking statements. Risks and uncertainties include that expectations regarding pending core assays based on preliminary visual observations from diamond drilling results at Silver Lime may be found to be inaccurate; that results may indicate Silver Lime does not warrant further exploration efforts; that the Company may be unable to implement its plans to further explore Silver Lime and, in particular, that the proposed diamond drilling program planned for Silver Lime may not proceed as anticipated or at all; that drilling efforts may not confirm and extend any targets or mineralization on the Silver Lime; that the Company’s exploration model may fail to facilitate any commercial discovery of minerals at the Blue Property; that the Company may not become one of Atlin Mining District’s premier explorers or that the area may be found to lack opportunities for new discoveries and development, as anticipated; that further permits may not be granted in a timely manner, or at all; that the mineral claims may prove to be unworthy of further expenditure; there may not be an economic mineral resource; that certain exploration methods, including the Company’s proposed exploration model for the Blue Property, may be ineffective or inadequate in the circumstances; that economic, competitive, governmental, geopolitical, environmental and technological factors may affect the Company’s operations, markets, products and prices; our specific plans and timing drilling, field work and other plans may change; we may not have access to or be able to develop any minerals because of cost factors, type of terrain, or availability of equipment and technology; and we may also not raise sufficient funds to carry out or complete our plans. Additional risk factors are discussed in the section entitled “Risk Factors” in the Company’s Management Discussion and Analysis for its recently completed fiscal period, which is available under the Company’s SEDAR profile at www.sedar.com. Except as required by law, the Company will not update or revise these forward-looking statements after the date of this document or to revise them to reflect the occurrence of future unanticipated events.