I thought I would do quick post on my latest thoughts on Eloro Resources. For some background you can find my initial piece on the company HERE.

Eloro Resources came out with the first assays from Iska Iska on November 18: LINK

The first assays were no barn burners but showed that there was potentially low grade, bulk minable stuff in the first breccia pipe:

I haven’t run the economic value numbers but I remember this snippet from Bob Moriarty’s piece on Eloro Resources:

Other snippets from the news release were as follows:

What is probably even more interesting was the information in the news release that followed on November 24: LINK

… So hole DHK-14 went straight into what looks to be a much larger breccia pipe (The Santa Barbara Breccia Pipe): 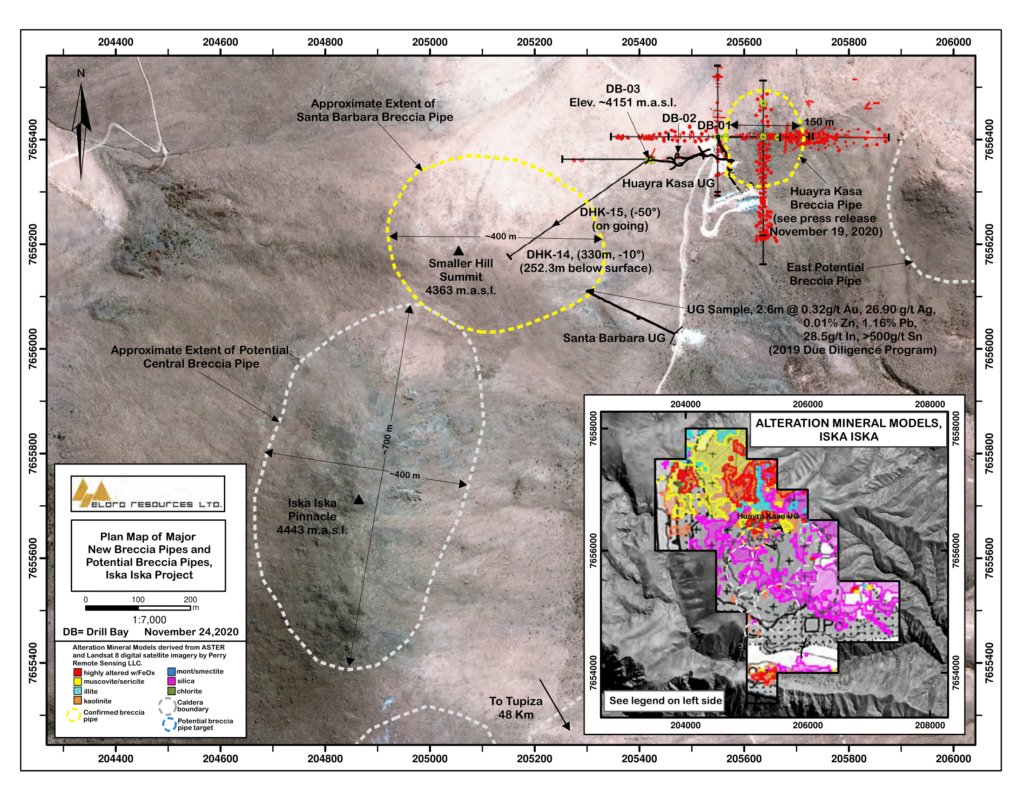 Further description of the hole:

“Drill Hole DHK-14 drilled at -10 degrees to the southwest of the underground workings from Drill Bay #3 intersected almost 180m of silicified and mineralized breccia from 151m to 330m in the Santa Barbara Breccia Pipe. This hole stopped in well-mineralized breccia at the maximum limit of the drilling range and only penetrated approximately 50% of the breccia pipe. Assays are pending. A field XRF analyser indicates the presence of lead (Pb) and zinc (Zn) predominantly before and in the periphery of the breccia transitioning to copper (Cu), bismuth (Bi) and tin (Sn) in the central part. However, the numbers measured are not quantitatively accurate hence cannot be reported. Note that silver (Ag) and gold (Au) cannot be detected by this instrument.”

Iska Iska surely looks to host a smorgasbord of metals as Quinton noted in his presentation of the company. What the grades will be in this 180m interval I sure have no idea. It is of course positive that the company seems to have identified several larger breccia pipes and interestingly this Santa Barbara pipe sounds a bit different compared to the breccia pipe that was tested first:

Tom Larsen, Chairman and CEO of Eloro, commented: “The discovery of a new breccia pipe and outlining of a number of potential targets for breccia pipes is highlighting the potential for Iska Iska to host a significant bulk mineable polymetallic deposit. We are currently preparing access roads to enable additional surface drilling to further evaluate the new pipe as well as drill-test other potential breccia pipe targets.”

Dr. Bill Pearson, P.Geo., Chief Technical Advisor for Eloro commented: “The alteration in the Huayra Kasa breccia pipe just east of the underground workings is principally argillic and sericitic which is typical of higher level mineralization in a porphyry-epithermal complex. In contrast, the alteration in the newly discovered Santa Barbara Breccia Pipe is principally silicification. This and the presence of copper, tin and bismuth in the core of the breccia indicates that we are getting closer to the magmatic-hydrothermal source. Furthermore, given the strong association of gold with bismuth in the high-grade zones at Huayra Kasa, gold is likely to be present. It is also very likely that there is a major tin-copper-bismuth porphyry system beneath these breccia pipes; this possibility will be tested in the next round of surface diamond drilling. Meanwhile we are excitedly waiting for more assay results.”

… We know that Iska Iska is probably a hybrid system composed of both porphyry as well as epithermal and we know that epithermal systems tend to be barren or at least pretty low grade in the higher levels. Why I point this out is that it sounds like the mineralization that has been intercepted in the Santa Barbara breccia pipe sounds to have been formed at deeper levels than Huayra Kasa (the first, smaller breccia pipe). This begs the question if there is chance that at least the epithermal mineralization might be better here since it could be closer to the boiling zone level(?). It’s also worth noting that the company believes there might be major tin-copper-bismuth porphyry system beneath all these breccia pipes…

Note: This is not investment advice. Always do your own due diligence. I am not an investment advisor, geologist nor am I a mining engineer. This article is highly speculative and it’s just my opinions. I can’t guarantee accuracy. I own shares of Eloro Resources . I can buy or sell shares at any time. Also the company is a passive banner sponsor. Assume I am biased and make up your own mind as always.