A long term investor who wants outsized returns ought to welcome periods with depressed prices with open arms yet 95% are only happy if their stocks go up in PRICE.

What might be easy to forget is that the better and longer one sows the bigger the final harvest.

Both scenarios assume an initial investment of $10,000 and in one scenario that was the perfect buy (lowest prices in two years) and in the other it “appears” to be a terrible buy given that prices continue to decline for say one and half year. Both scenarios assume four small purchases before the market has become fairly priced with an Expected Return of 0%: 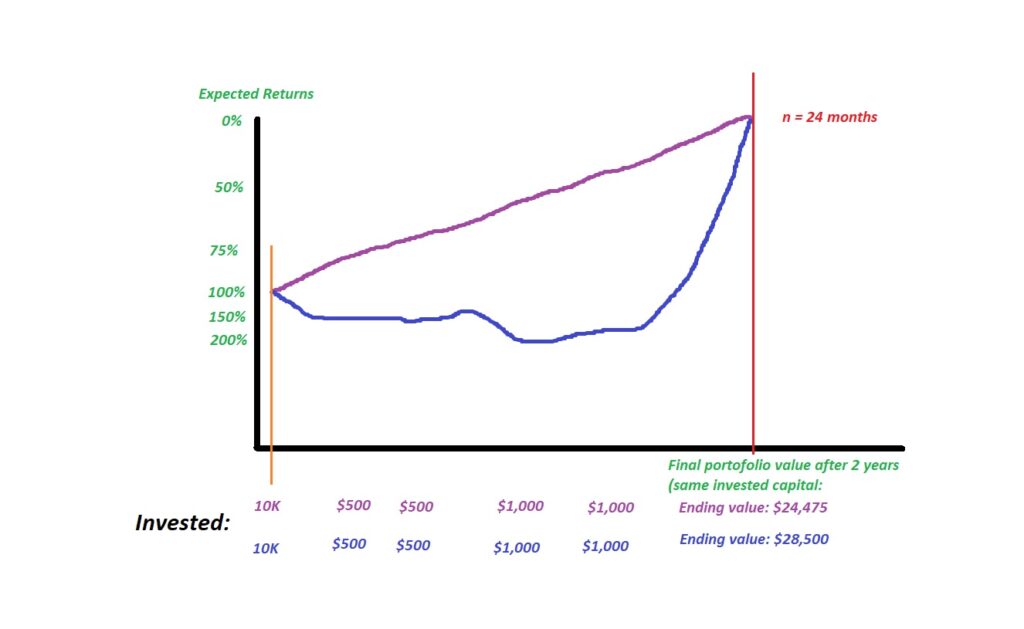 Purple scenario which looks like the “perfect market” for an investor and is basically what everyone and their mother hopes to see:

Blue scenario which looks awful and where a typical investor would feel like a total moron for most of the two years:

… Do you see the power of compounding and why every dip buying matters over the long run? Do you think you need to take enormous risk and go all in on grassroot plays to get rich? What do you think is the most probable way to get rich to begin with? Do you happen to know some lets say miners that might probably return 37.21% over the next 12 months and realize that it’s way easier to get rich that way than to bet big on a maiden drill campaign where chance of success is like 5%?

Q: Where does the highest returns come from?

A: From buying at the lowest levels possible.

On that note have you noticed the amount of people throwing in the towel, selling and walking away from juniors right now?

Do you think they are the in the 5% of people who actually beat an index over the long term?

It is important to note that the return difference of each scenario would widen much farther in favor of the “Worst scenario” the more an investor would be willing and able to purchase more shares during the entire period. Why? Because except for the starting time the “Perfect Scenario” always had lower Expected Returns on any additional purchase while the “Worst scenario” even had increasingly higher Expected Returns during the first half of the period right up until PRICE bottomed.

“The Perfect Scenario” is not the optimal one from a pure return perspective but the thankful part of an ever increasing market is that it becomes almost fool proof for a long period of time. When people see their portfolio go up every day it will lead to one thinking one is a genius and will encourage more risk taking (buying more).

“The Worst Scenario” is obviously the one that will lead to the greatest returns. BUT, in reality said scenario (opportunity) will be wasted 95% of the time because only about 5% of people will see it as a blessing and not a curse. Most people will give up and sell out when the future Expected Returns are the highest unfortunately. Note that “holding on” for 6 or 12 months doesn’t really matter and the mistake of selling would be almost equally bad.

The pay off (outperforming the “Perfect Scenario” ONLY happens if an investor holds on for as long as it takes before PRICE catches up with VALUE and in this case it means holding on for the entire two year period. There is not even a participation trophy for “almost getting there”. In other words this scenario is optimal from a compounding perspective but typically leads to sub-par returns due to 95% of people getting shook out before the pay off.

An example of what I saw today on twitter:

… Another one bites the dust.

Would realize that the increasing divergence between PRICE and VALUE provided an opportunity curve that is going EXPONENTIAL and would (should) ramp up the purchasing exponentially as well. 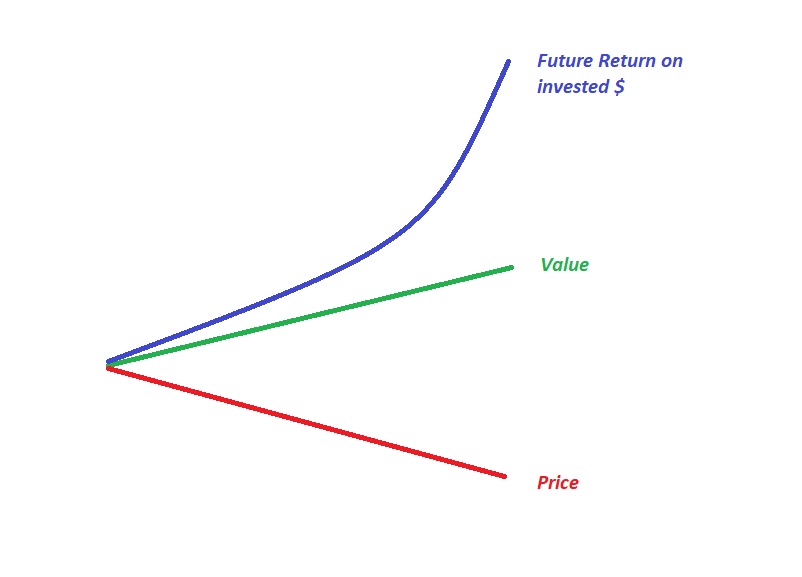 The superior investor therefore WELCOMES extended periods of DECLINING PRICES as long as VALUE does NOT go down in the same pace. And if you haven’t noticed the gold sector is doing near record cash flows while PRICE of miners and juniors alike has gone down…

Hopefully you will now understand why I don’t really care about A) When we get a final bottom or B) How much lower we can go since I already know that these levels will already provide far above average long term returns. This is why you tend to see me go ballistic in terms of bullishness and ramp up my gathering of dry powder MEANWHILE most retail investors are running around with their hair on fire and getting ready to call it quits.

“Sun Tzu said: The good fighters of old first put themselves beyond the possibility of defeat, and then waited for an opportunity of defeating the enemy.”

On that note we are indeed at valuation levels where defeat (overpaying for almost anything) is almost “beyond a possibility” today:

Stop looking at the daily swings in gold, silver or mining companies. The gold juniors especially are already waaaaaay undervalued relative to the price of gold and are pretty much pricing in $1,300 gold already. Furthermore, what does it matter if company X sells for 10, 20 or 30 cents on the dollar? It would still be a no brainer buy. If your average junior is selling for $0.20/share and fair value is closer to $0.80/share then who cared if it gets cut in half to $0.10/share if it is one day going to $0.80/share?

PERFECTION is not NEEDED. Not making OBVIOUS MISTAKES is an ability that is always needed however. Selling cheap is the cardinal sin of all compounding… so DON’T DO IT!

It is quite normal to have moments of weakness but the best thing to do then, before taking any action, is to remind oneself of the concepts outlined in this article.

(Using Bear Creek Mining as a proxy for junior valuations/sentiment):

One thought on “Always Wishing For Rising Stocks Makes no Sense”